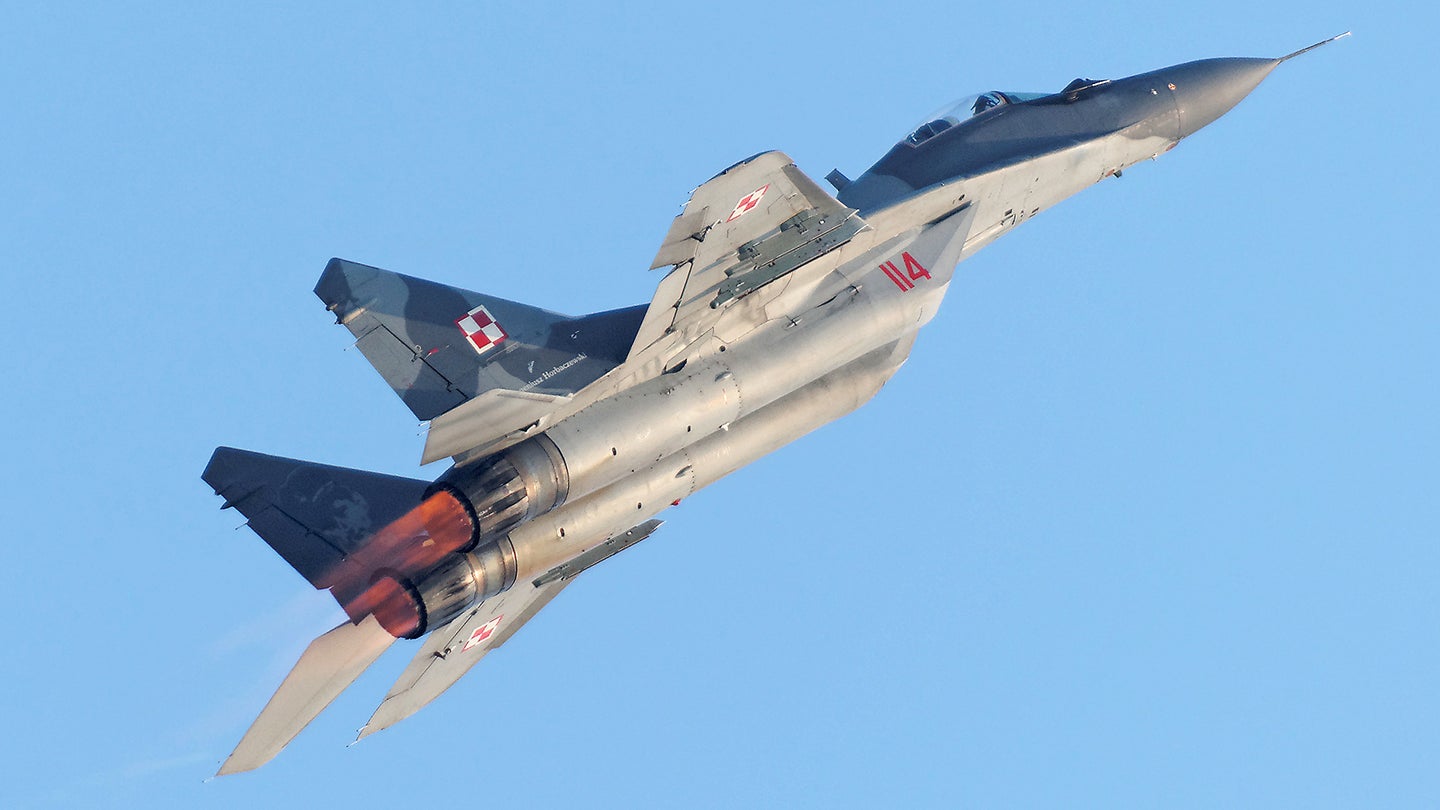 Days after a European Union-announced plan to supply Ukraine with fighter jets fell through upon statements from Polish, Slovakian and Bulgarian defense officials, it appears the U.S. government is still encouraging a transfer of jets to Ukraine despite Russian warnings.

Speaking on CBS’s Face the Nation, Secretary of State Anthony Blinken said a potential transfer of Polish Air Force MiG-29s to Ukraine would get a “green light” from the U.S. government to proceed. Blinken added there are ongoing negotiations with the Polish government, with particular attention to how Poland would replace those donated jets, potentially with American fighters.

“We are looking actively now at the question of airplanes that Poland may provide to Ukraine and looking at how we might be able to backfill should Poland decide to supply those planes,” Blinken told reporters separately on Sunday during his visit to Moldova. “I can’t speak to a timeline but I can just say we’re looking at it very, very actively.”

Our previous analysis of the rumored plan involving multiple nations donating aircraft to bolster the Ukrainian Air Force noted its looming logistical and political hurdles, to the point of it being totally unrealistic. Politico reported Saturday that negotiations are now focused on Warsaw only and revolve around the U.S. providing U.S.-built fighters to replace its MiG-29s.

Despite Secretary Blinken’s endorsement on Sunday morning, the Polish government is swiftly labeling any claims that Poland has or will provide its MiGs to Ukraine as “fake news.” The Chancellery of the Polish Prime Minister’s Twitter account has habitually replied to claims with a quote tweet from the Polish Armed Force emphasizing Polish MiG-29s are not in Ukraine and stating explicitly:

Poland won't send its fighter jets to #Ukraine as well as allow to use its airports. We significantly help in many other areas.

Apart from the need to backfill Poland's fighter inventory if their roughly 28 MiG-29s go to Ukraine, there’s the incredibly real problem of Russia considering such a move as active participation in the war by a NATO country.

NATO Article 5 being what it is, the threat of escalation beyond Ukraine is real. If the Russian government made good on its declaration and attacked Poland in some manner, even via a cyberattack, things could quickly turn into a larger war between Russia and NATO. That likely played no small part in the original rejection of the E.U. fighter transfer plan by the relevant NATO members last week.

Still, Secretary Blinken’s statements on the Sunday morning news circuit could indicate a split between how badly the U.S. government wants to reinforce Ukraine’s air combat capabilities and how much NATO’s ‘eastern flank’ countries are willing to risk doing it. These countries certainly have aircraft suitable for transfer, but independent of incurring a Russian response in the short term, they could also be wary of giving away a large chunk of their air power when they might need them to deter Russia or even for a potential conflict with Russia. In fact, so outrageous were the claims by major media outlets and some Ukrainian officials early in the week in regards to how many aircraft would be donated that some air arms would have been left with no fighters at all for their own defense. We pointed out how unrealistic this was at the time.

Renewed discussion about the MiGs came the day after Ukrainian President Volodymyr Zelensky made an impassioned plea for more support, including fighters, during a Zoom call with more than 280 members of Congress.

Given the Russian declaration that would seemingly rule out flying new jets into Ukraine directly, it appears the overt transfer of fighter aircraft could become a ‘red line’ red line for Russia in terms of potential escalation.

We’ve already seen massive overt shipments of ammunition and weapons by road convoys over the Polish border. Polish Defense Minister Mariusz Blaszczak tweeted a picture purportedly showing a convoy of ammunition sent to Ukraine in the war’s first days, though there have been few direct public acknowledgments of this vector for resupply as Russian rhetoric against them has grown. Combined with an ongoing surge of cargo flights into Rzeszow, Poland, not far from the Ukrainian border, it would appear that for now, Russia is begrudgingly stomaching NATO reinforcement by land. DOD has said on more than one occasion in the past few days that they've seen no attempts by Russia to intervene with these shipments

Regardless, it is widely understood that this is how most NATO-supplied weapons are entering the country.

But how does one get potentially several dozen MiGs over the border without being detected or even flying them at all, and do so covertly enough that it does not invite a widening of the conflict? Partially disassembling them and trucking them in is a possibility, but, then again, the sudden appearance of new MiG fighters in Ukraine and the disappearance of them from Poland certainly wouldn’t go unrecognized by Russia.

With all this in mind, it still seems unlikely that Poland will hand over its full MiG-29 fleet to Kyiv, at least at this time and at the scale currently being discussed. Additionally, even if it decided to do it today, there could be major timeline and logistics obstacles. NATO equipment would likely have to get removed from the aircraft for one. Then the aforementioned issue of just getting them into the country is becoming more tumultuous a proposition with each passing day. This, along with the fact that western allies claim that Ukraine’s air defense capabilities remain remarkably intact, and the reality that the Russian air threat has not dictated the course of the war, makes providing a couple of dozen old MiGs to Ukraine less of a strategic imperative than other initiatives aimed at supporting the country’s ability to whether Kremlin’s military onslaught.

Then again, if the U.S. can make the deal sweet enough, maybe Poland would take the risk. Such an arrangement could include U.S. fighter aircraft being temporarily forward-deployed to Poland to make up for the gap left by the MiG-29 force. While U.S. fighter capabilities in the region are already overstretched in some regards, this would help alleviate any air defense shortcomings Poland would experience from such a deal.

In their place, the decades-old MiG-29s could be offset by surplus F-16s provided by the United States. They could come from U.S. stocks, which would not be as straightforward in the near term as some would think, or from an ally that has surplus F-16 aircraft for sale. Much of the latter have been snapped up by other NATO members as of late who are transitioning from old Soviet-era gear and by the U.S. private adversary air support marketplace.

New order Block 70 F-16s are now in very high demand with a multi-year waiting period. Even if some orders could be diverted to Poland, which is highly unlikely as countries who are waiting for their F-16s have their own pressing military challenges to deal with, they would not start showing up for quite some time.

No matter where they would come from, it will take some time to get them delivered and get Polish crews trained to fly and support them. Poland flies the much more modern Block 52+ F-16C/D. While the type has much in common with earlier block Vipers, they are far from totally the same and would require specific training and logistical support to reach full operational capability in Polish hands. The U.S. also has Block 52 aircraft, but they are some of the youngest in the USAF's inventory and have been upgraded to U.S. standards. These aircraft serve in critical operational roles, as well as flying with the USAF Thunderbirds. Aside from the Thunderbirds, forking over these aircraft would disrupt USAF air combat capabilities until they could be replaced by F-35 or F-15EX fighters, and they still are not identical to the F-16s Poland flies today.

The other possibility is that the U.S. offers to speed up Poland’s F-35 procurement of 32 aircraft and even offers those additional aircraft at a discount in exchange for the MiG-29s. This would be tricky, but it could be enticing enough to Poland to invite more risk in the short term for extra high-end combat capability in the long term.

It’s also possible that MiG-29s could be acquired from a different source and then transferred through Poland. What country would want to get involved at all by forking over its MiG-29s for this conflict is a big question. And nothing like this would be able to occur in the very near term.

Finally, as we have stated previously, this entire conversation becomes more realistic when smaller numbers of aircraft are discussed. For instance, the idea that Poland could send say a half dozen MiG-29s to Ukraine instead of liquidating its entire fleet is far more palatable and wouldn't have the massive operational impacts we are discussing here. Offsetting that smaller loss in combat capability is simply far easier to contend with.

Regardless, according to Poland’s own statement at the highest level, the country has no intention of sending its MiG-29s to Ukraine. Until that sentiment changes totally, this entire exercise, now in its second round, remains hypothetical.