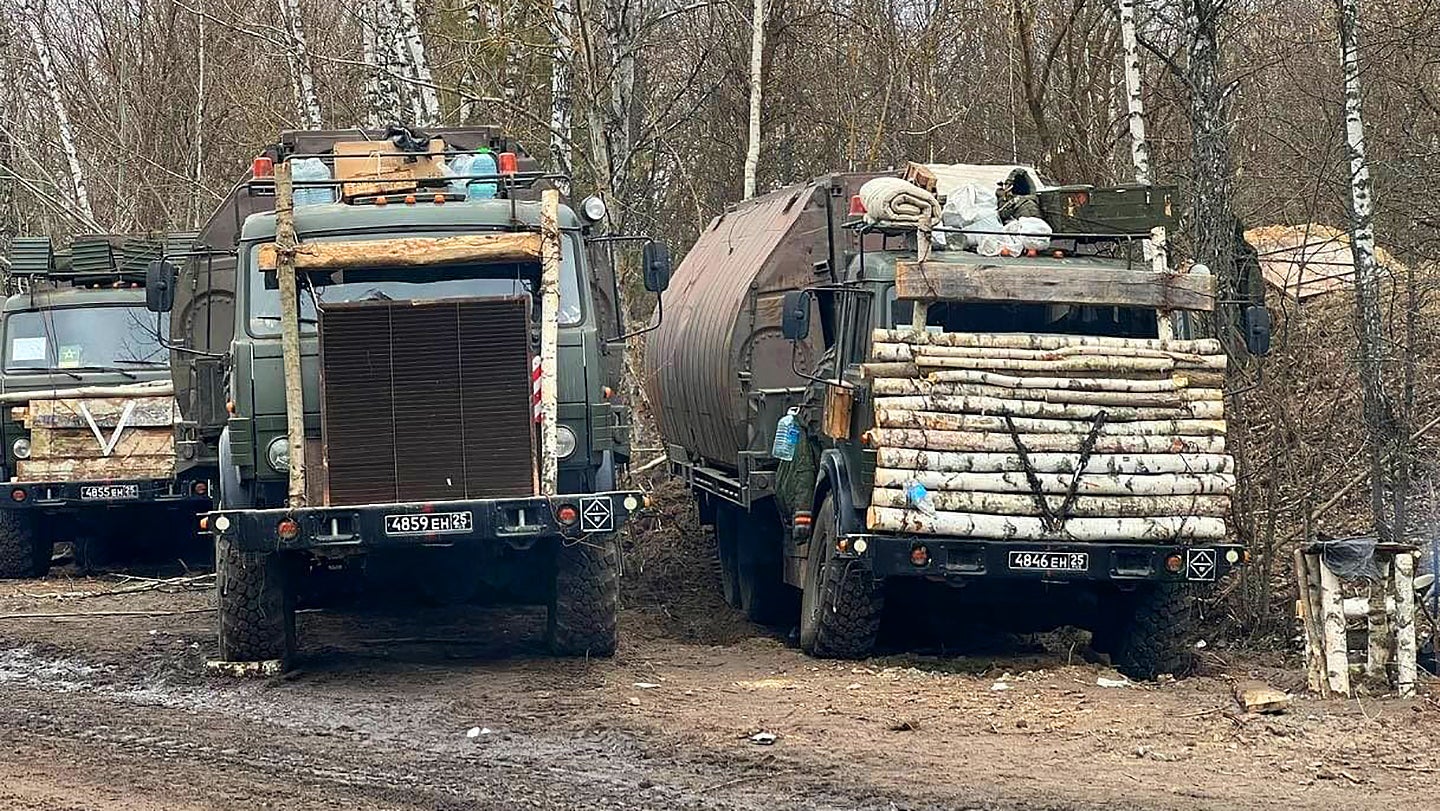 Ukrainian roads have quickly become a killing ground for Russian convoys moving through hostile territory amid a reportedly worsening logistics situation. While losses of heavily armored tanks and armored personnel carriers to anti-tank weapons are piling up, far less fortified vehicles are vulnerable even to small arms fire. Losses of light and unarmored vehicles trying to ferry men and materiel to advancing Russian forces are also increasing. As a result, Russian drivers have gotten creative in fortifying their trucks for the deadly roads leading ever deeper into Ukraine.

Images of Russian KAMAZ trucks appeared Saturday showing logs stacked on the front bumper as additional improvised armor. Crews even managed to retain their distinctive “V” markings seen on Russian vehicles in the sector. Other vehicles use wood boards and junk metal to protect their most vulnerable frontal areas.

The three vehicles look to be carrying PMP pontoon bridge elements, a valuable logistics asset and one of the Ukrainian forces’ preferred targets alongside fuel trucks. A PMP bridge was likely set up over the Pripyat River in the Belarusian side of the Chernobyl Exclusion Zone in the final days leading up to the war.

The logs themselves appear cut from trees right behind the vehicles and are likely intended to protect the trucks’ radiators from small arms fire. The last thing any Russian vehicle crew wants is to survive an ambush only for the truck to overheat and break down nearby.

This is far from the first instance of Russian troops trying to improve their vehicles’ armor for their invasion of Ukraine. At least one captured T-72 tank had sandbags on its turret in a vain attempt to augment its explosive reactive armor blocks. Russian units have also carried logs onboard as a means to help vehicles escape the suffocating mud long feared by observers as a threat to the Russian military's off-road operations. This is in addition to the cage-like improvised armor that began appearing on Russian tanks before the invasion in an attempt to counter-drone and anti-tank guided-missile attacks.

As Russian forces have advanced into Ukraine, their supply lines back to friendly borders in Russia, Crimea, and Belarus have grown longer and thus require greater security.

Reports both from western defense officials and Russian leaks indicate varying levels of disarray in these supply lines, some of it indicative in the miles-long traffic jam of trucks and armor north of Kyiv seen stalled on satellite imagery. There is also an ongoing effort within Ukraine to dismantle road signs to confuse invading Russian forces and inviting wrong turns into waiting ambushes.

Russian forces’ inability to secure these supply routes have made for a flood of videos and images documenting the charred and mangled wreckage after Ukrainian attacks. These attacks have come from Ukrainian ground forces, resistance fighters, as well as Ukrainian air raids using combat aircraft, helicopters, and Bayraktar TB-2 drones. Some ambushes have left many vehicles lightly damaged or abandoned on Ukrainian roads for fighters or even civilians to find and claim later.

It’s not immediately clear how effective the logs will be in protecting Russian trucks’ radiators, or whether the added flammable material will make the trucks more vulnerable to incendiary attacks with partisans’ Molotov cocktails. Still, using wood as additional armor is not a novel concept, and considering how vulnerable overstretched elements of the Russian Army are to ambushes, anything is better than nothing.

In the end, necessity is the mother of invention and even if some logs will keep your radiator intact long enough to escape, that is probably worth the effort.