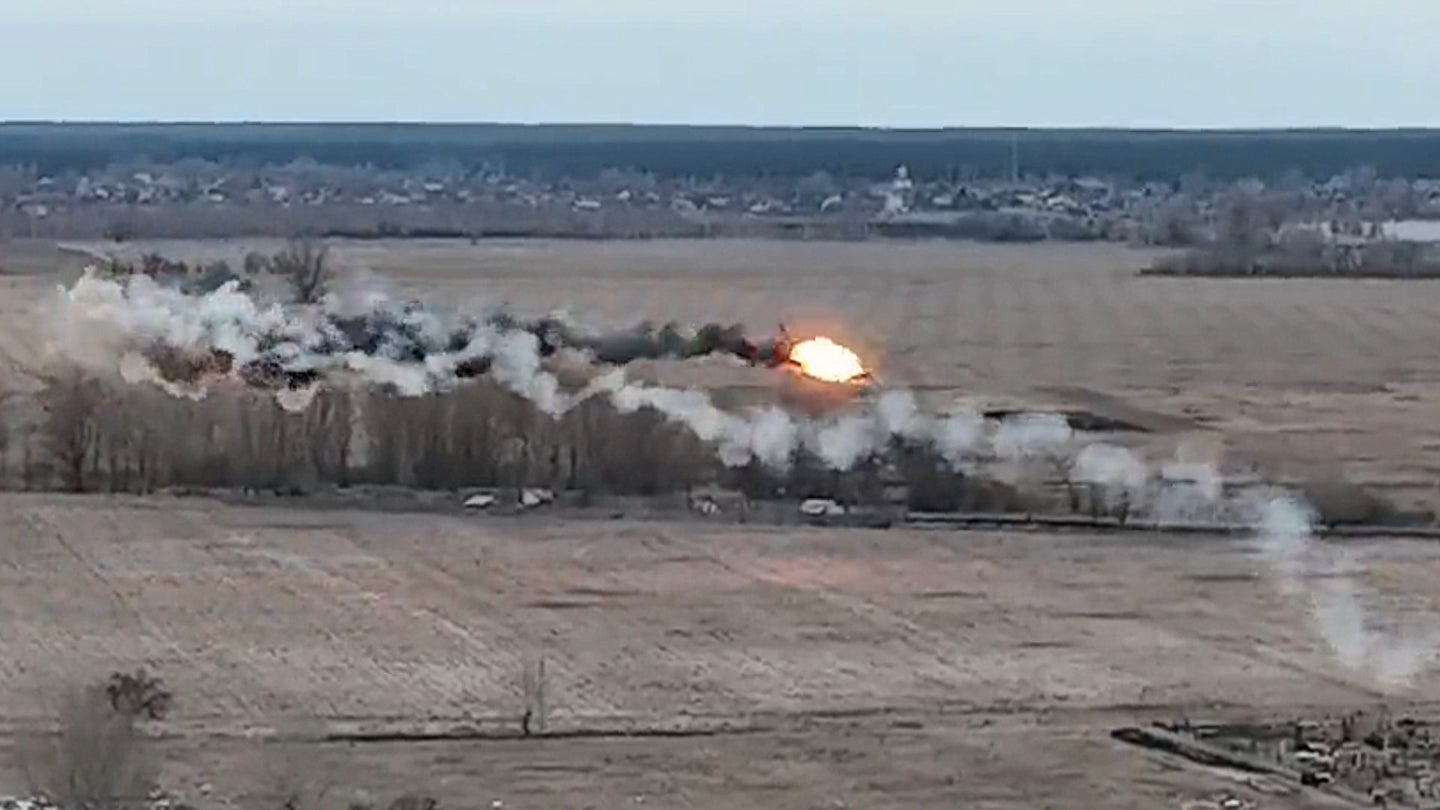 After 10 days, it remains clear that the skies over Ukraine are very much contested, with a notable spike in reported Russian aircraft losses just in the past day or so. In general, Ukrainian forces, as well average civilians, continue to resist the invading forces and the Kremlin increasingly lays siege to major population centers. Before getting into the latest news, you can get up to speed on the state of the conflict in our previous rolling coverage here.

You can find our latest rolling coverage of the conflict in Ukraine here.

While it remains difficult to independently verify losses of any kind, personnel or materiel, on either side of Russia's war in Ukraine, it's fairly clear that the Russian military has lost numerous combat jets, helicopters, and at least one small drone since yesterday. The team of researchers at the Oryx blog are confident based on the open-source information available that the past day or so has seen Russia lose a number of combat jets - one Su-30SM Flanker, two Su-34 Fullbacks, two Su-25 Frogfoots - as well as two Mi-24/Mi-35 Hind and two Mi-8 Hip helicopters, and an Orlan unmanned aircraft. There could be more, of course, and these are on top of already steady reported losses. Even if these numbers are off a bit one way or the other, it's clear Russia is rapidly shedding its air combat force over Ukraine.

Various videos and pictures have emerged online of these reported shootdowns.

There are unconfirmed reports that one of the pilots of one of the downed Su-34s was an individual with combat experience from the conflict in Syria. This aviator, who survived the shootdown and is now in Ukrainian custody, may be one of those arrayed around Russian President Vladimir Putin and his Syrian counterpart Bashar Al Assad in a picture previously taken at Russia's Khmeimim Air Base outpost in Syria.

It's not clear how Ukrainian forces have been shooting these aircraft down in each instance, but shoulder-fired surface-to-air missiles, also known as man-portable air defense systems (MANPADS), appear to have been a major factor. A video, seen below, is circulating online now that reportedly shows one of these weapons hitting one of the Hind attack helicopters that was shot down recently. Former Ukrainian President Petro Poroshenko also recorded a video today with a Ukrainian soldier named Albert who reportedly brought down the Su-30SM with an Igla-series MANPADS.

MANPADS, including U.S.-made Stingers, have been important components of recent shipments of weapons and other materiel to Ukraine. A total of 14 cargo planes loaded with military assistance from various countries landed in areas bordering Ukraine on Friday, according to The New York Times.

MANPADS have also been seen in the hands of Ukrainian troops providing cover for today's evacuations from the city of Irpin, which lies just to the west of Kyiv.

At negotiations earlier this week, Russia has agreed to allow the safe passage of civilians out Irpin, as well as Volnovakha and the port city of Mariupol, both in the southeastern portion of the country. Ukrainian officials have accused Russia of failing to uphold the planned ceasefires, which led to the complete collapse of the evacuation from Mariupol. Russian shelling also reportedly cut a rail line leading out of Irpin, forcing many to flee on foot instead of by train as had been planned.

The Kremlin, for its part, has claimed Ukrainian authorities in Mariupol of preventing civilians from leaving, ostensibly accusing them, without evidence, of holding them hostage for use as human shields against Russia's continued bombardment of that city. British authorities have already assessed this to be nothing more than an attempt to deflect from criticism its increasingly indiscriminate attacks in Ukraine that have led to mounting civilian causalities.

Fighting is ongoing elsewhere across Ukraine. The negotiations this past week did not produce any plans for a more general ceasefire. There are also continuing reports of protests and other civil disobedience in cities that Russian forces now occupy, such as Kherson and Melitopol in the south, even in the face of possibly violent crackdowns.

Israeli Prime Minister Naftali Bennett has reportedly met Putin in Moscow over the conflict in Ukraine. There are reports that Ukrainian authorities asked Bennett to try to act as a mediator.

Earlier in the day, Putin had a televised sitdown with flight attendants from the country's airlines, which have now been hit with massive international sanctions. The Russian President said that those sanctions and others that have been slapped on Russia were tantamount to a declaration of war. In the course of his remarks, he added there are no plans currently to impose martial law in Russia and that he would consider any country or international organization, such as NATO, imposing a no-fly zone over Ukraine as being a party to the conflict. Yesterday, NATO formally ruled out enforcing a no-fly zone over Ukraine in spite of repeated appeals from Ukrainian officials.

Putin also took this opportunity to reiterate the completely unsubstantiated claim that Ukraine is seeking to develop nuclear weapons. This is one of the Kremlin's arguments for why the invasion was necessary.

Russian cooperation on international space programs is faltering amid sanctions and isolation over the war in Ukraine.