Recovery of the jet after its carrier landing mishap allays fears that it could have fallen into the wrong hands. 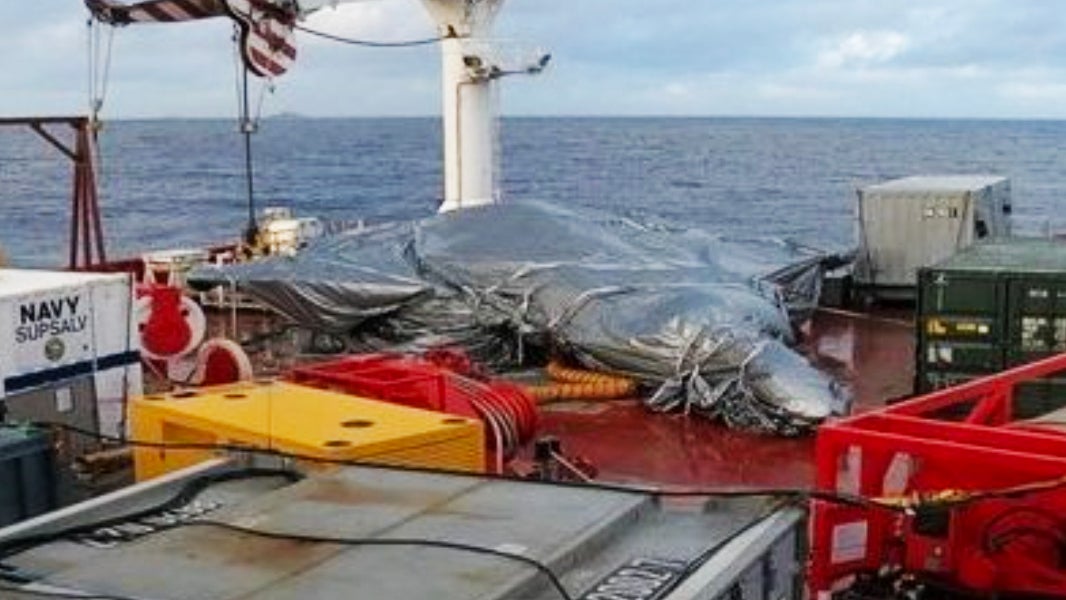 The U.S. Navy has retrieved the F-35C Joint Strike Fighter that was lost in a landing accident aboard the aircraft carrier USS Carl Vinson (CVN-70) earlier this year from the South China Sea. The service recovered the jet after bringing it up from a depth of around 12,400 feet. You can read our original coverage of the mishap here.

The aircraft was recovered yesterday by the U.S. 7th Fleet’s Task Force 75, which overseas diving and salvage units and other expeditionary capabilities within its area of responsibility, and Naval Sea Systems Command’s (NAVSEA) Supervisor of Salvage and Diving (SUPSALV). The combined team was on board the commercially owned diving support construction vessel (DSCV) Picasso. That vessel had left Okinawa on February 23 to head to the crash site.

According to USNI News, the location of the salvage operation may have been around 170 miles west of the Philippine island of Luzon, based on a notice to mariners that was issued by the Japan Coast Guard. The Navy, for its part, has not announced any details of the location.

For the recovery effort itself, the team employed a Cable-controlled Undersea Recovery Vehicle 21, or CURV-21, a tethered remotely operated vehicle (ROV) normally used to survey the seabed. The CURV-21 can also carry sonar and cameras to help locate objects of interest and in this instance, it attached specialized rigging and lift lines to the jet.

Once secured to the rigging and lift lines, the F-35C was lifted to the surface by the ship’s crane lifting hook and taken onboard Picasso. A photo released by the 7th Fleet shows the aircraft apparently wrapped in a protective plastic coating for transport.

“The task force’s expertise in rapid, scalable command, control, and communications, agile logistics, organic security, and explosive ordnance disposal was the most flexible choice for the fleet commander to respond in a timely manner,” said the head of Task Force 75, Capt. Gareth Healy.

“Ultimately, this deliberate approach resulted in the correct capabilities conducting recovery operations within 37 days of the incident. Given the unique challenges of this problem and the unique technical capabilities that NAVSEA delivered, this was an aggressive and achievable timeline.”

The Navy says the wreck of the jet will now be taken to “a nearby military installation to aid in the ongoing investigation and evaluated for potential transport to the United States.”

The fact that at least most of the wreckage has not been retrieved will be a relief to the Pentagon and the wider Joint Strike Fighter community. As we discussed in our previous coverage, there were very real concerns that some or all of the wreckage could be examined or even taken from the crash site by a hostile power, perhaps China or Russia.

“We’re certainly mindful of the value of an F-35 in every respect of what value means,” said Pentagon spokesman John Kirby, soon after the accident. “And as we continue to attempt recovery of the aircraft we’re going to do it obviously with safety foremost in mind, but clearly our own national security interests. And I think I will just leave it at that.”

The recovery also follows an apparently similar pattern to the efforts to raise to the surface a U.K. Royal Air Force F-35B stealth jet that sunk to the bottom of the Mediterranean after a takeoff mishap aboard the carrier HMS Queen Elizabeth last November.

The F-35C incident involved a ramp strike: the jet impacted the rear of the flight deck during landing and subsequently careened down the landing area before landing in the water. Seven personnel were injured, including the pilot, who was quickly recovered from the water after ejecting.

Although the F-35C tore out all four of the carrier’s arresting wires and left debris scattered across the deck, including fouling the catapult tracks, flight operations on the Vinson were up and running again within just 45 minutes.

However, in a surprising breach in protocol, soon after the crash a photo of the jet in the water and two separate videos, one of them taken from the ship’s Island Camera Room, which you can also see above in this article, appeared on social media. The Navy subsequently confirmed that all three were authentic.

The Navy will no doubt be keen to understand how these security leaks happened; it has already reprimanded one Navy officer and four senior enlisted leaders, who were expected to receive non-judicial punishments. At the same time, the service is continuing to look into the causes of the crash, which left a shadow over what was otherwise a promising first operational cruise by the Navy’s F-35C.

After steadily reducing planned F-35C squadron sizes the Navy wants to go the opposite direction now that the type’s first operational cruise is over.