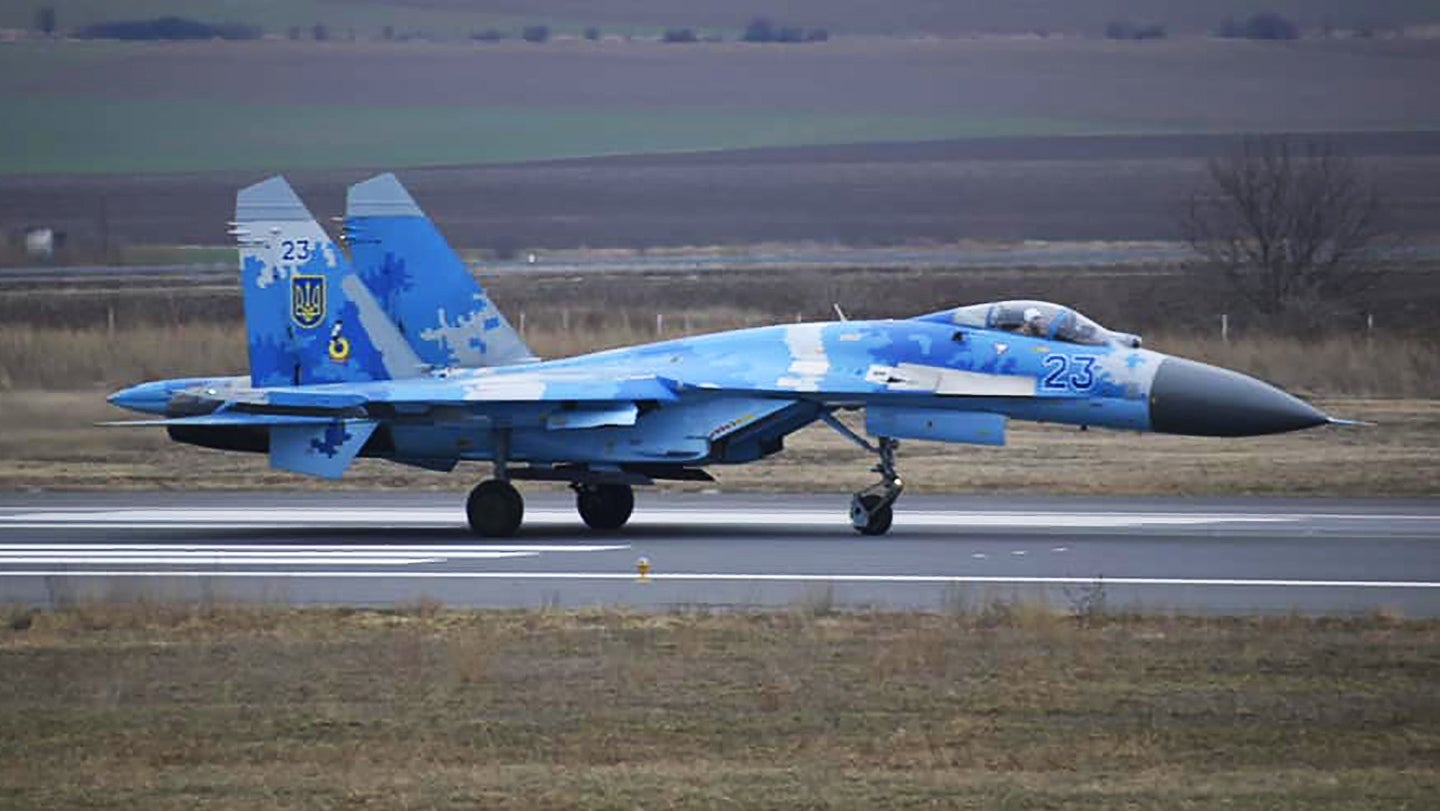 A Sukhoi Su-27 Flanker belonging to the Ukrainian Air Force has left Romania on its way back to its war-torn home. The aircraft landed in Romania on February 24 for unknown reasons. The jet's return comes as a proposed plan for European Union nations to donate dozens of fighter aircraft to Ukraine has been confirmed as a non-starter for the nations involved. A European Union official first announced the plan on February 27, but it soon became clear that the details of the deal made it increasingly implausible, as you can read about in our previous analysis on the proposal.

Romania’s Ministry of Defense said today that the Su-27 left Romania at the request of Ukrainian authorities and that it was unarmed when it departed. It was escorted to the country's border with Ukraine by two Romanian Air Force MiG-21 Lancer fighter jets. Once it crossed into Ukraine, the Flanker then met up with two unspecified Ukrainian Air Force aircraft.

Video of the Su-27 departing Romania was posted to social media today, showing the pilot dipping the jet's wings in salute immediately after taking off.

Upon landing, “the Ukrainian military pilot made himself available to the Romanian authorities, and the legal measures required in these situations will be taken,” the statement reads.

As you can see in this photo below, after the Su-27 diverted to Romania, it is fully loaded with air-to-air missiles, but it returned without any armament. This is because NATO countries will not send an armed aircraft into Ukrainian airspace as not to be dragged into the conflict. If the Su-27 had shot down a Russian aircraft while trying to return to its base, it could have resulted in a major international incident and escalation point. As such, the jet returned unarmed and required an escort of Ukrainian fighters once in Ukrainian airspace. Its missiles will likely be returned via other means, such as via Il-76 transport, as NATO has been supplying the Ukrainian Air Force with replenishments for their air-to-air missile stocks.

It’s still unknown why the Su-27 flew to Romania, but it’s possible the aircraft was unable to return to its home base after coming under Russian attack, or that its base was under siege at the time. It may be that Romania’s 95th Air Base was the nearest diversion airfield at the time and that others were recovered elsewhere within Ukraine’s borders. Other unconfirmed reports state that the aircraft's communications were disabled, while others claim the pilot attempted to defect. These are all certainly possibilities, but there is still no official statement as to why the Su-27 made its way to Romania.

While the return of the Su-27 is no doubt a welcome addition to the Ukrainian Air Force as Russia continues its assault on the country, the European Union’s (EU) proposed plan to send additional aircraft to Ukraine stalled today. Josep Borrell, the High Representative of the European Union for Foreign Affairs and Security Policy and Vice-President of the European Commission, announced on February 27 that EU nations would provide Ukraine with a military assistance package valued at 450 million Euros (over $501 million) that would allow the country to acquire additional fighter jets from unspecified EU states. Borrell indicated that these aircraft would be ones that the Ukrainian Air Force already operates so that they could get them into combat quickly.

The next day, additional details surfaced that Ukraine could receive as many as 70 aircraft familiar to the Ukrainian Air Force, indicating they would likely be MiG-29 and Su-25 jets from Poland, Slovakia, and Bulgaria. However, as The War Zone previously pointed out, the 70 aircraft figure was more than the total number of planes those countries have available. Moreso, this would leave two of these countries with none to nearly no fighter aircraft at all, as modern replacements are still some time out from arriving. Giving away your tiny tactical jet fleet isn't especially wise considering Russia has just invaded a neighbor, either.

Meanwhile, Bulgarian news outlet Novinite reported yesterday that Bulgaria’s Prime Minister Kiril Petkov called the idea “completely absurd,” stating his country did not have enough planes or parts to give away.

Polish President Andrzej Duda spoke to reporters alongside NATO Secretary-General Jens Stoltenberg at Łask Air Base in Poland where the two stressed that the alliance would not risk getting embroiled in the military conflict between Russia and Ukraine, and therefore would not be sending aircraft to aid Ukrainian forces. “NATO is not going to be part of the conflict,” Secretary-General Jens Stoltenberg said today while visiting Poland. “So NATO is not going to send troops into Ukraine or move planes into Ukrainian airspace.” Many voices including Ukrainian President Volodymyr Zelensky have also called for NATO to establish a no-fly zone over Ukraine, a request NATO and the United States have made clear would be an escalation that would drag both into the conflict. There had also been reports that missions would be actually flown from NATO countries with borders with Ukraine, specifically Poland. An outlandish claim that has now dematerialized officially.

It's not clear what state the Ukrainian Air Force is currently in, but it has clearly suffered losses. Last week, the wreckage of what appeared to be a Ukrainian Su-27 landed in Kyiv after exploding in the sky above the city. Three civilians died in the crash.

One of Ukraine's most celebrated aviators, Su-27 pilot Col. Oleksandr Oksanchenko, was confirmed today to have been killed in combat at some point during the conflict.

These are just some of the losses, there have been others in the air and on the ground.

Ukraine has a clear need for more aircraft to help defend itself. While the country has so far been able to prevent Russia from achieving air superiority, they began the conflict with a much smaller air force than their invaders. Aside from sheer numbers, Russia is capable of forward-deploying significant ground-based air defense assets, some of which can reach deep into Ukrainian territory from Russian, Crimean, and Belorussian territory, posing a risk to opposing air operations. This is in addition to shorter-range air defense systems that are already deployed within Ukraine as part of the invasion. Russia has multiple avenues for executing standoff strikes against Ukrainian airbases, radar stations, and command posts, further challenging Ukraine's counter-air operations and allowing Moscow to limit the risk to manned assets when striking targets deep within Ukrainian territory. Although, this standoff capability has proven to be less numerous and effective than many had predicted.

While the return of a Su-27 from Romania is certainly good news for the Ukrainian Air Force, it seems the plan for Ukraine to receive additional fighter aircraft from the European Union has failed, at least for now. The subsequent public comments and claims made about the size of the aircraft fleet the EU was procuring for Ukraine may have been a result of miscommunication, bluster, or even propaganda designed to boost morale like the mythical 'Ghost of Kyiv.' Maybe another source outside the EU can be worked out, but that will take time and there will be other hurdles.

Whatever the case is, aside from the lone Su-27 being returned to it, it remains to be seen if the Ukrainian Air Force will receive additional air power as its conflict with invading Russian forces drags on.