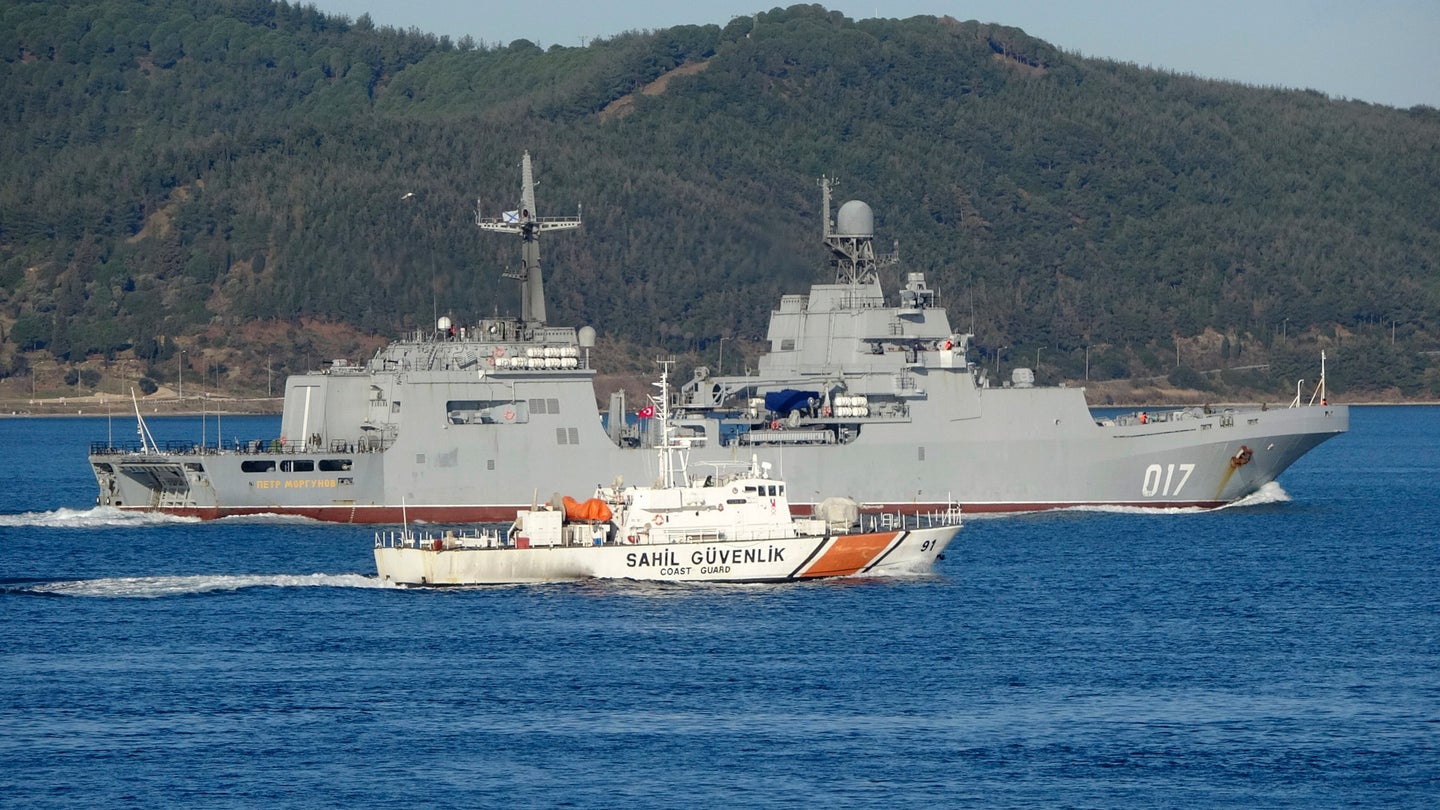 The Turkish government says it has formally imposed a ban on warships sailing into the Black Sea from the Mediterranean Sea in response to Russia's invasion of Ukraine. The only link between those bodies of water is a pair of straits that are fully within Turkish sovereign territory and are under its sole jurisdiction. This is the last in a string of extremely significant actions on the part of the international community over the fighting in Ukraine, as you can read more about in preceding rolling coverage of this conflict here.

Ukraine's Ambassador to the United States accused Russian forces of using a "vacuum bomb," a term often used in reference to thermobaric weapons, while speaking with U.S. lawmakers today. She did not elaborate on the exact type of weapon that was employed and does not appeaar to have said where it was used.

There continue to be reports about infiltrators and saboteurs being captured in and around major Ukrainian cities, including Kyiv and Kharkiv. The Ukrainian military has issued warnings to be vigilant, including for suspicious convoys flying Ukrainian flags.

A video is circulating online that reportedly showed captured Russian military rations that expired seven years ago. This comes amid persistent reports that the Kremlin is having difficulties supplying its forces in Ukraine. U.S. officials have warned that Ukrainian units may ultimately face similar issues their supply lines cannot be maintained as the conflict drags on.

The U.S. government has informed its Russian counterparts that it will expell 12 people assigned to Russia's Mission to the Unitions Nations from the United States. These are individuals who are known to be intelligence agents "who have abused their privileges of residency in the U.S. by engaging in espionage activities that are adverse to our national security," a spokesperson for the U.S. Ambassador to the United Nations said. "Today’s action has been in the works for several months." This does, of course, come as the U.S. governent ramps up sanctions and other retalitatory action against the Kremlin over its invasion of Ukraine.

In another knock-on effect from Russia's invasion of Ukraine, Finnish lawmakers plan to start a formal parlaimentary debate on possibility of the country joining NATO. Finland, which has strong ties with the alliance, has long shied away from trying to join over the potential political fallout with the Kremlin. Just in the past week, support for NATO membership has significantly grown in the country, as well as in neighoring Sweden, another nation with a long history of largely neutral foreign policy.

Turkish President Recep Tayyip Erdogan and Turkey’s Foreign Minister Mevlut Cavusoglu both confirmed the closure of the Bosphorus and the Dardanelles to warship from any country, citing provisions in the 1936 Montreaux Convention, in separate remarks this evening. Cavusoglu had indicated that a formal decision on this matter was imminent late yesterday, which came a day after Ukrainian President Volodymyr Zelensky had Tweeted out his thanks for Turkish authorities taking this step.

"When Turkey is not a belligerent in the conflict, it has the authority to restrict the passage of the warring states’ warships across the straits," Cavusoglu said. Yesterday, he stressed that the Turkish government's position was that what has been happening in Ukraine is a "war" rather than a "conflict," a difference in language that matters when it comes to the Montreaux Convention.

“Turkey will use its authority over the Turkish Straits under the 1936 Montreux Convention to prevent the Russia-Ukraine 'crisis' from further escalating," Erdogan said. He further added that he would not abandon ties with Russia, where he has cultivated a significant personal relationship with President Vladimir Putin, or Ukraine.

How this closure may actually impact Russian military activities in and around the Black Sea, or those of any other country, remains to be seen. The Montreaux Convention gives the Kremlin an important loophole in this particular case given that it is so-called "riparian" state with a Black Sea coastline and therefore has different rights from "non-riparian" countries.

"If the warship is returning to its base in the Black Sea, the passage is not closed," Cavusoglu, which is in line with the terms of the Convention. "We adhere to the Montreux rules."

In principle, this could mean that, if Russia wanted to, it could simply reassign ships to its Black Sea Fleet and then declare that they are "returning" to their base.

Regardless, the Russian Navy already has a considerable force in the Black Sea now, which includes ships that were deployed there in advance of the invasion. This includes a flotilla of six large amphibious ships, three from the Baltic Fleet and three from the Northern Fleet, that entered the Black Sea earlier this month. Those vessels, among others, have almost certainly been contributed to reported amphibious operations along Ukraine's Black Sea coastline, as well as its coasts along the adjacent Sea of Azov to the north.

Still, the Turkish government closing its straits to even some warships is a rare move that underscores its view of the severity of the situation overall. Even with the fact that this closure impacts all countries and contains a loophole Russia could exploit, together with Erdogan's instance that his country remains committed to its relationships with Russia, it is hard not to see this as an expression of displeasure with the Kremlin's invasion and the regional impacts it is having. A number of commercial warships have been hit by apparent errant Russian missiles or other munitions in the Black Sea, or in Ukrainian ports along its coastline, already.

U.S. Secretary of State Antony Blinken thanked Turkey for taking this step, further underscoring the view that this decision is primarily intended to target Russia.

The Ukrainian Armed Forces has issued an official tally, along with the infographic seen below, of how many Russian Iskander-M ballistic and Kalibr cruise missiles they say have struck targets in the country so far. The total figure is lower than what the U.S. military has assessed to be the case, so far, with American officials saying earlier today that the Russian military has fired more than 380 missiles at targets in Ukraine since the conflict began.

The French government has now put out an official readout of President Emmanuel Macron's call with Putin earlier today. Among other things, it claims that Putin expressed a "willingness to commit" to a halt on all strikes and attacks against civilians and their places of residence, the preservation of all civil infrastructure, and the securing of Ukraine's main roads for non-military traffic, particularly south of Kyiv. This all, of course, comes after, among other things, the indiscriminate Russian rocket artillery barrage today on Kharkiv that Ukraiian officials say killed dozens of civilians.

Mykhailo Fedorov, Vice Prime Minister of Ukraine and Minister of Digital Transformation of Ukraine, posted a picture on Twitter along with a message indicating that a shipment of SpaceX Starlink Satellite Internet Terminals had arrived in Ukraine. Fedorov had previously appealed to SpaceX founder, CEO, and Chief Engineer Elon Musk directly via the social media network for help in ensuring continued access to the internet in his country.

The tactic of removing signage that might be of use to invading forces dates back to at least World War Two.

A Russian rocket artillery barrage hit the city of Kharkiv, killing dozens of its residents, while the negotiations were ongoing.