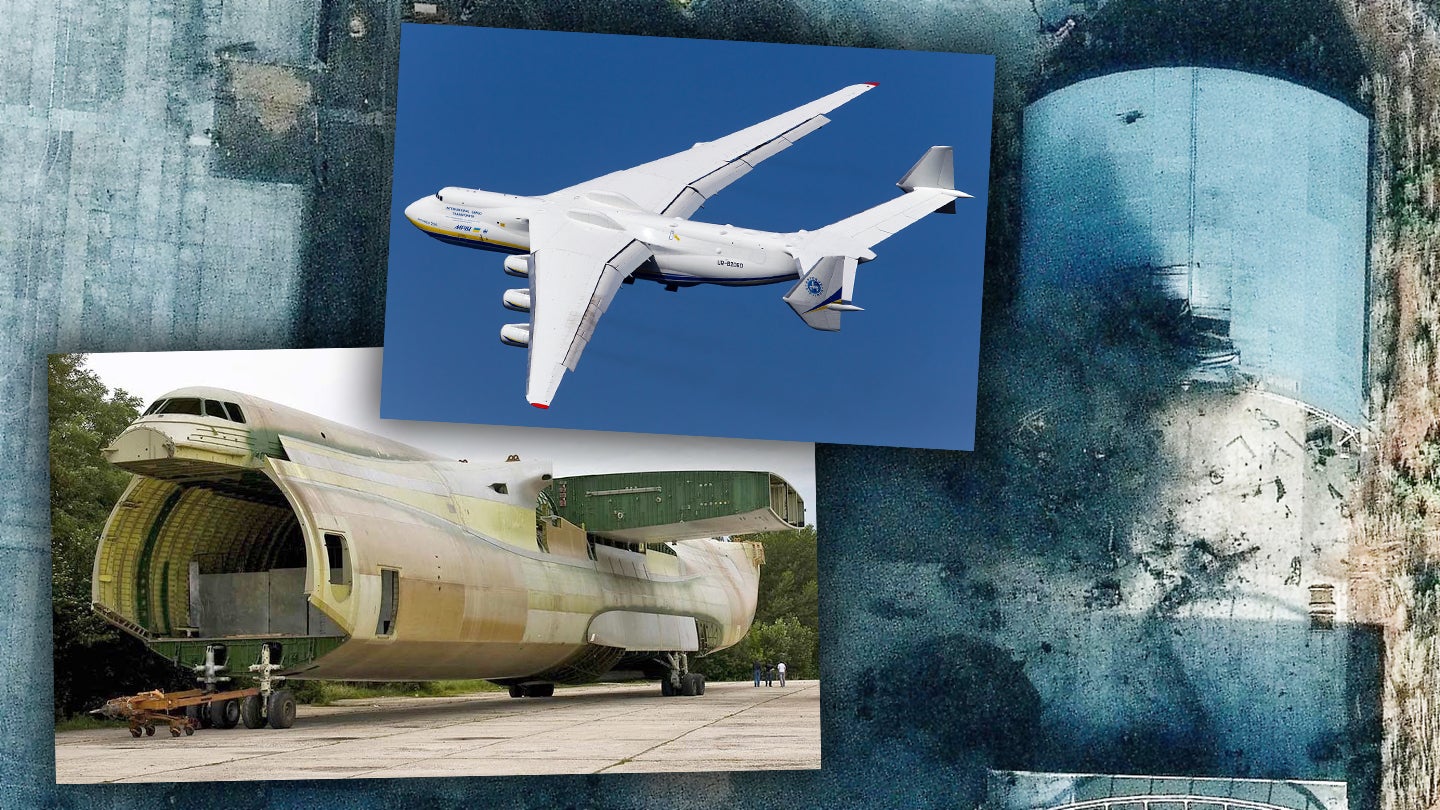 The precise condition of the world’s largest cargo jet remains unknown, but new developments suggest the aircraft may be among the many casualties of Russia’s ongoing invasion of Ukraine. The shelter that may have been containing the Antonov An-225 Mriya, or ‘Dream,’ has suffered significant damage as Russian and Ukrainian forces continue to battle over Hostomel Airport located on the northwestern outskirts of Kyiv. You can read all about what we had previously been able to determine about the state of the aircraft here.

Since last week, Ukrainian defense forces have been in near-constant combat with Russian troops attempting to take control of Hostomel Airport. As of today, the U.K.'s Ministry of Defence (MoD) reports that Ukrainian forces are still defending the airport, which the MoD says has been a "key Russian objective" since day one of the invasion. The airport is home to the An-225, which previously held the title of largest aircraft in the world. It still remains the largest operational aircraft.

The Mriya was built in 1988 to carry the Buran class of reusable orbiters built for the Soviet space program. In the decades since that program’s cancellation, it has been used for transporting large cargo or making emergency airlifts to disaster areas. It is the most capable aerial cargo hauler ever built.

Satellite imagery published today by ImageSat International shows multiple structures at the aircraft’s home airport have been significantly damaged in the fighting for the strategically valuable airbase. The locations of the strikes seem to indicate that specific facilities at the airport were targeted, including a large hangar that is typically home to the An-225.

The An-255 arrived back at its home base for maintenance over three weeks ago. Earlier satellite images taken just hours before the war began showed the massive aircraft sitting on the ramp near the hangar, but more recent images seem to suggest it had been moved under its roof just prior to Russia's invasion.

Additional satellite images, in this case, taken by Maxar on February 27th, show the destruction at the airport, including to the large shelter where the An-225 was supposedly stored:

Another image, which appears to be a screen capture from a drone's video feed, appears to show a large fire inside the hangar at some point. It's hard to make out, but some think this is the An-225 burning.

As many had feared, Ukraine’s Minister of Foreign Affairs Dmytro Kuleba posted a statement to Twitter yesterday that says the Mriya had been, in fact, destroyed:

Antonov’s parent company Ukroboronprom, a Ukrainian state-owned conglomerate, also stated on February 27th that Mriya has been destroyed. “The Russian occupiers destroyed the flagship of Ukrainian aviation - the legendary An-225 ‘Dream,’” a company press release reads. “The occupiers destroyed the plane, but they will not be able to destroy our common dream. She will definitely be reborn. It is estimated that this will take more than $3 billion and more than 5 years. Our task is to ensure that these costs are covered by the Russian Federation, which has caused intentional damage to Ukrainian aviation and the air cargo sector.”

However, Ukroboronprom issued another statement later the same day which said that “it is impossible to assess the plane’s condition and the possibility and cost of its restoring due to the lack of access to the aircraft as the control over the airport is taken by the Russian occupiers.”

The Antonov Company, which manufactured the An-225 and operates Hostomel Airport, likewise stated yesterday on social media that the exact condition of the aircraft remains unknown until it can be examined by experts.

While the exact condition of the An-225 Mriya is unknown at this time, it would appear that the aircraft has been damaged at the very least. Still, even if the Mriya has been totally destroyed, there is hope that another ‘Dream’ could rise up from its ashes. An unfinished An-225 airframe has been sitting for decades at an Antonov manufacturing facility outside Kyiv. This long-dormant second airframe could potentially be finished in the future.

If Ukraine comes out of this as a sovereign nation, replacing the An-225 may not be a top funding priority, but it has been a major source of pride for the country. As such, trying to replace it could become a defiant symbol of Ukraine building back stronger. There is also the question of insurance and what is covered and what is not.

Like so many things related to Ukraine right now, we will just have to wait and see about the fate of the An-225, but even if she is gone, it is possible that a new and improved 'Dream' could emerge from what is currently very much a nightmare of epic proportions.

We will be continuing our rolling coverage of the ongoing Russian invasion of Ukraine and will update this story as definitive information about the condition of the Antonov An-225 comes to light.