Ukrainian forces claim to have shot down a Russian Il-76 Candid airlifter flying near the country's capital Kyiv tonight, although there is no independent confirmation of this so far. Il-76s are generally used for heavy transport and paratrooper operations, though there are derivatives of the design that also serve as aerial refueling tankers and early warning aircraft. This comes as Russia's invasion of Ukraine is now entering its third day.

You can find more information about how Russia's war on Ukraine has progressed so far in earlier rolling coverage of the conflict here.

At the same time, while details are still limited, Sergii Nykyforov, the top spokesperson for Ukrainian President Volodymyr Zelensky, has said that the groundwork is being laid for negotiations to bring an end to Russia's invasion. This follows a number of reports today that suggest, despite advancing deeper into Ukraine, Russian forces have been unable to make the military gains they had hoped to have achieved by now.

"Ukraine was and remains ready to talk about ceasefire and peace. This is our constant position. We responded in agreement to the proposal of the President of the Russian Federation," according to a machine translation of Nykyforov's Facebook post. "Directly at these hours, the parties are consulting about the place and time of the negotiation process. The sooner the negotiations begin, the more chance there will be to restore normal life."

Russian President Vladimir Putin has previously called for negotiations over his extensive demands for what he wants Ukraine to do in order to end the conflict. At the same time, he suggested today that the Ukrainian military should overthrow the country's government and then discuss surrender terms with him.

There can only be questions already about how the Russian side understands the idea of a negotiated settlement to the current conflict. Putin has said he wants the government in Kyiv ousted, Ukraine "demilitarized," a formal pledge that it will not join NATO, and an agreement to cede control of the Crimean Peninsula and the country's eastern Donbas region before he will call an end to his "special military operation." Many, if not all of these points are non-starters for Ukraine, though officials have suggested that they are open to discussion about the country's NATO ambitions.

This all notably comes as Russian forces have steadily pushed into Ukraine, but at a pace that is slower than it appears they expected. There are growing reports about increasing Russian casualties, which may number in the hundreds or even thousands already, as well as supply chain issues and flagging morale.

"The enemy is clearly surprised by the results of the Ukrainian armed forces and volunteers to protect the integrity of our country," Ukrainian Ambassador to the United States Oksana Markarova said at a press conference earlier today. "We see that they didn't advance the way they planned."

That is, of course, the position of the Ukrainian government, but these general sentiments have been echoed by U.S. and U.K. officials in the past 24 hours. American officials, for weeks now, had been blunt in their warnings about the dangers Ukraine would face in the event of an all-out Russian invasion.

Of course, work toward negotiations does not equate to an imminent ceasefire. In addition, a temporary freeze of hostilities during such talks could potentially give Russian forces some breathing room to regroup and straighten out supply and other issues that may have hampered their operations so far. U.S. officials say they believe that Russia has not yet committed the bulk of the forces that it has arrayed around Ukraine, which had included more than 150,000 personnel at their peak, to this invasion. At the same time, it is very possible that units still in reserve are rated as less capable than those that have been employed in the initial stages.

Beyond that, ceasefires unfortunately often go into effect right after a burst of fighting as the parties involved seek to take as much physical territory before they have to halt the fighting. So, there is certainly a possibility that any immediate agreement will leave not-insignificant amounts of Ukrainian territory under Russian control.

The Kremlin could seek to take more drastic measures to bolster its position prior to any negotiations, especially if it is already frustrated with its inability to achieve its aim on the desired timeline. There have been mounting reports that Russian forces are engaged already in increasingly indiscriminate attacks that put civilians at risk. Still, something like a major artillery barrage or continuous aerial bombardment on the capital would be a far more terrifying act.

Regardless, the fighting has certainly not stopped at the moment, as is underscored by the reported shootdown of the Il-76 near Kyiv. There are also still unconfirmed reports that a group of Russian or Russian-linked saboteurs has been detained in the capital. There have been other reports of fighting, as well as Russian strikes, elsewhere in the country overnight, as well.

In the meantime, the U.S. government and other members of the international community continue to escalate sanctions against Russia over the conflict. Most significantly today, American authorities announced plans to sanction Putin, as well as Russian Foreign Ministry Sergei Lavrov, directly, which will include a ban on their ability to travel to the United States.

At the United Nations, Russia has now vetoed a draft Security Council resolution that would have condemned its invasion of Ukraine. However, in doing so, the Kremlin did highlight the limited, at best, support it has internationally for its actions. Only Russia voted against the resolution. China, India, and the United Arab Emirates abstained and the remaining members all voted in favor.

Separtely, the U.S. military and other members of NATO have pledged to continue supplying weapons and other military aid to Ukraine's armed forces, including possible additional unspecified air defense capabilities. The alliance has also activated its Response Force for the first time ever in order to further reinforce areas of its eastern periphery with Russia against any potential aggression outside of Ukraine.

All told, Russia's war in Ukraine looks far from over and the outcome of any future negotiations, if they even take place, remains to be seen. For his part, Nykyforov certainly appears to be holding out hope that this could provide a path to peaceful resolution of the conflict.

Ukraine's military states that it has also shot down a Russian helicopter and Su-25 by an S-300 air defense system. It also says the Il-76 was shot down with by a Su-27. The fact that any of these capabilities are still operational is remarkable:

There is also some chatter about another Il-76 being shot down, as well. It is possible that this is a case of confusion, we hope to find out more soon:

It also says one of its units was attacked downtown Kyiv. It seems there has been sporadic fighting in the city, but it's very limited in nature with Russian forces appearing to have been stopped from advancing into the heart of the city. With most indications that Russia is looking to decapitate the government, the fight for the capital is pivotal:

One control map that is a few hours old, but gives some idea of what is going on across the country:

There continues to be talk of a large airborne assault near Vasylkiv:

The map below shows the supposed assault or probing action down Victory Avenue (north) and the airborne assault (south):

There appears to be a slowdown in info coming out of the country that coincides with internet bandwidth degradation:

Considering we know there is heavy fighting all over the country, and what was claimed to be an amphibious operation in Odessa, the fact that we are seeing almost no information coming out of these areas is telling. It looks like access to the internet is being manipulated.

Clearly there is a major internet connectivity disruption:

Things are calm for the moment on the west side of Kyiv where the fighting has been focused. Dawn would likely be the next interval. Rough translation:

"On the Brest metro, the 101st Brigade destroyed a column: 2 cars, 2 trucks with tanks, a tank. Everything is calm, everyone is laid."

This is what the burst of fighting sounded like about half an hour ago. Some said tracers were seen in the air so this could have been anti-aircraft artillery:

Looks like two IL-76s were shot down. If they were loaded with airborne forces, that would be a huge loss of life.

We are getting some unconfirmed video and images of Russian forces and fighting in the southern Ukrainian city Melitopol, located near the northwestern reach of the the Sea of Azov:

Zelinsky on the streets of Kyiv in broad daylight. Waiting for translation.

There continue to be reports off attacks on vessels in the Black Sea, including the Border Guard Services's flagship:

Footage purporting to show a Ukrainian soldier firing a MANPADS against a low-flying jet:

Russian MoD claims it has taken full control of the southern city of Melitopol:

More footage from the strike on the building:

More video said to be from Kyiv:

Some additional footage of the aftermath of strikes in Kyiv:

The subway is apparently offline and the facilities are just being used as shelters now:

There has been persistent talk of Russian armor being out of fuel and its soldiers hungry questioning Russia's supply chains in some areas. How widespread the issue is remains unknown.

Russia's take on their eastern offensive:

New tally of how many Ukrainians have escaped to Poland:

Zelensky on living to fight another day:

Ukraine's assessment of the damage it has done to Russian forces and say they need help removing the bodies:

They also put out a little explainer on identifying friendly and enemy armor:

Russia claims 12,000 Chechens are ready to deploy to fight in Ukraine:

Some sort of action overhead Vasylkiv, could be a formation of either side's aircraft, too.

Column destroyed along a Ukrainian highway:

More proof of a major internet access disruption in Ukraine. A major decrease in videos and images coming out of the country underscores this. We have seen next to nothing from entire cities that have been seized:

Another video of the strike on the tower:

Two Global Hawks up over the Black Sea:

Additional footage of abandoned fighting vehicles from both sides:

We have concluded our updating of this story and are now continuing our rolling coverage of the war in Ukraine here. 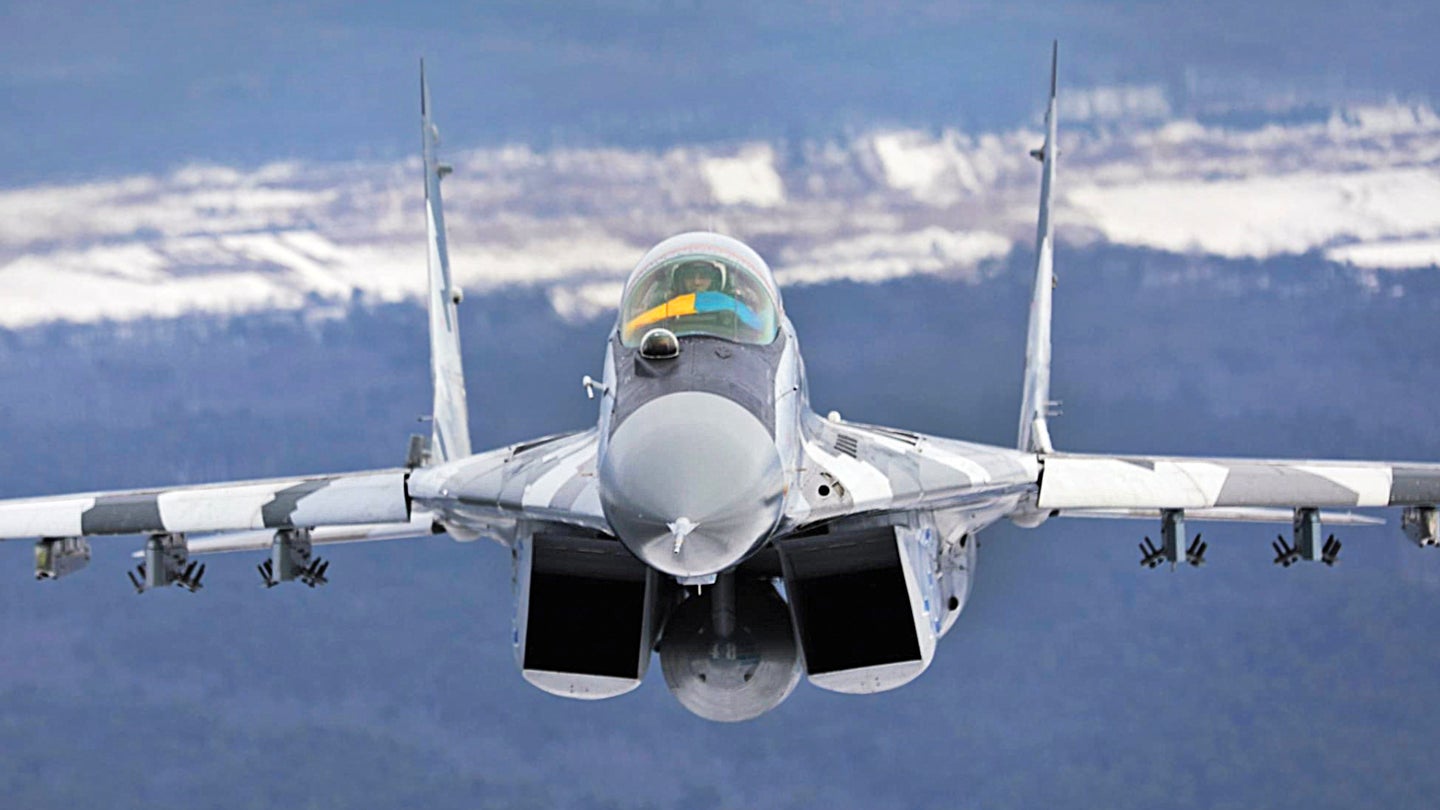 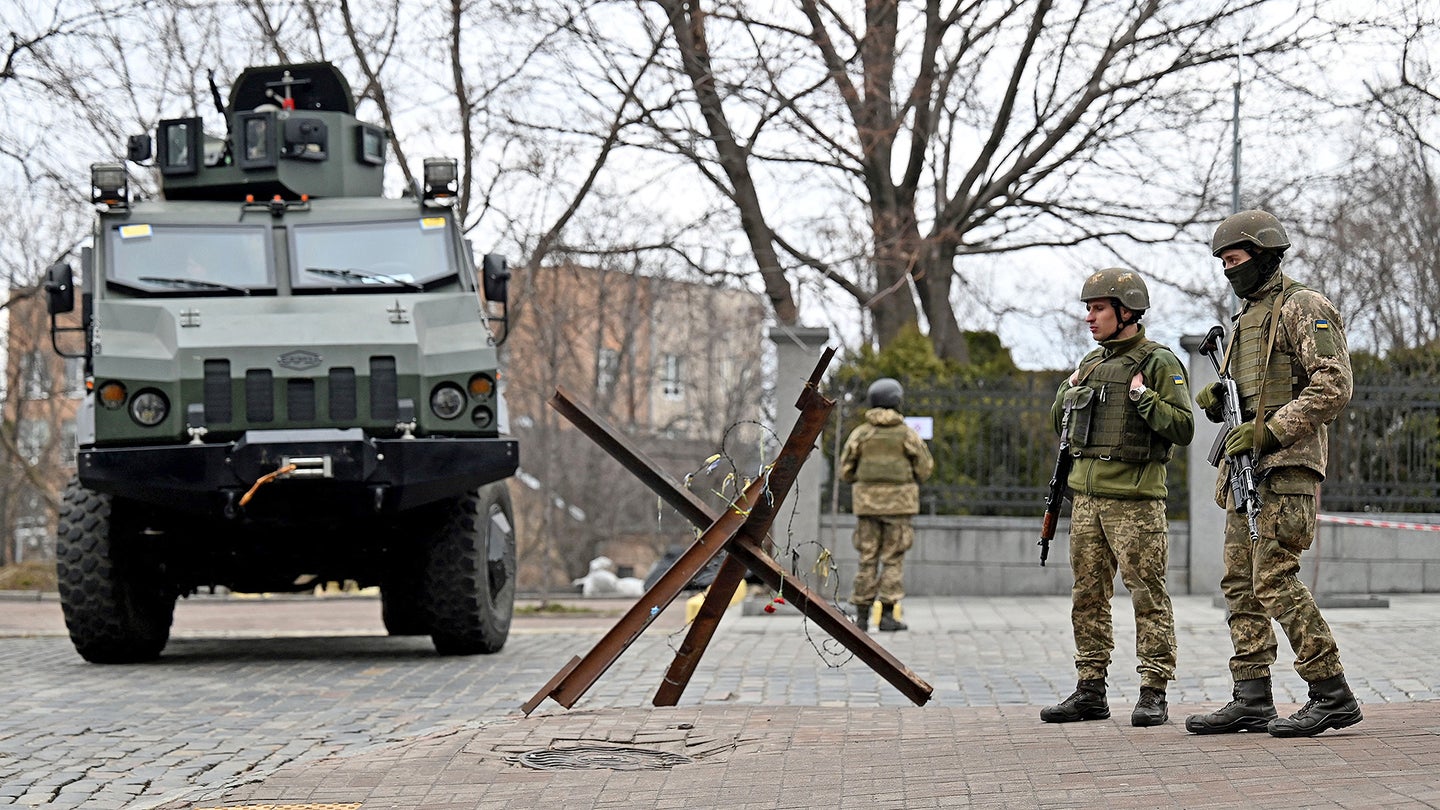 Ukrainian forces are preparing to hold the line in Kyiv amid reports of renewed Russian offensives across the country. 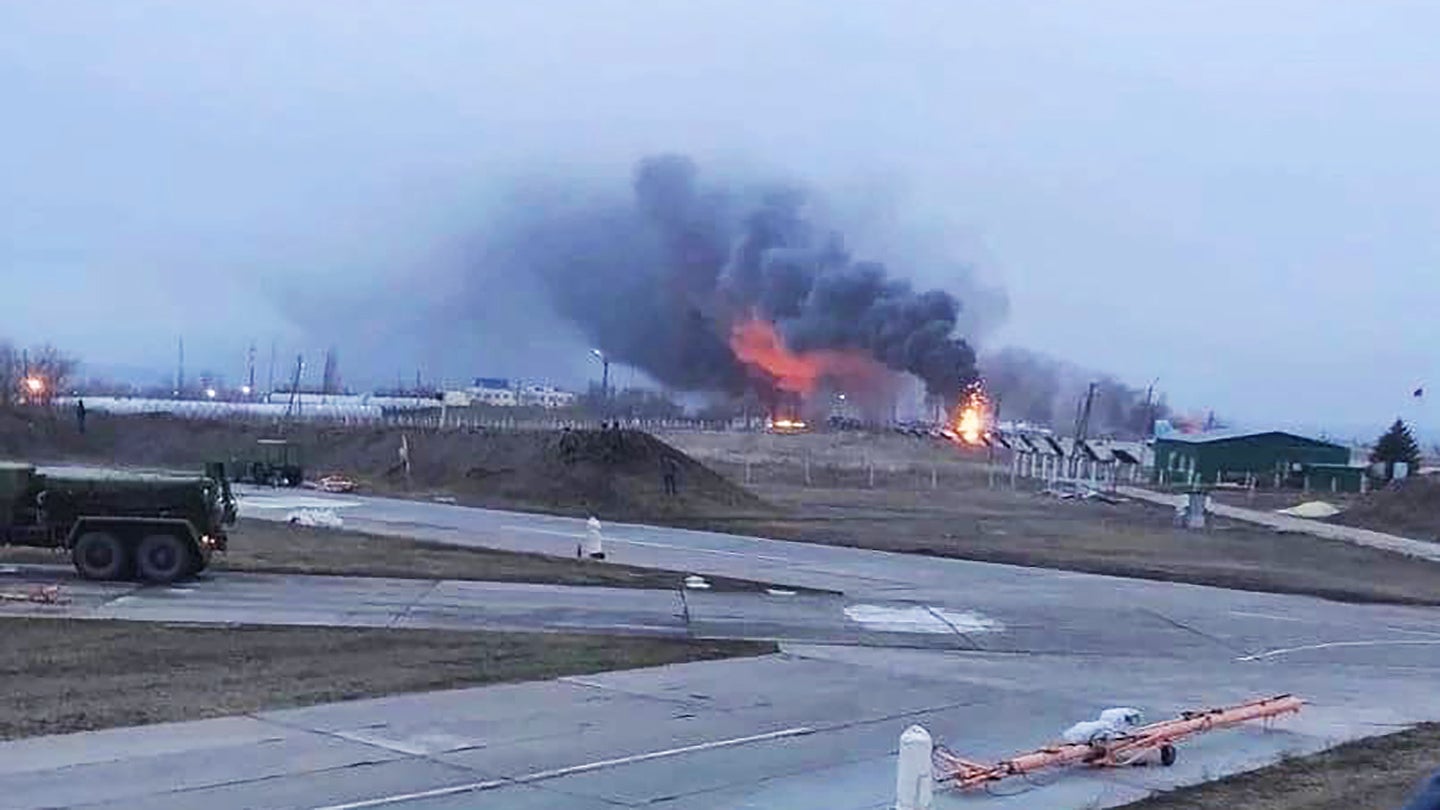