Oddly enough, this wasn’t even the first time one of the Navy’s Landing Craft Air Cushion (LCAC) visited Eglin Air Force Base. 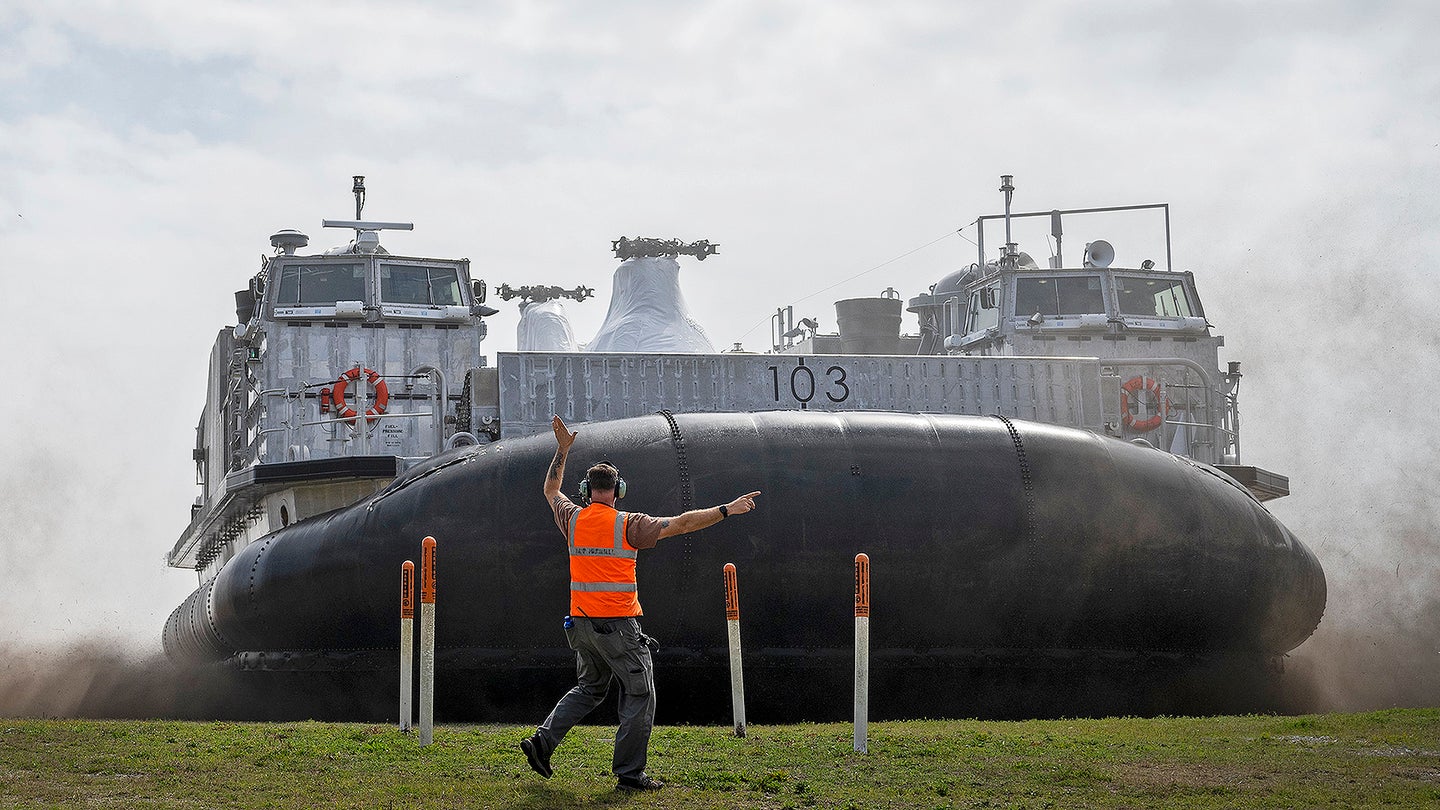 A U.S. Navy amphibious Landing Craft Air Cushion (LCAC) hovercraft transported a CH-46 Sea Knight helicopter some fifty miles from Pensacola, Florida to Eglin Air Force Base. Using an LCAC for such a task is unusual, although this isn't the first time the Florida base has been visited by one of these big hovercraft.

According to details the U.S. Air Force released along with images of the move, the CH-46 will be used for training on the sprawling Eglin Range. Images show the LCAC coming ashore just south of Hurlburt Field, a major U.S. Air Force Special Operations base, on February 24. Portions of U.S. Highway 98, which stretches along the Gulf Coast, had to be closed to allow the hovercraft to leave the area.

Images shared by the USAF show the LCAC traveling along a narrow waterway, likely the Santa Rosa Sound, near Eglin AFB. Subsequent photographs show the craft being directed onto land to unload the CH-46 from its deck, where a forklift was waiting nearby. The CH-46 was then towed away on its own landing gear.

The LCAC was operated by Naval Surface Warfare Center Panama City, but it’s unclear where exactly the Sea Knight originated from. The USAF stated it was delivered from Pensacola, where Naval Air Station Pensacola is located. NAS Pensacola, sometimes called the “Cradle of Naval Aviation,” is a major hub for training Navy aviators and support personnel.

The National Naval Aviation Museum is also located in Pensacola, which has at least one CH-46D on display.

Eglin has an unlikely history with the LCAC. In 1983, the Navy sent one of the craft to the base for testing in the U.S. Air Force’s McKinley Climatic Laboratory, a specialized facility that features a wide array of heating and cooling systems, steam generators, and other equipment that can put vehicles through torturous climate testing. Conditions such as deep freezing temperatures, extreme humidity, or even dust storms can be created within the facility.

A video taken during the LCAC's trip to Eglin shows the massive craft transiting underneath Highway 98 near Destin, Florida just south of the base as cars drive overhead. It then crosses the flat and often swampy terrain surrounding the base to get to the test hangar—hovercraft are truly amazing machines!

It’s unusual for a hovercraft to be used to transport a large aircraft between facilities like this, and CH-46 helicopters have previously been moved on public highways using aircraft tugs or drop deck trailers. It’s possible the wetlands surrounding Eglin and the limited number of highways connecting Pensacola to Eglin dictated this unconventional LCAC trip.

The Navy first deployed the LCAC aboard USS Germantown (LSD 42) in 1987. The 91-feet-long vehicles can carry payloads up to 150,000 pounds and are used by Marine Air-Ground Task Forces for ship-to-shore transportation of anything from personnel, cargo, or even an M1 Abrams main battle tank. The hovercraft can be operated with a crew of five and is capable of landing on beaches inaccessible by conventional landing craft thanks to the massive air cushion supporting it, which enables it to travel over shallow waters, beaches, or virtually any other terrain that isn't significantly uneven. 91 of the craft were built before the final was delivered in 2001.

The LCAC has a maximum speed of over 40 knots when traveling with a full load and a range of 200 miles under normal conditions. This gives the craft capability to launch over-the-horizon amphibious assaults, keeping the vessels they are launched from farther from contested or denied areas. The craft has two gun mounts that can house M2 .50 caliber or M240 7.62mm machine guns in addition to MK-19 40mm grenade launchers.

The Navy is developing a replacement for the aging LCACs known as the Ship-to-Shore Connector, or SSC, a newer air cushion craft that can accommodate larger loads than the service's current hovercraft. The Navy expects the program to cost $4 billion for 73 SSCs, and Naval Sea Systems Command projects the craft to reach initial operational capability sometime this year. The service also plans to buy the Light Amphibious Warship, or LAW, the first of which is expected next year. That vessel is intended to fill a gap between these smaller hovercraft and the Marine Corps' larger L-class multipurpose amphibious warfare ships.

The tandem-rotor Boeing CH-46 Sea Knight, meanwhile, was introduced in 1964 and saw extensive use by the US Marine Corps and Navy for more than four decades. USMC used the helicopter for all-weather transport, search and rescue, medevac duties, and combat support until replacing it with the MV-22 Osprey and retiring it in 2015. The Navy used the helicopter as a medium-lift utility helicopter until retiring it in 2004, replacing it with the MH-60S Seahawk.

The State Department also used former USMC CH-46 “Phrogs” for its Air Wing beginning in 2012, using them to transport diplomats and other personnel throughout Afghanistan. After American forces evacuated from the country last year, the State Department abandoned seven of the Sea Knights after rendering them inoperable. The agency told The War Zone that the helicopters were “already being phased out of the Department’s inventory and were slated for eventual destruction due to age and supportability issues."

Whatever the reasons for this irregular transit were, the use of an LCAC to transport a Sea Knight certainly made for an impressive, but not totally unprecedented site at one of America's premier air bases.