U.S. Air Force Trains With Japan’s US-2 Flying Boat As It Looks Forward To Its Own Amphibious Plane

While plans for an amphibious MC-130 transport take shape, Cope North 2022 provided an opportunity to see the capabilities of the US-2 firsthand. 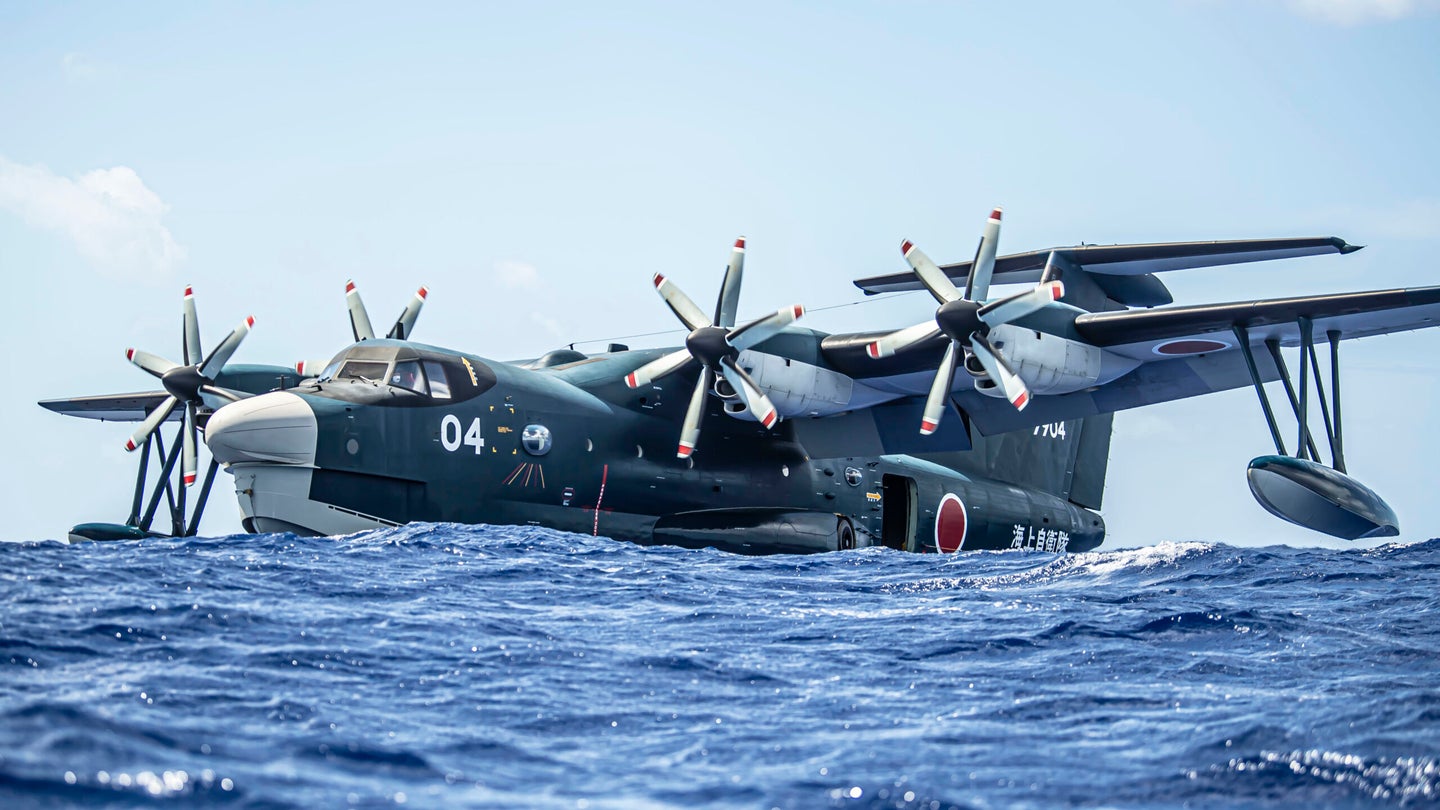 Airmen from the U.S. Air Force got up close and personal with the Japanese ShinMaywa US-2 amphibious aircraft during the latest iteration of the Cope North exercise, which took place recently in the Asia-Pacific region. The rare, potentially first-time exposure to one of the few amphibians in military service today comes as the service looks increasingly at an amphibious variant of the C-130 Hercules transport to operate from littoral areas in support of special operations forces.

Cope North 2022 took place from February 2nd to the 18th and involved participation from the air forces of Australia, Japan, and the United States, with around 3,500 personnel and 130 aircraft. Participants trained in air combat, large force employment, and humanitarian assistance and disaster relief (HA/DR) exercises. These scenarios were played out at various locations, including Andersen Air Force Base and Northwest Field on Guam; the Northern Mariana Islands, including Rota, Saipan, and Tinian; Palau; and the Federated States of Micronesia.

Cope North 22 also included training related to the Agile Combat Employment (ACE) concept of operations, which involves providing dispersed operating locations that can be accessed by Air Force and allied combat aircraft during a crisis. Other central tenets of ACE include deploying assets in a less predictable way, leveraging smaller ground support teams, and building up austere bases to minimum operating requirements, before moving on again quickly.

In this theater, Pacific Air Forces are increasingly working on ACE as a means to project combat power across the Asia Pacific region, including using a network of distributed operating locations. So far, these have been on land, but the Air Force is now examining how amphibious aircraft would expand the possibilities of this concept further still.

Photos released yesterday by the U.S. Department of Defense show a Japan Maritime Self-Defense Force (JMSDF) US-2 operating in the water near Andersen during the exercise as part of an HA/DR training scenario. JMSDF personnel worked alongside U.S. Air Force HH-60G Pave Hawk combat search and rescue helicopters from the 33rd Rescue Squadron, which is stationed at Kadena Air Base in Japan, during this particular portion of Cope North 22.

The US-2, a remarkable aircraft that The War Zone has examined in depth in the past, is thoroughly modern, despite its retro looks. It is powered by four Rolls-Royce AE 2100J turboprops that each develop 4,600 horsepower, has a flight deck equipped with digital displays, can cruise at 300 miles per hour, and has a maximum range of almost 3,000 miles. It also boasts short-takeoff and landing (STOL) capabilities thanks to a combination of blown flap and an advanced flight control system.

The U.S. Air Force at large has been taking an increasing interest in the US-2 in recent months. Last November, an Air Force Special Operations Command (AFSOC) delegation visited Iwakuni Air Base in Japan to learn more about the amphibian and its concept of operations. At that time, JMSDF personnel briefed Maj. Gen. Eric Hill, AFSOC deputy commander, and 353rd Special Operations Wing leadership, in an exchange that was described as “further enforcing the iron-clad partnership between the United States and Japan.”

“Flying an airplane that can land on water isn’t a new concept, but few aviators have the experience of amphibious aviation,” Maj. Gen. Hill said at the time. “Gaining lessons from our partners will help us learn what to anticipate as we begin to build our own tactics and techniques moving forward.”

Significantly, a U.S. Department of Defense media release at the time stated that the visit to Iwakuni “brings better understanding to AFSOC’s growing interest in amphibious operations,” adding that the US-2 is “designed for personnel rescue and contingency response.”

Of course, those last two missions were also part of Cope North 22, and the Air Force also has an eye on how a future amphibious aircraft could operate in these roles. With that in mind, it’s not a surprise that AFSOC has been taking a close look at the US-2.

While the high-level AFSOC visit to Iwakuni was explicitly described as a fact-finding mission, at least in part, that’s not necessarily the case with the Air Force’s interactions with the US-2 in Cope North 22. However, in light of the service’s previous interest, it’s noteworthy that Air Force personnel have now been working with the US-2 in some of the kinds of missions that it envisages for a potential new amphibious aircraft.

Last September, AFSOC provided its clearest indication yet that an amphibious aircraft — based on the MC-130J Commando II multi-mission combat transport — is firmly on its list of priorities.

An official release at the time included the following:

Before this point, there were other signals that AFSOC was finally embracing the idea of an amphibious C-130, a concept that has been explored on several occasions in the past, with a variety of floatplane concepts having been examined.

All told, the Asia Pacific region is seeing a definite resurgence in interest in seaplanes right now. While the MC-130J MAC will not be a true flying boat, like the US-2 and the even larger Chinese AG600, it will have an amphibious capability, meaning it will be able to still land on a runway with its floats fitted. As for the AG600, it has recently undergone a major redesign and remains in prototype form for now.

Among the missions that are being considered for the C-130 floatplane is combat search and rescue, which presents particular demands in the Asia Pacific theater, where aircrew may need to be plucked from the water at considerable distances — far beyond the reach of the current fleet of HH-60G Pave Hawks, for example. Future CSAR platforms, including amphibious, vertical takeoff and landing, and even stealth capabilities, are something the Air Force is already looking at. With its ability to operate from water, and to cover long distances, the US-2 provides some idea of how the MC-130J MAC might be operated in this role.

This kind of concept fits in very much with the broader Agile Combat Employment concept, in which runway independence is fast becoming a huge issue for the U.S. military. An MC-130J that’s able to operate from water or from airstrips would be one way of helping mitigate the vulnerability of large conventional runways, particularly when held at risk by ballistic missiles.

Some are even saying that AFSOC should just buy the US-2, which could make some sense for a more limited mission set. But the MC-130J MAC would be better suited for supporting logistical operations, including moving outsized supplies, vehicles, and fuel to remote outposts. Then again, the MC-130J MAC doesn't actually exist just yet and its actual capabilities are yet to be realized.

There is also a sense of urgency around AFSOC’s future amphibious aircraft, with plans announced last September for an operational demonstration of the MAC concept in just 17 months.

Should that ambitious timeline be met, the Air Force may not have to wait long before it, too, can field a transport that can operate from water with as much ease as it can on land. In the meantime, Japan’s US-2 provides a fascinating glimpse of what kinds of capabilities this class of aircraft can offer.