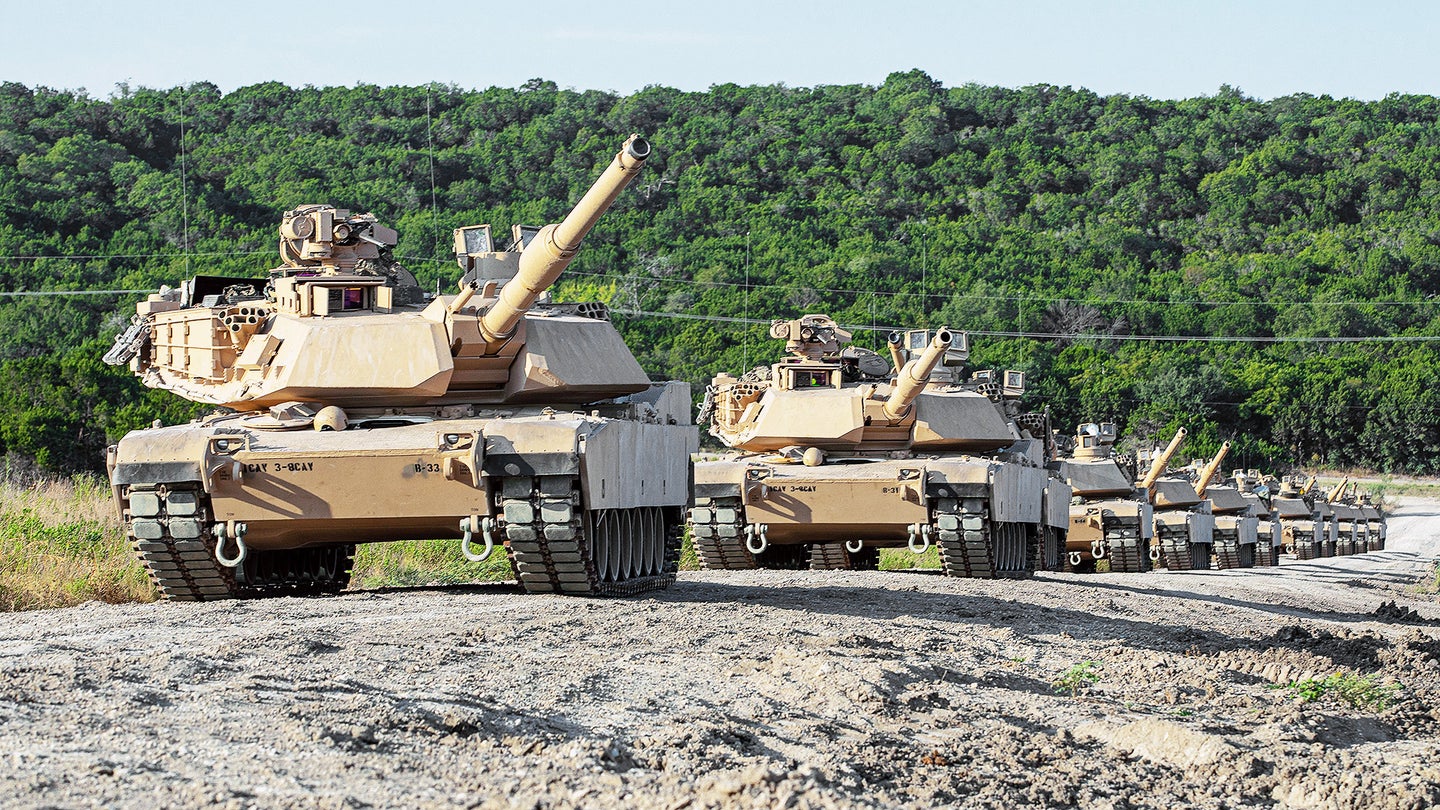 Poland has moved a step closer to a major renewal of its land warfare capabilities with the U.S. State Department’s approval of the possible sale of up to 250 M1A2SEPv3 Abrams main battle tanks, worth up to $6 billion. Should the deal go through, Poland would effectively double its inventory of advanced tanks, with the U.S.-supplied Abrams joining a similar number of German-made Leopard 2s within the Polish Land Forces.

The timing of the approval is also noteworthy, coming as it does amid a period of unprecedented post-Cold War East-West tensions focused on the threat of a possible new Russian invasion of Ukraine and the build-up of NATO and Russian forces elsewhere in Eastern Europe.

Approval for the possible Foreign Military Sale came yesterday with the U.S. Defense Security Cooperation Agency (DCSA) notifying Congress accordingly. The deal is centered upon 250 of the latest M1A2 SEPv3 Abrams tanks, as well as 26 M88A2 Hercules Armored Recovery Vehicles and 17 M1110 Joint Assault Bridges (JAB). The M1110 is based on the M1 Abrams chassis, while the older M88A2 uses a bespoke chassis first developed in the mid-1960s and drawing upon earlier tank designs.

Other items of equipment and ammunition included in the package is outlined as follows:

According to the DCSA, the proposed sale “will improve Poland’s capability to meet current and future threats by providing a credible force that is capable of deterring adversaries and participating in NATO operations. Poland will have no difficulty absorbing this equipment into its armed forces.”

The announcement follows a recent campaign by Republican lawmakers to accelerate the sale, partly in response to the deteriorating security situation in Europe, with Russia’s build-up of forces around Ukraine at its center. As well as the fears of a new Russian campaign directed against Ukraine, there have been significant movements of Russian and NATO forces elsewhere around Eastern Europe, including to Poland, which has received additional U.S. troops and fighter jets in recent days.

Accelerating the tank sale was important “especially as Russia builds up forces around Ukraine, would send an important message to both NATO and the Kremlin,” said the ranking members of the House Armed Services Committee, Mike Rogers, and the House Intelligence Committee, Mike Turner, and Lisa McClain.

“Further, helping to equip Poland with the M1A2 tank would serve to displace Soviet-era equipment in the Polish force structure, and thus enhance interoperability with U.S. and NATO forces, while simultaneously strengthening the U.S. industrial base,” they added.

Polish plans to acquire Abrams tanks date back to at least October last year. At that time, the Polish Minister of Defense Mariusz Błaszczak stated that “equipping the Polish Army with Abrams tanks is absolutely justified as it builds interoperability between American and Polish forces.” That public announcement followed a meeting with his U.S. counterpart Lloyd Austin.

In July 2021, Błaszczak had said the country was looking for new main battle tanks, calling for “Tanks available in the best-equipped version, tanks that are combat-proven, tanks which were constructed to counter the most modern Russian T-14 Armata tanks.”

The spearhead of Poland’s armored formations is currently provided by around 250 Leopard 2A4 and Leopard 2A5 tanks, which are also undergoing upgrades. As such, the Abrams is likely to replace Cold War-era T-72 tanks and their local PT-91 Twardy derivatives, according to

While the T-14 is a notably advanced adversary, featuring improved passive armor over older Russian tanks and has an active protection system, the Armata has faced a number of problems, including limited funding. Much-vaunted plans to purchase thousands of examples have not materialized, with an initial production batch of around 100 currently planned.

Unlike many other European nations, Poland has not made significant reductions to its tank forces following the end of the Cold War. Instead, it has remained focused on the possibility of having to counter a Russian armored attack. While Poland does not share a border with ‘mainland Russia,’ it does share a frontier with the heavily militarized Russian exclave of Kaliningrad and with Belarus, a close Russian military ally.

In particular, even before the current security situation in Europe, NATO planners had identified the so-called Suwalki Gap as a potential flashpoint in a future confrontation between the alliance and Russia. This narrow strip of land connects two NATO member states, Poland and Lithuania, and a Russian move here, via Belarus, would sever the three Baltic States from other NATO countries.

With this and other contingencies in mind, Poland has focused on bolstering its ground forces’ ability for rapid maneuver and protection, within which tanks play a vital role. This is also predicated on the fact that Russia continues to operate significant tanks forces as well as artillery.

“This is a powerful system for the Poles to have, given their geographic location and their historical experience, particularly with folks, you know, streaming west,” explained General Dynamics chief executive Phebe Novakovic last October.

The move to buy Abrams tanks also follows other Polish acquisitions of American military equipment in recent years, part of a wider process of the country moving closer to the U.S. Other major deals are providing the Polish military with Patriot air defense systems, F-16C/D Block 52 fighter jets, HIMARS rocket artillery, Javelin anti-tank missiles, and others.

According to Polish officials, the first of the new Abrams tanks could be delivered as early as this  year, while Defense News

Overall, the plan to buy new tanks speaks to Poland’s continued focus on armored warfare as well as increased commonality with the U.S. armed forces. It also demonstrates its commitment to more defense spending, a requirement not only of its commitment to NATO budget goals but also of the country’s drive to develop armed forces that are better able to dissuade potential Russian aggression.

The Pentagon To Beef Up Its Posture In Poland, Add 1,000 Troops

These developments come less than a week after the Pentagon announced it is planning to pull nearly 12,000 troops out of Germany.