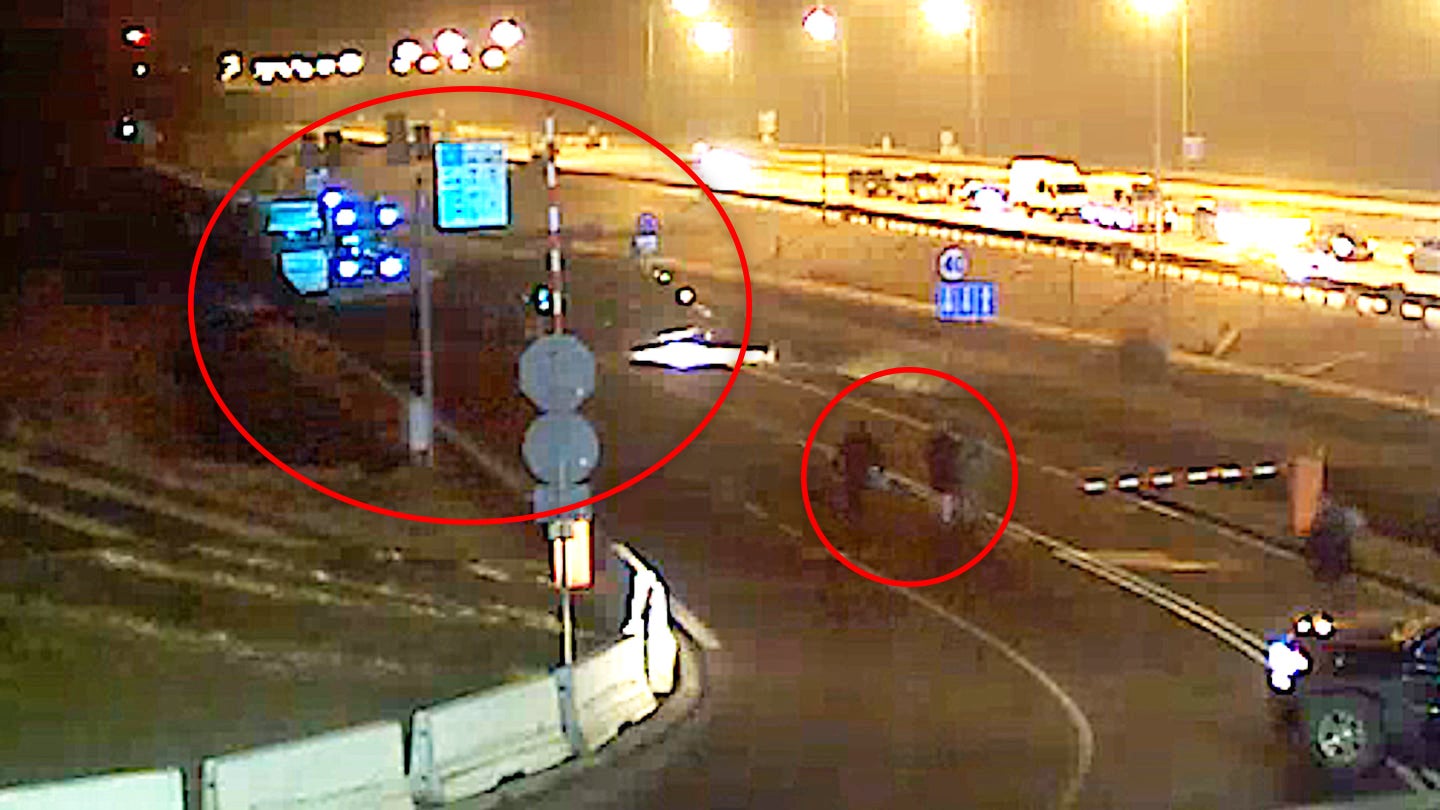 With fears still high that the Kremlin may soon launch a new invasion of Ukraine, it's not surprising that a curious flight by a U.S. Army HH-60M, a "dustoff" or air ambulance variant of the Black Hawk, to a checkpoint along the Polish-Ukrainian border last night drew significant attention on social media. For some, the scene had almost a clandestine Bridge Of Spies feel to it. The War Zone can now confirm that this helicopter was retrieving a U.S. service member assigned to the U.S. Embassy in Ukraine who was experiencing an unspecified medical emergency.

The first indications that the HH-60M in question, which has the serial number 20-21131 and was using the callsign EVAC01 at the time, was headed toward Poland's border with Ukraine, based on data from online flight tracking websites, began to appear on social media at around 11 PM local time last night. The Polish Border Guard has a publicly available live camera feed showing Korczowa-Krakovets border crossing, which subsequently confirmed that the Black Hawk had landed on the road there, appearing to pick up an individual who had crossed over from the Ukrainian side. The helicopter was then tracked flying to a hospital in the Polish city of Rzeszow.

Maj. Kuhn could not provide any further details about this individual's condition.

On February 14, the U.S. Embassy in Kyiv formally announced that it was "temporarily relocating ... operations from Kyiv to Lviv due to the dramatic acceleration in the buildup of Russian forces." The U.S. State Department has also urged all U.S. citizens in Ukraine to leave the country as soon as possible due to the crisis and Polish authorities have said they will allow them to cross into their territory freely, with no advance notice needed. Welcome centers for Americans traveling out of Ukraine overland into Poland have now been established at the Korczowa-Krakovets and Medyka-Shehyni border checkpoints.

Last week, the U.S. military separately announced that it was withdrawing a contingent of U.S. Army National Guardsmen deployed to Ukraine to help train members of that country's military.

It is not clear why the helicopter did not fly directly to Lviv, which is just over 40 miles east of the Polish border, to execute this medical evacuation mission. However, the presence of U.S. military personnel is a particularly sensitive matter in the context of the current crisis surrounding Ukraine, with the Kremlin having said that any expansion of NATO's military presence in that country is a "red line" issue. It is not hard to see how American officials would have chosen this course of action so as not to provide any sort of pretext for allegations that the U.S. military has been quietly, or even secretly, deploying additional forces into Ukraine. One imagines that a different plan would have been chosen if this individual's medical emergency had demanded more immediate and direct assistance.

Of course, until this latest crisis surrounding Ukraine subsidies, any U.S. military activity close to the Ukrainian border will draw at least some scrutiny. Just today, another Army Black Hawk, a UH-60M transport variant with the serial 15-20796, was tracked flying from Constanta, Romania, to an area near the Romanian-Ukrainian border. It then flew to Suceava Ștefan cel Mare International Airport in the city of Suceava, which is just under 25 miles south of Ukraine. At the time of writing that helicopter has made at least one more trip from Suceava to the same general area near the border and there are reports that it retrieved four American troops during the initial flight for unclear reasons. More Army Black Hawks have been tracked flying in Romania, as well.

The War Zone has already reached back out to USAREUR-AF for more information about this helicopter's activities.

Over the past few weeks, the U.S. military has been deploying ground and air assets to Romania as part of a larger effort within NATO to reinforce its eastern flanks and deter Russian aggression. This has all come amid the persistent fears that the Kremlin could launch a new incursion into Ukraine as soon as this week. Russian authorities did announce yesterday that they were beginning to withdraw forces from areas near Ukraine's borders. At the same time, there remain no indications that the Kremlin has made any significant moves to draw down its massive military buildup around its neighbor, and it may actually still be sending more forces to certain areas.

As a result of all this, any military activity in or around Ukraine that stands out, such as these recent Army Black Hawk flights, is likely to continue drawing significant attention for the foreseeable future.

By design, Russia has plenty of choices when it comes to Ukraine, some of which are far riskier than others.

The prospects for de-escalation of the current crisis surrounding Ukraine remain murky as Russia’s Putin claims a “genocide” is going on there.