The drones will be able to scout ahead for ambushes, targets of opportunity, and greatly enhance troops’ situational awareness on the front lines. 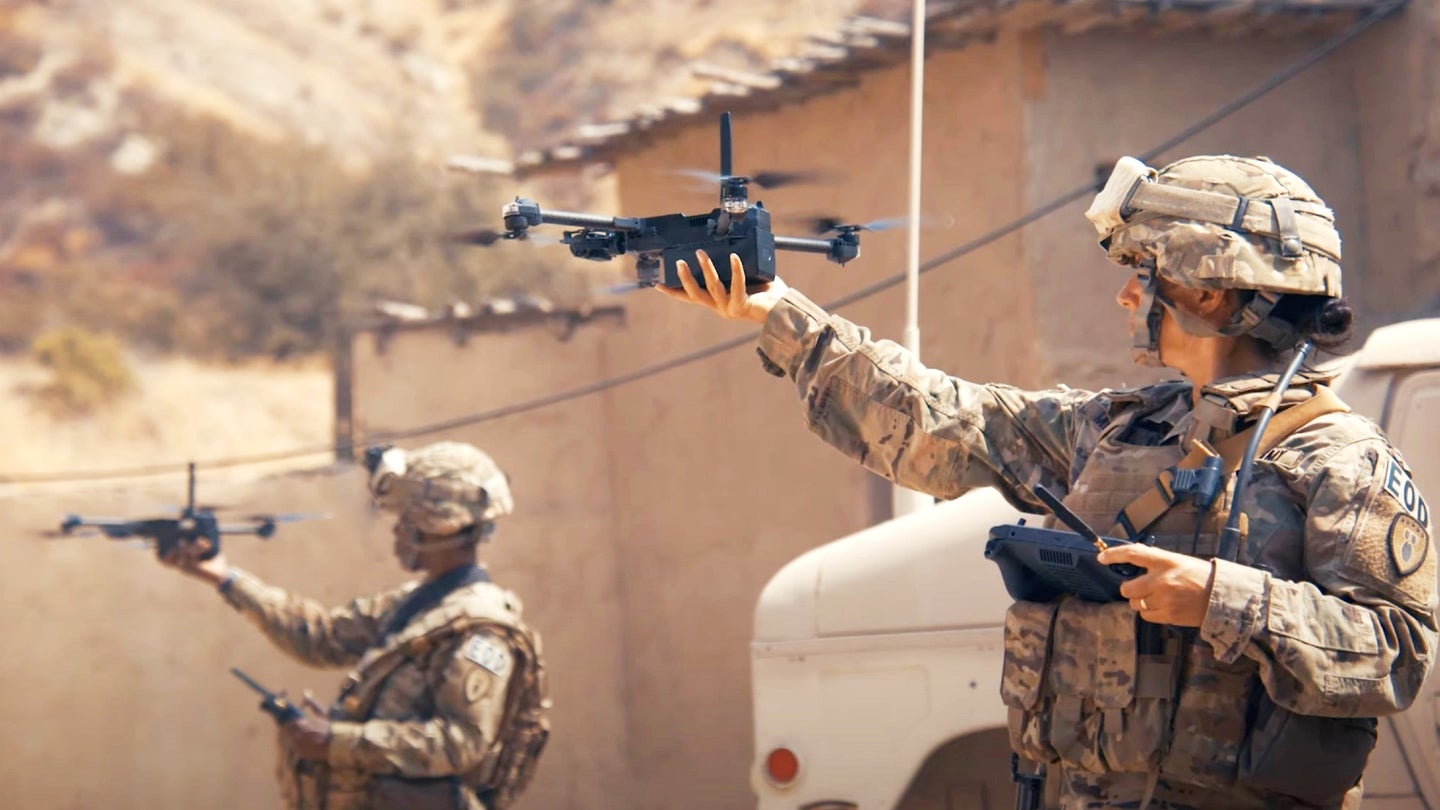 The U.S. Army has selected American drone manufacturer Skydio for its Short Range Reconnaissance (SRR) program which seeks to field a low-cost, rapidly-deployable scout drone that can be carried by individual soldiers. Commercially-available off-the-shelf drones have been used for these roles in the past, but operational security concerns over the use of foreign-made drones have in recent years led the U.S. government to restrict drone technologies from countries deemed adversarial. With advanced American-made drones now being acquired, it's possible that small man-portable drones become standard equipment throughout the service.

In a company press release issued this week, Skydio says they were awarded a $20.2 million/year contract to deliver their X2D drones to the Army’s SRR program. It’s unknown how many individual units will be included in the firm-fixed-price production contract, which will run for five years.

According to a company fact sheet, the X2D drone measures 11.9” x 5.5” x 3.6” when folded, and 26.1” x 22.4” x 8.3” when unfolded. The entire drone with its battery weighs just under three pounds. The X2D is operated by its own proprietary controller that features a 6.8” LED touchscreen with a 720p video feed, an internal antenna, and a fold-down protective cover. The controller can communicate with the drone up to six kilometers (3.6 miles) away over a 5 GHz wireless connection.

Skydio says the X2D offers up to 35 minutes of flight time, can operate in both day or night, and features artificial intelligence tools that enable 360-degree obstacle avoidance and “subject detection” of both people and vehicles. Skydio’s drone features a foldable carbon fiber and magnesium frame and can be deployed in under 75 seconds, according to the company’s website.

The X2D is equipped with a 4K video camera with 16x digital zoom as well as a forward-looking infrared camera. Additional sensors can take 3D scans of the drone’s environment and enable “autonomous scene reconstruction,” presumably meaning the drones can create 3D renders of the environments through which they travel. Skydio’s quadcopter is also capable of autonomous overwatch in which it orbits points of interest to offer real-time overhead reconnaissance.

In Skydio’s press release announcing the contract with the Army, Col. Joseph Anderson, Project Manager for U.S. Army Unmanned Aircraft Systems, called the deal a “significant milestone for the Army, our strategic partners and the domestic industrial base,” stating that “the future for our Soldiers is now.”

Skydio CEO Adam Bry added that while “civilian drone technology has raced ahead of traditional defense systems,” the contract with the Army will ensure that “our Soldiers will now have access to the most advanced capabilities in the world in this class.”

According to the Army’s Program Executive Office (PEO) for Aviation, the Short Range Reconnaissance program is aimed at delivering “an inexpensive, rucksack portable, vertical take-off and landing drone that provides the Soldier on the ground with a rapidly deployable scouting capability to gain situational awareness beyond the next terrain feature.” In an Army release from 2019, PEO Aviation seemed to suggest that commercial drone technologies had outpaced military capabilities, compelling the Army to turn to private industry for its SRR program:

Soldiers on today's battlefield face an enemy that is able to purchase low-cost consumer drones, which provide capabilities previously limited to more expensive and uniquely military technologies. Advanced, commercially-developed small unmanned aircraft systems can dramatically reduce the time and cost of getting a flying vehicle in use. To provide these capabilities, the Army is using agile design to execute iterative development based on Soldier testing and immediate feedback to the commercial companies.

A 2017 federal contract opportunity for the Short Range Reconnaissance program offers a comprehensive list of requirements for the platform, including a 30-minute minimum flight endurance, 3 km (1.86-mile) operational range, an 8,000-foot service ceiling, the capability to operate in 15-knot winds, both manual and autonomous waypoint flight modes, and “programmable mission and loss of link procedures.” The contract opportunity states a target price point of $2,000 for each airframe, under $2,000 for each “thermal sensor component,” and under $2,000 for each radio system. A full list of the requirements can be read below:

In 2021, Skydio’s X2D drone was selected as one of six designs the Army would evaluate for the Short Range Reconnaissance program. Army Test and Evaluation Command then narrowed the field down to two companies. It’s unknown who the other company was in that downselect, but we have reached out to Skydio for clarification about whether Skydio is the sole provider of systems for the SRR program as their press release seems to suggest.

The Army has in recent years been eyeing smaller, hand-launched drones like the Black Hornet or RQ-11B Raven to be deployed at the squad level. Units in the field can deploy these drones to offer an on-the-go eye-in-the-sky, offering a rapid, low-cost method for developing a real-time picture of their surroundings. These small unmanned vehicles can offer an unprecedented level of situational awareness and open the door for new tactics for scouting for ambushes, improvised explosive devices, or hostile forces on the other sides of walls or around corners. They also open the door for conducting special reconnaissance operations at greater standoff distances, or even for assessing the impact of airstrikes or artillery.

The Army’s selection of Skydio, who design and manufacture their drones in the United States, would seem to be in line with recent federal government directives concerning foreign-made drone technologies and the need to support an American drone industrial base. Skydio states in their press release that the X2D drone “complies with the NDAA’s rigorous supply chain security requirements and offers superior cybersecurity protection.”

Those requirements could have played a part in the selection process for the Army’s SRR program, as the service has previously had to halt the use of foreign-made drones. In 2017, the U.S. Army banned the use of all drones made by Chinese drone manufacturer DaJiang Innovations, or DJI, which supplies over half of all drones sold in the U.S. The company eventually created a U.S. government model in an attempt to allay these concerns. Still, in January 2021, the White House signed an Executive Order that instructed executive branch departments and agencies to examine all of their current drone technologies for potential threats and banned drones and drone subsystems from adversary countries defined as Iran, North Korea, Russia, and China.

The Associated Press later reported in June 2021 that Pentagon had cleared some Chinese-made DJI drones for government use, but that report was quickly deemed inaccurate by the Department of Defense (DOD). "This report was inaccurate and uncoordinated, and its unauthorized release is currently under review by the department," the DOD said in a statement in response to the AP report. "Mitigating the threats posed by small UAS (unmanned aircraft systems), including DJI systems, remains a priority across the Department, and DOD (Defense of Defense) continues to ensure existing policy remains current and appropriately implemented," the statement continued. Reports surfaced just this month alleging DJI has attempted to obscure its ties to Chinese state-owned investment firms, and several Senators and members of Congress have since proposed legislation to further ban DJI drones.

As the cybersecurity issues related to foreign drones continue to attract attention within the U.S. government, it’s likely we will see more American-made drones like the Skydio X2D selected for programs requiring rapidly deployable scouting capabilities. The Army has been buying large amounts of small UAVs for use among regular units, and it could be that in the near term these drones become standard equipment throughout the Army, changing the way many operations are conducted.