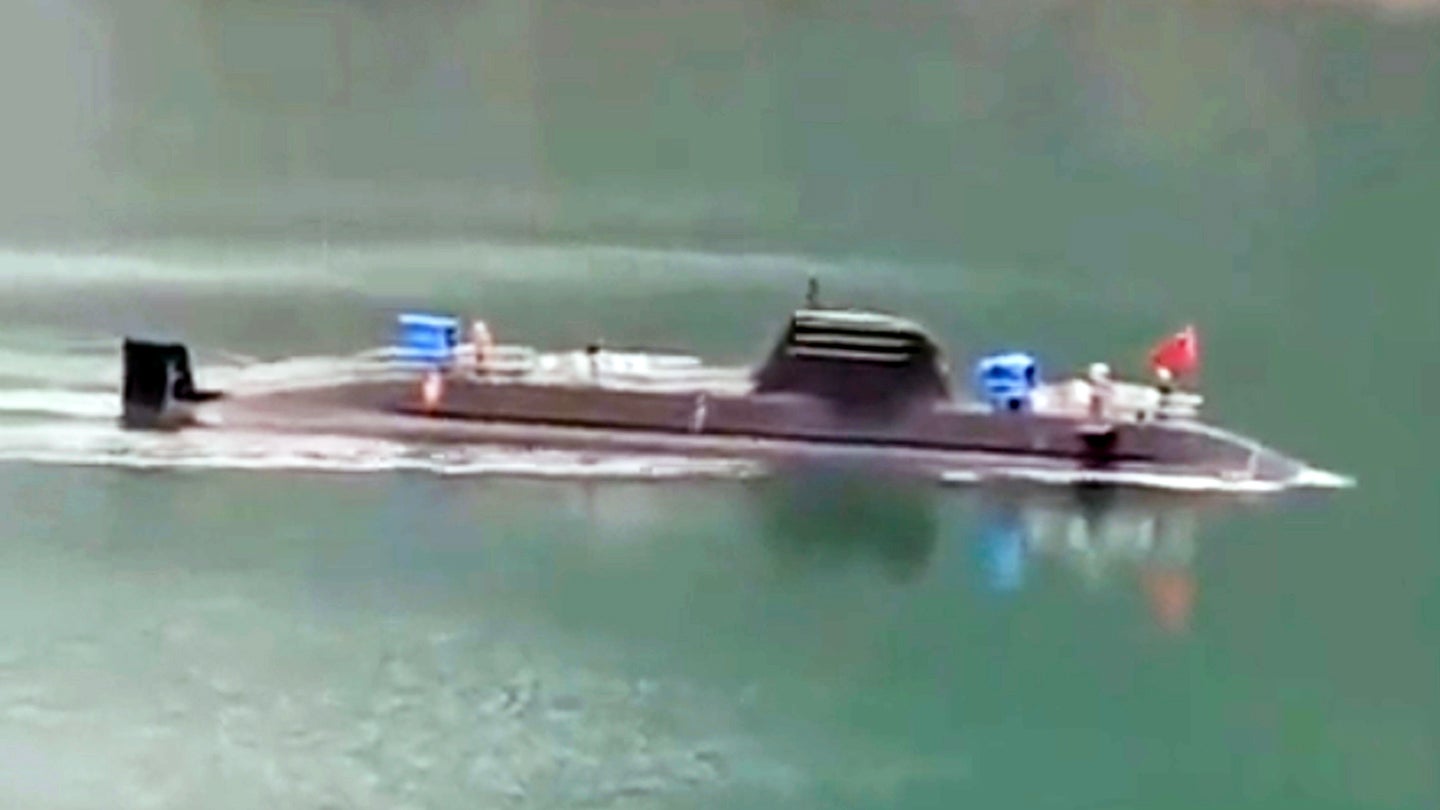 Another new and previously unknown Chinese submarine design has appeared, continuing the country’s prodigious naval shipbuilding program. The emergence of this submarine comes after a new subclass of a conventionally-powered type broke cover last year and the reveal of a highly intriguing “sail-less” design three years before that, though there are no clear indications one way or another that any of these are directly related to each other.

Video showing the new Chinese submarine underway, apparently taken during early tests, appeared earlier today on social media. The submarine is a relatively small design, likely significantly smaller than the Type 039 Yuan class, several iterations of which have already appeared. H. I. Sutton, an author and an expert on submarine warfare, estimates that the new submarine is around 160 feet long, compared to a little over 250 feet for the Type 039A.

Sutton has suggested that the size of the new Chinese submarine design might point to a relationship of some kind to the mysterious sail-less type that first appeared in 2018. Based on satellite imagery, that earlier design has been assessed as being around 150 feet long, much closer to this new boat. Sutton believes the new design likely features a single hull, which would be another parallel with the still-unnamed sail-less type, while the Type 039 features a double hull.

Of course, the presence of a sail signals a major diversion from the sail-less design, and the sail is itself noteworthy. Blending smoothly into the hull, its configuration is broadly reminiscent of those found on the German Type 212 and Type 214 designs, among others developed around the world, but which has not been seen so far on Chinese submarines. However, such a shape has previously appeared on some Chinese submarine models, including the MS200 midget submarine, S600 small patrol submarine, and the larger S1100 design, all from the China Shipbuilding Industry Corporation, or CSIC. So far, however, there is no indication that the new design is necessarily a CSIC product.

Other prominent features of the new design include dive planes fitted on the forward casing, as found on the Type 214. There are also prominent white markings on the sail, which are a regular feature of Chinese submarines during their testing phase. H. I. Sutton also told The War Zone that, based on models of similar-sized designs seen in the past, the new submarine is likely armed with four torpedo tubes without reloads.

Overall, very little is known about the new Chinese submarine, but it does yet again reinforce the fact that Beijing is investing heavily in smaller conventional submarines as well as larger nuclear-powered designs.

The latest development follows last year’s appearance of a new version of the Yuan class, known in the West, unofficially for now, as the Type 039C. The key feature of this design is the revised sail design, compared to other Type 039 boats, perhaps chosen to increase its stealth characteristics or to contain a sonar or communications system, or a combination of these.

The Type 039A/B class, of which around 17 are in service with the People’s Liberation Army Navy (PLAN), is meanwhile the current baseline standard for Chinese conventionally powered submarines and is also being built, in modified form, for export to Pakistan and Thailand.

Indeed, the success of the Type 039A/B as an export product raises the possibility that the new Chinese submarine is also intended, perhaps primarily, for sale to foreign clients. In this way, Beijing could bring a high-technology submarine design into a highly dynamic marketplace and potentially challenge more established designs from France, Russia, and Sweden, to name just a few.

At this stage, it’s not possible to determine the particular propulsion system used in the new design, although the Type 039A/B boats are already thought to use air-independent propulsion (AIP), a technology that The War Zone has examined in detail in the past. A Stirling-type engine of the type that’s thought to power the Type 039A/B submarines burns liquid oxygen and diesel to drive electrical generators that can be used for either propulsion or charging batteries. In this way, the submarine is able to remain submerged for much longer than a traditional diesel-electric boat, without needing to surface or use a snorkel.

China is also believed to be working on even more advanced propulsion technologies, including lithium-ion batteries of the type used in Japan’s latest Soryu class submarines. Compared even to some AIP configurations, these offer a number of advantages, including increased endurance at high speeds when submerged, quicker charging and longer battery life, and reduced maintenance requirements. Running on pure battery power is also the quietest option available. There has been speculation that the Type 039C may use lithium batteries, perhaps as a testbed for these and other advanced technologies that may then find their way onto production submarines.

Clearly, China still sees a place for conventionally powered submarines, whether for domestic use or for export, in stark contrast to the all-nuclear U.S. Navy. Not only are conventionally powered boats significantly cheaper to build, suiting the requirements of the fast-growing PLAN, but they also offer particular advantages for the kinds of warfare that China is likely to find itself engaged in.

Potentially quieter than nuclear-powered submarines, modern conventionally powered boats with AIP capabilities are also better suited to the shallower waters of the littoral environments that the PLAN would be expected to try and dominate as part of wider anti-access/area-denial strategies. Smaller overall hull size and reduced displacement, which the new design would appear to embody, could be ideally suited to these kinds of scenarios. The fact that these submarines could potentially be built at a significantly cheaper cost than their larger counterparts could help China achieve a greater numerical advantage over potential foes, as well.

In a report to the U.S. Congress on Chinese naval modernization published last year, it’s stated that the PLAN will field at least 25 Yuan class submarines by 2025, demonstrating the country’s impressive production output. Although it remains to be seen whether this all-new design, the improved Type 039C, or even other further developed variants enter service, it seems clear that the PLAN will continue to combine a mix of quantity and quality as it continues to ramp up its submarine capabilities.