You Can Buy This 27-Ton FBI Mobile Command Center Truck

What was one of the Bureau’s go-to command vehicles during a crisis or major event can now be had for pennies on the dollar. 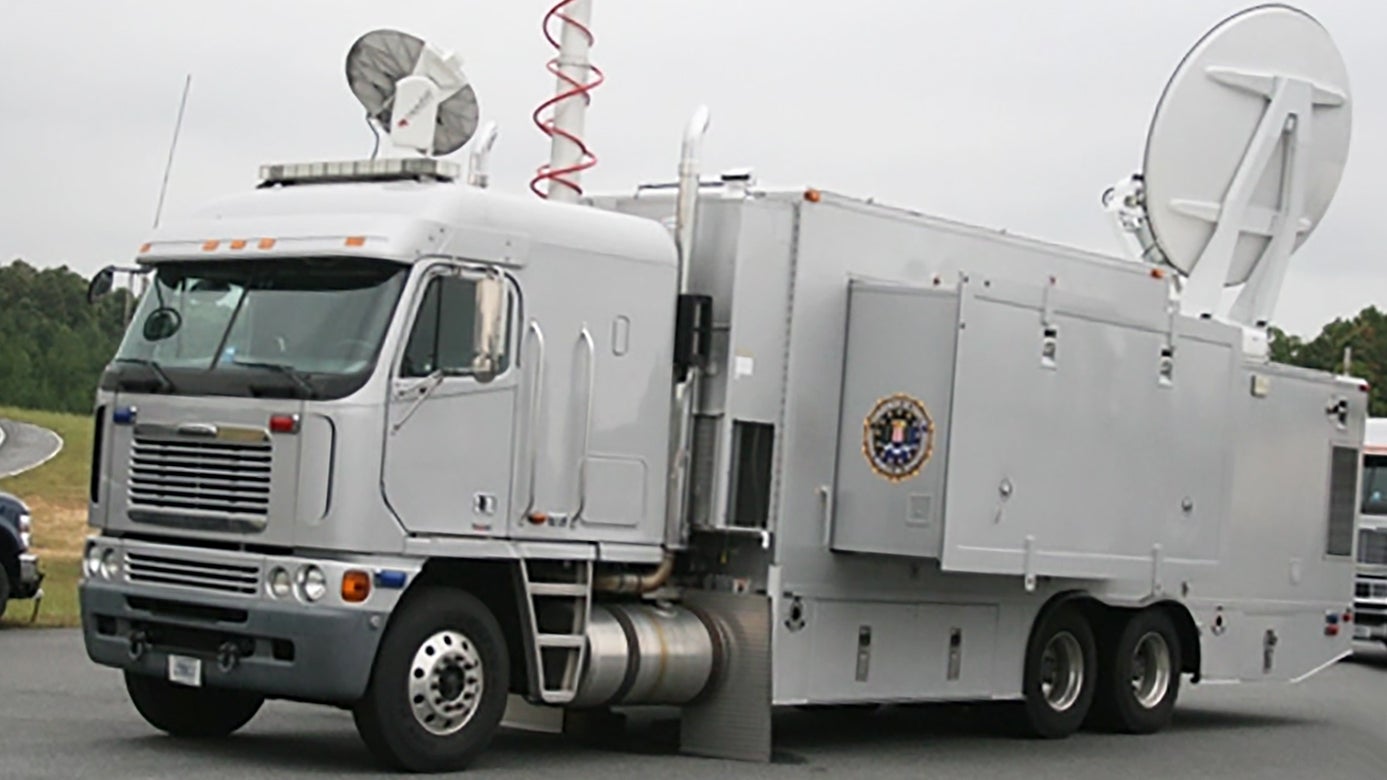 It's not often that you see specialized vehicles that once belonged to the FBI pop up at a government auction, but if you're interested and have the money to spare you can put in a bid right now on a custom 27-ton command vehicle that the Bureau has retired. The modified 2005 Freightliner Argosy has been stripped of any sensitive equipment, but still has a huge folding satellite dish at the rear and other distinct features that could help turn it into a unique RV or personal command center.

U.S. General Services Administration (GSA) is auctioning off the truck, which is presently in Auburn in Washington State and appears to have last belonged to the FBI's Seattle Field Office. It's unclear why the FBI decided to divest this vehicle, but Freightliner stopped selling the Argosy line in North America in 2006 and ended production of these trucks entirely in 2020. This may have made it increasingly costly and complicated to operate and maintain this mobile command center. Of course, the vehicle is also the better part of 20 years old now, so the Bureau may just have decided it was time to upgrade. The FBI has and continues to operate a number of different mobile command vehicles of various sizes and configurations.

At the time of writing, the top bid for the vehicle is $28,423, but this does not meet an undisclosed reserve price. We don't know how much it originally cost to acquire this mobile command post, but it's easy to find listings for second-hand tractor truck models of the Argosy line that are tens of thousands of dollars more expensive than the current top bid on this particular vehicle. It's not hard to imagine that the FBI paid exponentially more than that to buy and outfit this truck.

In addition to its 27-ton gross vehicle weight rating, this ex-FBI command vehicle, which is powered by an inline six-cylinder Detroit Diesel Series 60 engine, is 42 feet long and 13 feet, 6 inches high at its tallest. GSA doesn't say how wide it is at base, but it has two sections in the middle on each side that expand outward to provide more working space when in its deployed configuration. Red and blue emergency lights, as well as white floodlights, are located in various positions around the cab and body. The floodlights would have been valuable for supporting around-the-clock operations, especially in austere locations.

The cab has a sleeper compartment for the driver and the "trailer interior has [an] open floor plan," according to GSA's listing, which adds that there is "NO bathroom or sink." Three desks and three sets of chairs are also included in the package.

GSA says that "all FBI mission critical electronics [were] removed," but as has already been noted, the truck still has a large satellite dish on top at the rear. There is also an extendable mast behind the cab. A picture, seen below, of an FBI Argosy command vehicle from the Bureau's own website, which was taken in 2009 and may well be of the vehicle now up for auction, shows what looks to be an additional dish on top of the cab that is no longer present.

Pictures attached to the GSA listing show what looks to be auxiliary power generation systems and battery arrays still on the vehicle. These would have been necessary to support what was a robust and secure communications suite inside the truck while it was in FBI service, as well as power the expanding side sections, external satellite dishes, and extendable mast. The vehicle would have had external power outlets and cable jacks that could have been used to connect it to additional offboard systems when deployed.

The pictures available show that the vehicle does have an office-like interior with equipment racks, as well as the aforementioned desks, still in place. There is various wiring that one imagines was previously connected to an array of computers, modems, radios, and other equipment.

It is worth noting that the truck is apparently something of a fixer-upper, which might further support the possibility that the FBI was having trouble maintaining it before deciding to sell it off for good. GSA's listing describes the vehicle as "operable," but adds that the "transmission slips" and "doesn't go into drive always." There is a "need to shove in the clutch," too. Oh, and the battery in the truck's Viper Alarm System key fob has died.

Still, as long as the costs to get the truck itself running reliably are not prohibitive, it could still be a worthwhile and cost-effective starting place for another law enforcement or emergency management agency, or similar organization, looking to acquire a mobile command vehicle. There are commercial entities, such as large television stations, which often use similarly configured trucks as mobile broadcast vehicles, that might be interested, as well.

Of course, it provides ample space for conversion into something else should a buyer be interested in doing so, too. Are looking to stand out from the other RVs at the campground? It would certainly be a very different spin on the "van life" concept.

If you are interested and have the money to try and meet whatever the reserve price on this ex-FBI command truck might be, you can head over to GSA and put your own bid now, but the auction is closing soon!

The FBI’s UH-60 Black Hawks have only been seen previously in the US Army’s standard green paint scheme.