A new armored caboose is part of the Navy and the Department of Energy’s plan to make moving nuclear cargoes by rail safer from attacks and accidents. 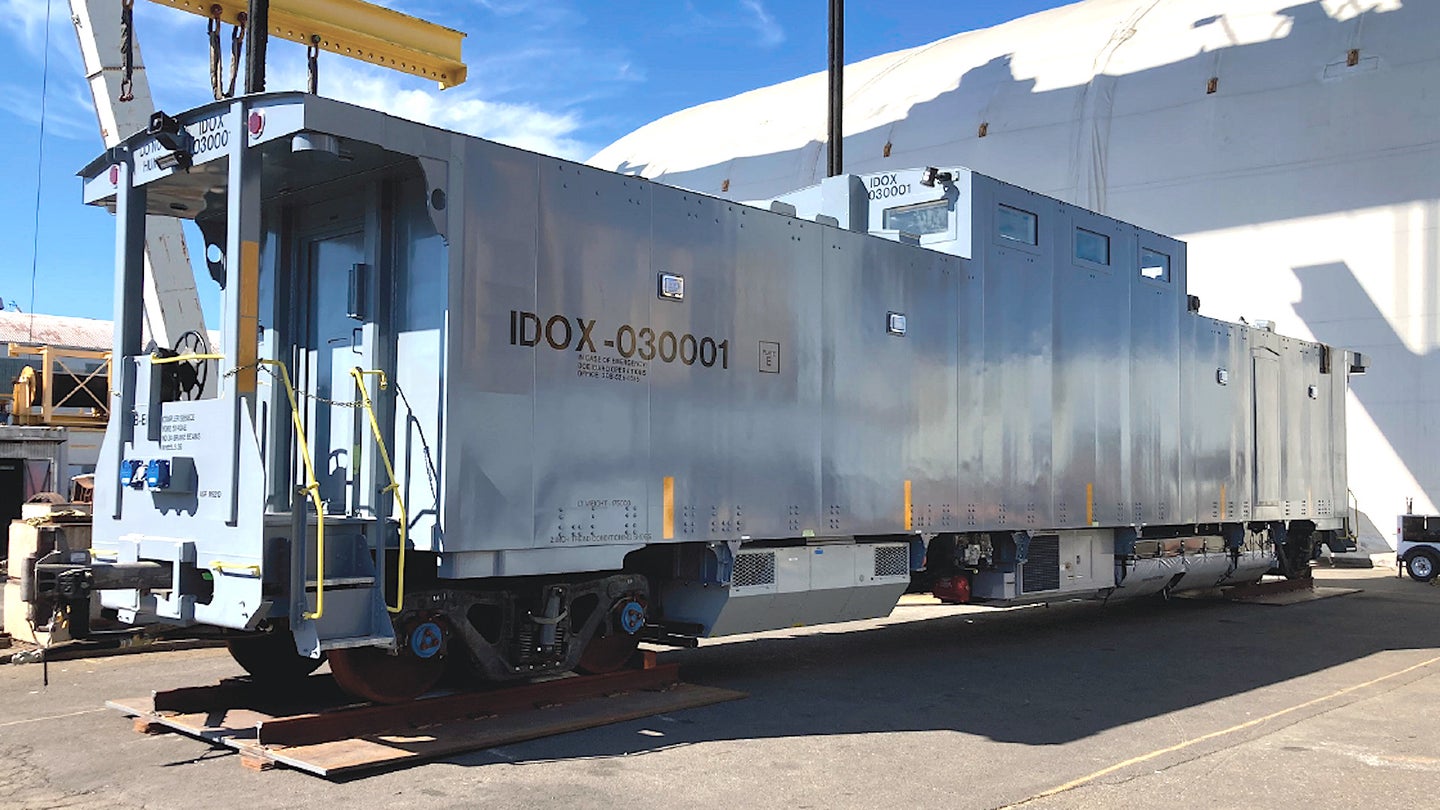 A prototype of an armored railcar that the U.S. Navy, in cooperation with the Department of Energy, developed to help protect trainloads of sensitive nuclear material is headed to Colorado to begin a final round of testing next month. The War Zone was first to report last year on this new Rail Escort Vehicle, or REV, which is set to start replacing older escort cabooses in 2024.

Earlier this month, the Department of Energy (DOE) announced that it had sent its first prototype REV, seen in a picture at the top of this story, off to the Department of Transportation’s Transportation Technology Center in Pueblo, Colorado. This particular rail car is scheduled to begin a final two-year testing phase there in February.

A DOE fact sheet says that it expects to formally take delivery of this caboose from the manufacturer, Vigor Works, a company best known for building stealthy special operations boats for the Navy, in January 2022. In addition, it says that the Naval Nuclear Propulsion Program (NNPP), a joint Navy-DOE organization more commonly known simply as Naval Reactors, is scheduled to officially receive its first REV later this year. NNPP previously told The War Zone that it was hoping to take delivery of its initial REV before the end of 2021 and have it in service soon thereafter. It is not clear what the cause or causes of this delay might be.

However, the first REV for NNPP, pictures of which led The War Zone to explore this program in the first place, has already been undergoing at least some testing, as has DOE's prototype. "The REV successfully completed structural and single-car performance testing at the manufacturer’s facility and at the U.S. Department of Transportation’s Transportation Technology Center," according to DOE's fact sheet.

Details about these cabooses and their capabilities remain limited. The DOE's fact sheet confirms The War Zone's earlier reporting that the car is just under 69 feet long and around 10 and a half feet wide, with a maximum weight of 185,000 pounds. An online database maintained by railroad company CSX also says it is almost 16 feet at its tallest.

"While the new REV provides a comfortable living and working environment for the security personnel onboard, it is no ordinary caboose," DOE said in a news release earlier in January. "The REV is equipped with security features, including cameras and communications equipment, to provide enhanced surveillance of SNF [spent nuclear fuel] shipments throughout the journey."

Interestingly, the picture that DOE has now released of its REV, which has an overall blue-gray paint job, shows that it has a slightly different configuration from the dark blue-painted NNPP example. Both cabooses have a boxcar-like armored body with what looks to be four floodlights on either side, as well as a large door on the left side. They also feature a cupola on top in the center with 10 windows, but each of the windows on the NNPP's one appears to have a firing port for a rifle or some other kind of small arm, while those on the DOE's REV do not.

What the reasons might be for this difference, and whether the DOE's version is ultimately expected to get the firing ports, are unclear. DOE has made clear that it sees the REV, in general, as a significant improvement over the older and smaller escort cabooses that are in use now.

NNPP's REVs will be crewed by "Navy personnel that are specially trained, armed, and have access to extensive and redundant communications capabilities," Lee Smith, a spokesperson for that office, told Sandboxx for a story published earlier this week. "The couriers escorting the Navy shipments are Federal Officers, provide constant surveillance, and act as first responders in the event of an issue with the transport," the Naval Reactors spokesperson told The War Zone last year. DOE employs a mix of federal employees and personnel from private security companies to guard key facilities and assets.

It is important to note that the REVs are only intended to be utilized as part of complete trains carrying loads of spent nuclear fuel (SNF) and other so-called High-Level radioactive Waste (HLW), as well new fuel and reactor components, not nuclear weapons. Though trains were used for this purpose in the past, DOE presently moves nuclear weapons and related material around the country in non-operational contexts using highly-modified armored trucks loaded with James Bond-esque defensive features, as you can read more about here.

Rail, however, does remain an important method for NNPP and the rest of DOE to move non-weapons-related nuclear cargoes to and from various locations. These payloads are still extremely sensitive and keeping them safe from attacks and accidents is a key consideration when moving them around. For instance, if a train carrying SNF or HLW were to derail or otherwise suffer significant damage for any reason, there is a possibility that a seriously disruptive radiological event might occur as a result.

DOE and NNPP have said in the past that this risk is generally low due to a variety of factors, including the design of the specialized containers that nuclear waste sits in during transit. NNPP has also specifically pointed out that nuclear fuel for reactors on Navy ships and submarines "is built to withstand combat battle shock forces well in excess of 50 times the force of gravity (more than 100 times the force of a severe earthquake)."

There are also fears that terrorists or other malign actors might seek to steal radioactive waste in order to build so-called 'dirty bombs' that are designed to spread dangerous radioactive material rather than produce a nuclear explosion. These environmental and other concerns have long prompted debate and controversy, as well as criticism and protests, in the United States and elsewhere around the world regarding the movement of nuclear cargoes by rail.

DOE and NNPP do say that the new REVs will be key components in ensuring trainloads of SNF and HLW will continue to be safeguarded as they move around the United States in the future.

"The REV is the last piece of the puzzle in completing a railcar system to safely transport the nation’s spent nuclear fuel," Patrick Schwab, the manager for a project known as Atlas within DOE’s Office of Nuclear Energy, said in a statement earlier this month. "This project is a prime example of the great collaboration between DOE and the Navy and will further serve the nation’s naval nuclear propulsion program, as well as our civilian reactors which currently supply more than half of our nation’s clean energy."

Atlas is a separate project to develop a new specialized 12-axle flatbed railcar to transport different types of standardized "casks," sealed containers designed to safely transport SNF and HLW. DOE has been exploring the possibility of acquiring a smaller 8-axle flatcar design, called Fortis, which could be cheaper and simpler to operate than Atlas, as well.

DOE has previously said that a typical SNF/HLW-carrying train in the future could consist of two locomotives, at least one Atlas car sandwiched between two empty flatbed cars as buffers, and a REV at the rear. Whether the REV works as expected as part of a full train configured this way is what the upcoming testing at the Transportation Technology Center is intended to determine. A prototype Atlas flatcar will also take part in the tests.

"As part of multiple-car testing, these railcars will be coupled together in a prototypic train setup and tested together," NNPP's Lee explained to Sandboxx. "The majority of multiple-car testing will occur on closed test track loops at the Transportation Technology Center near Pueblo, CO but will also include testing on commercial rail track, culminating in a DOE demonstration run."

By all indications this testing, which is scheduled to run through 2023, will be exhaustive. The first REVs will enter service the following year. DOE's fact sheet on these rail cars says that the current plan is to acquire one for its general use, along with five more for NNPP specifically.

Altogether, with the prototype REV now on its way to the Transportation Technology Center in Colorado, DOE and the Navy are that much closer to putting their new armored cabooses into service protecting sensitive nuclear cargoes moving along America's railways.

The Navy is a prolific user of nuclear power and needs to protect nuclear material when traveling by rail. That’s where the armored caboose comes in.