An Air Stewardess Fell 33,000 Feet And Lived To Tell The Tale 50 Years Ago Today

The story of Vesna Vulovic’s survival after a DC-9 airliner exploded in mid-air is a miraculous one. 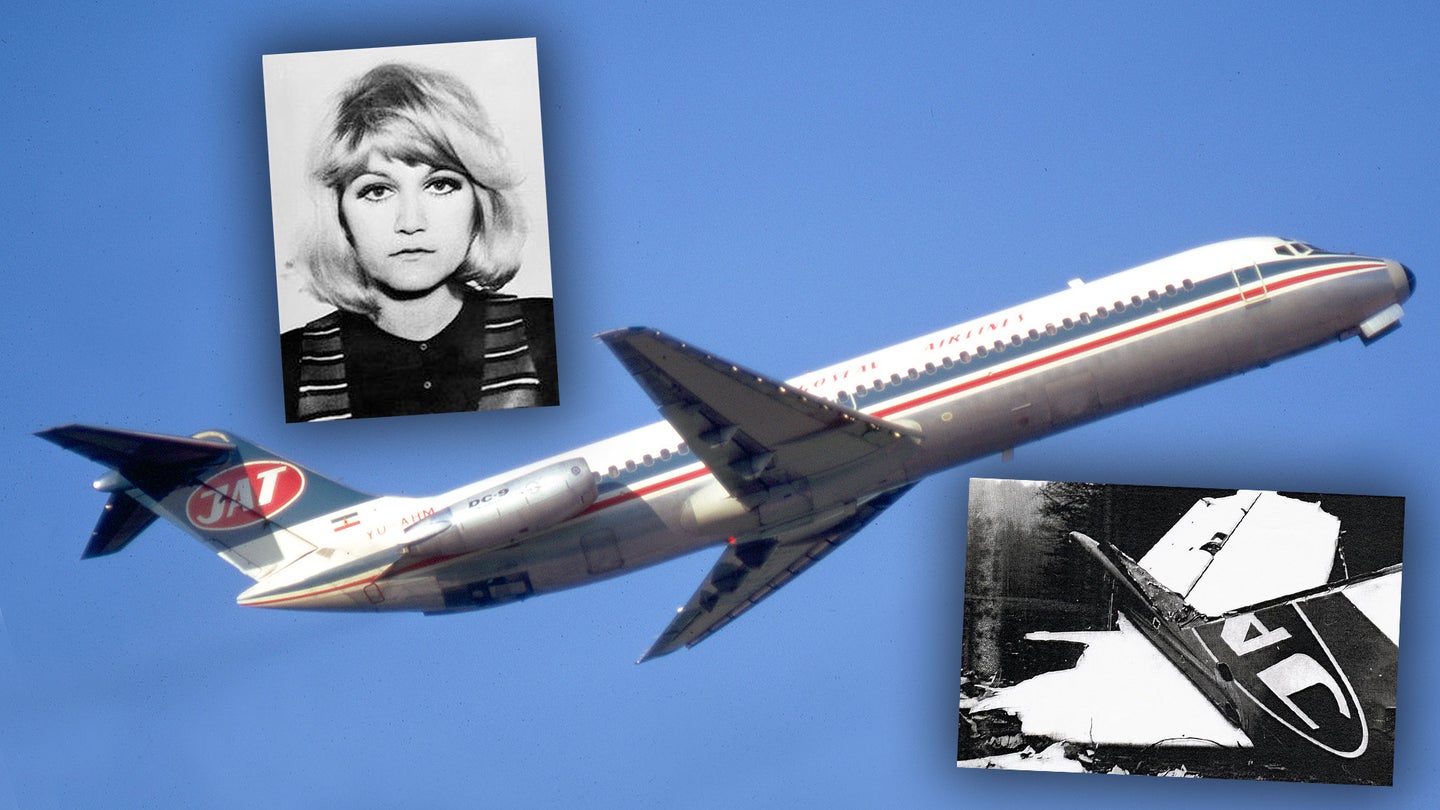 Fifty years ago today, air stewardess Vesna Vulovic plunged more than 33,000 feet from an exploding airliner, landed in a Czechoslovak mountain range, and survived. Subsequently, it was determined that Vulovic’s fall was the highest that a human has ever sustained without a parachute. But with all 27 other passengers and crew aboard the JAT Yugoslav Airlines Douglas DC-9 being killed, Vulovic’s story was not an altogether happy one.

On January 26, 1972, Vulovic was working aboard DC-9-32 YU-AHT, flying between Stockholm and Belgrade as JAT Yugoslav Airlines Flight 367, with scheduled stopovers in Copenhagen and Zagreb. Remarkably, it seems Vulovic shouldn’t even have been on the flight in the first place, with reports that she had been assigned to the five-person crew that day due to a mix-up with another flight attendant with a similar name.

Departing Copenhagen in the afternoon, the DC-9 was flying on a busy route. After checking out with the East German air traffic controllers on the border with Czechoslovakia, it should have been handed over to their Czech counterparts. They tried to contact the airliner but got no response. Alerted to the situation, the East Germans continued to track the plane after it crossed into Czechoslovak airspace before the radar contact suddenly became more prominent and then disappeared.

A suspected bomb had detonated aboard Flight 367. The airliner broke into three sections which came down around the village of Srbská Kamenice close to the East German border, in what is now the Czech Republic.

Incredibly, Vulovic was found alive, trapped by a food cart in either the center section or the tail section of the jet, depending on sources. According to the official accident report, she had fallen 33,330 feet — or 6.31 miles — to the ground.

The tail section had come down in a densely forested area, which was also covered in snow, further cushioning the impact. Although Vulovic sustained a fractured skull, two crushed vertebrae, a broken pelvis, two broken legs, and several broken ribs, she was still conscious and her cries for help had been heard in the dark by a woodsman who was among the rescue team.

Once taken to the hospital, Vulovic was in a coma for as long as a month (accounts here vary) and was temporarily paralyzed from the waist down. However, she ultimately made a near-full recovery and went back to work with JAT in a desk job.

“I was broken, and the doctors put me back together again,” she told the New York Times in 2008. “Nobody ever expected me to live this long.” However, she never regained any memory of the incident or her subsequent rescue.

It’s still unclear how Vulovic survived the impact. Although there are other examples of aircrew falling from considerable altitude, none come close to 30,000 feet. In different instances from World War II, however, a Soviet airman bailed out from around 22,000 feet and had his impact cushioned by snow. One member of a British bomber crew fell around 18,000 feet and had his landing broken by a combination of trees and snow.

The cause of the explosion on the JAT explosion is also somewhat mysterious. Officially, this was attributed to a bomb that was thought to have been placed inside the luggage hold during the stopover in Copenhagen.

Vulovic later recalled: “I saw all the passengers and crew deplane [at Copenhagen Airport]. One man seemed terribly annoyed. It was not only me that noticed him either. Other crew members saw him, as did the station manager in Copenhagen. I think it was the man who put the bomb in the baggage. I think he had checked in a bag in Stockholm, got off in Copenhagen, and never re-boarded the flight. The last thing I remember is boarding the plane by the rear door and seeing a few women cleaning the plane.”

The blame ultimately fell upon Croatian nationalists, who had been waging a campaign of violence in Yugoslavia, eventually carrying out more than 100 terrorist attacks during the 1960s and 1980s. Although an anonymous Croatian nationalist claimed responsibility for the bombing in a phone call to a Swedish newspaper, no arrests were ever made.

Years after the disaster, a Czech aerospace magazine published an article that raised the possibility of Flight 367 having been shot down in error by Czechoslovak air defenses.

A similar theory was also put forward in the German media by two investigative journalists, who claimed to have obtained documents from the Czech Civil Aviation Authority that indicated it was most likely that a Czechoslovak MiG fighter had destroyed the airliner at low altitude as it attempted a forced landing, having flown close to a sensitive military facility storing nuclear weapons. Reportedly, Soviet leader Leonid Brezhnev and his East German counterpart Erich Honecker were also in the air at the same time, following a conference in Prague, which could have explained that the Czechoslovak air defenses were jumpy.

Their theory suggested another case of mistaken identity, with the Czechoslovak authorities covering up the evidence of what really happened. To support their theory of the airliner having been shot down at low level, the journalists claimed to have eyewitness accounts suggesting the presence of another aircraft and the jet breaking up much lower than in the official account. A low-level incident would perhaps help to explain Vulovic’s unlikely survival, although such theories remain unverified and would rely on elaborate falsification of chemical traces and other evidence of an explosion on board.

As for Vulovic, she gained something like instant celebrity status as a result of the tragedy, including a place in the Guinness Book of Records in 1985 and even a folk song in her honor recorded by Miroslav Ilic, one of Serbia’s top recording artists.

Her recognition in Yugoslavia, and subsequently Serbia, where she lived in the capital, Belgrade, provided Vulovic with a platform for political causes. But involvement in the affairs of the post-Yugoslavian state was not always easy. After taking part in protests against President Slobodan Milosevic, Vulovic was fired from her airline job in 1990. Nevertheless, she remained an outspoken critic of Serbian nationalism.

In her later years, accounts of Vulovic’s life began to focus more on the psychological impact of the disaster and of her experience of survivor’s guilt. Vesna Vulovic died in Belgrade in December 2016, at the age of 66.

Her remarkable survival half a century ago means that Flight 367 is always likely to attract study, although the precise circumstances of what happened may never be fully known.

At a time of extreme Cold War tensions, straying into Warsaw Pact airspace could hardly have been more dangerous.