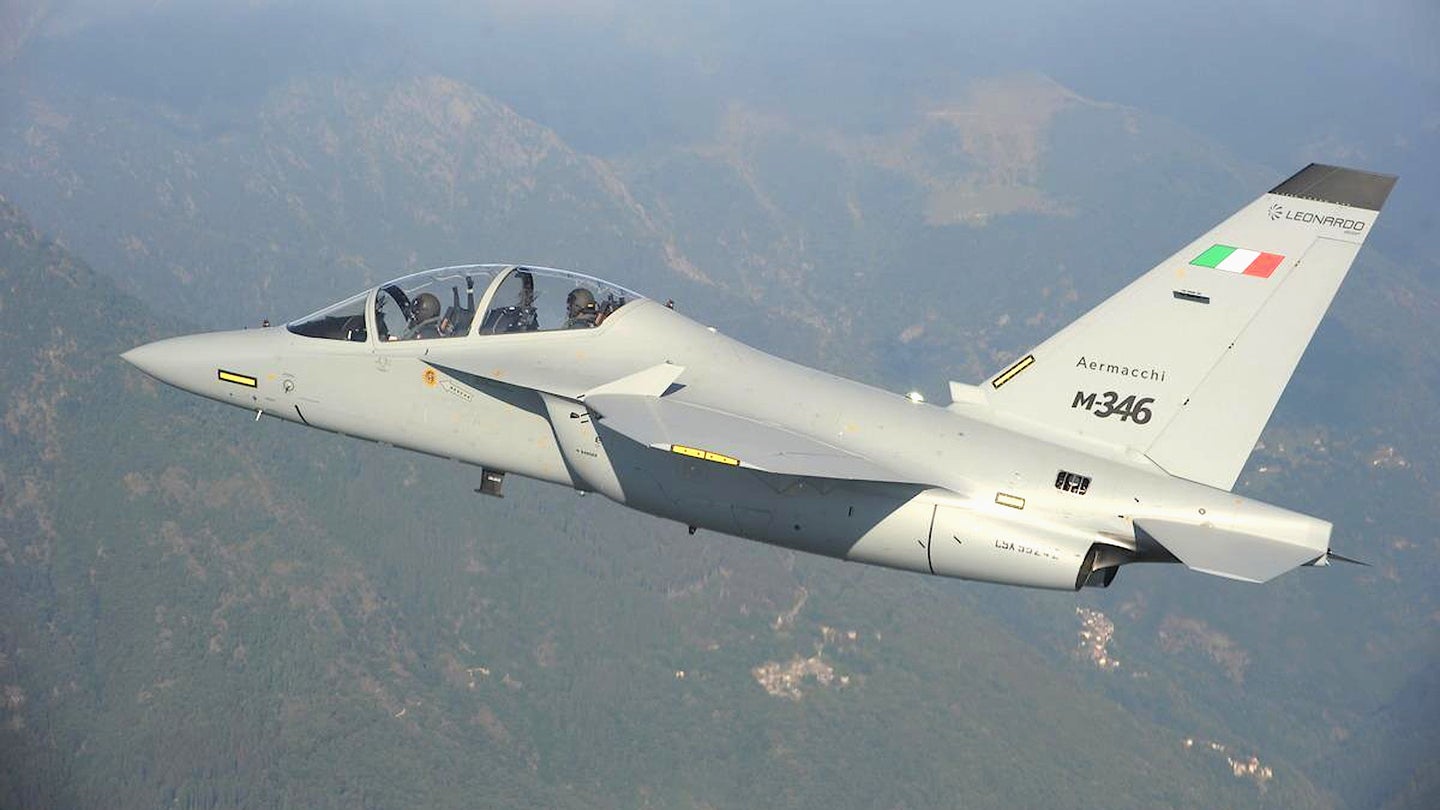 Qatar, which is in the midst of a prolific fighter procurement program, buying high-end jets from three different sources, is now adding advanced jet trainers to its fleet, filling an important gap in the inventory, and helping ensure adequate pilot numbers for its fast-expanding air force. That the Gulf state is now following a similar policy of operating a mixed fleet for its trainers is evidenced by the first appearance of Italian-made Leonardo M-346 Masters in the markings of the Qatar Emiri Air Force, or QEAF, in the Middle East.

Photos that appeared on social media today show an M-346 in Qatar, with Qatari national markings on the tailfin. The jet is part of a line-up alongside QEAF Rafale and F-15QA fighters, ahead of what looks like a military parade, likely in Doha, the Qatari capital. Doha hosts a National Day Parade in December, suggesting these photos might date from the end of last year. Another F-15QA, an NH90 helicopter, as well as Pilatus PC-21 turboprop and Super Mushshak piston-engine trainers are also present at the event, while one of the photos also shows a pair of M-346s in flight.

Qatar has not previously been identified as an M-346 operator, but Leonardo confirmed to Gareth Jennings of Janes that the Gulf state has purchased six examples of the jet trainer. According to a statement from the company, three of the QEAF M-346s “are now in Qatar.” It’s unclear if that is a temporary measure since Qatar is also training pilots on M-346s in Italy. A plan to split the small fleet between bases in Qatar and Italy would seem less likely, considering the duplication of expensive facilities that it would entail.

In November 2020, officials from the Qatar government and the Italian Ministry of Defense reportedly signed an agreement for QEAF pilots to train at the multinational International Flight Training School, or IFTS, at Lecce Air Base in Italy, the fleet of which includes M-346s. This unit provides advanced or lead-in fighter training (LIFT) to both the Italian Air Force and third-party customers, which so far also comprise Germany and Japan. The same month, the Qatari and Italian foreign ministers apparently met in Doha to sign a contract on the sale of the reported six M-346s, although this deal was never publicly announced.

It’s possible that the QEAF markings that also appear on at least one of the M-346s may be temporary, perhaps only being applied for the military parade. According to a close observer of the M-346 program, speaking confidentially to The War Zone, the Qatari jets otherwise look the same as their Italian Air Force counterparts, but without Italian national roundels, and they wear Italian military registrations and codes. The logo of the IFTS is also visible on the tailfin M-346 seen on the ground in Qatar.

Regardless of their ultimate destination, four M-346s are understood to have been delivered to the IFTS in Lecce so far. Furthermore, at least six QEAF pilots had reached the final stage of their IFTS advanced training course by late September last year, according to AirForces Monthly.

According to a statement from Leonardo, three of the QEAF M-346s from the six ordered for Qatari pilot training at the IFTS “are now in Qatar.” It’s unclear if that is a temporary measure, or whether there will be separate Qatari training efforts on M-346s in Italy and in the Middle East. That would seem less likely, considering the duplication of expensive facilities that it would entail.

The M-346 is a modern advanced jet trainer that features fully digital flight controls and avionics to replicate frontline fighters, including fifth-generation types. The student is provided with a head-up display (HUD) and multifunction displays (MFDs), as well as hands-on throttle and stick (HOTAS) controls and in-flight safety features including a pilot-activated attitude recovery system (PARS). The jet is intended to be operated as part of a wider Ground-Based Training System (GBTS) that employs live, virtual, and constructive (LVC) elements to emulate sensors, weapons, and enemy forces.

The M-346 has already won orders from Italy, Israel, Poland, and Singapore, among others. A version competed unsuccessfully for the U.S. Air Force’s T-X requirement, initially being offered by Raytheon and Leonardo, and subsequently by the Italian firm alone.

As well as the M-346, Qatar also operates BAE Systems Hawk Mk 167, another advanced jet trainer, with nine examples ordered, also for the LIFT role. Since September 2021 the Qatari Hawks have been flown by a joint British-Qatari training squadron at RAF Leeming in North Yorkshire, England, which includes Qatari instructor pilots and which trains pilots for the U.K. Royal Air Force as well as the QEAF.

The Hawk training unit has some parallels with the arrangement under which QEAF Typhoon pilots are training on that type in the United Kingdom, with another joint British-Qatari squadron, pending the arrival of Typhoons in Qatar later this year.

This two-track approach to training fast-jet pilots outside the country aims to offload some of the burdens on the QEAF’s in-house advanced training, which employs 24 Swiss-made PC-21 turboprops at the Armed Forces Air Academy at Al Udeid Air Base. As well as the additional capacity, the M-346 and Hawk also both offer performance that’s closer to the kinds of fighters that frontline QEAF pilots will fly.

Having advanced training ‘hubs’ in both Italy and the United Kingdom, and, in the future, in Qatar, should also help ensure that it’s able to meet its fast-growing demand for pilots. In the years to come, the QEAF fighter fleet alone will more than triple in size.

Acquiring fighters and trainers from multiple sources could also be useful if political events conspire to close off the supply of aircraft maintenance and support from any one of these countries. In the past, Qatar has been accused of supporting terrorist groups, which led to a diplomatic crisis beginning in 2017, when Saudi Arabia, the United Arab Emirates, Bahrain, and Egypt, among others severed diplomatic relations with the country and instituted a regional blockade against it. The situation was normalized last year. However, the unpredictable geopolitical situation in the Middle East means that disruption of this kind is not altogether uncommon.

The flip side of the growing diversity of the QEAF fleet is the increased logistical and maintenance demands that would be ameliorated with a more consolidated force.

In the past, there has been speculation that additional pilots might have to be brought in from other countries to operate a force that will eventually include 36 Rafales, 36 (or even 48) F-15QAs, and 24 Typhoons; the QEAF also currently operates a dozen older Mirage 2000-5s. The expanding military relationship between Qatar and Turkey has led to speculation that Turkish Air Force pilots might be seconded to the QEAF. There is no confirmation that this is happening yet, although there is at least a precedent of a kind. When the QEAF set up its academy at Al Udeid, it brought in, under contract, at least half-a-dozen highly experienced instructor pilots who gave up their posts with the Croatian Air Force, although these are in training rather than operational roles.

Now, however, the training models offered by the IFTS in Italy and the Hawk squadron in the United Kingdom would appear to offer an attractive solution, with the costs of infrastructure, including simulators, shared and with the opportunity to draw on experienced instructor cadres in these respective countries. Since Qatar has purchased the M-346s and Hawks, it’s also possible that they could be transferred to an in-country base in the future.

After much-publicized, multi-billion-dollar efforts to bolster its capacity with new fighter jets, Qatar is now getting the training aircraft it needs as it aims to fulfill its ambition of becoming one of the most capable air forces in the Middle East.