The Navy is signaling its powerful Pacific presence to China even as the world is focused on Russia’s actions near Ukraine. 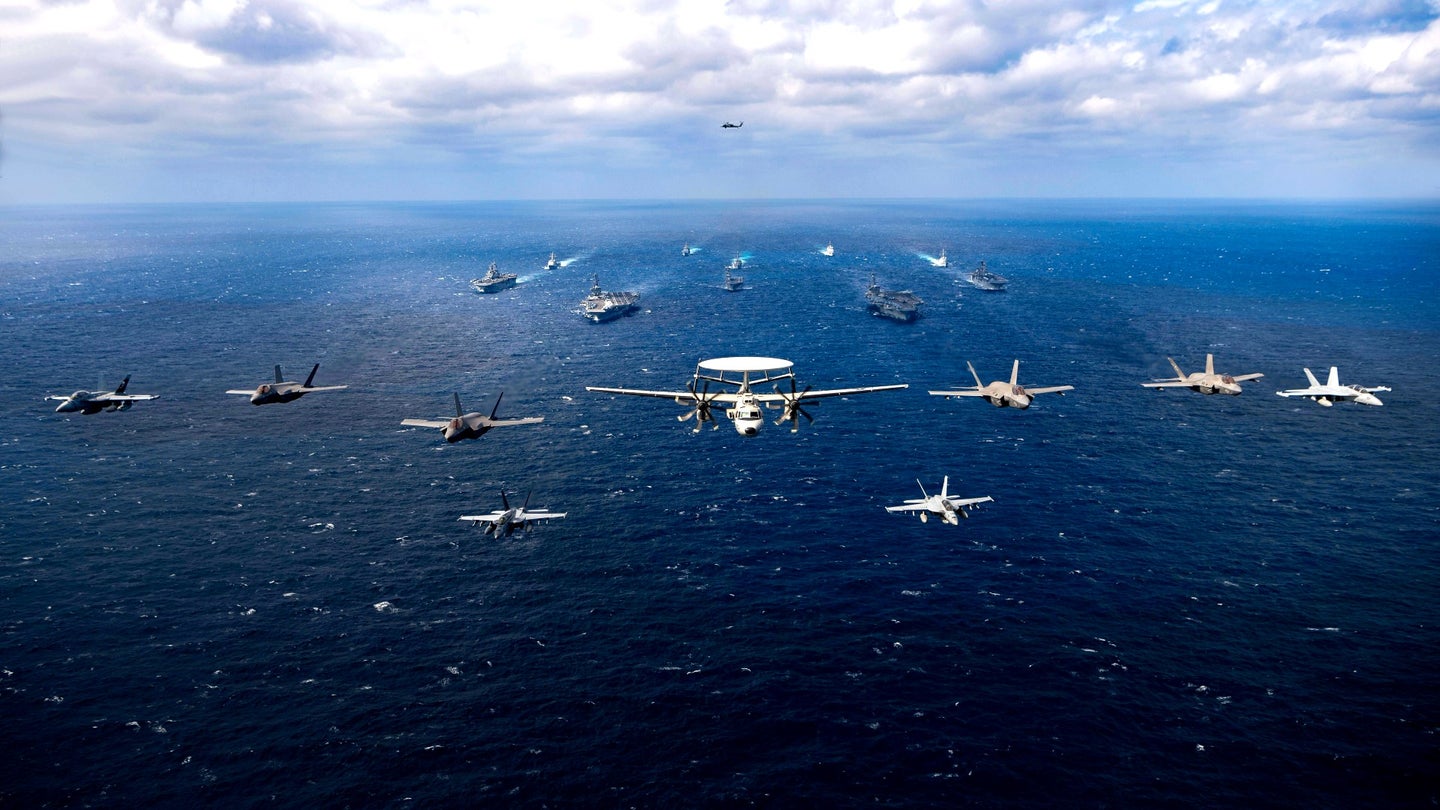 The U.S. Navy has released footage of an absolutely massive joint show of force in the Philippine Sea that included two Carrier Strike Groups, two Amphibious Ready Groups, and a ‘helicopter destroyer’ from the Japanese Maritime Self-Defense Force (JMSDF). In the days following this exercise, China sent dozens of aircraft into Taiwan’s air defense identification zone, or ADIZ, which included a rare appearance of the Shenyang J-16D electronic warfare (EW) aircraft in its first known Taiwanese ADIZ incursion. Today, the Navy directed both carrier groups into the South China Sea, the northeastern corner of which is inside Taiwan's ADIZ.

In a release published today, the U.S. Navy says Carrier Strike Group (CSG) 1 led by USS Carl Vinson, and CSG-3 led by USS Abraham Lincoln have now begun dual-carrier operations. Rear Adm. J.T. Anderson, commander of CSG-3, says that the operation is intended to “improve our combat credible capability, reassure our allies and partners, and demonstrate our resolve as a Navy to ensure regional stability and counter malign influence."

Rear Adm. Dan Martin, commander of CSG-1, says the dual-carrier operation “highlights the U.S. Navy’s ability to deliver overwhelming maritime force, when called upon, to support a free and open Indo-Pacific region” and shows the service’s commitment to “deterring those who challenge the shared vision of a free and open Indo-Pacific now and into the long-term future.”

“Nothing reaffirms our commitment to a free and open Indo Pacific like [two] Carrier Strike Groups, [two] Amphibious Ready Groups sailing alongside our close friends from the Japan Maritime Self Defense Force,” said Vice Adm. Karl Thomas, Commander, U.S. 7th Fleet, in a Facebook post dated January 22 that included images from the exercise.

Submarines are known to accompany carrier strike groups and amphibious ready groups, although the Department of Defense does not typically publicize their presence.

On January 24, 13 Chinese aircraft entered Taiwan's air defense identification zone once again, this time including two J-16D electronic attack/electronic warfare aircraft. This is the first time these new aircraft have appeared during one of these incursions, a potential sign that more of these new J-16 variants are operational and ready to be deployed.

The J-16D reportedly made its first flight in December 2015 and features a radome design distinctly different from the base J-16 that points to the EW aircraft having an advanced active electronically scanned array (AESA) radar. The exact capabilities of the J-16D, which is often compared to the U.S. Navy’s EA-18G Growler, are unknown, though the aircraft has been seen at airshows carrying at least three different electronic warfare pods.

The addition of aerial electronic warfare support would factor heavily into any potential Chinese military intervention across the Taiwan Strait given the island’s significant air-defense capabilities. The new appearance of the J-16D reflects comments made by US Air Force leadership in recent years that the United States is "out of time" in terms of the PLA catching up to the modern capabilities of the U.S. military, at least in some respects.

Those Chinese flights came on the heels of previous U.S. Navy joint exercises conducted with the Japan Maritime Self Defense Force which took place last week in the Philippine Sea. That exercise brought together the largest operational gathering of naval F-35s to date, with 10 F-35Cs from Strike Fighter Squadron (VFA) 147, 10 Marine Corps F-35Cs flying on behalf of Marine Fighter Attack Squadron (VMFA) 314, and six Marine Corps F-35Bs aboard USS America (CVA/CV-66). CSG-1 and CSG-3 were joined in those exercises by the Japanese vessel JS Hyūga (DDH-181), a helicopter-equipped destroyer with the ability to fire anti-submarine and anti-aircraft missiles from its vertical launch system, and Japanese guided missile destroyer JS Myoko (DDG-175). The inclusion of Japanese naval forces in these exercises shows the U.S. ally is at least trying to take a more proactive role in the maritime domain when it comes to China.

Last week, the U.S. Navy denied Chinese reports that the People’s Liberation Army Navy repelled the Arleigh Burke-class destroyer USS Benfold as it conducted a freedom of navigation operation (FONOP) near disputed islands in the South China Sea. In a statement, U.S. 7th Fleet spokesperson Lt. Mark Langford refuted the claims, stressing that the FONOP was conducted in accordance with international laws and that “Nothing [China] says otherwise will deter us.”

After these most recent Chinese incursions into Taiwan’s ADIZ, the U.S. Navy has decided to bring the two carrier groups westward, directly into the South China Sea where tensions continue to grow. Both U.S. and Chinese forces have been increasing their presence throughout the region as the future of the South China Sea and regional stability hangs in the balance. The People’s Liberation Army has been sending record numbers of aircraft through Taiwan’s ADIZ in recent months as worries about a Chinese invasion of Taiwan continue to loom large.

As a result, Japan and the United States are reportedly in talks to stockpile munitions together throughout the region to be used in the event of a conflict over Taiwan. Anti-ship missiles, in particular, would no doubt be in high demand during any potential conflict to try and counter or slow an advance by the People's Liberation Army Navy.

While The Navy’s publicized multi-carrier operations are no doubt meant to send a message to Chinese leadership in Beijing, last week, the Navy published several images of the Ohio class USS Nevada (SSBN 733) as it visited Guam. This rare disclosure was widely thought to be a reminder to China and U.S. allies of the powerful second-strike deterrent that the United States has deployed to the Pacific at any given time.

While many eyes are currently on the naval forces massing in and around the European region, the Navy’s show of force in the Pacific signals that no matter what is happening in other areas of operations, ensuring the security of the Indo-Pacific region remains at the top of the Pentagon’s priorities.

An F-35C Joint Strike Fighter was involved in a crash while landing aboard USS Carl Vinson today. The pilot is in stable condition after ejecting from the aircraft, and seven other sailors were injured as a result of the accident. Three of the injured were evacuated to a medical facility in Manila in the Philippines, while the four others were treated aboard USS Carl Vinson. Read more about the ongoing incident here.