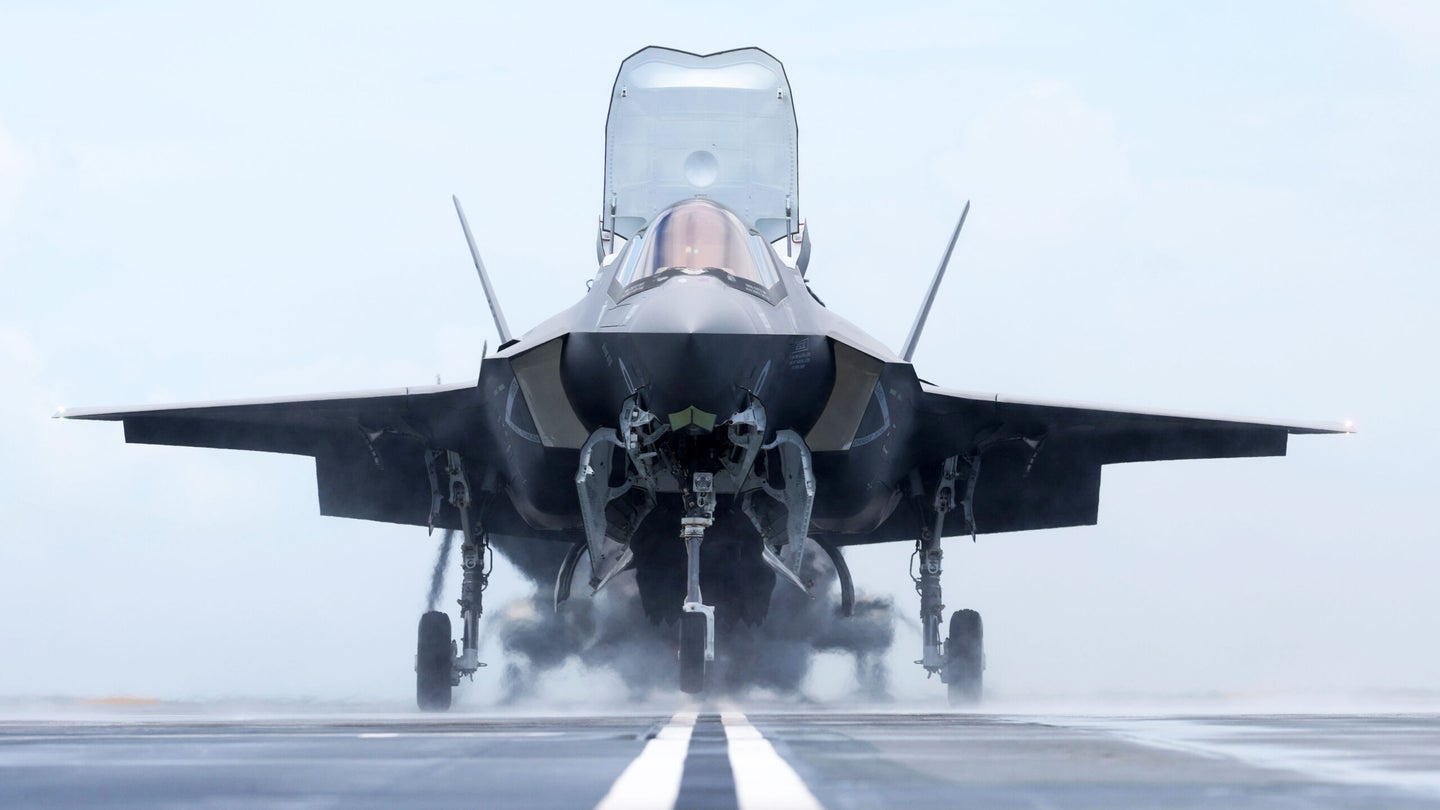 A photo has appeared online showing the recovered wreckage of the British F-35B stealth jet that crashed into the Mediterranean Sea while taking off from the Royal Navy aircraft carrier HMS Queen Elizabeth during its debut operational cruise last November. The fighter had originally been brought to the surface in December, as we reported here, but any kind of imagery of the salvaged jet had not appeared in the public domain until now.

The provenance of the latest photo is unclear, but it has now been shared on different social media accounts. The photo, taken from a vessel used in the recovery process, shows the F-35B laying on its back on the deck, with its landing gear extended and weapons bays doors open. The forward fuselage with its cockpit section is not visible, but the aircraft seems to be largely intact.

The photo shows the serial number ZM152 on the jet, as had been previously confirmed by the government.

ZM152 had crashed while operating from the Royal Navy’s flagship when it was underway in the eastern Mediterranean on November 17 last year. An early report suggested that the aircraft ingested an air intake cover and that the pilot had unsuccessfully attempted to abort the takeoff after it became clear that the jet would not reach sufficient speed to get airborne. The pilot was forced to eject, coming down safely on the carrier.

Footage that appeared in November showed the final moments of the jet, the video in question having apparently been captured on a cell phone from the video camera system on HMS Queen Elizabeth.

Successfully locating the remains of the aircraft and retrieving them quickly became a top priority given the operational security risks that would have been posed if any part of the plane had fallen into the hands of a less than friendly country, such as Russia.

The United Kingdom approached the United States for assistance in retrieving the F-35B from the seafloor, with the U.S. Navy providing salvage equipment located in Spain, including the Towed Pinger Locator 25, or TPL-25, which can detect the signal from an emergency beacon and pinpoint its position.

Two weeks were required to locate the wreck on the seafloor and then another week to bring it up to the surface. The U.K. Ministry of Defense confirmed on December 7 that the recovery operation required had been completed.

The fact that ZM152 was one of the newer F-35Bs to have been delivered to the U.K. Royal Air Force, in June 2019, means the loss of the jet is a greater blow to the service and the U.K. Armed Forces in general. However, with early indications apparently pointing to human error being the cause of the accident, the overall impact on F-35B operations is likely to be limited.

Having been built as BK-18 under Low-Rate Initial Production (LRIP) 11, ZM152 is at a higher systems standard than jets delivered earlier, meaning it would have cost less and been more straightforward to upgrade it to the definitive Block 4 standard, which you can read more about here. The U.K. government had previously disclosed that it was not necessarily committed to eventually bringing all 48 of its F-35Bs to this standard, but ZM152 would likely have been an obvious candidate for the upgrade.

Moreover, the loss of any F-35Bs is bad news for the U.K.’s Joint Strike Fighter effort, with a continued question mark over the total number of jets that will be acquired. The U.K. government had long planned to buy 138 F-35Bs but has only committed to buying 48 by the end of 2025. Last year it was reported that a full 90 aircraft could be cut from the total buy, as the U.K. Ministry of Defense grapples with increasingly tight budgets.

The U.K. government’s Integrated Review Command Paper, published last year, did commit to increasing the F-35B fleet size beyond the 48 already ordered but didn’t provide any more details on numbers, and there is a tacit acknowledgment that the planned 138-aircraft figure has been abandoned.

Whatever the ultimate size of the U.K. F-35B fleet, it seems that the dramatic fate of ZM152 is continuing to overshadow what was otherwise deemed a very successful first operational cruise by HMS Queen Elizabeth. Meanwhile, the cause of the loss of the jet remains under investigation.