The second-hand E-3 aircraft could give the Chilean Air Force a significant boost in capability and allow it to retire an existing aging radar plane. 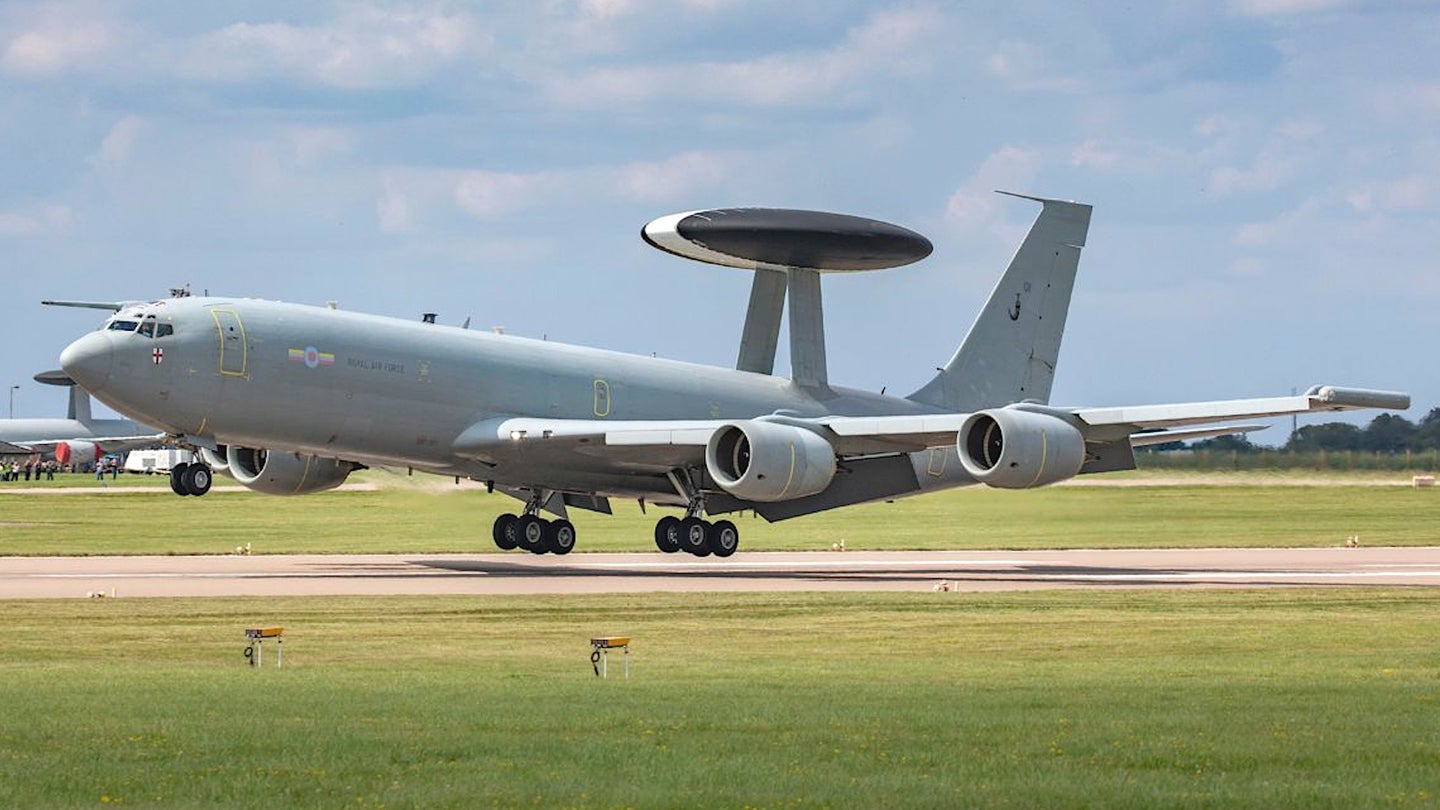 The Chilean government has reportedly purchased three ex-U.K. Royal Air Force E-3D Sentry Airborne Warning And Control System, or AWACS, radar aircraft. These aircraft would give the Chilean Air Force a significant boost in command and control, aerial surveillance, and early warning capabilities, and would allow the service to replace its lone aging Boeing 707-based Condor airborne early warning and control jet.

Multiple outlets reported the sale of the three RAF E-3Ds to Chile this week, though the purchase does not yet appear to have been publicly confirmed by either the U.K. or Chilean governments. The Chilean Air Force's plan is to put two of the jets into service and use the third as a source of spare parts, according to Janes. The total value of the deal has not been disclosed.

The RAF first began operating its Sentries in 1991, a fleet that consisted of seven aircraft at its peak, but had increasing difficulty maintaining them. By December 2020, only three were still flying and the British retired the type for good the following year. The RAF is now set to receive new Boeing 737-based E-7 Wedgetail airborne early warning and control aircraft as replacements, with the first example expected to enter service in 2023.

The U.S. Navy has already bought one of these jets for conversion into a dedicated trainer for crews that will fly its E-6B Mercury jets, so-called 'doomsday planes' that act as airborne command posts for America's nuclear deterrent forces. The E-3D and E-6B are both based on the Boeing 707.

Chile is certainly not a customer one might necessarily expect to be in the market for second-hand Sentries. However, as noted, the country's air force does already fly a 707-based airborne early warning and control aircraft known as the Condor.

Condor is a fairly advanced platform that carries an Israeli-made Elta EL/M-2075 Phalcon L-band active phased-array radar system. It consists of six separate antenna arrays, one in a distinct bulbous nose section on the aircraft, another pair in each of two large cheek fairings on either side of the fuselage, and another under the tail. It is capable of tracking both aerial targets and ones at sea, and reportedly has some degree of electronic intelligence gathering capability. The jet also has robust command and control abilities.

Condor only entered service in 1994, following a conversion process that began in 1989, but the underlying aircraft is much older. The jet was built in 1965 and served as a Boeing demonstrator and testbed before being sold to what was then the LAN-Chile airline, Chile's flag carrier, in 1969. LAN-Chile has since evolved into LATAM Chile.

By all indications, the Condor, which is still powered by 1950s-era Pratt & Whitney JT3D low-bypass turbofans, has become increasingly costly and complex to maintain. The Phalcon is likely equally complicated to keep in service, with only three jets, the other two of which are in Israeli service, every having been fitted with it.

The RAF's E-3Ds, though also based on the 707 airframe, are more modern aircraft and feature more fuel-efficient high-bypass CFM56 engines. The Sentry features a single AN/APY-2 passive electronically scanned array radar in a radome on top of the rear of the fuselage, capable of tracking targets in the air and at sea below, as well as an extensive communications suite to support its command and control functions.

The RAF notably did not put its E-3Ds through any major upgrade programs, unlike the U.S. Air Force and other air forces around the world still flying E-3 variants. The Chilean Air Force might look to put them through some sort of modernization program before actually putting them into service.

Still, the E-3Ds have a clear potential to give the Chilean Air Force a valuable capability boost. In addition, having two operational E-3Ds rather than just the one Condor would provide valuable additional capacity, with the jets being able to cover multiple areas for certain periods simultaneously or swap out to provide more persistent coverage in a single region. Just being able to have a backup airborne early warning and control aircraft at all makes this a significant acquisition.

All of this would give the Chilean Air Force a greater ability to actually employ airborne early warning and control capabilities to provide surveillance over and around the country and to direct and manage fighter jets during contingencies. Chile's fighter fleets currently consist of around 46 F-16 Vipers and some 12 upgraded F-5E/F Tiger III+s. The F-16 fleet consists of 10 Block 50 F-16C/D jets and 36 older Block 20 F-16AM/BM aircraft. Two years ago, Chilean authorities announced they had pushed back a plan to upgrade at least a portion of its Viper fleet.

This added capacity could be particularly useful for Chile, in general, which is very mountainous and has an extremely long Pacific Ocean coastline. The ability to "look down" is particularly valuable when searching for and tracking smaller, low-flying targets, especially in mountainous regions. E-3s have been known to use their capabilities to help monitor for small aircraft, as well as boats, involved in drug smuggling and otherwise coordinate counter-drug operations, something that could certainly be of interest to Chilean authorities, too.

Of course, when the Chilean Air Force will actually begin operating any ex-RAF E-3Ds remains to be seen. It's not entirely clear where in the purchase process Chile is and the sale will also require approval from the U.S. government. There is no indication, one way or another, that the Chileans will have trouble getting that authorization, but it can be a time-consuming bureaucratic process. Janes did report that there is a hope that Sentries will be flying in Chile by the end of the year.

If everything goes to plan, a portion of the RAF's now-retired E-3D fleets could be set to get a new lease on life in Latin America.

Unwanted British Sentinel Radar Planes To Be Picked Up By US Army: Report

The Sentinel Airborne Stand-Off Radar aircraft, controversially retired earlier this year, may now be headed to the United States.