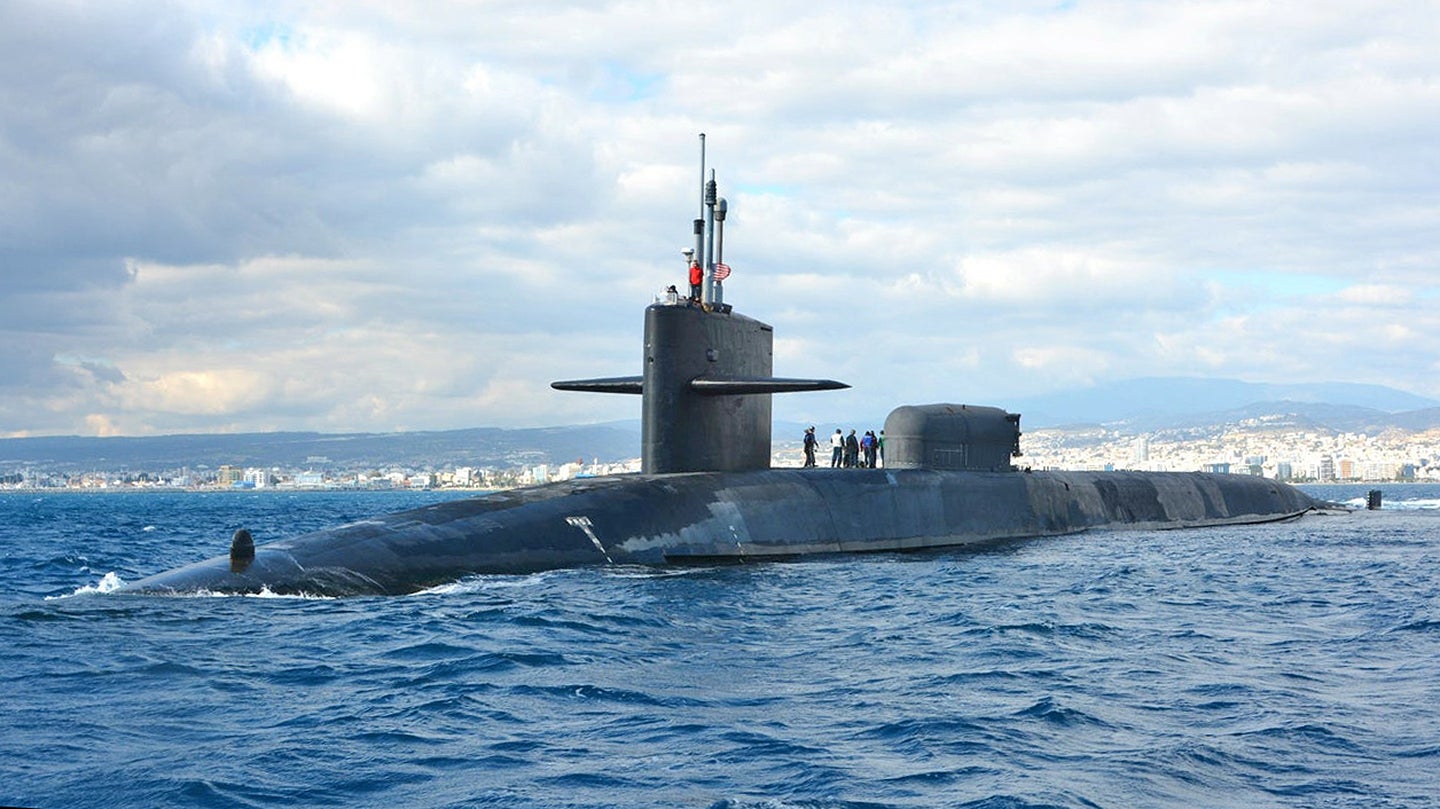 The U.S. Navy’s Sixth Fleet has offered an unusual public disclosure of the location of USS Georgia (SSGN 729), one of four of the service’s converted Ohio class nuclear-powered guided-missile submarines, or SSGNs, as it conducted a brief stop near the island of Cyprus. These rare disclosures tend to occur at times of heightened international tensions. With the situation in Ukraine quickly approaching an outright crisis, it’s likely that the Navy intended for this glimpse at Georgia to serve as a signal to both allies and Russia that the United States has a highly capable presence in the region that can reach out and strike over long distances with little risk to itself.

The USS Georgia’s appearance was made public on Twitter by U.S. Naval Forces Europe-Africa/U.S. Sixth Fleet. Along with three images of Georgia, the accompanying tweet stated that the visit occurred on January 15 near the city of Limassol. The exact location Georgia visited in Cyprus wasn’t disclosed, but U.S. Naval Forces Europe-Africa/U.S. Sixth Fleet is known to conduct training and logistical operations at Naval Base Lieutenant General Evangelos Florakis in Mari, Cyprus some 16 miles from Limassol.

Georgia’s visit to Cyprus coincides with the ongoing deployment of USS Harry S. Truman, the lead ship of Carrier Strike Group (CSG) 8, to the Mediterranean. In December 2021, U.S. Secretary of Defense Lloyd Austin ordered the strike group to remain in the Mediterranean instead of carrying out its planned deployment to the Middle East. As of January 18, the carrier strike group was still deployed to the Mediterranean alongside a Royal Norwegian Navy frigate. An unnamed official told USNI News that the decision was made in order to reassure European allies of U.S. commitment to regional security.

This isn’t the first time the Navy has publicized the presence of one of its prized Ohio class guided missile submarines, but the occasions are far and few between.

USS Michigan (SSGN 727) famously made a high-profile visit to South Korea in 2017 at the height of U.S.-North Korean tensions, when the Kim Regime threatened a missile launch toward Guam.

In 2019, the Navy released images of the USS Florida (SSGN 728) as it operated in an undisclosed location in the Mediterranean while the Russians were operating their own naval task force in the region.

USS Georgia made another highly publicized appearance in December 2020 when it passed through the Strait of Hormuz alongside two Ticonderoga class cruisers, USS Port Royal and USS Philippine Sea, amid a spike in tensions between the United States and Iran.

Strategic appearances of other types of submarines occur as well. Last year, the Navy released images of the USS Seawolf operating near Norway that was seen as a pointed signal to the Russian Navy's Northern Fleet, as well as images from a 2021 training exercise the Virginia class USS New Mexico conducted in the Mediterranean in which Navy SEALS executed diving operations from the submarine. In June 2021, the USS Alaska, an Ohio class ballistic missile submarine, or SSBN, made an unusual stop in the British Overseas Territory of Gibraltar to demonstrate U.S. capability in the region and commitment to NATO.

More recently, the Navy published a press release showing several images of the Ohio class USS Nevada (SSBN 733) as it visited Guam, meant to reflect the United States’ commitment to the Indo-Pacific region and a reminder to China and Russia of the immense second-strike deterrent available to the United States at any given time.

Once again, the USS Georgia is one of the Navy’s four SSGNs, Ohio class submarines converted to enable a host of new capabilities. They are some of the most elite and high-demand vessels in the fleet.

The SSGNs were given unique special operations mission centers and mission planning spaces, additional sensor and communication systems, and other modifications to allow them to operate undetected and in shallower waters than their Ohio SSBNs counterparts. Based on statements made by Navy leadership after the large-scale Silent Hammer experiments in 2004, a large focus of the conversion from SSBN to SSGN was to enable these boats to serve as clandestine intelligence-collection platforms.

22 out of the SSGN's 24 missile tubes are now capable of launching up to seven BGM-109 Tomahawk cruise missiles rather than the nuclear-armed Trident submarine-launched ballistic missiles (SLBMs) fired by Ohio SSBNs, while the remaining two missile tubes were converted lockout chambers for embarked SEALs.

Two dry deck shelters can be installed atop the SSGN's hull while linked to the lockout chambers, allowing Navy SEALs to enter or exit the shelters and deploy and recover swimmer delivery vehicle mini-submarines. It’s possible that more exotic payloads could be adapted for use in these modified missile tubes and dry dock shelters, as well. You can read all about the origins and unique capabilities of the SSGNs in this in-depth War Zone feature.

"By virtue of their concealment and endurance, the SSGN platform forces our adversaries to consider that they could be operating almost anywhere at any time,” then-Vice Admiral John Richardson, Commander of Naval Submarine Forces at the time, said in 2019. “The sensor suite on the boat allows the captain to gather information and intelligence in situ, passing that back to the commander and responding on the spot. When you combine all that with the tremendous combat capability the boat brings – land attack missiles, special forces, torpedoes – that's a lot of bets the enemy has to cover down on.”

Beyond anything else, these submarines' ability to act as invisible arsenal ships, with the ability to haul up to 154 Tomahawk missiles — roughly just over two-thirds of that number are usually carried by most estimates, is what makes them so feared. Each one of those missiles can travel 1,000 miles to its intended target, giving the SSGN a massive standoff attack capability.

In other words, draw a 1000 mile radius circle around an SSGN. Most of the potential targets inside that circle are put at risk when it is present. This means that it can hit targets in Crimea, Ukraine, and Russia with ease while cruising in the Eastern Mediterranean. And that little reminder is very likely what the Navy's little media push was all about.