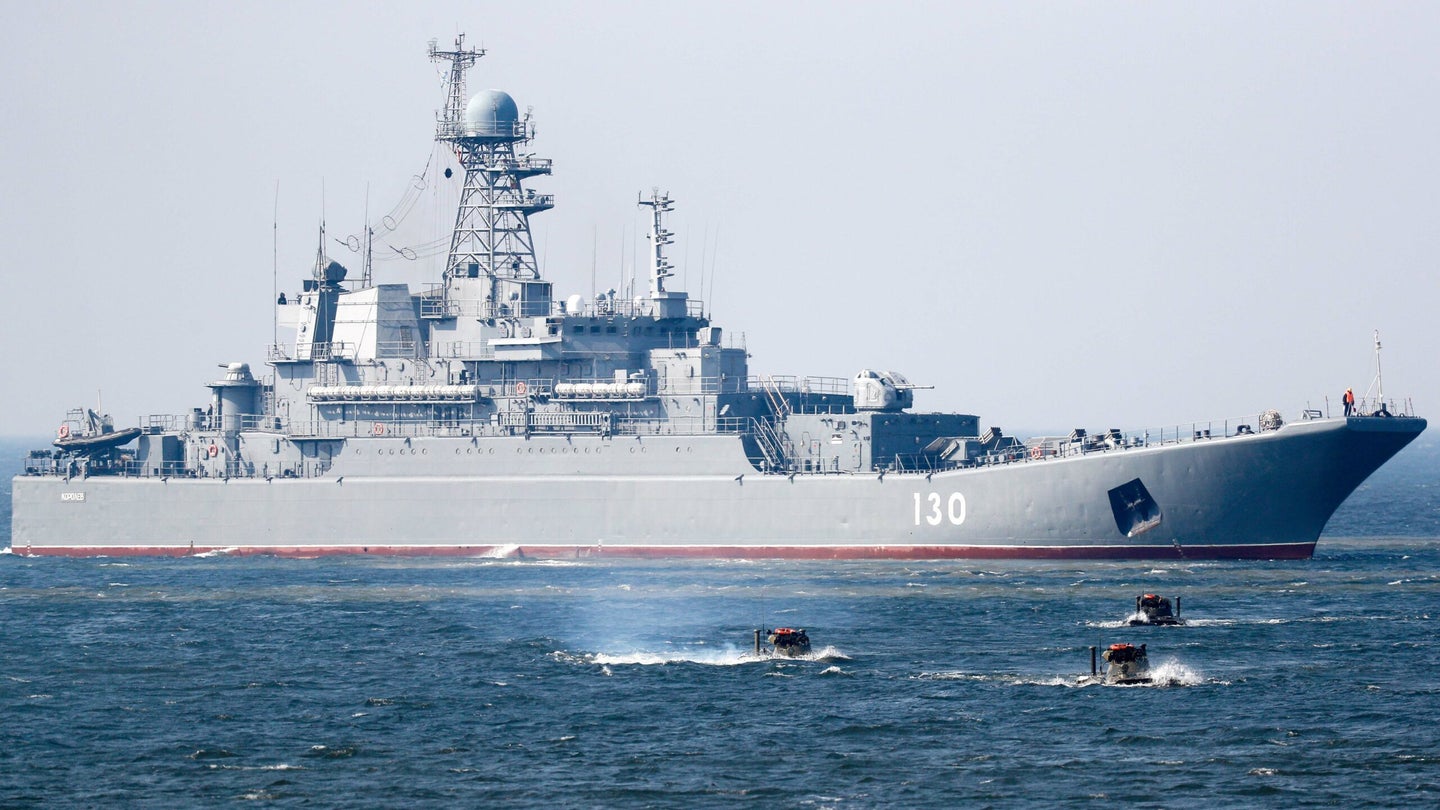 A group of Russian amphibious warfare vessels — three of which left the Baltic Sea region yesterday, preceded by another three the day before — have started to enter the English Channel. Some expect that their journey will eventually take them to the Black Sea to participate in an invasion of Ukraine by Russian forces.

You can find The War Zone's latest reporting on where these ships are headed here.

Multiple reports confirm that all six of the Russian Navy warships have begun their passage through the English Channel, after which they will enter the Atlantic Ocean. The vessels comprise the Project 775 Ropucha class amphibious warfare ships Olenegorskiy Gornyak and Georgiy Pobedonosets, as well as the Project 11711

Ivan Gren class landing ship Pyotr Morgunov, from the Northern Fleet, plus three other Ropuchas, the Korolev, Minsk, and Kaliningrad, from the Baltic Fleet.

The Netherlands-based Marineschepen website reported today that the Royal Netherlands Navy hydrographic survey vessel Zr.Ms. Luymes and its embarked NH90 helicopter escorted three of the Russian vessels through international waters in the North Sea, while they were en route to the Channel. “Supervision was then taken over by Belgian and British naval vessels,” the website added, with the Royal Navy apparently having sent the Type 45 destroyer HMS Dragon to shadow the Russian vessels. At least one French Navy warship is also understood to have been dispatched to monitor the progress of the Russian ships.

As of this evening, reports in the British media suggested that the first three Russian vessels, the Baltic Fleet Ropuchas, were already underway in the Channel, while the Northern Fleet contingent was following behind. At least one unsubstantiated account further suggested that the Northern Fleet vessels were at anchor, waiting for an improvement in the weather before making further progress.

The warships from the Northern Fleet had already been the cause of alarm during their time in the Baltic, which began on January 12. Their movements were judged “highly irregular” by the Swedish authorities, which led to hundreds of troops and armored vehicles being deployed to the island of Gotland.

With tensions continuing to surround Moscow’s build-up of troops and equipment around its borders with Ukraine, there has been much speculation that the movements of the six amphibious warfare vessels are connected to it.

While we have already discussed the capabilities of these warships in our previous coverage, it’s worth noting that they are both landing ship tank (LST) designs that can unload troops, vehicles, and other loads directly onto the beach via clamshell bow doors. The Soviet-era Ropucha class ships each displace close to 4,100 tons with a full load and can carry up to 10 main battle tanks, 340 troops, 550 tons of cargo, or a mixture of all three.

The more modern Ivan Gren class ships displace around 6,600 tons with a full load and can simultaneously carry up to 13 tanks and around 300 troops. They also feature a flight deck for up to two helicopters.

The eyes of NATO navies will be fixed on the Russian Navy amphibious warfare flotilla as it continues its voyage.

If they are to head south to the Black Sea, there are fears they could be used to support a potential new large-scale Russian military intervention in Ukraine. In this scenario, they would likely contribute to amphibious operations directed at areas of southern Ukraine, especially those along the Sea of Azov, just to the north of the Black Sea, which is under Russian control already.

We will continue to update our readers on the progress of these vessels, as well as the developing situation around Ukraine’s borders.