Precision-guided weapons are far more common armament options for drones like Mojave, but gun pods could be useful for armed overwatch missions.

General Atomics has released a new picture of its experimental Mojave unmanned aircraft armed with a variety of weapons, including a pair of Dillon Aero gun pods, each with a single fast-firing Minigun. This would appear to be at least one of the first known instances of a gun pod of any kind being integrated onto an armed drone in this general size and weight class. It's certainly an interesting armament option for an unmanned platform intended to support expeditionary and distributed operations, including special operations forces, from austere sites with semi-improved surfaces serving as runways.

The Mojave drone, only one of which has been built so far, that you can read more about here, is seen in the photograph fitted with six underwing pylons, in total, three under each wing. The gun pods are on the outboard stations, with the other four pylons each having a single dual-rail missile launcher. Those launchers appear to be loaded with a mix of AGM-114 Hellfire missiles, with their characteristic overall black paint jobs, and gray-painted weapons that may be newer AGM-179A Joint Air-to-Ground Missiles (JAGM).

Dillon Aero's gun pod is a self-contained system with its own internal power source for the electrically-driven Minigun inside, as well as a magazine holding 3,000 rounds of 7.62x61mm ammunition. In this podded configuration, the six-barrel Gatling-type machine gun is set to fire at a rate of 3,000 rounds per minute.

When GA-ASI first publicly unveiled the Mojave in December, the company put significant emphasis on the drone's ability to carry up to 16 Hellfire missiles, but also stressed that it could be armed with other weapons depending on a particular customer's requirements. The Mojave has been in development for around two and half years now as a private venture.

Hellfire is certainly the weapon most associated with GA-ASI's drones, especially the Predator, Reaper, and Gray Eagle product lines. The company has integrated or otherwise demonstrated a number of other munitions as options for its various drone designs, including the stealthy Avenger, over the years, too. These have included laser-guided Paveway and GPS/INS-guided Joint Direct Attack Munition (JDAM) bombs and AIM-9X Sidewinder air-to-air missiles. Precision-guided weapons, in general, are the most common armament for similarly sized drones in service around the world.

It's not clear where GA-ASI might be in flight testing Mojave with gun pods, or any other weapons, and whether any live-fire testing has been conducted. A test plan, dated September 2021, that the company filed with the U.S. Federal Aviation Administration (FAA) and that was subsequently posted online by an independent researcher, says that "flights may be conducted with the aircraft in a captive carry weapons configuration," but that "the captive carry 'weapons' will be inert mass simulators" and that "no launches or releases of weapons/stores will be conducted from the Mojave UA [unmanned aircraft] under Experimental Certification authority."

Regardless podded Miniguns could be a useful addition to the drone's armament mix in various scenarios. Guns, as compared to bombs or missiles, can provide a way to better focus fire on smaller targets or groups of targets, as well shift that fire more readily from one set of targets to the next. This could all be particularly valuable for engaging threats in dense urban areas or that otherwise might be dangerously close to friendly forces or innocent bystanders on the ground.

Even with only around a minute of total firing time, the gun pods might give a single drone the ability to engage more total targets during a single sortie, as well.

At the same time, the emphasis in the past on arming drones like Mojave with precision-guided munitions has been driven in no small part due to the vulnerability of those platforms to ground fire. Beyond that, the ability to engage threats while flying at higher altitudes offers a way for unmanned aircraft to try to avoid detection by personnel on the ground, which can be important when engaging time-sensitive or fleeting targets.

A gun pod, especially one loaded with a weapon like a Minigun chambered to fire the relatively small 7.62x51mm cartridge, imposes not-insignificant limitations on the general flight profile of the aircraft carrying it. To be as effective as possible, it must be employed at ranges that put that platform much closer to the target.

These issues might be less pronounced when employing Mojave, specifically, as an armed overwatch platform in support of low-footprint special operations missions in largely permissive environments. GA-ASI has made clear that this was a core mission set it had in mind for this unmanned aircraft when development started, though its overall vision has expanded significantly since then.

Beyond all this, it's not immediately clear how an operator would employ a gun pod-armed Mojave remotely, to begin with. Strafing targets on the ground, especially with a 7.62x51mm gun system, requires dynamic maneuvering close to the ground and a different level of situational awareness than most man-in-the-loop unmanned platforms, like those in GA-ASI's other product lines, are generally understood to be capable of. That has been a key reason for the focus on precision-guided munitions, which have a very different basic concept of employment and are usually employed at medium altitudes.

The inclusion of gun pods on Mojave would indicate that it possesses enhanced situational awareness for its operators, which would fit with the type's more independent concept of operations. It's also possible that new software has been developed to safely execute strafing runs on specified geolocated targets.

All told, the gun pod armament option certainly makes the drone look like an unmanned competitor to lightly armed helicopters, such as the AH-6 Little Birds that the U.S. Army's elite 160th Special Operations Aviation Regiment (SOAR) flies, or light fixed-wing attack aircraft like the ones that Air Force Special Operations Command (AFSOC) is evaluating as part of its Armed Overwatch program.

“We were hoping there’d be an unmanned part to the Armed Overwatch [program], we haven’t given up on that," David Alexander, GA-ASI's President, told The War Zone and other reporters during a call ahead of the official reveal of Mojave last year. “I think it’s a mistake not to include an unmanned aspect to that program."

The War Zone has reached out to GA-ASI for more information about the work that it has already done to add Dillon's gun pods as an armament option for Mojave, as well as how it sees those weapons being employed in an operational context. These weapons are certainly an interesting and unexpected addition to the arsenal of the company's newest drone.

GA-ASI has now gotten back to us with more information about the gun pods and the rest of the loadout seen on the Mojave drone in the picture that the company put out today.

"Gun pods have been around for a long time, and we’ve been building UAS for three decades, so certainly the idea of putting gun pods on our aircraft have been discussed in various situations over the years," C. Mark Brinkley, GA-ASI's Senior Director of Marketing & Strategic Communications, told The War Zone in a statement. "Laser-guided munitions have always been the preferred strike option, for various reasons, and remain so today. That doesn’t mean we should rule out the idea of a gun pod for future UAS [unmanned aircraft systems] missions, including Armed Overwatch-type missions."

"The point of the photo is really to inspire discussion. Mojave offers some pretty revolutionary flight capabilities, in terms of short-field and unimproved surface advantages," he continued. "Specific weapon configurations would be driven by customer requirements. We’re not specifically testing gun pods, but we certainly could."

"Multi-Domain Operations and Armed Overwatch employment offer several scenarios where gun pods are a complementary armament option, alongside larger, more kinetic solutions," Brinkley added in response to a specific question about how a gun pod-armed Mojave might be employed. "We take precision and limiting collateral effects seriously, as do our customers, so the question of when, where, or how gun pods could be best employed remains to be answered."

"We haven’t conducted any live-fire tests, and currently have no near-term plans to do so," he said. "But we do foresee the Mojave as a weapons truck for future conflicts in austere environments. Could that mean gun pods? Maybe. The future remains unwritten." 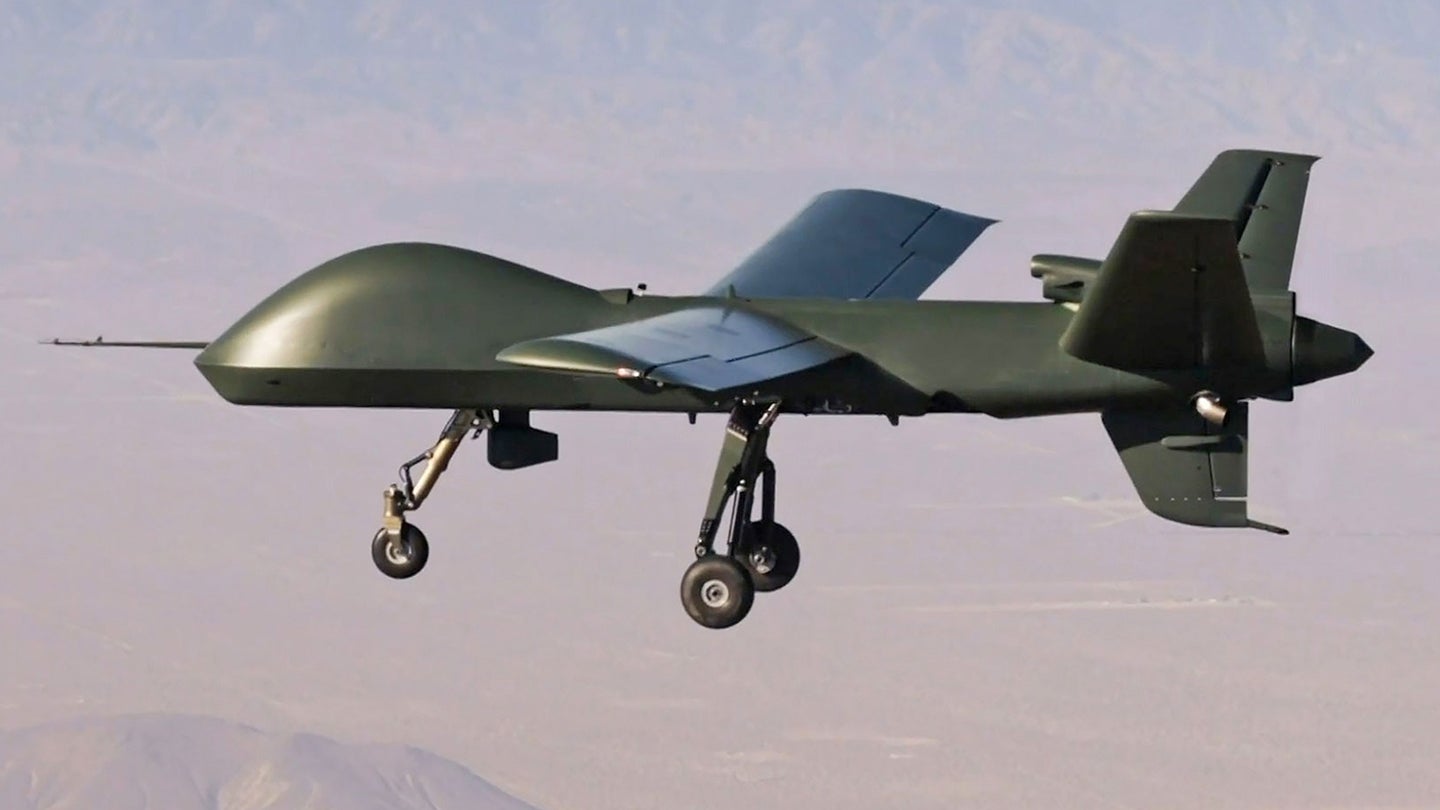 The new Mojave drone is like an intriguing mix of OV-10 Bronco and MQ-9 Reaper. 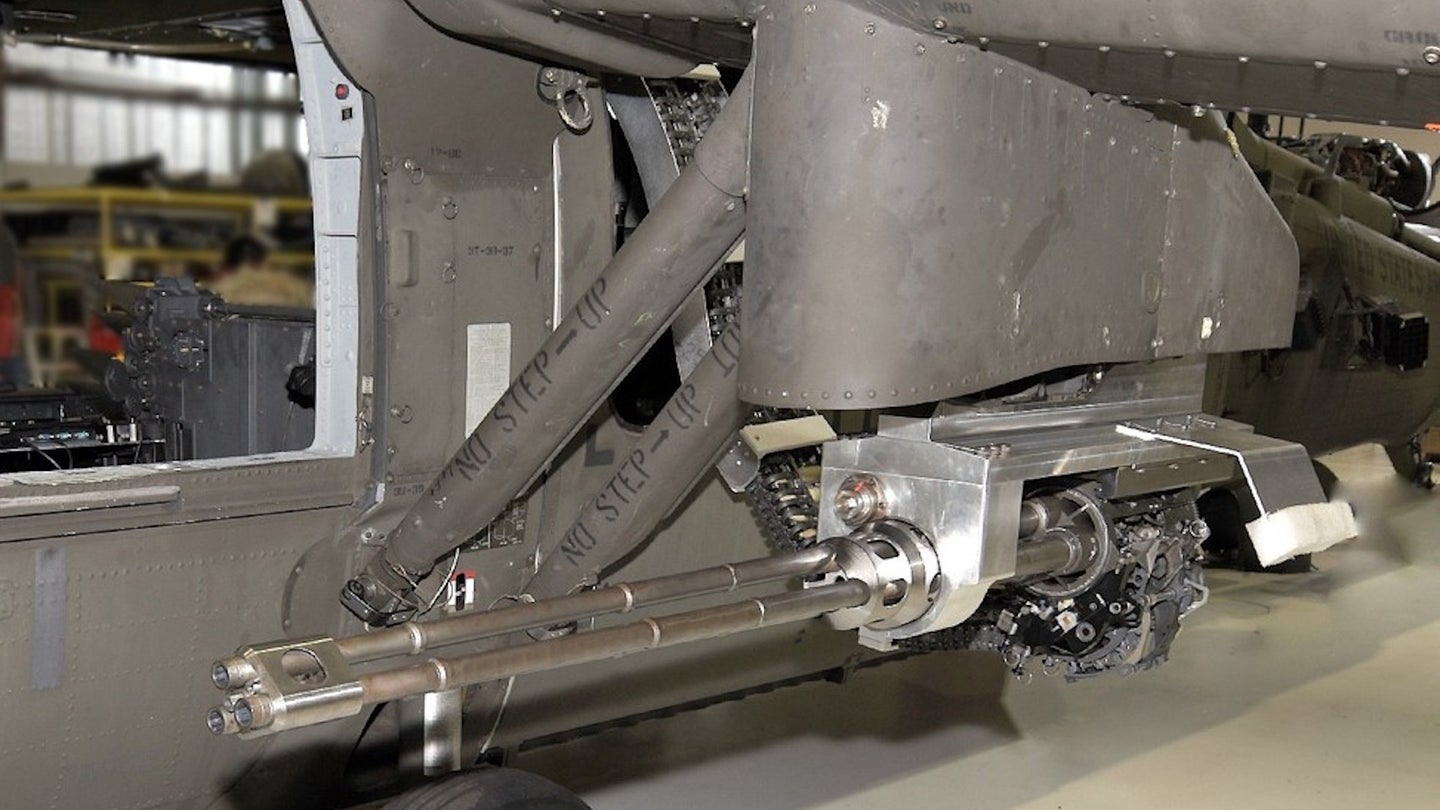 The XM915 cannon is being tested on a UH-60 Black Hawk, but is under development for the Army’s Future Armed Reconnaissance Aircraft. 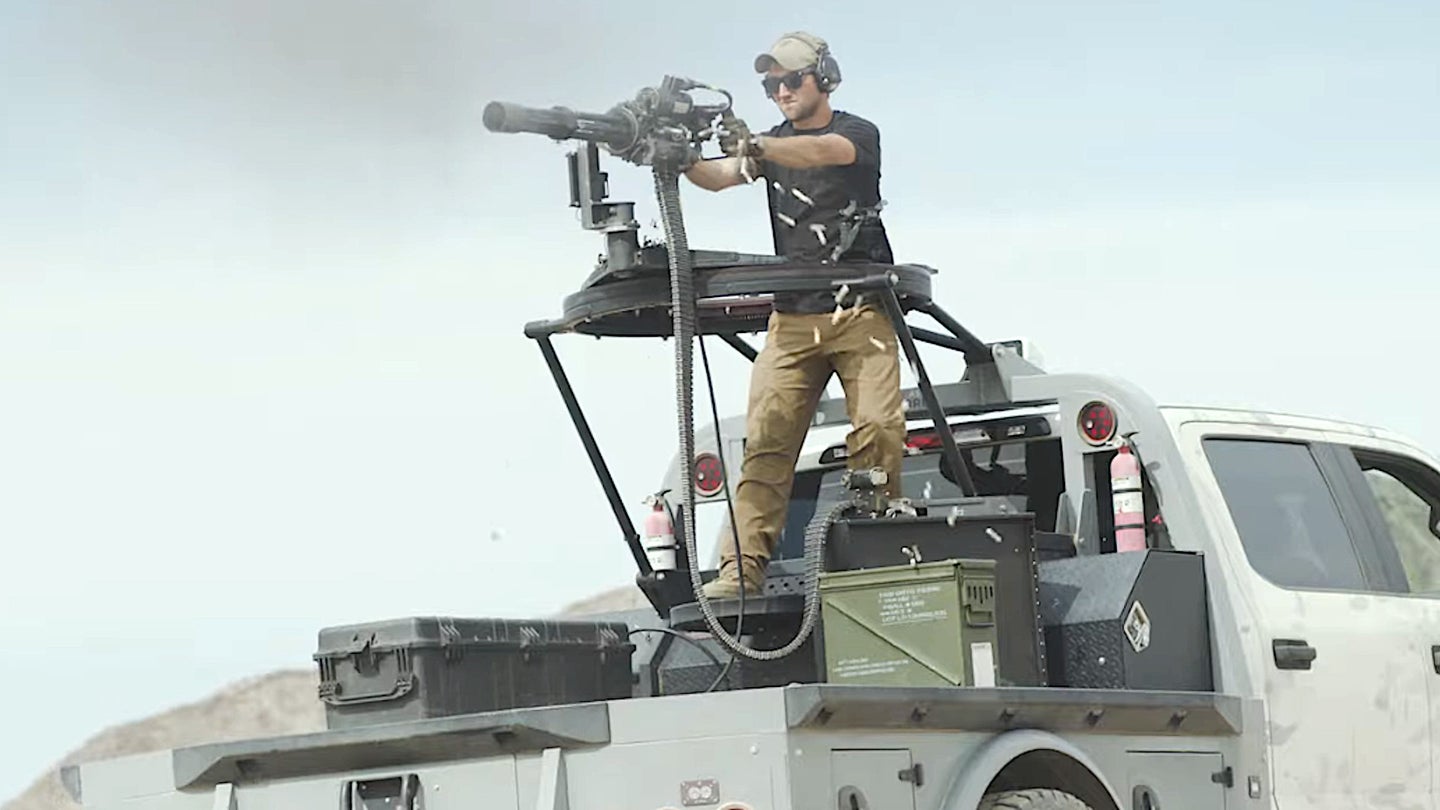 Ammunition maker True Velocity says it can give many guns that fire 7.62x51mm ammunition far better performance with just the swap of a barrel.