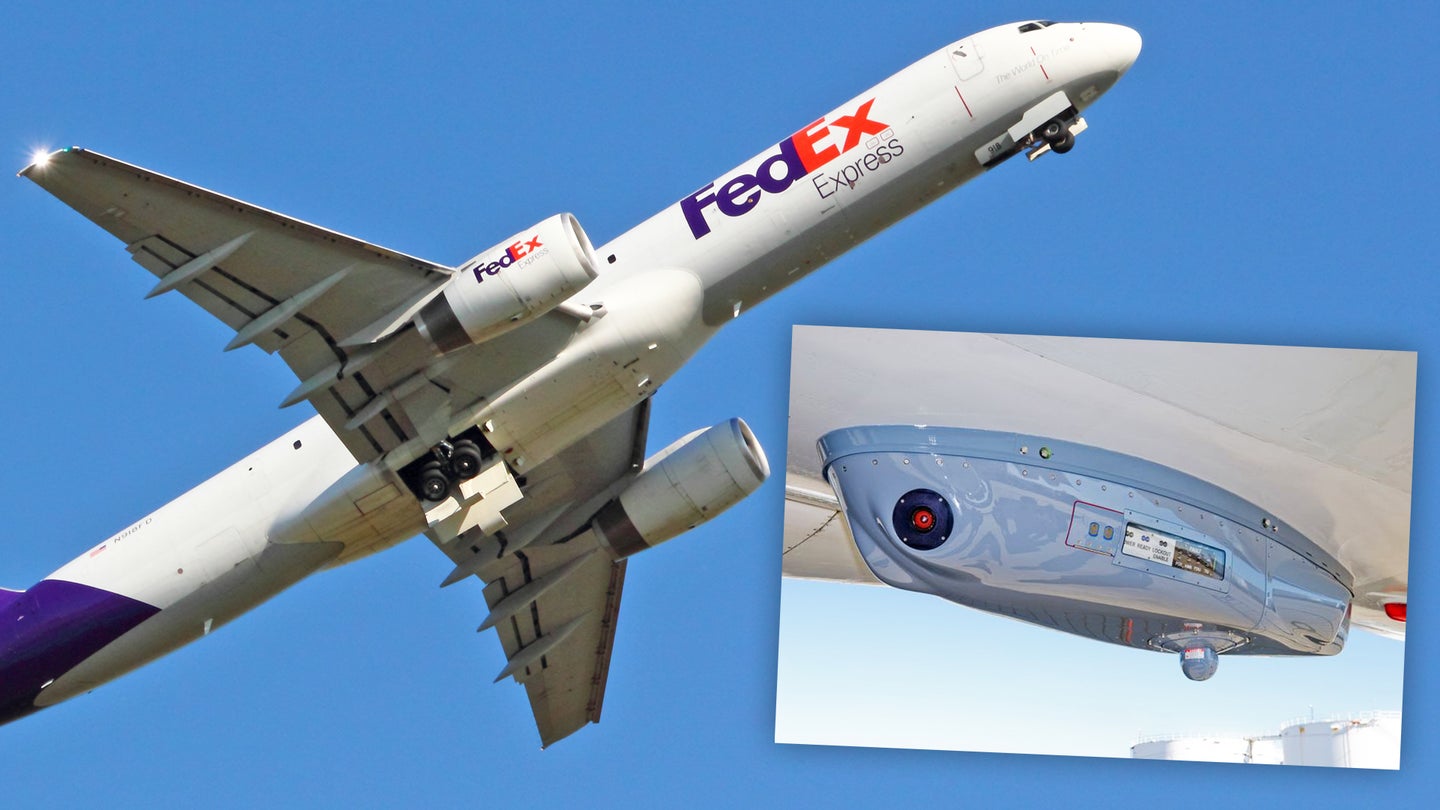 The FAA has filed a proposal with the U.S. Department of Transportation that seeks special conditions that would allow FedEx aircraft to carry infrared countermeasures to defend against heat-seeking missiles. While this isn’t the first time that infrared countermeasures have been proposed for commercial aircraft, or even FedEx aircraft, the filing suggests the need for missile defenses even in the commercial airline sector still remains.

The FAA’s proposal states that “in recent years, in several incidents abroad, civilian aircraft were fired upon by man-portable air defense systems (MANPADS).” To counter this threat, the FAA seeks special conditions for FedEx to install a system “that emits infrared laser energy outside the aircraft as a countermeasure against heat-seeking missiles.” Currently, the FAA notes, airworthiness regulations for commercial aircraft lack safety standards for these systems.

The language in the filing suggests FedEx is seeking to install a Directional Infrared Countermeasure system, or DIRCM. These self-defense systems are now widespread among military transport aircraft and helicopters. Even fighters are now receiving the technology. They work by flashing modulated laser beams of infrared (IR) light at incoming missiles to blind their seekers or at the very least draw the incoming missiles away from the aircraft they are targeting.

The particular aircraft in the filing, the Airbus A321-200, is a long-range version of the A321 and is primarily used as a commercial passenger aircraft. FedEx does not yet operate the A321-200, although the aircraft is being eyed as a contender for future cargo operations by several major freight companies.

In 2004, Israeli airline El Al became the only commercial carrier to equip its aircraft with missile countermeasure systems, although that particular system was flare-based (expendable decoy), not a DIRCM system. Fears of the flares starting fires on the ground, as well as the volatile nature of handling them, prompted the airliner to later shift to the laser-based C-MUSIC system. C-MUSIC is also more effective against advanced threats in many scenarios.

Since 1970, the International Civil Aviation Organization has reported at least 42 civilian aircraft have been attacked with MANPADS systems. An Israeli airliner flying out of Mombasa, Kenya carrying 260 passengers was struck by shrapnel from a suspected MANPADS missile as it took off, but was able to safely land in Tel Aviv with minimal damage. In 2003, a DHL Cargo plane flying from Iraq to Bahrain was forced to make a harrowing emergency landing after a MANPADS struck its left wing.

Despite a severely damaged left wing and a total loss of hydraulic control, the three-man crew was able to return to Baghdad and land the aircraft, controlling it primarily by varying engine thrust.

FedEx began testing anti-missile countermeasures aboard its aircraft as far back as 2006 when it installed Northrop Grumman’s pod-based Guardian DIRCM system, based on the AN/AAQ-24, aboard a McDonnell Douglas MD-10. Northrop Grumman collaborated with FedEx on the design of the FedEx-specific system in order to fit it aboard a canoe-shaped ventral pod that could be attached or removed in ten minutes and added as little drag as possible. It includes a laser turret/pointer and missile approach sensors that provide 360-degree warning and cueing for the laser turret.

That installation was part of the Department of Homeland Security’s Counter-MANPADS Program which sought to develop and demonstrate anti-missile systems for commercial aircraft. During the program, the Department of Homeland Security (DHS) tested two different directional infrared countermeasure systems, the Northrop Grumman Guardian and the BAE Systems JetEye, against 29 MANPADS systems.

Over 16,000 flight hours of testing went into the DHS assessment, which found that both systems “met effectiveness requirements” and could defeat multiple missiles under many attack scenarios. DHS’s full assessment from 2010, which can be found online, is heavily redacted. The study concluded that airlines could integrate these DIRCM systems “at a considerable cost and with an impact to airline operations,” with a price tag of over $30 billion dollars to equip 3,600 aircraft. DHS also noted that export control relief would be needed before they could be installed and used internationally.

The same DHS study from 2019 also assessed the feasibility of using high-altitude long-endurance drones circling airports at 65,000 feet to provide standoff protection against MANPADS. Project CHLOE, as it was known, found that these drones could “detect, track, and lase” MANPADS, but they would not meet their performance requirements.

Some analysts were quick to note that given the volume of air traffic at the average international airport, it would take dozens of UAVs circling a single airport in order to provide adequate defense against MANPADS attacks. It's also unclear how unmanned aerial vehicles (UAVs) at 65,000 feet could provide defense against MANPADS fired far below on the ground. This was also 20 years ago, when the wide application of advanced UAVs was still in its earlier stages.

There were even plans to expand the project to other platforms, such as high-altitude airships.

Despite extensive testing, Project CHLOE never got off the ground. DHS evaluated other air defense systems as part of a separate “Emerging Counter-MANPADS Technologies” program, although DHS’s 2010 section of this report is highly redacted and it is unknown what these technologies may have been.

DIRCM was still somewhat new at the time the DHS’s study was conducted, and these infrared systems have since come down significantly in weight, size, and cost. Today, modular systems like Large Aircraft Infrared Countermeasure (LAIRCM) are flying on hundreds of military aircraft.

The threat of shoulder-launched missiles isn’t as widespread as bird strikes or interference from errant off-the-shelf drones, but it remains hard to quantify due to the proliferation of MANPAD systems. According to a 2019 RAND Corporation study, Russia remains the most prolific exporter of MANPADS, with over 10,000 units sold between 2010 and 2018 alone. Those systems largely went to countries such as Venezuela, Iraq, Syria, and Libya, countries whose “combination of instability and possession of thousands of MANPADS suggest that they likely have the highest risk for stockpile leakage,” according to RAND. These systems have fallen into the hands of rebel groups and have been used effectively against numerous military aircraft. It’s impossible to know how many of these systems may have ended up in the hands of terrorist groups or criminal organizations, as well.

The United States has also contributed to the proliferation of MANPADS to some degree. Throughout the 1980s, the Central Intelligence Agency supplied Afghan rebels fighting the Soviet Union with Stinger missiles. American authorities launched an expensive and complex effort to buy back any missiles that remained from those transfers, but many remain unaccounted for. The CIA annex in Benghazi, Libya was tasked with recovering as many MANPADS looted from the arsenals of Muammar Qaddafi as possible when the deadly attack on the nearby U.S. consulate took place in 2012.

Other countries produce and export MANPAD systems, with countries like France and China trailing Russia and the United States in RAND’s 2019 report. Many of the MANPADS that are loose around the world were manufactured decades ago and the functionality of these old stocks is debatable.

Despite their proliferation, U.S. Air Force veteran Michael Pietrucha, who served as an irregular warfare operations officer, argued in a piece for War on the Rocks that MANPADS are "difficult to employ and relatively easy to defeat,” adding that “In the tens of thousands of sorties flown in the last two decades by U.S. and NATO aircraft in the Balkans, Iraq and Afghanistan, only four fixed-wing combat aircraft have been hit (and two downed) by MANPADS.” At the same time, MANPADS performance in the early stages of the conflict in Eastern Ukraine was more effective and deadly.

As the FAA’s filing suggests, though, these systems still pose at least some degree of threat to commercial air traffic. Given that FedEx is applying for special conditions to fit a DIRCM system aboard an aircraft they aren’t yet flying, it could be that the freight company is eyeing the system for use only in specific cases or routes. This would be a beneficial capability serving high-risk areas. With such little to go on other than the filing, however, it’s impossible to know the extent to which FedEx intends to use the system.

For now, the FAA filing is another reminder of the dangers posed by air defense systems falling into the wrong hands. It will be interesting to see what comes of the FAA’s request and if other commercial airlines or freight companies follow FedEx’s lead.