New details about the FAA's halt on flights across the western U.S. clearly point to North Korea's hypersonic missile test as being the culprit. 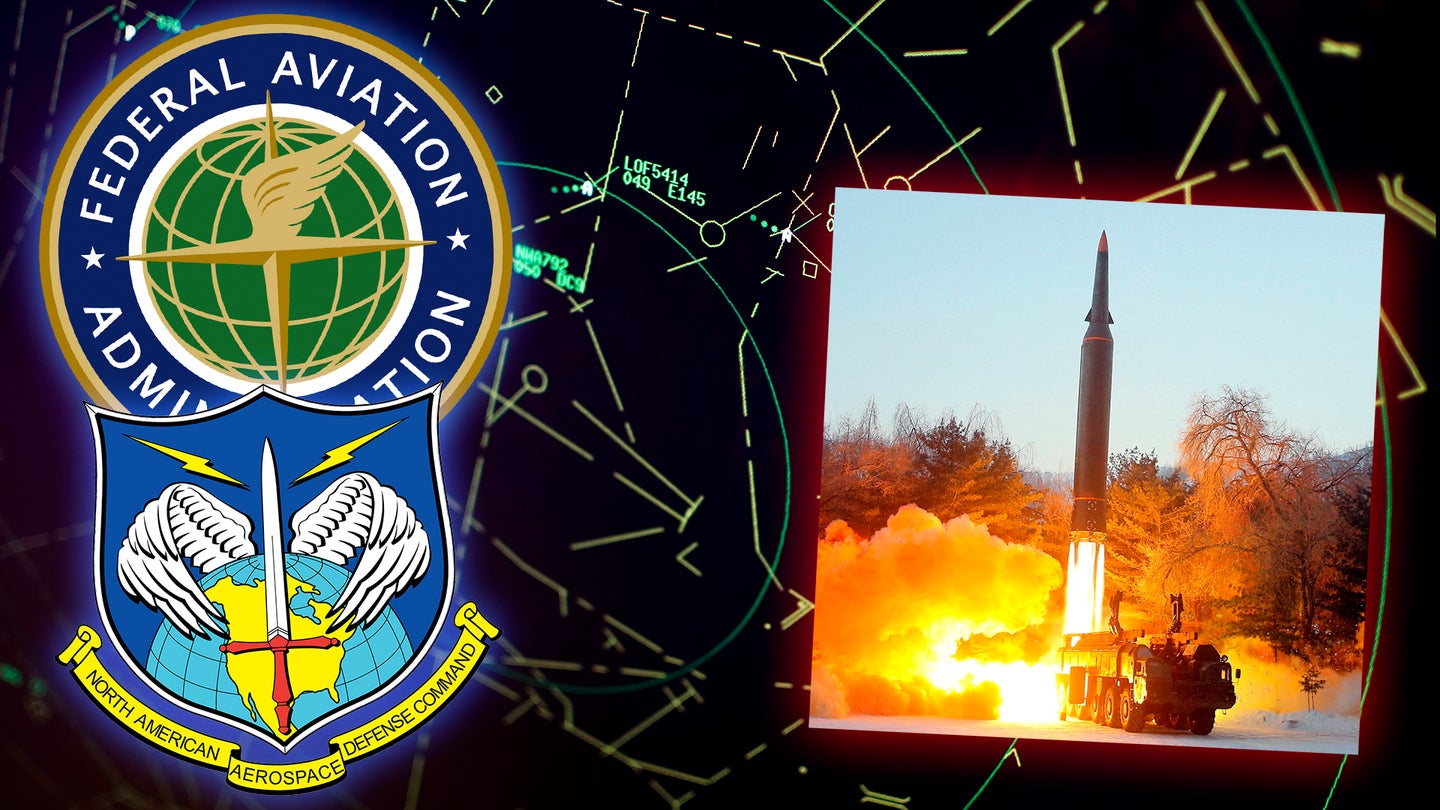 Two days after the Federal Aviation Administration issued a highly peculiar ground-stop order to aircraft operating across the western United States and Hawaii, and after the release of a remarkably murky official statement from the agency, we were no closer to understanding exactly what prompted the order than we were initially. While U.S. Strategic Command would not comment on the incident and NORAD denied it had any hand in it, information that has come to the attention of The War Zone from sources with knowledge of the events clearly paints a different picture—one that points directly to the North Korean hypersonic weapon test that occurred at nearly the exact same time as the culprit.

While it has been up for debate if the ground stop order was some sort of blatant mistake, hack, or misunderstanding on the FAA's part unrelated to the North Korean test of a hypersonic maneuvering reentry vehicle (MaRV) that occurred just before 2:30 PM PST on January 10th, 2022, that doesn't seem to be the case. We have heard multiple pilot reports and radio communications that mention a national security issue being the impetus for the ground stop, which included some airplanes in the air being told to land immediately. The FAA's official statement, which was released 20 hours after the order was issued, didn't help quench curiosity surrounding the incident, stating ambiguously:

Now, The War Zone has become aware of messaging to air traffic control personnel at the time of the order that stated NORAD advised of a missile-launched aerial maneuvering vehicle from North Korea impacting airspace from the Aleutian Islands to Los Angeles. A ground stop was subsequently issued for air traffic control centers ZAN (Anchorage), ZSE (Seattle), ZOA (Oakland), and ZLA (Los Angeles) —and possibly others — no later than 2:32 PM PST. In fact, ZLA may have received the order a few minutes earlier.

Just 16 minutes later, NORAD advised that the ballistic missile's aerial maneuvering vehicle payload had splashed down in waters far to the east of Japan and that normal operation could proceed, effectively ending the ground stop. In reality, the vehicle actually splashed down in the waters to the west of Japan.

What's also of interest is that minutes before the initial ground stop order and the details surrounding it being communicated to some air traffic controllers, NORAD notified the FAA to have Los Angeles Air Traffic Control Center clear the airspace around the northern stretch of Vandenberg Space Force Base, which is located about 170 miles northwest of Los Angeles. We assume this was meant to ready the area for a potential launch of a Ground-Based Midcourse Defense (GMD) interceptor capable of knocking down ICBMs. While the vast majority of GMDs are based in Alaska, a handful are based at Vandenberg for limited operational contingency and test duties.

So, it seems clear that the FAA did indeed think — or at least had enough information to err on the side of caution — that a major threat was posed by the North Korean launch and acted to mitigate potential danger to aircraft and possibly to keep them from interfering with a possible intercept attempt. What we don't know is exactly what the intelligence they were given was and what processes were used to execute the actions that were put into play. NORAD saying it had no part in the ground stop could still be true if all it did was provide preliminary intelligence according to established procedures and the FAA interpreted it in their own way to order the unprecedented action.

The unfortunate aspect of all this is based on the information now at hand, it seems like the system worked as it should, not the opposite. There is very little time to make critical decisions when dealing with potentially inbound ballistic missile threats. The fast and flat trajectory of the North Korean MaRV test may have degraded the initial accuracy of the U.S. military's missile launch identification and flight characteristics classification capabilities, resulting in ambiguity or even outright inaccuracy when it came to predicting the missile's flight profile. If this was indeed the case, the FAA seems to have acted quickly on the intelligence it had.

While this assessment could change as more information comes to light, it doesn't necessarily paint the FAA in poor light, or the military, for that matter, who was likely doing the best it had with the information available. Major investments are being made in the U.S. military's ability to classify, track, and engage hypersonic weapons that should drastically improve early warning and the quality of rapid intelligence evaluations as to the danger a launched hypersonic vehicle poses.

Of course, the FAA could clear all this up easily by simply providing more information as to what happened and why. At the same time, there may be some resistance to doing so because it highlights just how serious of a threat North Korea's missile capabilities now pose to the U.S. homeland.

At the time of publishing, The War Zone still has not received a response from the FAA regarding our initial inquiry about this event. We have just talked with NORAD again and they are working to get more information that they can share with us.

Regardless, this whole ordeal gave us a unique glimpse into what would happen if the U.S. came under attack by some sort of long-range ballistic missile capability. It seems that the first indicator we may get that such an event was occurring would be the FAA ordering a ground stop to aircraft located over a broad area and the clearing of critical airspace so that interceptors can be safely employed.