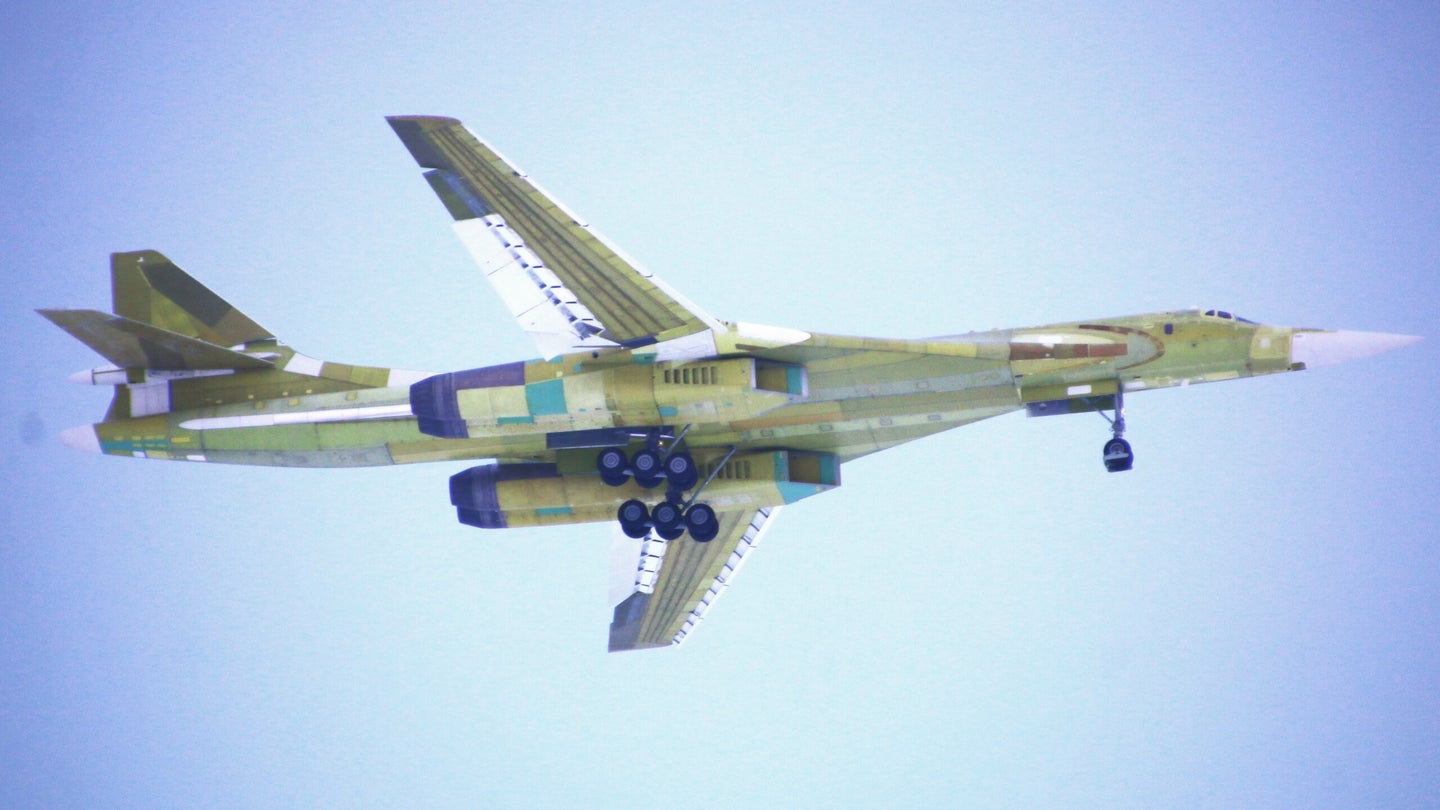 Russia has flown a first example of the Tu-160M Blackjack strategic bomber from the new production batch. Full-scale manufacture of the variable-geometry bomber and missile carrier, which was developed toward the end of the Cold War, had ceased by 1995. After that, only a handful more were completed using existing components, before Moscow decided in 2015 to relaunch production in the upgraded Tu-160M form, primarily as an interim measure due to delays in the PAK DA new-generation bomber program.

The first newly manufactured Tu-160M took to the air today, Jan. 12, at the factory airfield of the Kazan Aviation Plant, which is owned by Tupolev, the aircraft’s design bureau. Both those entities now come under the umbrella of the United Aircraft Corporation, UAC, part of the state-owned Rostec entity.

According to a press release from UAC, the new Tu-160M was flown to an altitude of over 1,960 feet and was in the air for around 30 minutes. “The crew of test pilots of Tupolev PJSC performed maneuvers to check the stability and controllability of the aircraft in the air,” the statement added.

The story of the Blackjack’s production relaunch began more than a decade ago, when Russia began work on the secretive PAK DA, expected to be a subsonic, stealthy, flying-wing design, to replace the current manned bomber fleet. This program has been dogged by delays and limited funding, and in 2015 the decision was made to resume series production of the Tu-160 and postpone the PAK DA.

The decision to restart the Blackjack production line was announced by the Russian Minister of Defense, Sergei Shoygu, in April 2015, during a visit to the Kazan plant.

A formal order for 10 new Tu-160Ms was then signed at the Kazan plant in January 2018, in the presence of President Vladimir Putin. At the time, the unit cost of each new bomber was put at around $270 million, and the first example was expected to be ready in 2021. Russian Aerospace Forces have declared a requirement for at least 50 new-build Tu-160M aircraft, although so far no further orders have been placed. 17 Tu-160s make up the current Blackjack fleet.

Since the original Blackjack is long out of full-scale production, the effort to restart the line at Kazan has not been straightforward.

In the meantime, however, the existing Tu-160 has been subject to an upgrade program, emerging as the Tu-160M. At one point, the new-build aircraft were to be designated Tu-160M2, to differentiate them from the modernized aircraft. In the event, the commonality between the older, upgraded jets and the new batch means they are both (somewhat confusingly) designated Tu-160M.

With that in mind, the new Tu-160M that took to the air today should actually be very similar to the modernized Tu-160M, the first example of which — named Igor Sikorsky — took to the air in February 2020.

The Tu-160M configuration introduces a completely new mission system and avionics. The original radar is replaced by the new NV-70M, while the crew is now provided with a cockpit equipped with digital displays, in place of the previous analog instruments. The flight control system, navigation equipment (which combines an inertial navigation system, astronavigation, Doppler navigation radar, satellite navigation receiver, and computer) and communication suite are also new. For self-protection, the Tu-160M introduces an all-new defensive suite, and there is also a new reconnaissance system, although we do not know exactly what that includes. We would imagine it is referring to a new electronic support measures (ESM) suite.

A major hurdle in returning the Blackjack to production has been the requirement for new engines, with production of the original Kuznetsov NK-32 turbofan, the most powerful combat aircraft engine on earth, long having ceased. In its place, the company has developed the modernized NK-32-02, which also incorporates improved internal aerodynamics and more efficient cooling. This results in reduced fuel consumption, which Tupolev claims can increase the Tu-160M’s range by 13 percent. Flight test of an upgraded Tu-160M fitted with the new engines began in November 2020.

In addition to these major issues, the production restart has also required Tupolev to digitize the design documentation of the aircraft and resume advanced vacuum-welding techniques for specific titanium components. The effort has also required the establishment of a new cooperative relationship between different industrial enterprises to ensure the required metallurgy, mechanical engineering, and instrument-making techniques are available.

“Tu-160 is one of the largest and most high-tech projects in the aviation industry,” UAC General Director Yuri Slyusar said in a statement. “The implementation of this program required not only the renovation of production facilities but also the creation of a fundamentally new digital environment for working on the project. A number of aircraft design bureaus participated in the preparation of digital documentation for the project. The fundamental importance of today's event is that the new machine has been completely rebuilt from scratch. The systems and equipment in the new machine have been updated and modernized by 80 percent.”

“We have restored the full production cycle of the Tu-160, but already in the M modification, using modernized engines, modernized aircraft control systems, navigation systems, and weapons control systems,” explained Denis Manturov, Minister of Industry and Trade of the Russian Federation. “The modernization of the Kazan Aviation Plant played an important role in restoring the production of unique aircraft: the equipment of the shops, the flight test base was updated, the world's largest installation for electron beam welding and vacuum annealing of titanium was put into operation. Today we see significant prospects for the Tu-160 platform: further development will make it possible to use it for new types of weapons, including promising ones.”

It's unclear what new weapons Manturov was referring to, but there are several possibilities. Among the munitions known to be in development for Russia’s heavy bombers is the Kh-SD, expected to be a subsonic missile that uses the same guidance system as the Kh-101 cruise missile now in service, but with a smaller airframe incorporating low-observable features. The result would provide the Tu-160M (and other aircraft) with a weapon in the same class as the U.S. AGM-158 Joint Air-to-Surface Standoff Missile, or JASSM.

The Kh-BD is planned as the next-generation long-range cruise missile for the Tu-160M and other bombers and is expected to be based on the existing Kh-101 and Kh-102, ensuring the possibility of internal carriage in the Tu-160M. Reportedly, the Kh-BD should offer 50 percent more range than the basic Kh-101, which would enable it to hit targets at around 3,700 miles.

Then there is the Kh-MTs, which is being developed under the GZUR hypersonic weapons program. This effort is being pursued by the Tactical Missiles Corporation and the Raduga design bureau and is reported to be based around a ramjet-powered missile that can attain a speed of Mach 6, with a range of over 900 miles when flying in a high-altitude profile.

Although a handover date for the first new-build Tu-160M has not been published, the Russian Aerospace Forces will no doubt be looking forward to receiving their first genuine new-build bomber equipment since the mid-1990s. The Tu-160’s service history with Russia has been turbulent, to say the least, with most of the fleet being left on Ukrainian soil after the collapse of the Soviet Union.

Eventually, eight Tu-160s were purchased by Russia from Ukraine, while limited production yielded another six examples completed at Kazan between 1992 and 1995. After that, using incomplete aircraft that had been left at the factory, three additional Tu-160s were finished and rolled out at Kazan in 1999, 2006, and 2017.

Home-based at Engels, the Blackjack fleet now serves with the Russian Aerospace Forces, and the introduction of conventionally armed cruise missiles permitted the type to make its combat debut during Moscow’s campaign in Syria, in 2015.

The current fleet of 17 Blackjacks is a small but capable force, but with an increasing demand for both long-range ‘patrol’ flights as well as potential deployments to new and renovated airbases in the Arctic, the arrival of new Tu-160Ms will be a significant boost in terms of capability and serviceability.

Official plans now call for the new Tu-160Ms to remain in service until the 2050s or even the 2060s, by which point the ultimate fate of the PAK DA should be clear.

Update, 2.15 PM PST: The first official video of the maiden flight of the initial new-build Tu-160M has been released. The video has been published by the Russian Ministry of Defense’s official television station, TV Zvezda, and shows the swing-wing bomber beginning its flight-test program at a snowy Kazan Aviation Plant.

TV Zvezda also noted that the commander of the Long-Range Aviation branch, Sergei Kobylash, announced earlier this month that the first two new-build Tu-160M aircraft would be delivered to the service in 2022.