Upgraded F-16Vs are the most capable fighters available to Taiwan, whose fleet is increasingly in demand to respond to Chinese air activity.

Taiwan has lost one of its recently upgraded F-16V fighter jets, the aircraft crashing into the sea. The incident comes just weeks after the type was declared fully operational with the Republic of China Air Force, or ROCAF, an event that you can read about in detail here.

According to the Rescue Command Center, helicopters and ships are now involved in the effort to try and locate the pilot, while training on the type has reportedly been suspended, although the full extent of the grounding order is currently unclear. The video below, released by the Coast Guard, shows part of their response to the accident:

The F-16, a single-seater, reportedly crashed at 3:26 PM local time today, coming down in the sea off Dongshi, around 14.5 miles west of Chiayi Air Base, in the west of Taiwan. The jet apparently had departed the base around 30 minutes earlier, for a routine training sortie over the Shuixi coastal range. This reportedly involved firing the aircraft's onboard 20mm M61 Vulcan cannon to strafe training targets on the ground.

The aircraft in question, with the serial number 6650 and assigned to Chiayi’s 21st Tactical Fighter Group, was originally delivered to the ROCAF as an F-16A, sometime in the late 1990s. It had since been upgraded to F-16V standard, as part of a wide-ranging modernization that’s underway for the Taiwanese F-16 fleet. The same jet is also seen at the top of this article, photographed during a drill at Chiayi on January 5 this year.

The ROCAF is the first F-16 operator anywhere in the world to field combat-capable F-16Vs. In Taiwanese service, the updated jets are also referred to as the F-16A/B Block 20 MLU.

The F-16V is considered the most advanced fighter in the ROCAF inventory, and the declaration of full operational capability (FOC) with the service at Chiayi last November came with significant fanfare, including a visit to the resident 4th Tactical Fighter Wing by Taiwanese President Tsai Ing Wen.

Ironically, that event had been postponed partly as a result of a number of earlier accidents involving ROCAF aircraft. This, combined with the COVID pandemic, led to delays in marking FOC. Previously, Chiayi had marked the initial operational capability milestone with an announcement in March 2021, after which active training began on the jets.

As of last November, it was reported that 64 of Taiwan’s F-16s had been upgraded. We have discussed the scope of the work in the past, suffice to say it represents a considerable advance for the 1980s-era F-16A/B fleet and includes the Northrop Grumman AN/APG-83 Scalable Agile Beam Radar (SABR), with an active electronically scanned array (AESA), providing much-increased detection and engagement ranges, as well as enhancements in reliability.

Original plans called for the ROCAF to receive 144 F-16Vs, all produced via conversion of existing F-16A/B jets, but this number was later reduced to 141 through attrition to the existing Viper fleet. Today’s accident will further reduce that total to 140 jets.

It has, however, been a very protracted journey getting to this point. Taiwan’s plans to upgrade its F-16s date back over a decade, after the Obama administration turned down requests for new-build F-16s. The U.S. Congress was first notified of a planned Foreign Military Sale for an F-16 upgrade back in September 2011, then valued at an estimated $5.3 billion.

After Lockheed Martin won a $1.85-billion contract for the upgrade work in October 2012, the project was dealt a blow when the U.S. Air Force abandoned its parallel Combat Avionics Programmed Extension Suite (CAPES) program to upgrade its own F-16s, forcing Taiwan to take on additional test-related costs.

After the first two F-16Vs were upgraded by Lockheed Martin in the United States, where a first example flew in October 2015, further work has been handed in Taiwan by the Aerospace Industry Development Center (AIDC). Upgrade work is now scheduled to be completed by the end of 2023.

The importance of the F-16V to the ROCAF has only been emphasized by recent operations by the Chinese People’s Liberation Army (PLA) in airspace around Taiwan as well as by rapid developments in China’s own fighter fleets. An idea of the scale of the task presented to the ROCAF can be seen in the increase in PLA activity in the southwestern corner of Taiwan’s Air Defense Identification Zone, or ADIZ, last year. According to the Financial Times, since September 2020, China has sent military aircraft into the ADIZ for an average of 20 days each month. In one spike over just four days last October, no fewer than 149 PLA aircraft entered the ADIZ in different waves.

The upgraded Viper is poised to bring a host of new weapons to the fleet. Expected to be added to the F-16V are the AGM-88 High-Speed Anti-Radiation (HARM) missile for defense suppression, the AGM-154 Joint Stand-Off Weapon (JSOW), and the Standoff Land Attack Missile Expanded Response (SLAM-ER). The SLAM-ER adds an especially powerful long-range precision-strike capability, with a range of 170 miles.

Aside from the F-16s, the ROCAF has a frontline fighter fleet that includes 55 French-supplied Mirage 2000-5s and 129 locally built F-CK-1 Indigenous Defense Fighters (IDF).

In the future, the ROCAF is set to gain more F-16s, in the shape of 66 new-build Block 70 F-16C/D jets. The previous Trump administration approved the sale of these jets, which have a similar general configuration to the F-16V, as part of efforts to expand the U.S. government’s relationship with Taiwan. The package is worth an estimated $8 billion.

Recent reports suggest that there are frustrations among U.S. officials over Taiwan’s demand for more sophisticated defense hardware, instead of cheaper equipment that would be easier to acquire and could arguably be more effective in at least buying time in the face of Chinese military intervention. The F-16V, however, presents a compromise here, with advanced equipment being added to existing airframes.

The loss of an aircraft so soon after the declaration of FOC is a blow to the ROCAF, although for now hopes rest on the safe recovery of the pilot. The incident also continues an unhappy period of attrition for the service, marking the sixth aircraft loss since the beginning of 2020. Previous incidents involved an F-16A in late 2020, while pair of F-5E fighters crashed into the sea last year after an apparent mid-air collision.

While there is nothing to suggest that these accidents are in any way connected, or reflect underlying issues within the ROCAF, their timing is unfortunate, to say the least, as the service finds itself stretched to respond to the high tempo of PLA aircraft activity over the Taiwan Strait.

We will continue to update this report as more details become available.

Update, 12:15 PM PST: As the search for the missing pilot of ROCAF F-16V serial 6650 continues, some further details about the mishap have emerged. The pilot at the controls of the jet was Capt. Chen Yi, who had joined the ROCAF in March 2020 and had almost 322 hours under his belt, more than 60 of which were in F-16s.

The ROCAF say they lost contact with the jet at 3:26 PM local time — just three minutes before it reportedly impacted the sea. There was no mayday call or sign of a parachute and the jet is said to have banked sharply before impacting the Taiwan Strait at high speed. These details were confirmed by Maj. Gen. Liu Hui-chien, an air force inspector general, at a news conference today. “As it’s now edging into night, the search and rescue situation is quite challenging,” Maj. Gen. Liu said. He also confirmed that rough seas were making rescue efforts harder.

A series of photos showing these efforts have also been released by the Taiwanese Central News Agency (CNA) and are posted below, including flares illuminating the skies:

Maj. Gen. Liu also revealed that serial 6650 was involved in a previous incident last September when the landing gear was mistakenly retracted, although it only sustained minor damage on that occasion.

A report in the Wall Street Journal confirms that, as of this evening, all ROCAF F-16s have been grounded as a safety precaution. 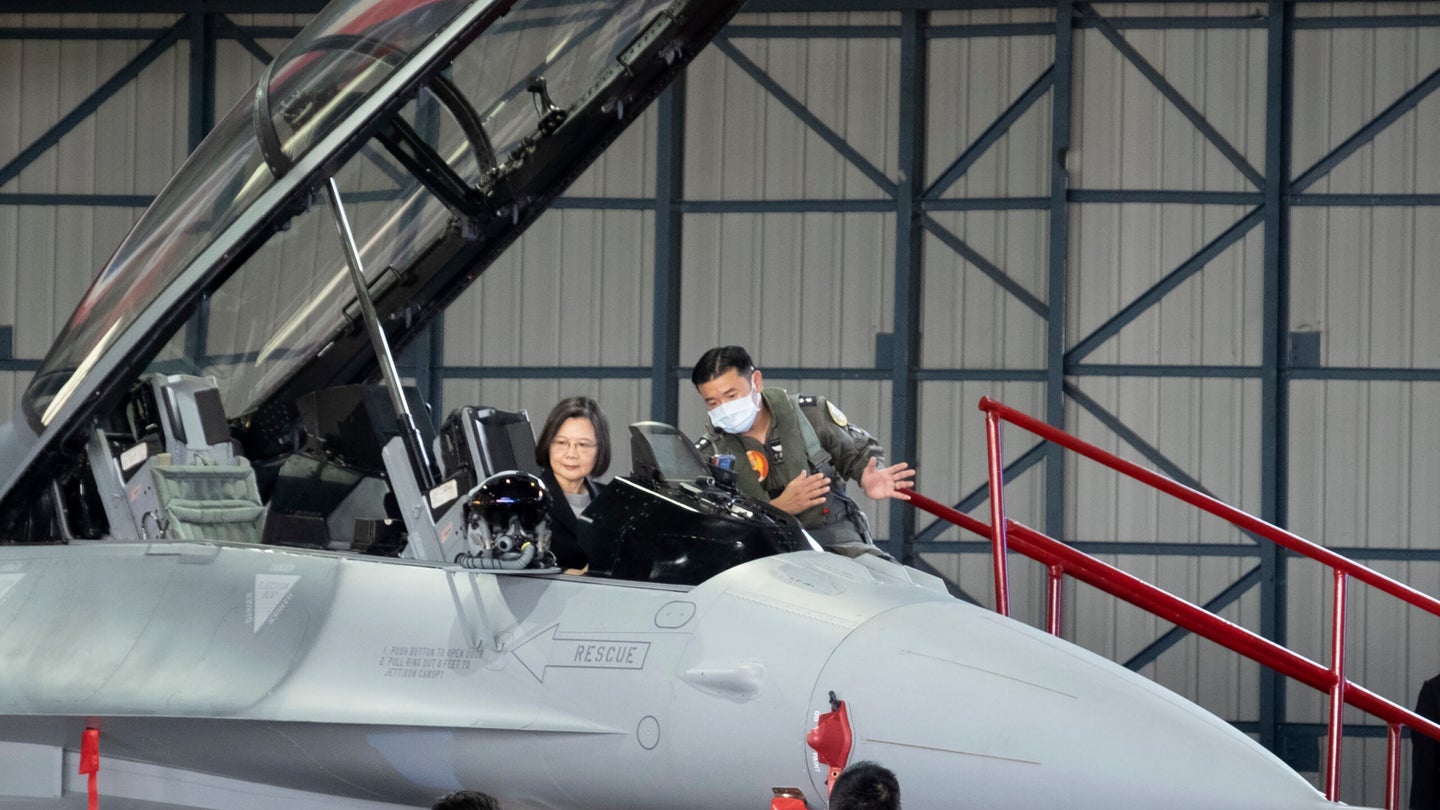 As tensions with China rumble on, the Taiwanese president formally inducted the first wing of modernized F-16V aircraft. 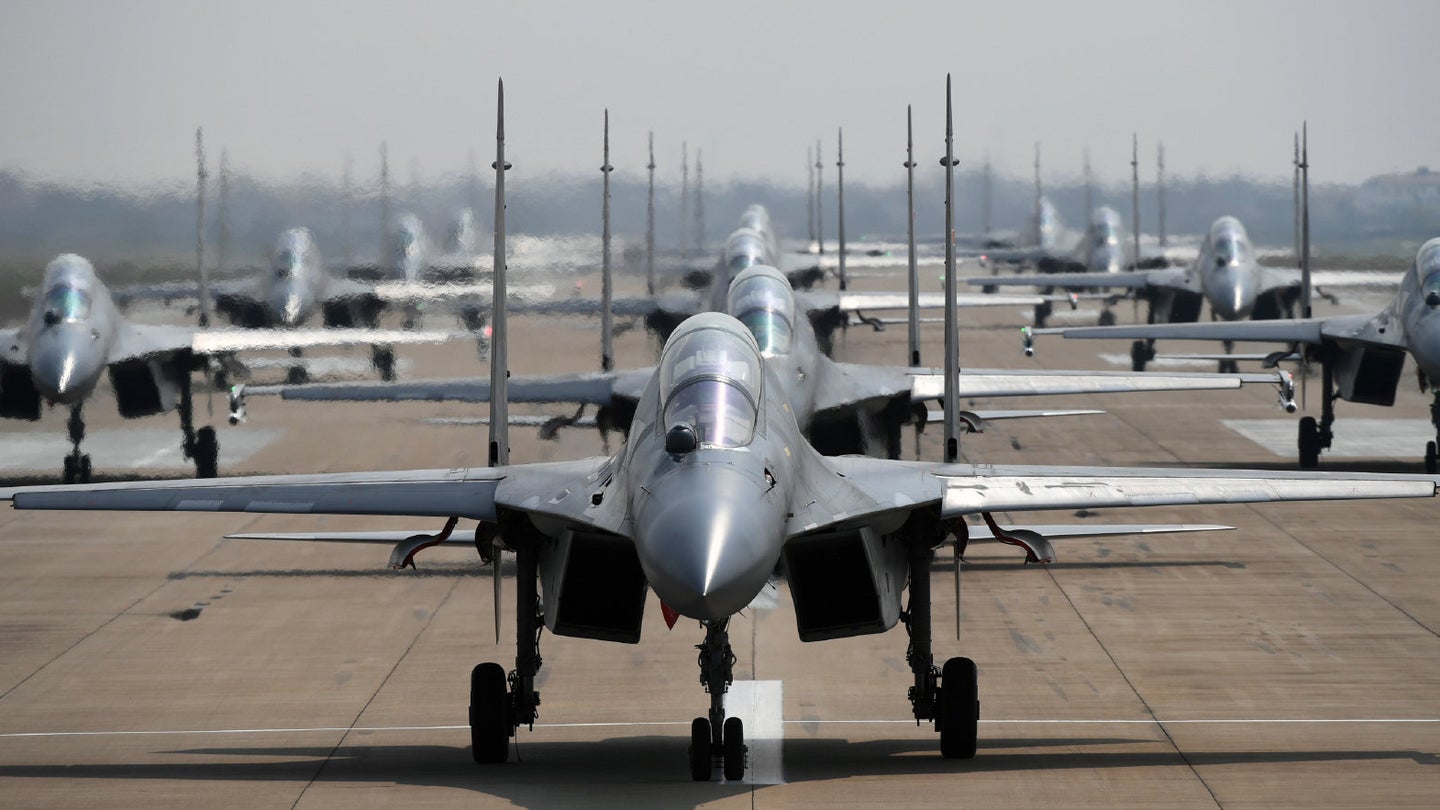 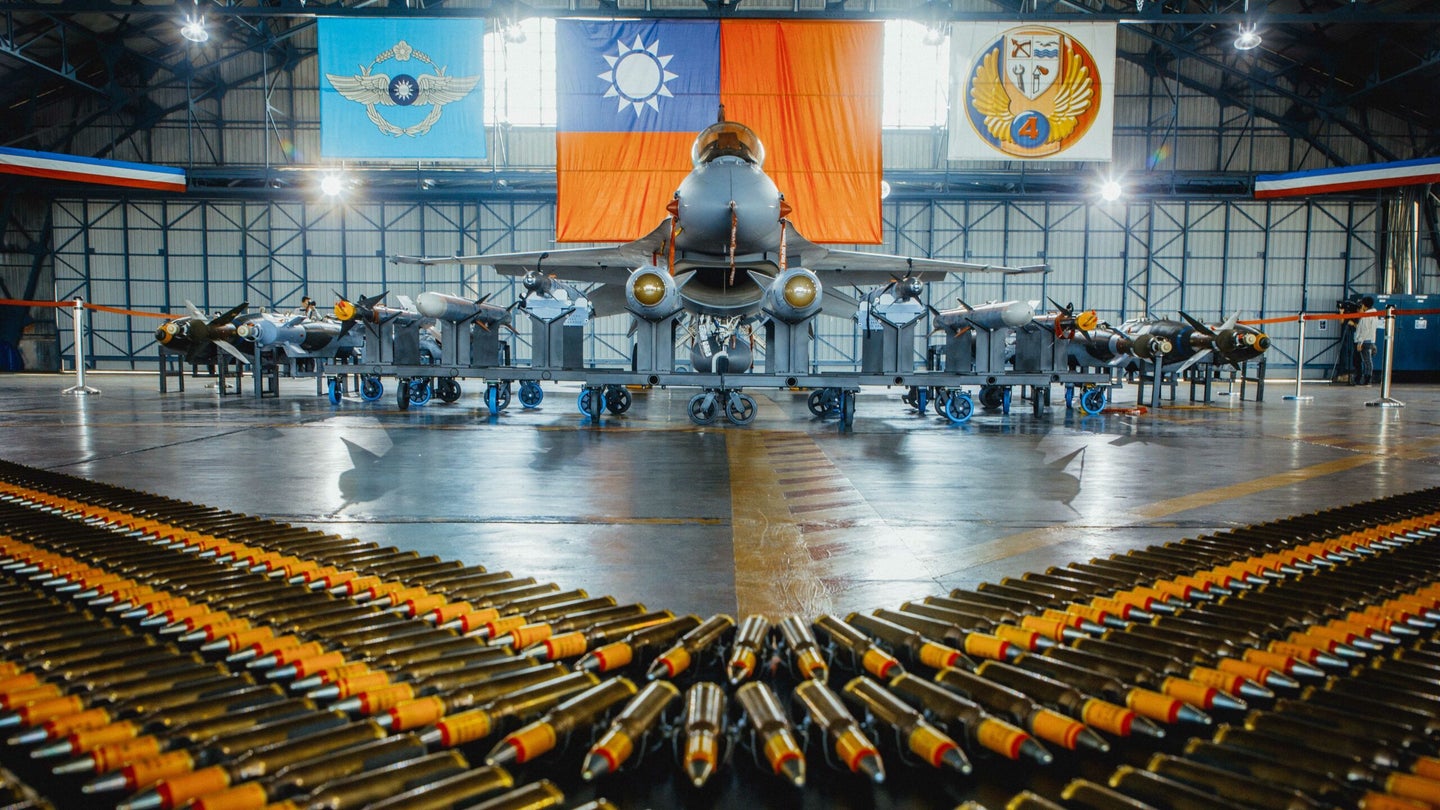 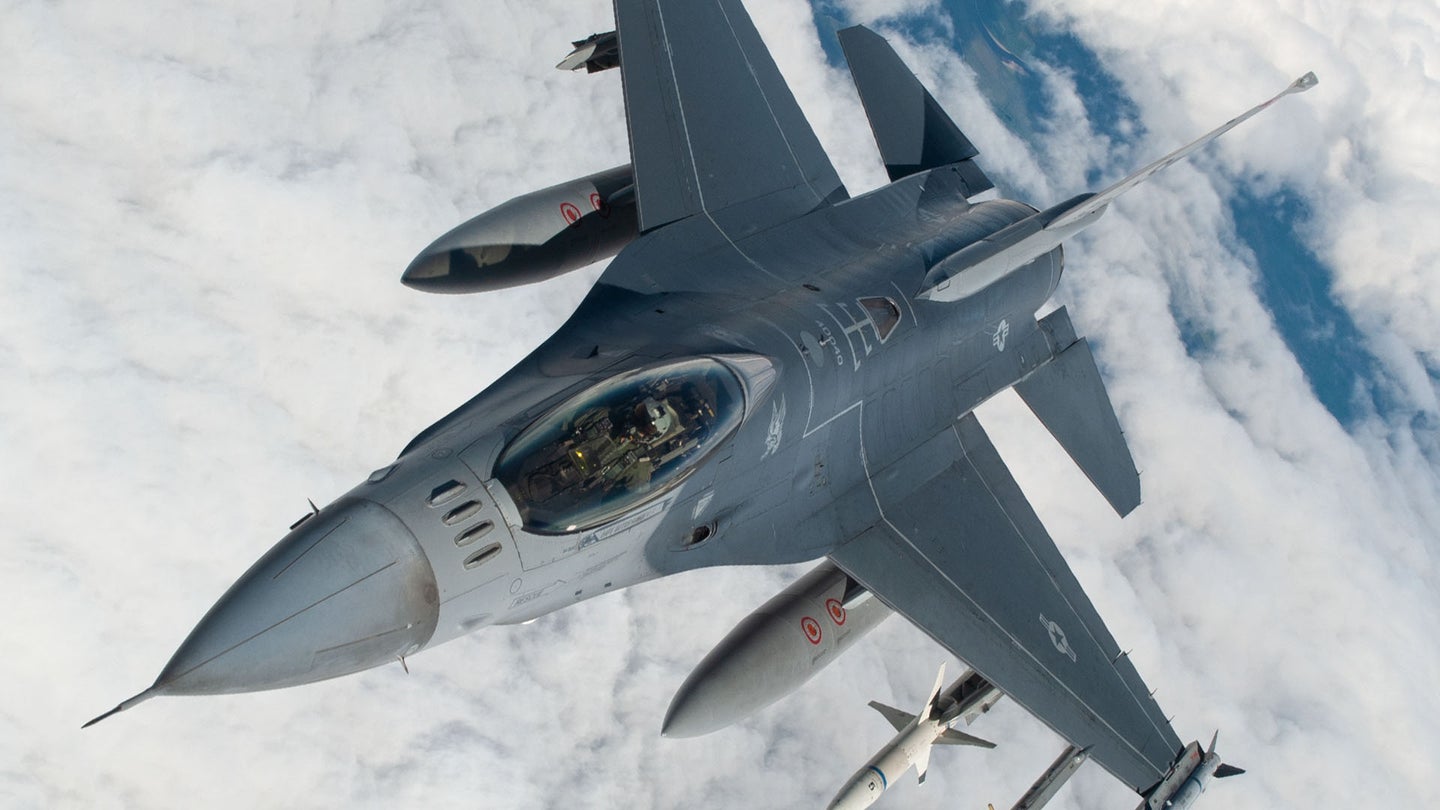 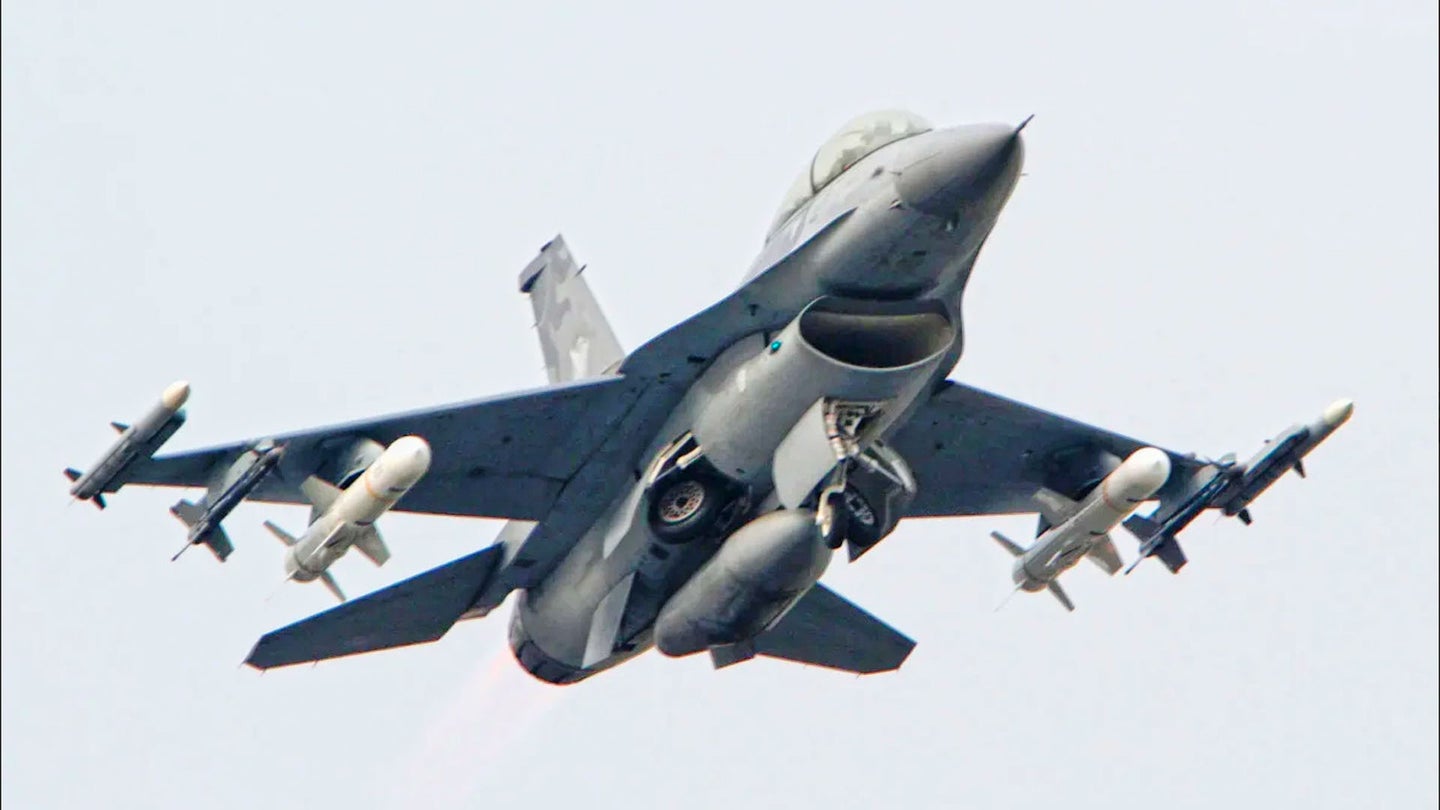