The new system is capable of making pinpoint electronic attacks but it’s so big that it requires major alterations to a destroyer’s superstructure. 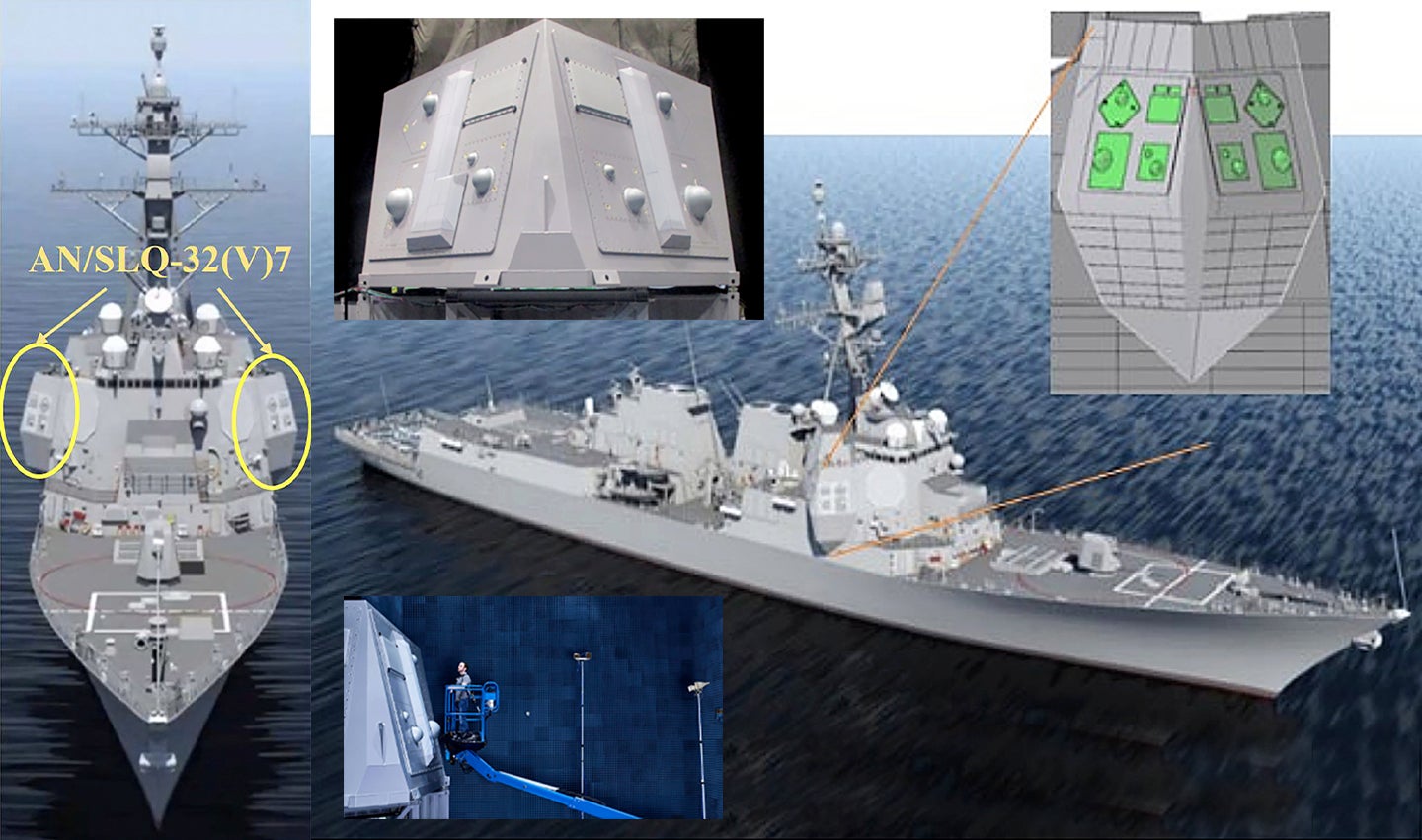 Northrup Grumman is pushing ahead with plans to develop a more 'lightweight' version of the AN/SLQ-32(V)7 Surface Electronic Warfare Improvement Program Block III, or SEWIP Block III, that it is developing for the U.S. Navy. This shrunken-down version of the system could give smaller vessels a cutting-edge suite of electronic warfare (EW) capabilities — one that can not only provide advanced passive detection of radiofrequency threats but also make precise and potent electronic attacks on multiple targets simultaneously, and possibly more.

The types of capabilities offered by SEWIP Block III Lite could be a game-changer for responding to threats from anti-ship missiles, unmanned aerial vehicles, marauding aircraft, other ships, and more. It could also provide a secondary multi-mode radar and high-bandwidth communications capability. You can read all about this advanced electronic warfare suite and its planned capabilities in this past piece of ours featuring an interview with Mike Meaney, Northrop Grumman's Vice President in charge of the SEWIP Block III program.

Meaney spoke to C4ISRNET this week and revealed that the company is developing compact versions of the EW system. Meaney says that the firm is “looking at opportunities to scale down the system for smaller ship classes — frigates and smaller.” Such a system, Meaney claims, could offer Naval vessels an “unlimited volley of bullets” to counter anti-ship missiles and other threats.

“On smaller ship sizes, we know it’s of great interest to the Navy to put this soft-kill capability with unlimited bullets on almost every ship that they have because [of] the incredible protection electronic warfare offers you,” Meaney said. “We know that they’re interested in doing that, so we’re off on our own trying to develop what we think would make sense to go do in anticipation of the Navy having a requirement to do a scaled-down version of it.”

Meany says that the SEWIP Block III integrates machine learning and artificial intelligence tools that can analyze new or unfamiliar enemy waveforms in order to counter them 'on the fly,' while an open software and hardware architecture allows Northrop Grumman to update the system with new capabilities as new threats emerge.

The earlier SWEIP Block II SLQ-32(V)6 is capable of geolocating, identifying, and classifying radio frequency emitters. This comprehensive suite of advanced passive detection capabilities can provide a high level of situational awareness about potential threats around Naval assets as well as aid in broader electronic signals intelligence efforts. SEWIP Block III, which heavily leverages active electronically scanned array (AESA) technology, expands on these capabilities by adding in the ability to conduct highly-targeted non-kinetic attacks on incoming threats or even offensively, as well as the potential for other ancillary capabilities.

Advanced SEWIP systems have also been demonstrated to be able to be networked together with SEWIP systems on other platforms, as well as space-based nodes and airborne sensors. This is something the Navy has been pushing for with its Project Overmatch and Distributed Marine Operations (DMO) concepts, as well as less well-known, but potentially revolutionary initiatives.

The SEWIP Block III and other 'soft kill' systems stand to increasingly be essential assets for defending ships against attacks from a diverse range of threats because they can respond almost instantaneously from every direction, in multiple ways, and with unlimited magazine depth. Along with the variety of directed energy weapons on the horizon, these types of advanced electronic defenses can provide a newly evolved invisible layer of protection around surface combatants that can keep pace with the rapidly shifting threat landscape at sea.

The Navy and Northrop Grumman have not yet entered into a contract on the SEWIP Block III "Lite," but Meaney added that the contractor is anticipating an order for four more full-sized Block III systems in 2022. This would bring the total number of SEWIP Block III under contract to nine. One system is reportedly already undergoing installation aboard an unnamed Arleigh Burke-class destroyer on the West Coast.

The sheer size of the SEWIP Block III system makes it impossible to adapt for smaller ships in its current form, with Engineering and Manufacturing Development (EMD) models measuring over twenty-two feet tall.

Other configurations of older-block SEWIP systems include much smaller, simplified, modular enclosures such as the unit below, seen on USS Gridley (DDG-101).

The installation of SEWIP Block III on Arleigh Burke class destroyers is quite elaborate and includes four of these big arrays, each holding four AESA arrays themselves, to provide spherical coverage around the ship. They will be placed in built-out enclosures below the Arleigh Burke class's bridge wings where there are platforms and attachment points for existing electronic warfare systems today. This invasive and large of configuration is simply not an option for smaller vessels.

When it comes to warships that are smaller than the Arleigh Burkes but larger than patrol craft that could be candidates for SEWIP Block III Lite, the Navy currently has its troubled fleet of Littoral Combat Ships and the service’s future Constellation class frigates, previously known as FFG(X). While there are roughly two dozen LCSs delivered, the first of the new frigates aren't expected to be delivered until 2026, while some estimates put that date closer to 2029.

The Navy had discussed plans to place SEWIP Block II aboard the FFG(X), as early as 2019, with talk of a potential 'SEWIP Block III Lite' as a future option if sufficient space and power aboard the vessels could be set aside. A designation for this Block III Lite, SLQ-32C(V)7, was listed in a 2019 presentation given to Surface Navy Association (SNA).

Aside from the possible use aboard the future FFG(X), a smaller version of the SEWIP Block III could be a very attractive upgrade for the Navy’s Freedom-class and Independence-class littoral combat ships. Since at least 2014, the Navy has had plans to deploy earlier SEWIP configurations aboard both classes that make up the problem-ridden LCS program, but they currently remain limited to different electronic support measure suites and expendable decoys. Giving them SEWIP Block III Lite, with its active electronic attack capabilities, would allow them to operate in higher-threat areas, which would be highly useful considering the changing geopolitical and national security landscape. It would also give them another highly-valued weapon for offensive attacks, as well. Overall, these ships are notoriously under-gunned for their size and lack a robust anti-air capability, in particular. As such, a downsized SEWIP Block III could be extremely valuable and provide more relevance for LCS fleet, as a whole, going forward.

The Navy's other surface combatants could also potentially benefit from a more easily installable SEWIP Block III capability, from its amphibious assault ships to its upcoming Light Amphibious Warship.

There is also a whole slew of other allied naval arms that use SEWIP today that would be excellent candidates for some version of this system. Networking more allied vessels together with this new technology will only increase the survival and lethality of the total allied force during combined operations, as well.

All told, the Navy’s continued efforts to develop both defensive and offensive electronic warfare capabilities show just how important EW is for protecting naval assets from threats that are proliferating around the globe, especially those posed by peer-state competitors. A 'lite' version of SEWIP Block III that could be successfully deployed aboard smaller vessels would go a long way towards helping the Navy dramatically bolster some of its ships' defenses while also giving them a new weapon to bring to bear on the enemy.

SEWIP Block III is much more than just a naval electronic warfare system. Northrop Grumman’s Mike Meaney breaks down its real potential for us.