The carrier variant of the stealthy Joint Strike Fighter, the F-35C, has deployed onboard an aircraft carrier for the first time in U.S. Marine Corps hands. While the Marines also operate the short takeoff and vertical landing (STOVL) F-35B version, the service is procuring the C-model to ensure it can continue with the long-established TACAIR Integration agreement under which it provides squadrons to go aboard the Navy’s big-deck carriers. The addition of the carrier-going F-35C to the Marine Corps inventory also signals a significant boost to the service’s ability to confront high-end adversaries, especially in the Asia Pacific theater.

The Marine Corps announced yesterday that Marine Fighter Attack Squadron 314 (VMFA-314), the “Black Knights,” had departed San Diego Bay aboard the USS Abraham Lincoln (CVN-72). In the process, VMFA-314 becomes the first Marine Corps squadron to deploy the F-35C on a flattop and only the second frontline F-35C squadron of any kind to go to sea. Part of the 3rd Marine Aircraft Wing (3rd MAW), the Black Knights are home-based at Marine Corps Air Station Miramar, California. Embarked on USS Abraham Lincoln, the squadron is now fully integrated as part of the Navy’s Carrier Air Wing Nine (CVW-9).

“The Black Knights’ deployment of the F-35C Lightning II aboard USS Abraham Lincoln is the newest chapter in the Marine Corps’ long history of naval integration,” said Maj. Gen. Bradford J. Gering, commanding general of the 3rd MAW. “The upcoming deployment represents years of hard work and innovation by the Marines and sailors of VMFA-314, MAG-11, and 3rd MAW. It also reinforces our commitment to fielding the most lethal and ready Navy-Marine Corps force as we project warfighting capabilities throughout the Indo-Pacific region, or globally wherever our nation calls.”

“Our ability to operate the F-35C in the Pacific greatly increases the Marine Corps’ naval expeditionary force capabilities by providing us the capacity to employ the most advanced electronic warfare capabilities on any aircraft today in support of fleet operations,” added Lt. Col. Brendan M. Walsh, the VMFA-314 commanding officer. “In addition, having this asset available greatly increases the Marine Corps’ ability to provide security to our allied nations and preserve a free and open Indo-Pacific.”

VMFA-314 received its first F-35C in January 2020, the arrival of the new jets allowing the unit to retire its last F/A-18A/C ‘Legacy’ Hornets. Naval Air Systems Command then certified the Black Knights as safe for flight with the F-35C the following March, allowing the squadron to begin flight operations at Miramar.

Since then, the Black Knights have conducted an extensive series of exercises and workups with the USS Abraham Lincoln and CVW-9.

In one high-profile exercise, Summer Fury 21, the 3rd MAW flew F-35Cs more than a thousand miles up the West Coast from Miramar to Washington State, demonstrating long-range precision strike. These kinds of missions are of particular relevance over the expanses of the Asia Pacific theater in which VMFA-314 and CVW-9 will be expected to operate.

For the Marine Corps, the F-35C represents a huge advance over the Legacy Hornets that previously constituted its TACAIR Integration capability, introducing a new era of low-observability and extensive networking capabilities.

The final Marine Hornet carrier deployment concluded early last year, when the VMFA-323 “Death Rattlers” returned to Miramar after a mammoth 10-month deployment with CVW-17, embarked aboard the USS Nimitz (CVN-68). You can read about that milestone here.

The current acquisition plan includes a total of 420 F-35s for the Marine Corps, 353 of these being STOVL F-35Bs and 67 being F-35Cs for operation aboard the Navy’s aircraft carriers, but it has been heavily implied that these numbers could change. The extended range provided by the F-35C, as well as the USMC's shift away from traditional amphibious operations, could see the F-35C's numbers grow. It's also been stated at the highest level that the Marine Corps' overall F-35 buy could decrease, which may lead to reformation of the mix of F-35Bs and Cs in the fleet.

The F-35B and C carry the same basic air-to-air armament of up to four AIM-120 Advanced Medium-Range Air-to-Air Missiles (AMRAAMs) internally and two AIM-9X Sidewinders on launch rails mounted under the wingtips. However, the C-model’s larger weapons bays can also accommodate 2,000-pound-class weapons like the GBU-31 Joint Direct Attack Munition (JDAM) internally, while the F-35B is restricted to the carriage of 1,000-pound-class weapons in its bays.

The F-35C brings other advantages over the F-35B, including, in the future, the ability to carry the AGM-88G Advanced Anti-Radiation Guided Missile-Extended Range, or AARGM-ER. This weapon is tailored to allow carrier air wings to operate more safely in areas containing advanced air-defense networks, another expected feature of Asia Pacific scenarios. The AARGM-ER is also optimized for carriage inside the F-35C’s weapons bays.

Having access to an anti-radiation weapon like the AARGM-ER means the F-35C can continue the defense-suppression mission previously flown by the Marine Corps’ now-retired EA-6B Prowler as well as the Hornet, both of which were provided with the earlier AGM-88 HARM weapon.

Another weapon that was expected to be introduced to the F-35C is the stealthy AGM-154E Joint Stand-Off Weapon-Extended Range, or JSOW-ER. Originally scheduled for integration before the end of 2023, this was to provide a powerful extended-range strike capability, of the kind that is again relevant in the face of increasingly advanced integrated air defenses among potential opponents, including China. However, the U.S. Navy last year reversed its plans to field the JSOW-ER in favor of another type of stealthy cruise missile, a design related to the AGM-158B Joint Air-to-Surface Standoff Missile-Extend Range, or JASSM-ER. The expectation had been that F-35Cs would be able to carry JSOW-ERs internally, allowing them to employ the weapons while flying in their stealthiest configuration, something they will not be able to do with the JASSM-ER.

In terms of the current AGM-154C-1 JSOW, which allows the jet to engage moving maritime targets, this is planned for internal carriage in the F-35C, while the F-35B will be restricted to external carriage only.

These internal weapons carriage capacity factors could also be a driver in a reformation of the mix of F-35Bs to Cs in the USMC's future inventory.

Electronic warfare (EW) is another area in which the F-35 offers capabilities that were beyond the reach of the Hornet. Under a developing concept of operations, both Marine Corps F-35B and C models will be expected to take on a portion of the EW mantle from the Prowler, using the AN/ASQ-239 electronic warfare suite to detect, locate, identify, and target threat emitters as well as share this data with other platforms. The AN/APG-81 active electronically scanned array (AESA) radar can also be used for electronic attack purposes. The jet also has other tricks up its sleeve in the EW department, and its full capability in this regard is still being explored.

Ultimately, another three Marine Corps squadrons will receive F-35Cs, for a total of four carrier-capable squadrons that will be made available for integration with the Navy. Two squadrons will be stationed at Miramar, with the other pair on the East Coast at Marine Corps Air Station Cherry Point, North Carolina. The priority, however, is the Pacific, with these two squadrons (VMFA-314, followed by VMFA-311) standing up in advance of those at Cherry Point (VMFA-115 and VMFA-251, starting in fiscal year 2024).

Because plans call for delivery of only 67 aircraft, the Marine Corps will not handle training on the F-35C in house, with Marines instead learning to operate the jet with the Navy fleet replacement squadron, the VFA-125 “Rough Raiders” at Naval Air Station Lemoore, California, which include some Marine instructor pilots.

As well as deploying operationally with carrier air wings, the Marine Corps also plans to use its F-35Cs in support of Marine Air-Ground Task Force (MAGTF) commanders in much the same way as it does with its F-35Bs. The ability to deploy squadrons, such as VMFA-314, “to key strategic maritime locations enables the Marine Corps the capability to deter adversarial aggression, and, if required, decisively win in conflict,” the service says. The Black Knights have already put short-field and austere operations capabilities to the test by deploying F-35Cs to the Marine Corps Air Ground Combat Center in Twentynine Palms, California. You can read all about this capability and how it could add extra validity to an expanded F-35C cadre in the USMC in this previous exclusive of ours.

Embracing the expeditionary advanced base operations (EABO) concept for the F-35C means the Marine Corps has even greater flexibility, with these jets able to operate from remote airstrips with limited support, as well as from the decks of supercarriers.

In both types of operations, the Marine Corps is continuing to refocus itself on conflicts with peer-states, especially in the Pacific, whether it’s hopping from island to island or operating at sea, the ability to go to war even if well-established infrastructure is not available has become increasingly important.

It's also worth noting that F-35Cs have now become fully integrated into the Navy's Topgun schoolhouse, of which the Marine Corps is a part. Providing a whole new set of capabilities also means coming up with tactics to make the best use of them, conveying those tactics to crews, and providing threats that can actually challenge such a capable asset. You can read all about the F-35C's game-changing presence in Topgun in this past feature of ours.

Now that the Marine Corps’ Hornet has bowed out of the TACAIR Integration commitment, the service will be entirely reliant upon the F-35C for its carrier-deployed capability, eventually with four such squadrons compared to the current one. With the stealth jet, the Marine Corps will be provided with much-enhanced battlespace awareness as well as a platform that is far better suited to operations in the kinds of highly contested maritime environments that are likely to be encountered during future conflicts. 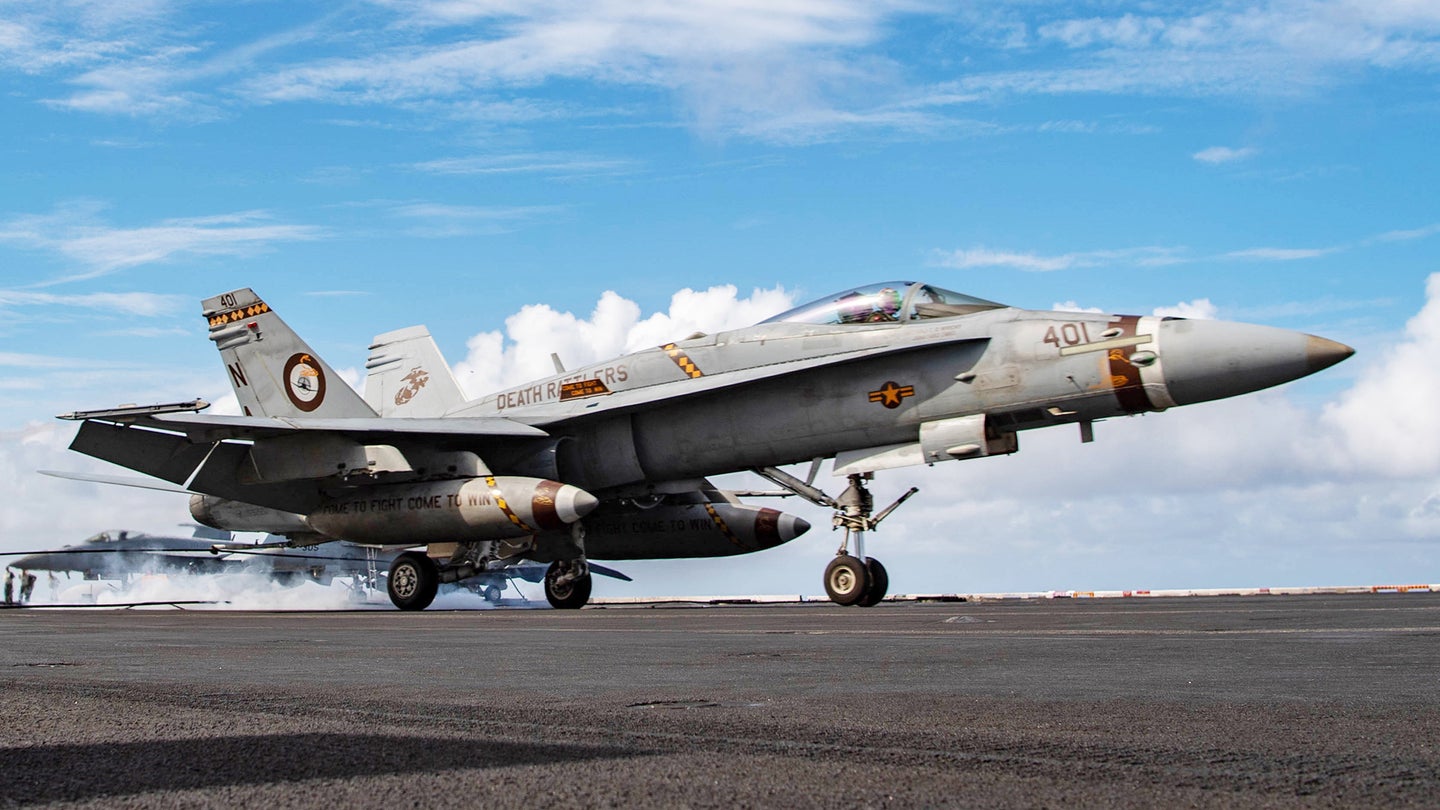 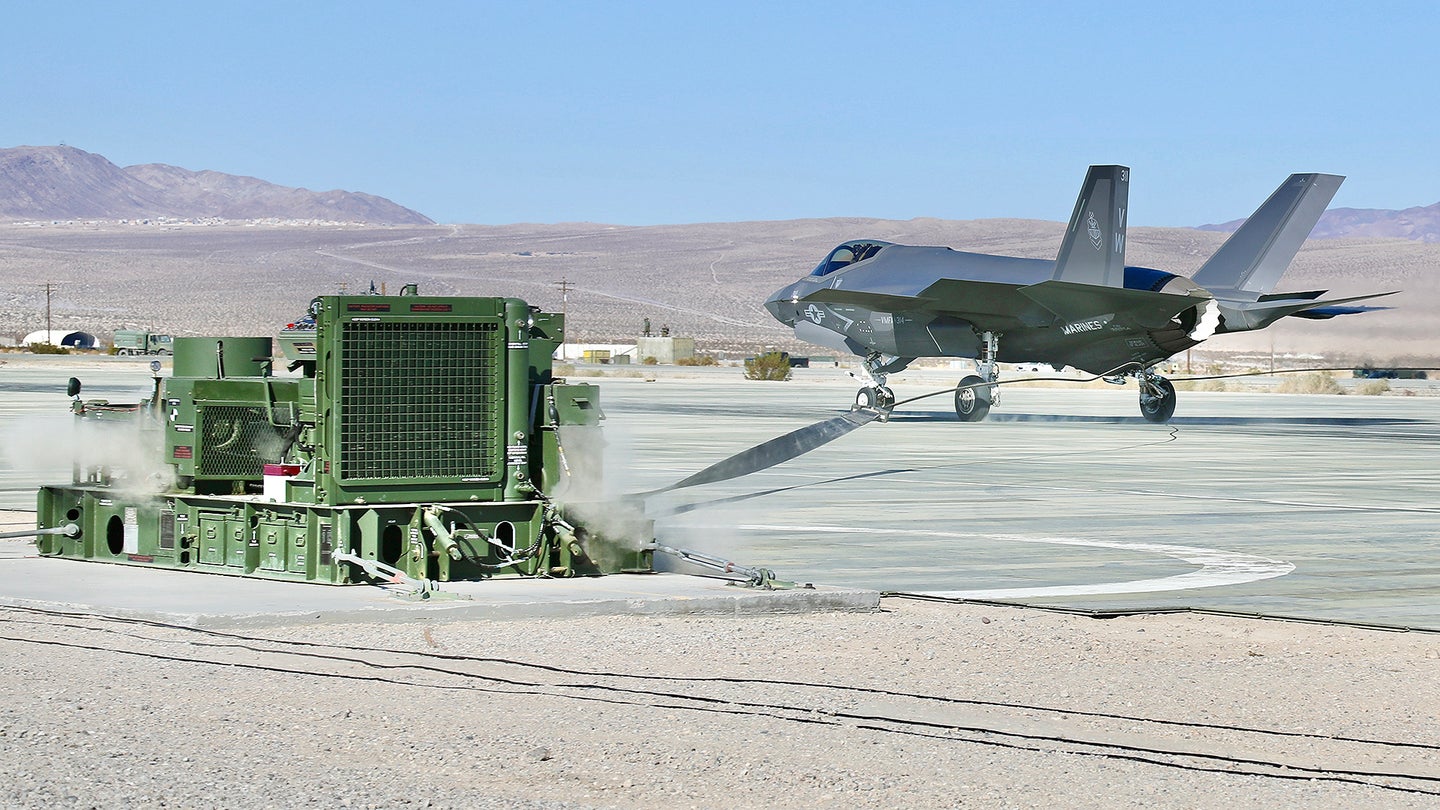 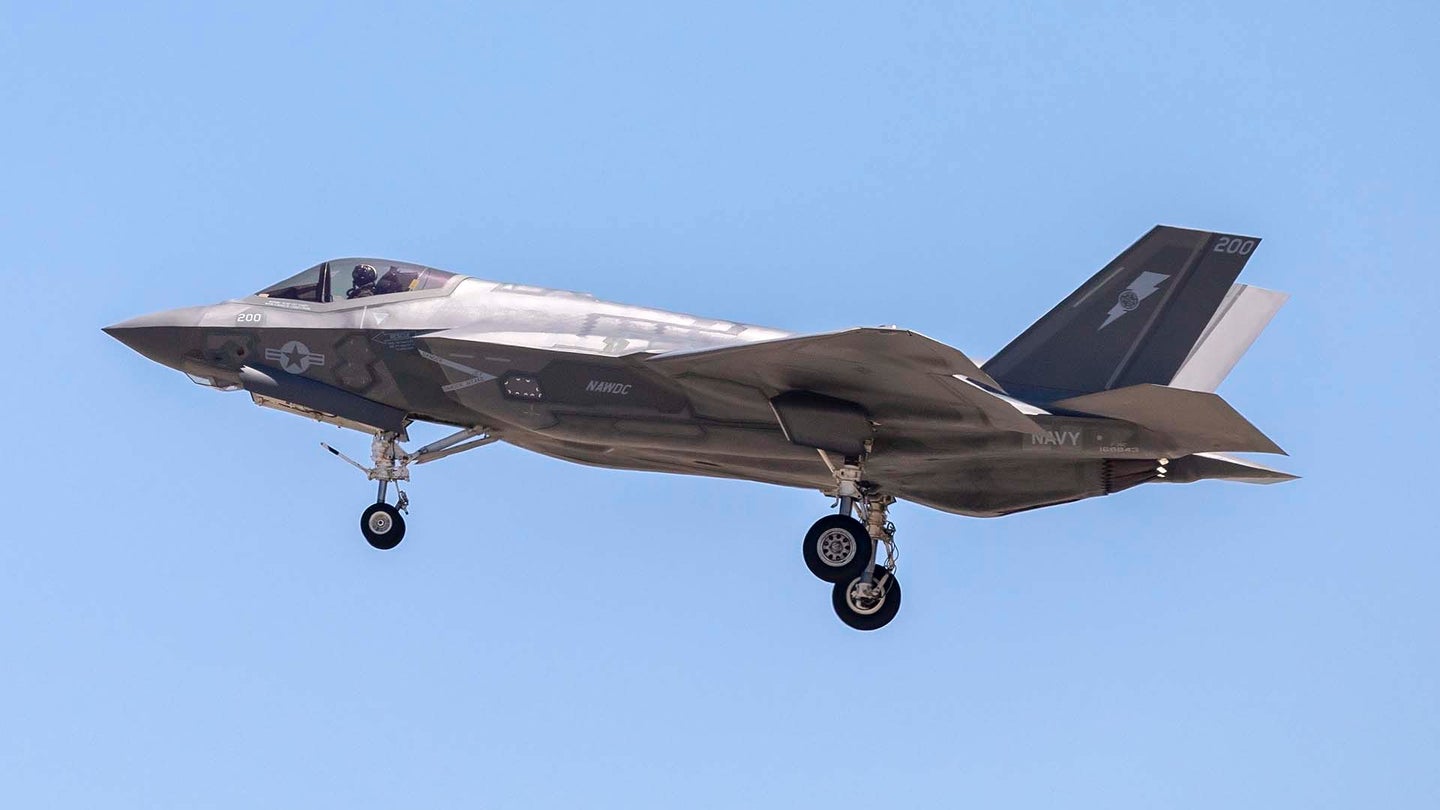