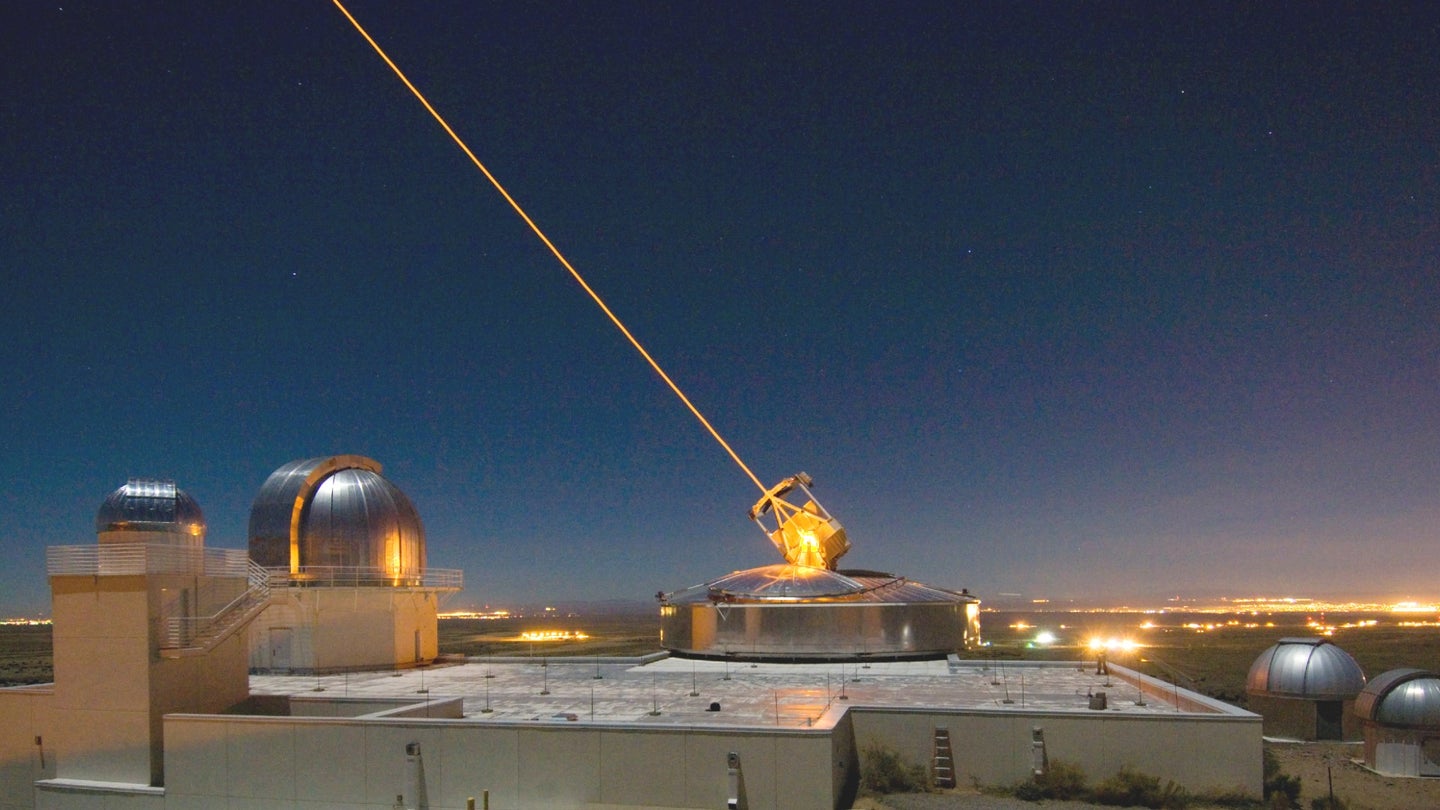 Previously classified adaptive optics technologies enabled the U.S. Air Force Research Laboratory (AFRL) to capture an image of an asteroid’s moon using a telescope measuring just 1.5 meters across. The ability to detect and capture images of space-based objects without the need for massive telescopes could aid in the Pentagon’s efforts to track small, maneuverable satellites in close proximity to one another — an increasingly critical capability as space becomes a major battleground.

The images of the moon were captured at the Starfire Optical Range at Kirtland Air Force Base in New Mexico. The small moon, known as Linus, measures around 30 km in diameter and orbits the asteroid 22 Kalliope at a distance of around 1100 km every 3.6 days. The asteroid and its moon are found in the main belt of asteroids which stretches between Mars and Jupiter. The 1.5m telescope is only one of several telescopes at the base, all of which are claimed by AFRL to be capable of tracking satellites in low Earth orbit (LEO).

In an AFRL press release, Starfire Optical Range astronomer Tanya Tavenner said she “couldn’t believe we imaged a moon around an asteroid with such a small telescope,” and credited the milestone to the engineering skills of Dr. Odell Reynolds, a senior engineer at the range. Another Starfire Optical Range scientist, Dr. Mala Mateen, said the milestone shows that smaller telescopes could be used in the future to produce high-contrast images of objects close together in space.

Adaptive optics technologies were pioneered during the Cold War as the United States sought new methods of tracking Soviet satellites in space. For two decades, much of the research the Air Force conducted on adaptive optics was classified but was revealed to the public in the early 1990s. According to Robert Duffner, author of The Adaptive Optics Revolution: A History, adaptive optics was "part of the strategic defense thinking of the nation, of what we could do to get better images of what was out in space." Duffner told NPR’s Joe Palca in 2013 that the U.S. Air Force was interested in the technology mainly to get clearer images of satellites and missiles, but there was another use the Air Force eyed for the technology.

Scientists at Kirtland AFB had the idea of putting mirrors in space that could reflect the beams from powerful ground-based or airborne lasers to destroy satellites in orbit or ballistic missiles in flight. As in astronomical imaging, the Earth’s atmosphere distorts laser beams as they pass through it. Adaptive optics, such as deformable mirrors driven by sophisticated software, were proposed for re-organizing these distorted laser beams into coherent ones that could be reflected at airborne or space-based targets.

Like many ambitious defense projects of the late Cold War period, the space mirror idea never got off the ground, but the adaptive optics methods developed alongside the concept have gone on to become hugely valuable tools for astronomers to more clearly see objects in space. Other big-name facilities or technologies used in astronomy, such as the now-defunct Arecibo Radio Telescope, in Puerto Rico, also began their lives as defense projects. In addition, adaptive optics has been a decisive factor in making laser weapons more feasible.

The once-classified Starfire Optical Range still conducts secretive satellite tracking and anti-satellite work in addition to its public work in astronomy. According to an AFRL fact sheet, the site facility "operates one of the world’s premier telescopes capable of tracking low-earth orbiting satellites." Dr. Jack Drummond, a Starfire astronomer, says that refining advanced imaging methods such as those used to view 22 Kalliope’s moon, Linus, could help not only in viewing celestial objects but also in detecting satellites in Earth’s orbit.

“The reason we even look at the asteroids at the [Starfire Optical Range] is because they are a good proxy for manmade satellite observations,” Drummond told the Albequerque Journal last year. “Nobody wants to be near each other’s satellites. We can’t tell two satellites to get together. Instead, we look at asteroids and their moons. It’s a perfect analogy, a perfect proxy.”

Tracking smaller, more maneuverable satellites in low-Earth orbit has become a priority for the Pentagon as attacks on American satellites have ramped up in recent years. Late last year, Space Force’s second in command, Gen. David Thompson, stated that America’s space assets are under attack “every single day” from electronic warfare and directed-energy attacks. The optical technologies used at Kirtland very well could fit into the Space Force's mission of protecting American satellites from space-based threats. Telescopes that can detect small adversary-controlled satellites in close proximity to U.S.-operated satellites will be an essential situational awareness and early warning capability aimed at defending American satellites against attacks, both destructive and non-destructive.

There have already been incidents in which foreign-controlled satellites have maneuvered dangerously close to U.S. assets or conducted tests of weapons. In one example in 2019, a small Russian satellite fired a projectile in an on-orbit test. Space Force's Gen. David Thompson later said the Russian satellite "maneuvered threateningly so that they were coming close enough that there was a concern of collision," adding: “Clearly, the Russians were sending us a message.”

Both Russia and China have tested small, highly mobile satellites billed as "inspector satellites." While these so-called inspectors certainly could be capable of performing their stated task, they also could easily maneuver alongside an American satellite and physically tamper with it, slam into it, or even jostle it out of orbit. DARPA has researched similar satellite concepts known as robotic servicing vehicles, or RSVs.

Aside from physical attacks or projectiles, small satellites are currently capable of enacting a variety of directed energy attacks including high-powered microwaves and blinding lasers, radiofrequency jamming attacks, or even spraying chemicals that could disrupt a satellite's operation. Clearly, tracking adversaries' "killer satellites" and protecting U.S. ones is a primary Space Force mission, one that will only continue to become more vital to U.S. national security.

With so many satellites to defend, Space Force is already investing in newer, smaller telescopes that can track objects in space even in daylight. It's possible that a network of similar small telescopes equipped with some of the technology deployed at the Starfire Optical Range could provide critical early warning and tracking surveillance of potentially marauding satellites on a persistent basis. While the introduction of distributed satellite constellations, similar to Starlink, will make some satellite-based capabilities more resilient, they too will be targets and anti-satellite capabilities will adapt to counter them as well.

In other words, the need to track small maneuverable satellites of nefarious origin operating in close proximity of other satellites — where they should not be — isn't going to go away anytime soon.