It was snowing so hard that the airstair truck got stuck, delaying Biden and his entourage from deplaning promptly after arriving. 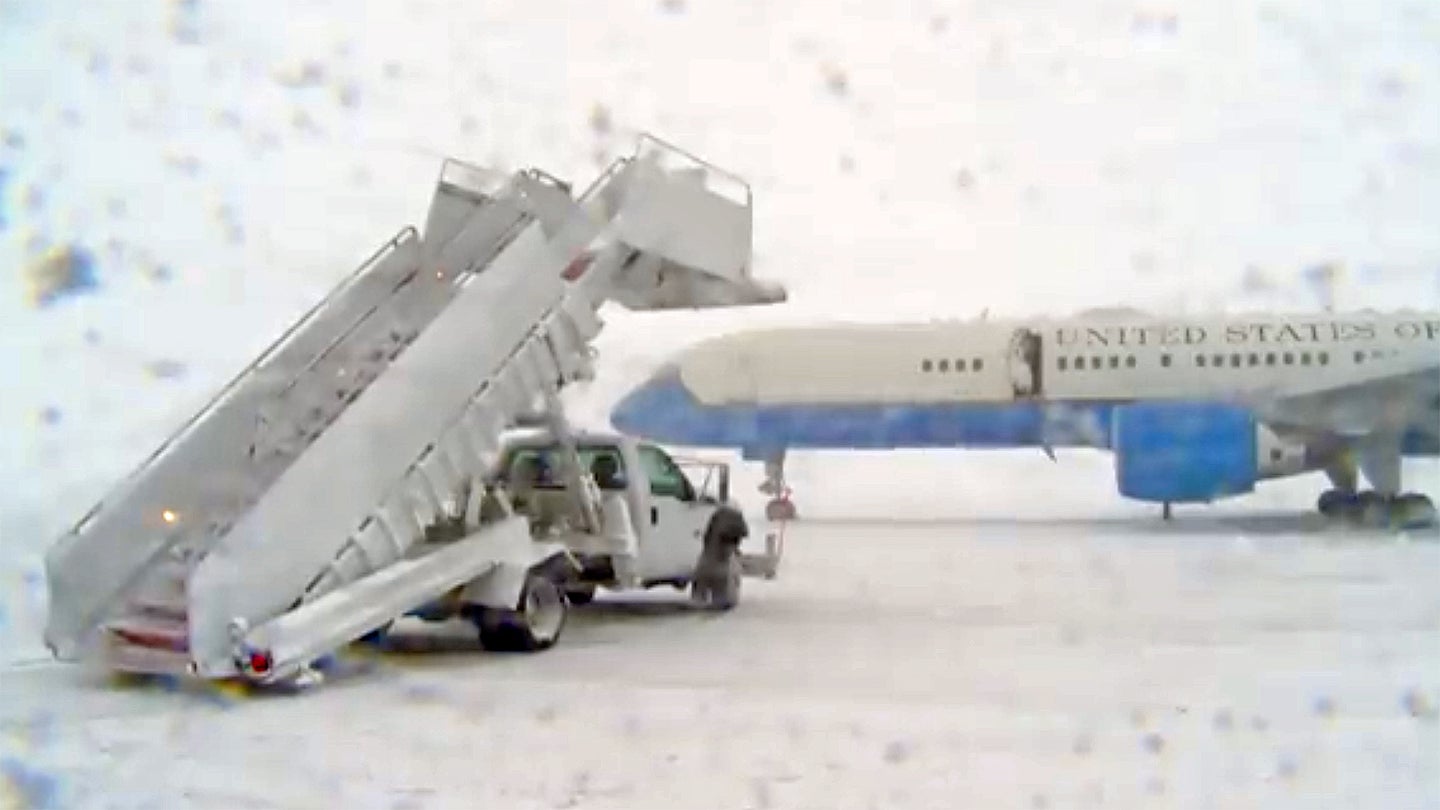 A snowstorm in the Washington, D.C., area left U.S. President Joe Biden, as well as other members of his entourage, briefly stuck on a U.S. Air Force C-32A jet at Andrews Air Force Base in Maryland this morning. Once the President was able to deplane, he had to take a motorcade to the White House since the weather was too severe for 'Marine One' helicopters to fly him there.

President Biden was returning from his home in Delaware, where he had spent the New Year's weekend. Snow began to fall across the Mid-Atlantic region of the United States overnight, with some parts of the D.C. metropolitan area getting as much as 10 inches by the middle of the day. This is the first major snowfall for the capital region this winter and caused numerous commercial flight cancelations and delays, as well as the closure of schools and various government buildings.

Members of the press filmed ground crews working to clear snow ahead of the C-32A's arrival, as well as the jet taxing to its parking spot. They also captured an airstair truck getting stuck in the snow and needing a push to get free, which was part of the reason for the delay in deplaning and getting Biden and others into the motorcade. In one of the videos, you can see what appears to be a military aid carrying a special large briefcase known as the "nuclear football" — which enables the President to order a nuclear strike and that you can read more about here — following Biden down the stairs in the snowstorm.

The Air Force's C-32As are commonly referred to as 'Air Force Twos,' which is the callsign used when the Vice President is on board, but they are also routinely used in the 'Air Force One' role in support of the President's travels. These jets also are regularly employed as executive transports for other high-ranking U.S. government officials, such as the U.S. Secretary of State.

It's impressive on a level that a C-32A, which is based on the Boeing 757 airliner, was able to make the trip from Delaware to Andrews in this weather at all. This underscores the significant upgrades these aircraft have received over the years, including improvements in the cockpit, such as heads-up displays and enhanced vision systems, as well as enhanced communications suites, to be able to perform high-priority VIP transport missions.

The decision to take the flight would have been the product of a risk assessment involving the Secret Service, the White House Military Office, and the Air Force's 89th Airlift Wing, the latter of which flies the service's C-32As, among other stakeholders, based on the transportation options available. Exactly what the weather thresholds are for such operations are not known, but we have reached out to the Air Force for more information.

Regardless, it is not necessarily hard to see how flying the President back to Washington, if at all possible, would have been preferable to traveling on the ground in this weather. Driving from Delaware back to the capital would have presented its own potential hazards and might not even have been seen as a viable option, to begin with. Beyond that, the possibility of a motorcade getting stuck on a highway or some other road would have presented significant security issues and necessitated additional contingency planning to be able to extract the President from such a predicament if necessary. The fact that it was subsequently determined to be safest to take Biden from Andrews to the White House via motorcade rather than on a Marine One helicopter highlights how the weather would have impacted other contingency response options.

All told, in the end, the President appears to have safely gotten back to the White House from his holiday weekend not much worse for wear, given the circumstances.

The Air Force has provided the following statement to The War Zone regarding the decision to have President Biden fly back to Washington, D.C., today:

"Risk assessments are made on every mission and it was determined that the Air Force could safely support the President’s movement to DC today."