The KC-46As would go a long way to bolstering Israel's already small and dwindling tanker fleet. 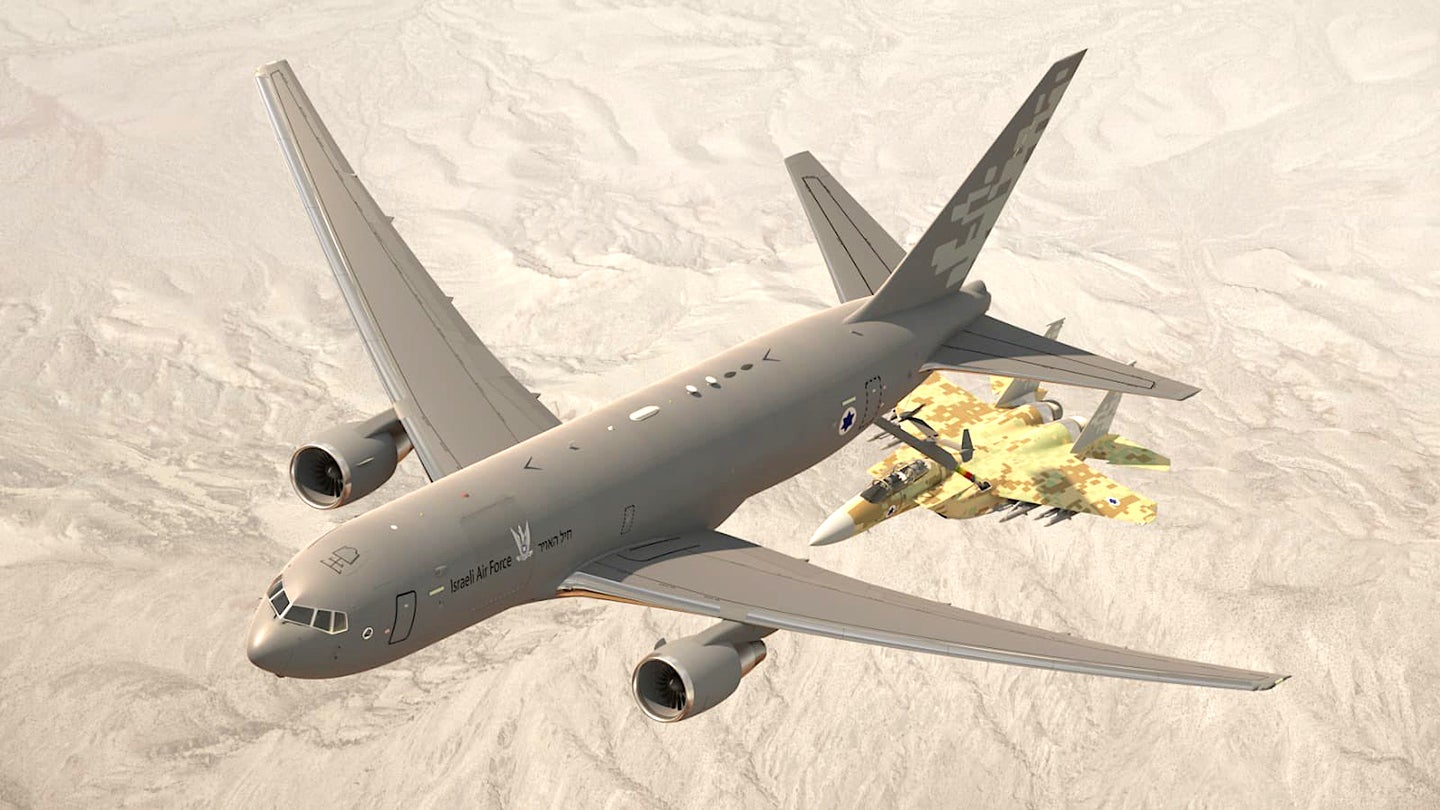 The U.S. government has reportedly declined requests from Israeli officials to accelerate the delivery of KC-46A Pegasus aerial refueling tankers, citing a backlog at the manufacturer that is the result of technical and quality control issues. Those same reports say that Israeli authorities have been particularly keen to get these aircraft sooner rather than later given the critical role they would play in potential airstrikes on Iran's nuclear enterprise.

The New York Times published a story on the deliberations between U.S. and Israeli officials over the KC-46A delivery schedule, as well as the impetus behind the Israeli government's desire to speed up the timetable, yesterday. That built on an initial report on the tanker delivery plans from Israeli newspaper Yedioth Ahronoth. There have already been growing indications that Israel's government, under its new Prime Minister Naftali Bennett, might be looking to at least revive the threat of strikes against Iranian nuclear sites, something the country's military is reportedly now more actively training to do. This all comes as negotiations between the United States and Iran over the latter country's nuclear ambitions, which many fear could include nuclear weapons, appear to be on the verge of collapsing.

The U.S. government first approved the potential sale of eight KC-46As, along with various ancillary items and services in a complete package valued at around $2.4 billion, to Israel in March 2020. In February, the Israeli Ministry of Defense announced it had signed off on the purchase of the first two of those aircraft, but at that time it was unclear when the Israeli Air Force might begin to receive those aircraft. The New York Times' report yesterday said these planes are not presently expected to touch down in Israel before 2024.

There had been reports last year that the Israeli government had been looking to get that initial pair of KC-46As from a lot of aircraft Boeing was already under contract to build for the U.S. Air Force. It's not clear whether or not that is part of the current plan.

The most immediate issue is reportedly the fact that Boeing is already behind schedule in deliveries of KC-46As to the U.S. Air Force, which also sees these tankers as essential to its future plans. These delays are due to a continuing slew of technical problems with the aircraft and quality control slips on the production line. Just in September, it had emerged that Pegasus deliveries were halted for around a month earlier this year after a plastic cap was found jammed in an internal fuel line on one of these aircraft as it flew to its new home at Seymour Johnson Air Force Base in North Carolina. This was not the first time the U.S. Air Force has stopped accepting these planes from Boeing on account of various kinds of so-called foreign object debris, or FOD, being discovered inside, which is a safety issue.

However, even if the production line issues were resolved, the KC-46A's design is in the process of being reworked to address long-standing problems with its boom and the Remote Vision System (RVS) that operators use to guide it into receiving aircraft. Unlike in previous U.S. Air Force tankers, where the boom operators would physically be in a position at the rear of the aircraft to do their work, these individuals on the Pegasuses perform their tasks from the main cabin via an array of cameras at the back of the plane that feed into the complex RVS, which is a hybrid 2D/3D system that requires operators to wear special glasses similar to ones you would use to watch a modern 3D movie in a theater. You can read more about the boom and RVS issues here. The Air Force has said it does not expect to be suitably resolved until sometime between 2023 and 2024. Until then, these aircraft will continue to have an at best limited ability to carry out their core aerial refueling mission.

What this means is that even if Israel did manage to accelerate the timetable for the delivery of its first KC-46As, the actual operational utility of those planes might still be limited until 2024. This is important because the primary driver behind the Israeli government's desire to get these tankers sooner is reportedly the need for improved aerial refueling capacity to support potential strikes on Iran, which would be a complex, high-risk operation.

Right now, the Israeli Air Force relies entirely on an aging fleet of just seven Boeing 707-based tankers, having retired three of these aircraft already in recent years, to support its fixed-wing tactical jets. The KC-46, if its various issues can be fully resolved, would offer Israel a much more modern and capable tanker able to, among other things, simply carry more fuel than these older aircraft.

"While they still fly, the new fleet of KC-46 tankers would give Israel far more range and ability, because it can refuel fighter jets and bombers and also receive fuel itself while in flight," according to The New York Times' report. "The ability to refuel is critical — otherwise Israeli planes would have to depend on the aging tankers or land in the United Arab Emirates or Saudi Arabia. Both countries are rivals of Iran, but neither wants to be implicated in assisting an attack."

At the same time, the Israelis have extensive experience conducting complicated long-range strikes and have continued to bolster their capabilities to do, particularly with their specially configured F-15 Eagle variants. Additional tanker capacity would still help in a larger scale, sustained air operation across extended distances. In addition, it could be particularly valuable for supporting the Israeli Air Force's F-35I Adir stealth fighters. These jets would be extremely useful for penetrating through Iranian air defenses and neutralizing them, helping to ensure the success of any airstrikes, especially those carried out by non-stealthy jets, but they cannot carry range-extending external fuel tanks themselves.

Though there is no indication that the Israeli government is considering doing so, difficulties in acquiring the new KC-46As might prompt discussions about alternatives. Airbus' popular A330 Multi-Role Tanker Transport (MRTT), a new variant of which Lockheed Martin is presently pitching to the U.S. Air Force itself as another option for a future tanker, had been in the running against the Pegasus. There were also reports that Boeing had stifled a plan by Israel Aerospace Industries’ Bedek Aviation Group to offer converted second-hand Boeing 767s, similar to aircraft it had previously sold to Brazil and Colombia. The KC-46A is also based on the 767 design.

That being said, ensuring suitable aerial refueling capacity would just be one part of the complex process Israel would face when planning future airstrikes on targets in Iran. The Iranians are well aware of the threats they face and have increasingly moved nuclear and missile-related infrastructure into hardened underground facilities. Getting at those sites using conventional air-launched weapons would require significant bunker-busting capabilities.

Only the United States has the ability to directly attack the most deeply buried of these targets, especially the underground nuclear facility at Fordo, via conventional bombs. This is the job for the GBU-57/B Massive Ordnance Penetrator carried by U.S. Air Force B-2 Spirit stealth bombers. So, it is not as if Israel can fully wipe out Iran's nuclear program from the air without direct U.S. support.

Israel is known to have at least some U.S.-supplied GBU-28/B laser-guided 5,000-pound class bunker-buster bombs, but these are aging weapons, and their reliability has been called into question in the past. The U.S. Air Force is presently in the process of developing a new 5,000-pound class bunker-buster to replace its own stocks of GBU-28/Bs. There are unconfirmed reports that Israel is already looking to inquire about getting some of these new weapons, but they have yet to enter American service and simply might not be available in any serious quantities for some time still.

The Israeli Air Force could still use smaller bunker-buster weapons to attack less hardened targets, and there are certainly other targets related to Iran's nuclear program that are not so well protected that could be struck by standard guided bombs or standoff missiles.

Any aerial campaign against Iran would no doubt also seek to neuter that country's ability to retaliate against Israel directly using its missile arsenal. Again, while many missile-related sites are underground, Israeli aircraft would still have a significant number of relevant targets above ground to strike. Even Iran's ability to launch ballistic missiles through launch wells in these facilities could potentially be disabled by direct attacks using the bunker-busters they currently have.

In addition, with regards to any underground facilities, Israel's jets could target entry points to hamper immediate access, forcing Iranian officials to expend the time and energy to dig out those sites and anyone who might be trapped in them.

Other kinds of attacks on deeply buried facilities, including commando raids on the ground or ballistic missile strikes might be employed together with a large-scale air operation, as well. Even ways to contaminate these key installations could be deployed. Israel is already widely understood to have been conducting a campaign of assassinations and sabotage, to include cyberattacks, often with the support of the United States, over the years as an alternative means of hobbling Iran's nuclear ambitions. These operations would likely be greatly expanded if Israel were to act directly in a major operation against Iran's nuclear program.

No matter what, at present, Israel does seem to be keen to at least keep the option of some kind of military action open as a deterrent against Iran pursuing nuclear weapons. There is always the potential that this might involve airstrikes or other operations aimed at achieving more indirect objectives, such as targeting key figures in the regime in Tehran.

The Israeli military has been ordered to "prepare for the Iranian challenge at the operational level," Defense Minister Benny Gantz told reporters last week at the Israeli American Council’s annual national summit, which was held in Florida. “There is room for international pressure — political, economic and also military — in order to convince Iran to stop its fantasies about a nuclear program."

“The desire is always to coordinate with [the United States] what we are doing, but at the end of the day Israel is responsible for its own fate and will protect the security of its citizens," Israel Defense Force (IDF) Maj. Gen. Eyal Zamir, who may be in line to become the IDF's Chief of Staff, said at that same event. Still, “it would be a challenge to launch such an operation without coordinating with the Americans,” he conceded.

All of this comes as U.S. officials continue to publicly express more and more pessimism about the future of talks with Iran about a new agreement covering its nuclear program. Then-President Donald Trump pulled the United States out of an earlier multi-national deal in 2018 that had imposed limitations on Iran's nuclear aspirations. Since then, the regime in Tehran has systematically violated all the key terms of the arrangement. The Iranian government has, in particular, stepped up nuclear enrichment activities that Israeli officials and others are concerned could put them closer to building a bomb, should Iran choose to do so. Even so, the U.S. intelligence community has continued to assess that there is no indication that authorities in Iran have actually made such a decision.

Israeli and U.S. officials have reportedly been discussing potential "Plan B" options — which could include new economic sanctions, cyberattacks, or indirect military action against Iranian proxies in the Middle East — if talks with Iran do collapse for good.

Whether or not the lack of KC-46As or any other capability on the part of the Israeli military ultimately prevents it from taking unilateral action against Iran, if officials in Israel determine that course of action to be necessary to protect the country's interests remains to be seen.