The flag is a callback to the ship’s namesake’s heroic service in World War II in a unit made up of soldiers of Japanese descent.

The Arleigh Burke class destroyer USS Daniel Inouye (DDG-118) was commissioned today, December 8th, 2021, in its new homeport of Pearl Harbor, Hawaii. The ship is named after the late Daniel Inouye, a Medal of Honor recipient, World War II veteran, and long-serving Senator from Hawaii. Inouye's incredible lifetime of public service, passing away in 2012 while still representing Hawaii in the Senate after nearly 50 years, made him one of the most well-known native-born sons of that state. But his valor in combat was near super-human and DDG-118's giant blue flag reflects that.

Here is how the Medal of Honor citation reads for the ship's namesake:

Second Lieutenant Daniel K. Inouye distinguished himself by extraordinary heroism in action on 21 April 1945, in the vicinity of San Terenzo, Italy. While attacking a defended ridge guarding an important road junction, Second Lieutenant Inouye skillfully directed his platoon through a hail of automatic weapon and small arms fire, in a swift enveloping movement that resulted in the capture of an artillery and mortar post and brought his men to within 40 yards of the hostile force. Emplaced in bunkers and rock formations, the enemy halted the advance with crossfire from three machine guns. With complete disregard for his personal safety, Second Lieutenant Inouye crawled up the treacherous slope to within five yards of the nearest machine gun and hurled two grenades, destroying the emplacement. Before the enemy could retaliate, he stood up and neutralized a second machine gun nest. Although wounded by a sniper's bullet, he continued to engage other hostile positions at close range until an exploding grenade shattered his right arm. Despite the intense pain, he refused evacuation and continued to direct his platoon until enemy resistance was broken and his men were again deployed in defensive positions. In the attack, 25 enemy soldiers were killed and eight others captured. By his gallant, aggressive tactics and by his indomitable leadership, Second Lieutenant Inouye enabled his platoon to advance through formidable resistance, and was instrumental in the capture of the ridge.

Second Lieutenant Inouye's extraordinary heroism and devotion to duty are in keeping with the highest traditions of military service and reflect great credit on him, his unit, and the United States Army.

Inouye's service during World War II is even more notable as he served with the highly decorated 442nd Regimental Combat Team, a unit made up entirely of soldiers of Japanese descent. And that is where the motto "Go For Broke" on the giant blue flag DDG-118 was seen flying at its commissioning came from, it's the same as the 442nd Regimental Combat Team's motto. The torch is also from the 442nd's insignia.

According to the Daniel K. Inouye Institute's website, the unique aspects of the ship's flag include:

Ships' flags serve as a source of pride and morale for the crew, but also as a way to honor the namesake of the ship itself, as we have seen time and again. Still, DDG-118's triumphant commissioning in Daniel Inouye's home state, and the vessel's historic homeport, is really a special thing. Add in that it happened the day after the 80th anniversary of the Pearl Harbor attack, an event that changed the course of human history and especially the course of Inouye's life, adds all that much more significance to an already significant moment.

We wish the crew of DDG-118 only the best as they execute mastery of their domain on the high seas in their brand new destroyer with a very special name. 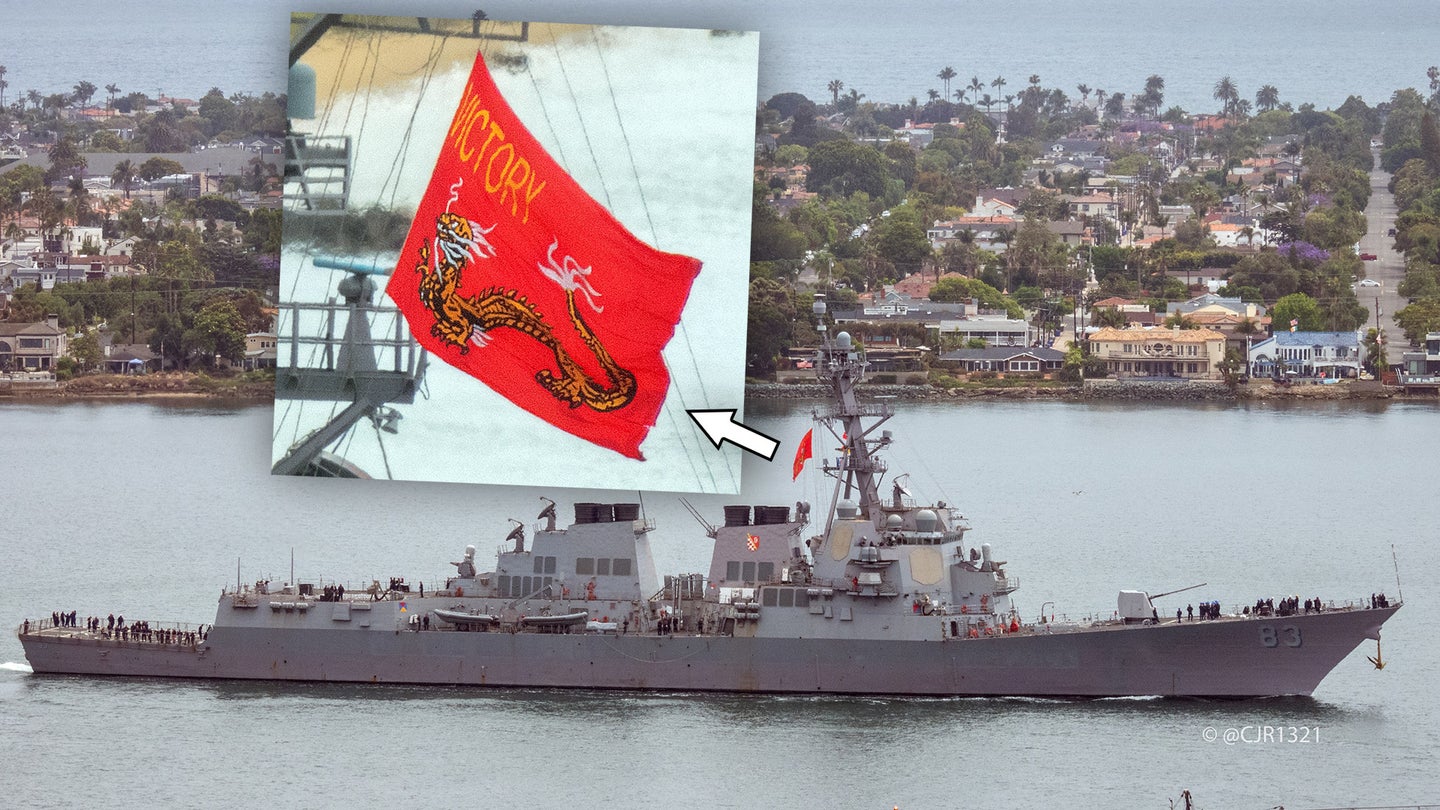 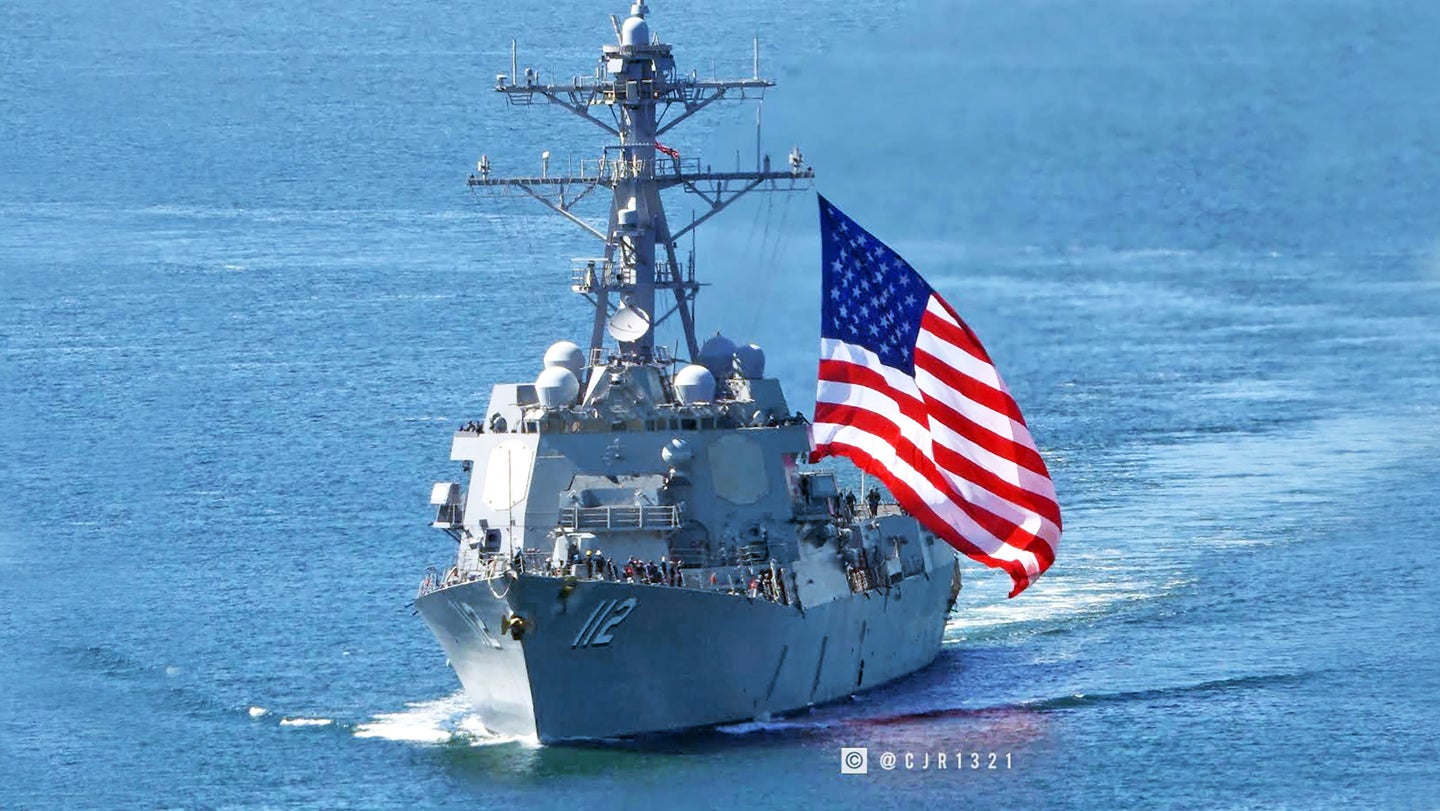 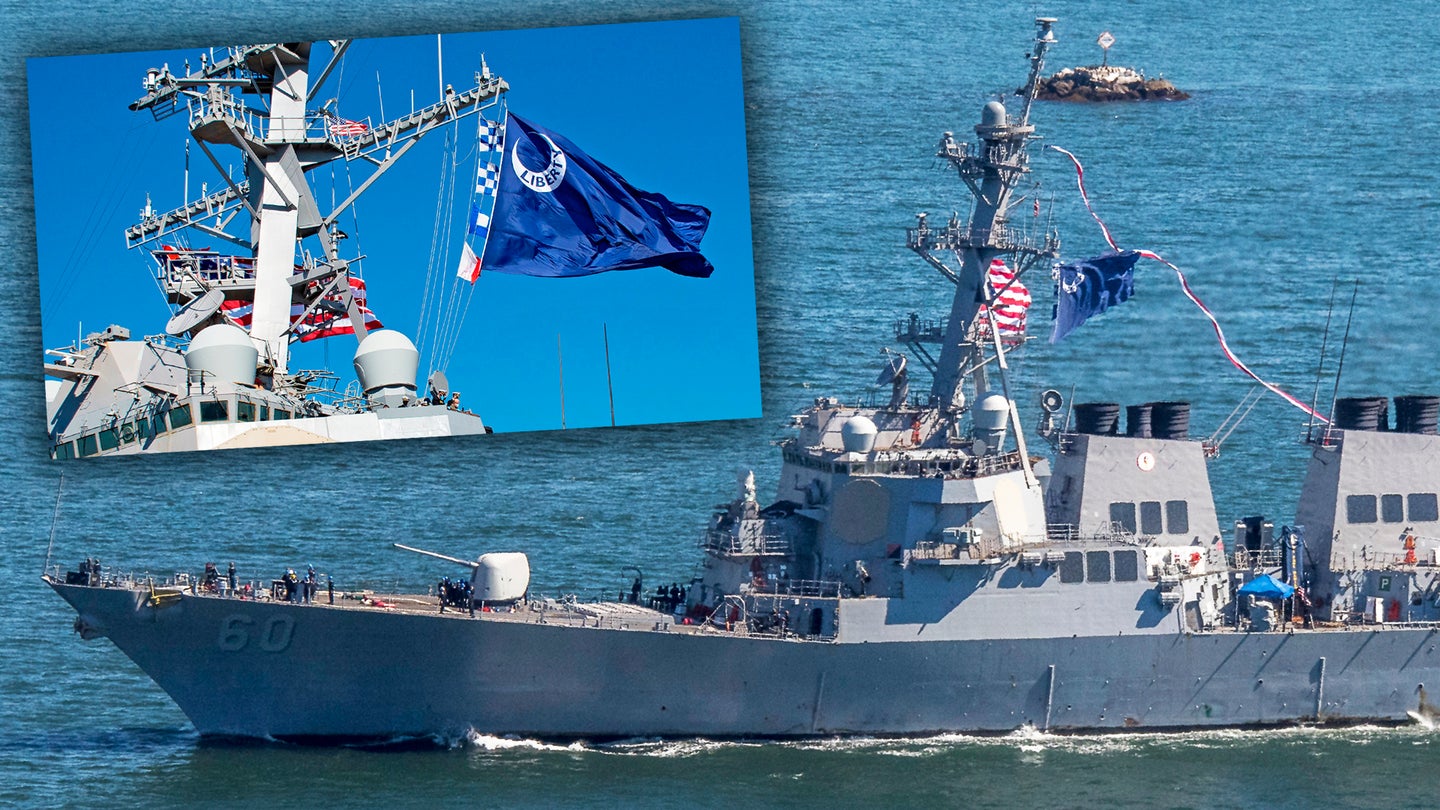 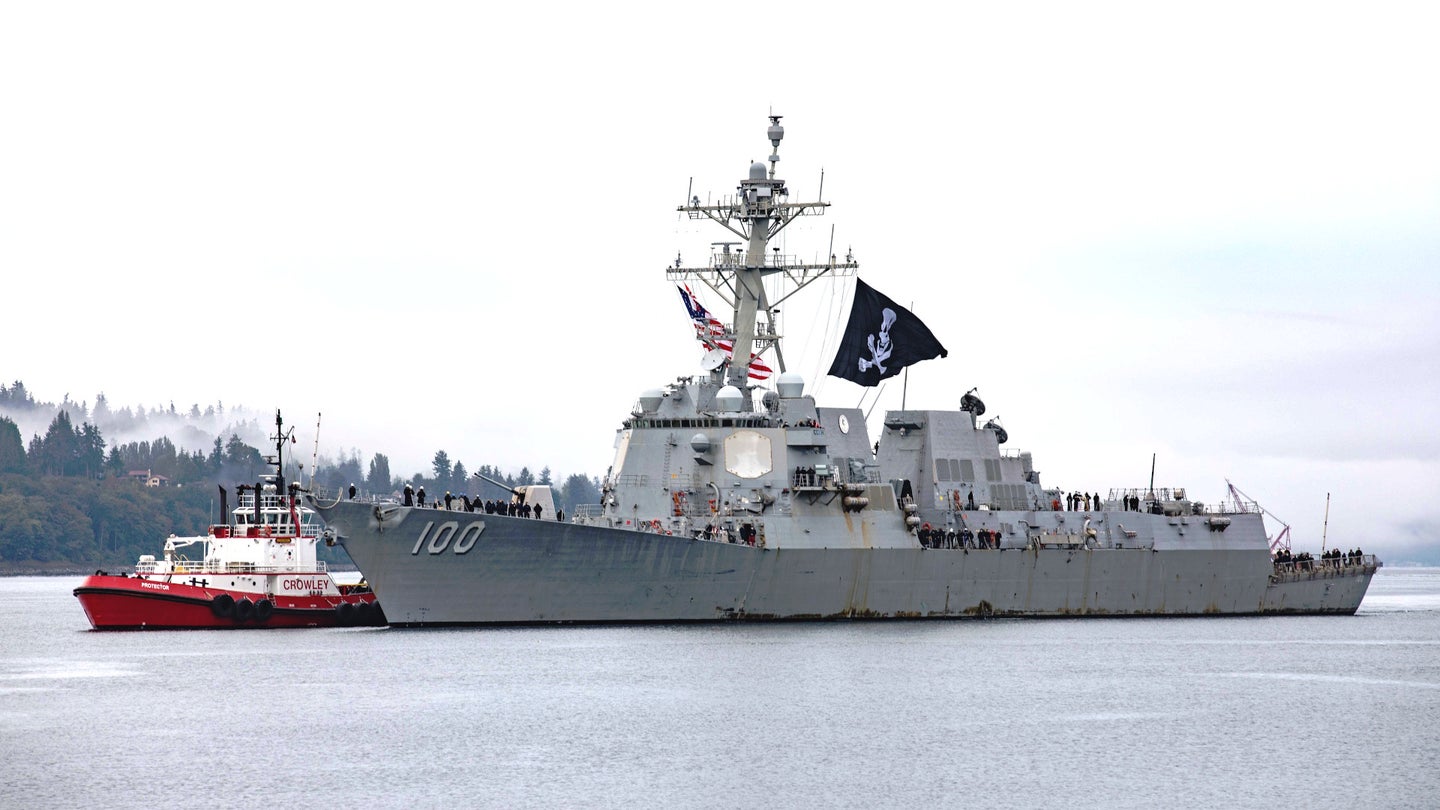 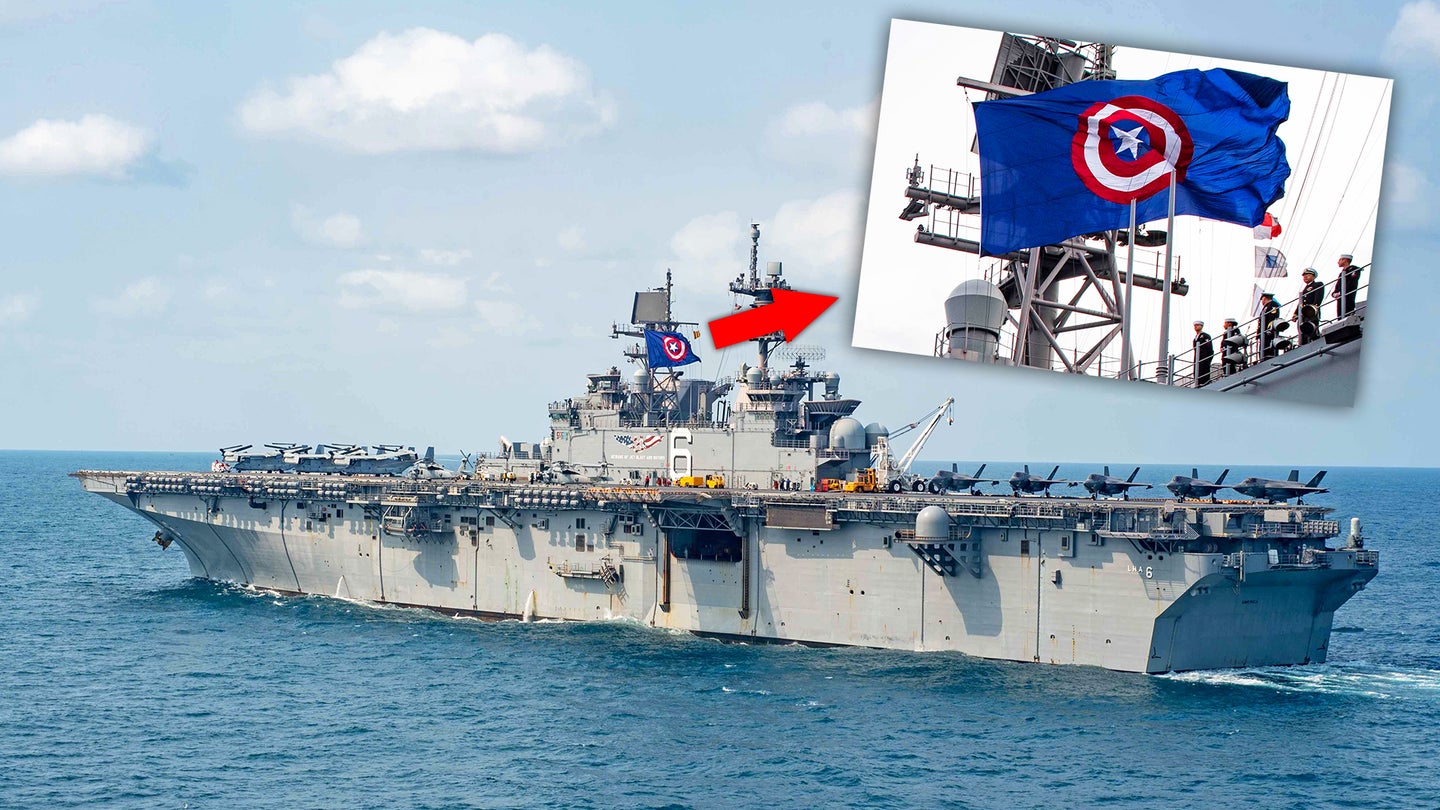