An Iranian corvette under construction in Bandar Abbas had a major accident, video and satellite imagery confirm. 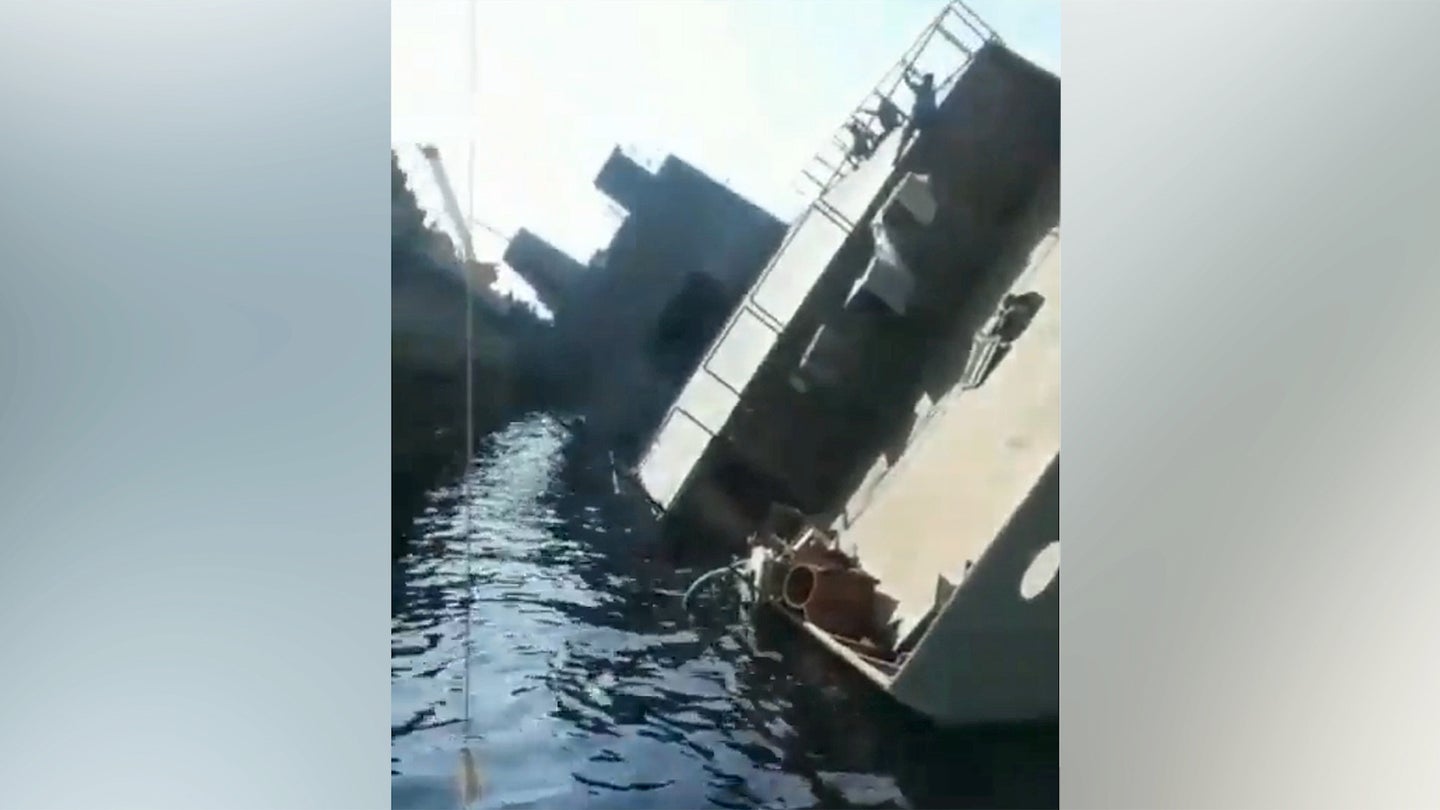 A satellite image confirms that an Iranian naval vessel known as the Talayieh has rolled over in a dry dock in the port of Bandar Abbas on the Persian Gulf. Video had earlier emerged on social media showing this ship lying on its port side in a partially flooded dry dock. Prior to this incident, the Talayieh, seemingly a derivative of the Moudge class corvette design about which there is little publicly available information, was reportedly either in the final stages of construction or fitting out and had been expected to enter service next year.

Late yesterday, Chris Biggers, Mission Applications Director at HawkEye 360, a company specializing in radio-frequency data analytics using a commercial satellite constellation, tweeted an image from Planetscope of Bandar Abbas, which is home to the Iranian Navy's main base of operations, taken on Dec. 4, 2021. Though the resolution is low, it does show a ship in a dry dock that appears to have fallen over. The position of the ship and its general location aligns with what can be seen in the video reportedly showing Talayieh that appeared online on Dec. 4.

From the imagery available, it is difficult to tell what the full extent of the damage to the Talayieh might be. There is yet to be any official word on the incident from Iranian officials. Simply sitting on its side in the water for an extended period of time could lead to a number of issues that, in turn, might require significant time and energy to rectify, especially if there is any internal flooding. As noted, the Iranian Navy had reportedly hoped to put this ship into service sometime next year.

Otherwise, details about Talayieh, including just its basic design and intended mission, are extremely limited. Although the hull form is similar to the Moudge class corvette's, its superstructure appears larger and boxier. Previous Iranian media reports, citing Iranian officials, have indicated that Talayieh could have improved intelligence-gathering and perhaps electronic warfare capabilities, compared to the Moudge class.

Those reports, coupled with the substantial changes in the ship's design, have led to suggestions that it could be intended as a dedicated spy ship rather than just an improved subvariant of the Moudge. That being said, the Sahand, the third Moudge class type to enter service, featured a revised, boxier superstructure. So, it is equally possible that Talayieh simply reflects a further evolution of the design.

The Moudge class design itself is an enlarged derivative of the Alvand class, a type built in the United Kingdom that the current regime in Iran inherited from the government of the Shah after the revolution in 1979. The existing 1,500-ton-displacement Moudge class corvettes are armed with both anti-ship and surface-to-air missiles, as well as torpedoes, a 76-mm main gun, and various smaller cannons and machine guns.

What is clear is that Talayieh is part of a broader effort on the part of the Iranian Navy to modernize and otherwise expand its capabilities, with a particular eye toward conducting maritime operations well beyond the country's immediate periphery. Earlier this year, Sahand, together with the Makran, a sea-base-like ship, became the first Iranian naval vessels to sail into the Atlantic Ocean. They subsequently sailed to the Russian port of St. Petersburg to take part in a naval parade in that country.

Any substantial delay in Talayieh entering service, or worse, depending on how damaged the ship might be now, could be a major setback for the Iranian Navy. It is also the latest in a string of significant losses for the service in recent years due to accidents of various kinds.

In 2018, Damavand, another Moudge class corvette, sank in the Caspian Sea after running aground during a storm. The following year, the Iranian Navy claimed the ship had been "fully revived," but there were questions at the time, based on satellite imagery, about whether an entirely new ship was actually under construction to replace it.

In May 2020, the Konarak, an Iranian Navy support ship, was destroyed in a friendly fire incident during an exercise, killing at least 19 sailors. An unpowered Iranian barge mocked up to look like a U.S. Navy aircraft carrier also sank while being towed back to Bandar Abbas after an exercise last year, creating a navigational hazard.

Then, this year, the Kharg, a replenishment ship that was arguably one of the most important vessels in service in Iran, sank in the Gulf of Oman after suffering a major fire.

The significance of Kharg to the Iranian Navy had prompted speculation that the ship might have been sabotaged, potentially by Israel. Iran has suffered a string of curious fires, including some at port facilities, as well as explosions at various important sites in the country, such as ones linked to the country's controversial nuclear program, in recent years. Reports at the time indicated that Israel, or agents working on its behalf, carried out at least some of those attacks, possibly in coordination with the United States. Since at least 2019, Israel and Iran have been conducting a shadow war against each other's commercial and military vessels, as well.

There were new reports just this weekend about an explosion near Iran's Natanz nuclear facility, which authorities claimed was related to a drill that involved the shootdown of an unmanned aircraft. Separately, one of Iran's knock-offs of the U.S. RQ-170 stealth drone crashed in the country under curious circumstances, as you can read more about here.

However, there are no indications that what happened to Talayieh is related to any of this or is anything more than an accident. It remains to be seen what, if anything, the regime in Iran will say about the incident.

There are now unconfirmed reports that a person may have died in this dockyard accident involving Talayieh.