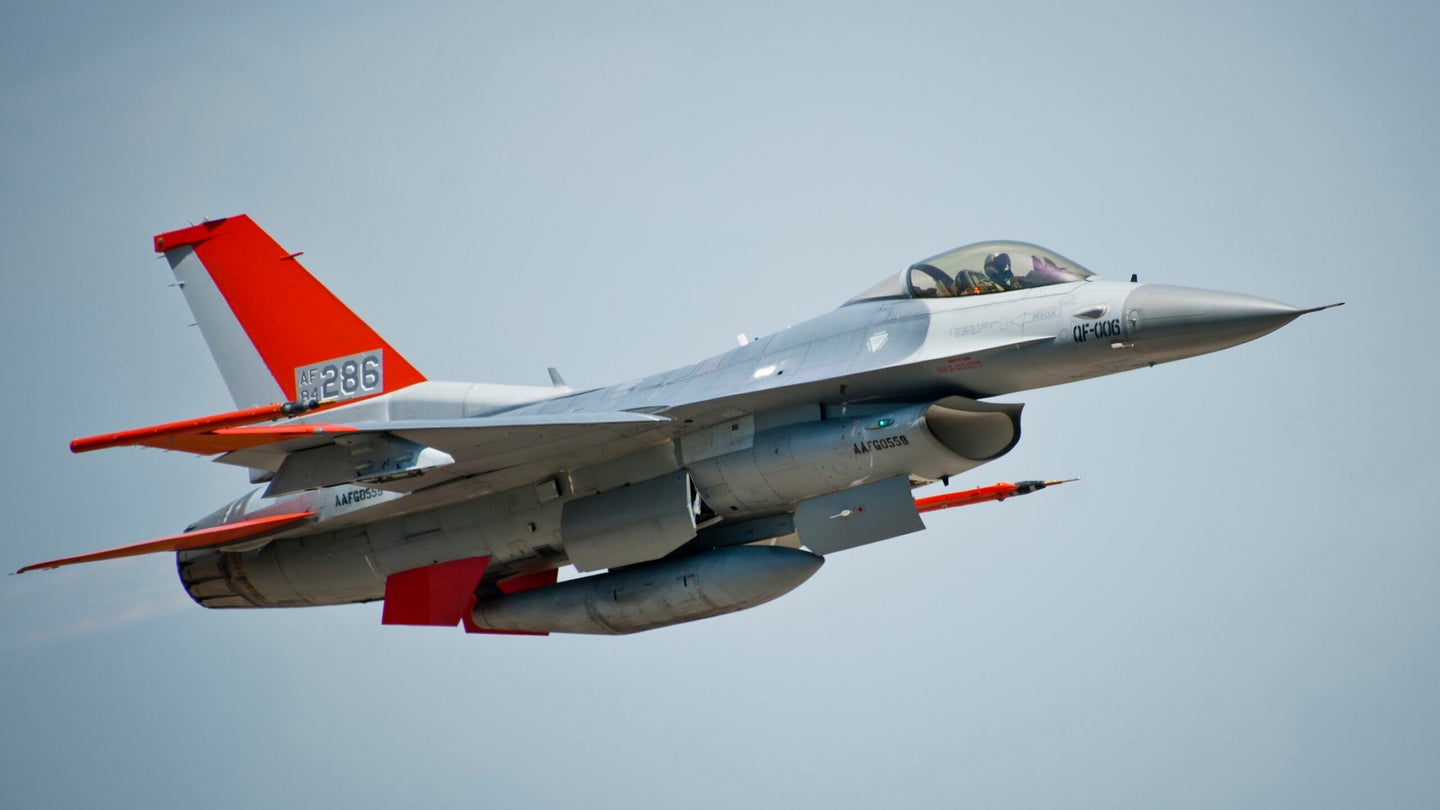 The U.S. Air Force has been busy flying QF-16 Full-Scale Aerial Target, or FSAT, missions in support of the Lockheed Martin AIM-260 Joint Advanced Tactical Missile program. While the AIM-260, or JATM, remains a highly secretive weapon, it’s now clear that test work is well underway, with around 30 FSAT missions last year alone. This would make sense given that the goal is to have the new missile start arming Air Force and Navy aircraft as early as next year.

Our Twitter contact @MIL_STD brought attention to the new developments after examining publicly released Air Force data recording various test missions flown by the QF-16 FSAT fleet. This consists of F-16 fighter jets converted to drones and used as targets and also flown as manned test assets for chase and range instrumentation flights. In drone mode, these aircraft are not always shot down even during live-fire events as often the missiles hurled at them are not equipped with live warheads. As such, close enough, within the blast radius of the missile’s warheads, can be considered a kill. You can read more about these jets here.

The Air Force first disclosed the existence of the AIM-260 program, which is a joint effort with the Navy, in 2019. Those two services intend for this missile to provide a new, longer-range weapon to replace the ubiquitous AIM-120 Advanced Medium-Range Air-to-Air Missile (AMRAAM).

@MIL_STD’s entire Twitter thread, portions of which are embedded below, is well worth a look, but the key details reveal that the FSAT fleet has been supporting JATM test work since April 2020, if not before. In that month, there were eight QF-16 missions in support of the new missile.

Whether some or all of these flights involved actual missile launches is unclear, although it’s certainly possible. Tyndall Air Force Base in Florida was the launch point for these missions and the facility and its target drones are regularly used to support live-fire missile sorties. In the past, it was stated that JATM flight tests should begin this year.

Later in 2020, there seems to have another relative spike in JATM test activity, with six missions flown by the QF-16s in October alone, and another two missions canceled. At the same time, it should be remembered that the FSAT activity detailed in these documents is just one aspect of a much broader joint Air Force/Navy program on the path to getting the missile into service.

While the Air Force is yet to release any such data for this year, it’s clear that 2020 saw plenty of activity for the AIM-260 program, making the fact that these missions have not so far been spotted by photographers or other observers all the more surprising. That is unless the AIM-260 looks nearly identical to the AIM-120 it replaces, which would be an accomplishment considering its supposed major step-up in capability over the already extended-range AIM-120D.

Footage of a test missile fired against an unmanned QF-16:

A video showing QF-4s, the predecessor to the QF-16 in the FSAT role:

Overall, the data from 2020 provides a tantalizing glimpse into a program that is being run very much out of the public eye. So secretive is the new missile, in fact, that the Air Force has invested $6.5 million in building a Joint Advanced Tactical Missile Storage Facility at Hill Air Force Base, Utah, to help keep it secure under Special Access Program security requirements.

What we do know about the JATM itself has come primarily from brief comments made by Air Force leaders and other officials. Indeed, for a long time, the only official mention of the program that was publicly available online was a vague reference about the assistant program manager, an employee of Naval Air Systems Command, winning an award for outstanding logisticians in 2017.

Nevertheless, the new missile is expected to not only out-range the AIM-120 but offer performance that at least matches Chinese and Russian efforts in the field of very long-range air-to-air missiles. The Air Force has publicly said that the emergence of the Chinese PL-15, a long-range air-to-air missile featuring a dual-pulse rocket motor, was a key factor in the decision to start the AIM-260 program.

What we do know about the AIM-260 is that the new missile will have the same general diameter and length as AIM-120. This will, among other things, allow it to be carried inside internal weapons bays on stealth fighters that were designed to accommodate the AMRAAM.

The dimensional requirements mean that a ramjet powerplant, as used in the pan-European Meteor missile, is impossible. So, a new type of solid-fuel motor seems to be a given, perhaps a dual-pulse type to ensure energy across the flight envelope just like on the PL-15. As Aviation Week’s defense editor Steve Trimble has pointed out, this new propulsion unit could be combined with miniaturization of other components as a way of increasing the fuel load to eke out yet more range. Advanced highly-loaded grain propellant, which is also being developed for use in other air-to-air missiles, could help improve performance without increasing the overall form factor.

Trimble has pointed out that different options exist for the warhead, including a directional warhead, which could be smaller than the standard type, but with more accuracy meaning that it could be scaled down. Another option, as we have discussed in detail before, would be a hit-to-kill type missile, with no actual explosive charge, which is another concept that has been discussed in the past in relation to more compact air-to-air missile designs.

As well as the new missile itself, the Air Force is meanwhile busy working on other measures to extend the range at which enemy aircraft can be engaged in the air. This includes fielding new and more capable sensors, such as powerful active electronically scanned array (AESA) radars and infrared search and track systems.

Then there is the work on collaborative aerial engagements, including using networked and third-party sensors to provide targeting data for engagements without the launching aircraft locking the target up themselves. Recent exercises have focused on these types of complex ‘kill chain’ engagements, while the range at which the existing AMRAAM is being employed, in tests at least, is also increasing.

Speaking exclusively to The War Zone last year, Lieutenant Colonel Orion “Rhino” Vail, commander of Tyndall’s 83rd Fighter Weapons Squadron, pointed out the impetus behind speeding up the introduction of new technology in support of operational testing. “We are trying to do all we can in accelerating the future faster,” he said. When asked specifically about the AIM-260, Vail confirmed: “I’ve been involved in discussions about that weapon.”

Meanwhile, it’s worth noting that the AIM-260 will very likely be joined by other advanced long-range air-to-air weapons. Separate to the JATM program is the Long Range Engagement Weapon (LREW) project, being developed by Raytheon. Boeing recently unveiled a concept for a two-stage weapon, the Long-Range Air-to-Air Missile, or LRAAM, which you can read about here.

While the technical aspects of the AIM-260 remain classified, it has been confirmed that the Pentagon aims for the weapon to achieve initial operating capability next year.

Much of that urgency, it seems, is driven by AAM developments in China, especially, amid concerns that the People’s Liberation Army might be increasingly able to outrange American fighter jets with their own advanced air-to-air missiles.

Overall, while this is an ambitious timeline, but with this in mind, it should be no surprise that testing of the new weapon is now in full flow.