Unwanted British Sentinel Radar Planes To Be Picked Up By US Army: Report

The Sentinel Airborne Stand-Off Radar aircraft, controversially retired earlier this year, may now be headed to the United States. 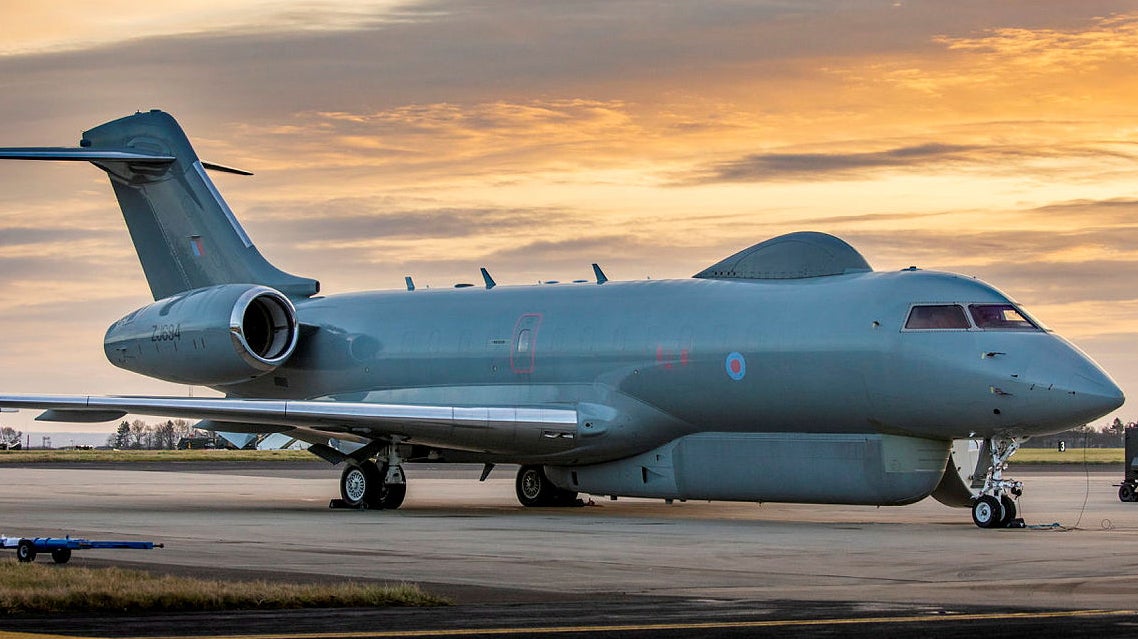 The United Kingdom’s fleet of now-retired Sentinel R1 radar planes may get another lease on life in the United States, potentially with the U.S. Army. The five aircraft, based on the Bombardier Global Express business jet airframe, were finally retired earlier this year and were understood to have been offered for sale as spare parts. The War Zone

argued in the past that the Sentinels could provide the U.S. Air Force with a nearly off-the-shelf augmentation of the tired E-8C JSTARS fleet, but these capable jets could also be of interest to the Army as it continues to enhance its fixed-wing surveillance capacity.

Citing an unnamed source on the team charged with scrapping the Sentinels, the U.K. Defence Journal (UKDJ) website today reported that the aircraft would be made airworthy again and flown to the United States. A deal has apparently been struck between the U.K. Ministry of Defense and a joint Raytheon/Bombardier team and, according to the same industry source, the end-user is the U.S. Army.

“Work has started to make them serviceable for flight already,” the industry source told the UKDJ. “Just enough to get them over the pond. Nothing to do with the mission side.”

That would tally with reports that work was already well underway to remove the mission systems from the aircraft. Among other things, the Sentinels carried the Airborne Stand-Off Radar, or ASTOR, which was developed and supported by Raytheon. ASTOR was capable of being used to produce highly detailed synthetic aperture radar (SAR) imagery, as well as track moving targets on the ground and at sea, as you can more about here.

Provided that the five aircraft — or a portion of the fleet — is delivered to the United States in a stripped-down condition, then the bizjet platforms could be adapted for a wide range of possible missions. The Bombardier Global Express airframe was originally selected as the basis for the Sentinel on account of its high-altitude performance, long-range capabilities, and expansive interior, all of which would lend it to other standoff surveillance missions.

What’s unclear is how the reported transfer of the Sentinel fleet fits in with the U.K. MoD’s previous statement that the aircraft would only be offered in the form of spare parts and were “not for reuse.”

Perhaps, providing the aircraft in a fully stripped-down condition is enough to circumvent this, but it would also not be a surprise if this guideline had been bent to accommodate the sale of these aircraft to a close ally. After all, in recent years, deals have been struck to transfer examples of the C-130J transport and E-3D radar plane from the United Kingdom to the United States.

The Sentinels, which were officially retired in February, only entered service in 2007. As early as 2010, there was discussion about divesting them, despite proving their worth in support of various combat operations around the world.

Originally the plan was to remove them from service in 2018, but demands for their help from commanders in the field pushed that schedule back, with the type ultimately seeing service in Iraq, Libya, Mali, and Syria.

The U.K. MoD justified disposal of the Sentinel on account of “obsolescence” and the cost that would be required to keep it reliable in the long term. Regardless of the long-term viability of its capabilities, it was the victim of being a niche asset within an air force that has been exposed to repeated and significant cutbacks, withdrawing entire aircraft fleets at a stroke.

Despite not receiving planned major upgrades as a result of the retirement plan, the aircraft still have a lot of life left in them. In the past, The War Zone made the case for the Sentinel as a stopgap solution to the U.S. Air Force’s requirement for a JSTARS successor, but the competition to replace this aircraft was effectively abandoned in 2018. Instead, the service is pursuing a system-of-systems approach to replacing JSTARS under its Advanced Battle Management System (ABMS) initiative.

Now, it seems possible that the U.S. Army, not the Air Force, will be the recipient of the ex-RAF Sentinels, although the USAF is still known to want to increase its fleet of E-11A Battlefield Airborne Communications Node (BACN) airborne communications platforms, another aircraft based on the Global Express airframe. It may also be looking for a spare parts source to support a larger E-11 fleet. However, this program has Northrop Grumman as its prime contractor, not Raytheon, so this seems less likely.

Wherever they ultimately end up, the aircraft's various satcom domes and other fairings could potenially be reused, saving on costly new modifications that would otherwise need to be developed and flight-tested for a special missions platform.

As for the Army, the service has already been using two modified, contractor-owned and operated Bombardier Challenger 600/650 business jets configured as intelligence, surveillance, and reconnaissance (ISR) platforms for testing and evaluation purposes. These testbeds, known as the Airborne Reconnaissance and Targeting Multi-Mission Intelligence System, or ARTEMIS, have been deployed for field tests in Europe and the Pacific.

Raytheon, the company now reportedly looking to buy at least some of the retired Sentinels, along with L3Harris is working on prototypes of a key payload, known as the High Accuracy Detection and Exploitation System, or HADES, that will go into a future Army ISR aircraft. Though ARTEMIS is using a business jet airframe, the service has yet to decide if this is its actual preferred platform. It is also considering the possibility of using an airliner-sized aircraft or a high-flying drone.

According to Aviation Week’s Steve Trimble, the timeline for HADES might involve introducing a fleet of “fewer than 10 business jet derivatives,” followed by the introduction of a definitive solution in around 2035. What platform carries this sensor system is expected to replace the aging RC-12 Guardrail, as well as the more modern MC-12 Enhanced Medium Altitude Reconnaissance and Surveillance System (EMARSS), both of which are derived from the popular Beechcraft King Air series of twin-turboprops. It is possible that these future aircraft could be a replacement for the Army's larger RO-6A Airborne Reconnaissance Low-Enhanced (ARL-E) aircraft, which are adapted Dash 8 twin-turboprops, as well.

HADES is expected to be capable of being deployed to hotspots around the globe, remain on station longer, then gather intelligence at longer standoff ranges and from high altitudes, increasing the amount of data it can acquire as well as improving its survivability.

Alongside ARTEMIS and its evolving plans for HADES, the Army is preparing to use an adapted Global Express airframe as another ISR trials platform. This is the Airborne Reconnaissance and Electronic Warfare System, or ARES, and it’s been installed on the bizjet by L3Harris Technologies. The aircraft reportedly made its first flight earlier this year.

Again, we don’t know that the ex-RAF Sentinels are going to end up in U.S. Army service, but it’s clear that this service is increasingly aspiring to operate larger, more capable, and jet-powered ISR aircraft, which could include types in this class.

Indeed, the kinds of platforms and capabilities that the Army is eyeing for HADES, at least, parallel those that the Air Force was considering for its abortive JSTARS replacement effort. At the same time, HADES is expected to offer some combination of synthetic aperture radar (SAR) and ground-moving-target-indicator (GMTI) functions that are currently found on the E-8C, and which were previously found on the Sentinel R1.

It’s too early to say whether the U.K.’s unwanted Sentinels finally fill a piece of America's vast ISR puzzle. However, it’s fairly obvious that these airframes would be a good basis — and presumably a well-priced one — for any one of a number of aerial surveillance programs that are now beginning to take shape.

The Army Lays Out Plans For Its New Intelligence Gathering Jet

The Army has an ambitious scheme for a new surveillance aircraft to pick out ground targets at extended ranges.