The missile was designed to fly thousands of miles at over Mach 3 and 80,000 feet before diving onto its target and detonating its nuclear payload. 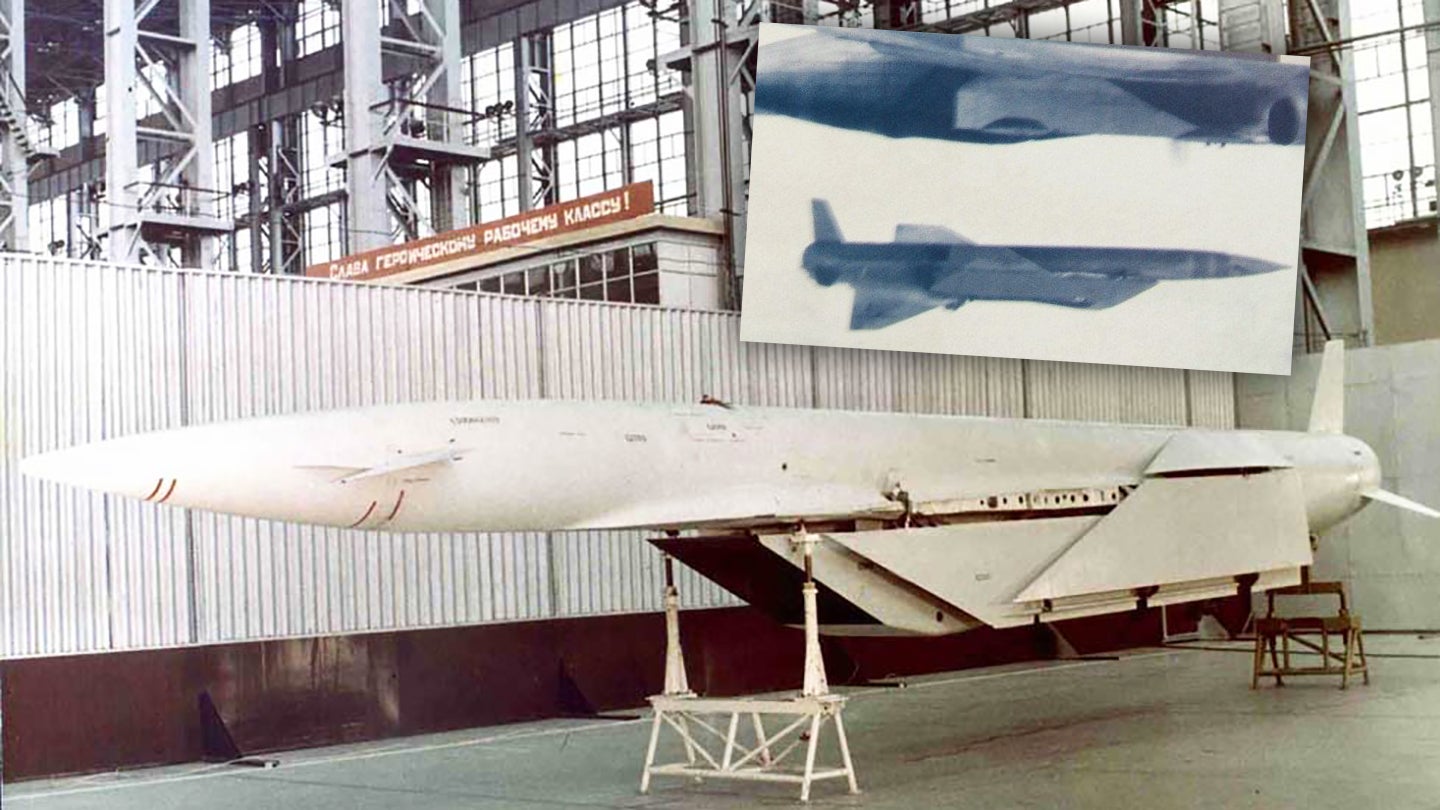 Long-range subsonic cruise missiles are now a familiar part of the strategic arsenals of multiple countries, whether launched from aircraft, surface warships, submarines, or from mobile ground launchers. But in the Soviet Union, in particular, there was a little-known battle for preeminence between cruise missiles like those and much more ambitious heavyweight supersonic missiles. By the early 1980s, Moscow was sponsoring two distinctly different approaches to cruise missiles, although the mighty Meteorit — planned as a Mach-3-capable twin-warhead weapon with a range of over 3,000 miles — was ultimately doomed to failure.

The background to this impressive weapon was a decree from the Soviet government in December 1976 calling for the development of new strategic cruise missiles that would be suitable for adaptation in air-launched, sea-launched (surface warships and/or submarines), and land-based versions. The result would be a Soviet answer to the American AGM-86 Air-Launched Cruise Missile (ALCM) and the Tomahawk, which were fast emerging as a survivable and cost-effective means of delivering nuclear warheads over standoff distances, with great precision.

On Moscow’s order, three design teams began work and, of these, Raduga’s offering was closest to the AGM-86, comprising the small, subsonic Kh-55 cruise missile. This featured broadly the same aerodynamic configuration as the American missile, with a straight folding wing and folding tail surfaces. It was powered by a pop-out turbofan engine and had an inertial navigation system with terrain contour matching (TERCOM).

The Novator design bureau came up with an analogous solution, with the 3M10 Granat missile. In fact, so similar were the Kh-55 and the 3M10 that, for many years, Western sources erroneously suggested they were different variants of the same basic weapon.

Then there was NPO Mashinostroyeniya, which came up with a very different — far more advanced — idea for a ‘universal’ cruise missile (one that would be employed by the air force, navy, and ground forces), with its 3M25 Meteorit. Unlike its rivals, this was a huge supersonic missile, conceptually and visually more akin to the high-speed cruise missile projects explored in the 1950s in the Soviet Union and the United States. These were typified by the ground-launched Burya, which you can read about in detail here, and the Navaho, both of which were abandoned in favor of intercontinental ballistic missiles (ICBMs). Some work continued, however, the conceptual study behind the Meteorit dating back to the late 1960s.

The missile was around 42 feet long — more than twice the length of a Kh-55 cruise missile — and had cropped delta wings that folded in three locations, plus canard foreplanes, a vertical tailfin, and twin horizontal tailplanes. An air intake below the fuselage fed the ramjet engine and turbojet sustainer, while the submarine-launched and ground-launched versions also featured two liquid-fuel rocket boosters for launching. Launch weight with the booster section was nearly 30,000 pounds, or around 14,000 pounds without. Guidance was a combination of an inertial system and TERCOM.

Improvements in air defenses meant that special measures had to be taken to ensure the Meteorit would be able to get to the target unscathed, not reliant only on speed and altitude. The missile was equipped with a towed decoy, and there are also persistent but unsubstantiated reports that it also used some kind of ‘plasma stealth’ technologies, cruising in a pocket of ionized air to mask its radar signature. This could also relate to the so-called Marabou plasma stealth system, which different reports suggest may have been intended for use on the production Meteorit or otherwise used the missile as a testbed.

Another unusual aspect of the missile was its payload. The Meteorit was planned to carry two 90-kiloton nuclear warheads that would be ejected to strike targets up to 100 kilometers (62 miles) apart, each powered by an individual rocket engine. While this was initially attractive, the dual warhead was banned under the 1978 Strategic Arms Limitation Talks (SALT) II treaty, removing this innovation.

Interviewed by the state-published Rossiyskaya Gazeta in September 2020, former NPO Mashinostroyenia chief designer Herbert Yefremov recalled that the Soviet leadership had envisaged the Meteorit as a counter to the U.S. Tomahawk (and presumably ALCM) and noted that “one Meteorite was equal in efficiency to dozens of Tomahawks.”

As far as Western intelligence was concerned, the new missile first broke cover when it was identified at the missile test range at Barnaul, and it was therefore given the temporary designation of BL-10. The first launch from a ground test rig took place in May 1980, but the missile failed to properly leave its container. In all, the first four test launches were unsuccessful. Finally, in December of that same year, the missile managed to cover a distance of around 30 miles, woefully short of the design performance.

The Meteorit-A was to be carried externally by a version of the venerable Bear strategic bomber, the Tu-95MA version being adapted from an early-series Tu-95MS missile carrier. The aircraft had underwing hardpoints for two missiles. Although models exist showing a four-missile arrangement, it’s not clear if this was ever a serious plan. With a pair of Meteorit-A missiles on underwing pylons, the internal weapons bay was able to accommodate six Kh-15P nuclear-tipped defense-suppression missiles, equivalent to the American AGM-69 SRAM.

The first air launch was in January 1984, but was unsuccessful, ending in the self-destruction of the missile after 61 seconds of flight. Another launch in May 1984 ended in a similar failure, and the Meteorit-A was canceled at the end of the same year.

To Western observers, the Meteorit-A was known as the AS-X-19 Koala, and it was, for a while, expected to arm the Tu-160 Blackjack supersonic bomber, since its existence was apparently confirmed to the then U.S. Secretary of Defense Frank Carlucci at the same time that he was shown around one of these aircraft during a visit to the Soviet Union in 1988.

The Project 667 Yankee class SSBN was chosen as the basis for an SSGN version that would carry the Meteorit-M, after plans to adapt an existing SSGN, the Project 949 Oscar class, were ruled out as being too complex, due to the missile’s prodigious length. Thought was also given to adapting a Project 675 boat as a testbed, before modifying Project 667A K-420 as the sole Project 667M Yankee Sidecar class, which was also intended to take the Meteorit into service.

Work on modifying the submarine began in June 1980, and it was back in the water in October 1982, followed by sea trials that lasted until August 1983. Official state tests were then undertaken until November 1983, initially without the missiles fitted. Meanwhile, more than 30 missile launches took place from test stands at Kapustin Yar and in the Black Sea.

The first submarine launch was in the Barents Sea in December 1983. But the program was fraught with difficulty, including due to the underwater launch sequence (previous generations of Soviet SSGNs had to surface to launch their missiles). Other problems also emerged related to the guidance system and self-defense equipment.

Official joint tests of the Meteorit-M began only in 1988, initially using ground test rigs, and then with the Project 667A boat. Only around half of these launches were successful. With that, industry and the navy decided to abandon work on Meteorit-M at the end of 1989, and the Project 667A was returned to the fleet with torpedo-only armament.

The Meteorit-M received the Western reporting name SS-NX-24 Scorpion. Had it been successful, Yefremov says that, by the beginning of the 1990s, the missile could have been installed on 10-12 Project 667A submarines.

The most elusive version of NPO Mashinostroyeniya’s missile was the Meteorit-N version intended for launch from, presumably, a road-mobile transporter-erector-launcher (TEL). As far as can be ascertained, no imagery has ever been revealed of the proposed TEL and there is no confirmation that the ground-launched missile was ever tested. On the other hand, U.S. intelligence was certainly aware of the weapon, or plans for it, and the designation SSC-X-5 was assigned accordingly.

Perhaps surprisingly, considering the paucity of information, some Russian sources suggest that the development of the Meteorit-N was the most advanced of the three versions. “Almost the entire volume of tests required for adoption and series production was completed,” a TASS

Ultimately, 37 Meteorit missiles were launched, but reportedly only one managed to reach the design range of 5,000 kilometers. The program was “a complete fiasco” in the words of Steven J. Zaloga in his book

A prototype or full-scale mockup of the Meteorit at the Konstantin E. Tsiolkovsky State Museum of the History of Cosmonautics, Kaluga, seen bottom right in the second set of photos:

Instead of the proposed ‘universal’ cruise missiles, the Soviet military ended up with two different subsonic designs for the different land/sea/air applications.

Novator’s 3M10 Granat (SS-N-21 Sampson) missile was deployed on submarines, while the Raduga Kh-55 (AS-15 Kent) become the new air-launched cruise missile. A ground-launched version of the Granat, the RK-55 (SSC-X-4 Slingshot) was deployed only briefly before it fell victim to the Intermediate-Range Nuclear Forces (INF) Treaty signed in December 1987, which saw it outlawed.

While the Meteorit program was ultimately a failure, the technology involved and the basic premise of a high-flying, high-speed strategic cruise missile has never really gone away, in Russia at least.

Attempts have apparently even been made to resurrect the Meteorit, including a low-cost version reportedly offered in 1998. A decade later, at the MAKS 2007 airshow, a mockup of the Meteorit made a surprise public appearance. At the time, the TASS news agency reported that undisclosed developments in electronics finally made the missile viable. Since then, mock-ups and models have made repeat appearances at MAKS and at other arms exhibitions while others have gone on public display in museums and industrial sites.

Industry officials in Russia have also periodically made reference to the program, shedding a little more light on it and the hopes that were pinned to it. Speaking to TASS in October 2020, former NPO Mashinostroyenia chief Yefremov noted that Russia’s current military-industrial complex compared less than favorably with that in Soviet times: “The unique Meteorite strategic cruise missile can hardly be put into production again,” he lamented. “The restoration of a very complex and expensive project even by the standards of Soviet times is impossible in modern conditions.” Certainly, the huge distance the missile was supposed to cover (when working properly) puts it firmly in a class of its own, even today.

While a production version of the Meteorit has so far remained unrealized, Russia has since returned to the concept of high-speed cruise missiles for more strategic missions, but now with hypersonic flight performance — generally regarded as anything over Mach 5. Russia is now widely considered one of the leading developers of weapons in this category, with the Kinzhal air-launched ballistic missile already in limited service. The Avangard, which mounts a hypersonic glide vehicle (HGV) atop a heavy ICBM employs a very different concept but is also now fielded. So, while the Meteorit may have proven a dead-end, the legacy of the high-performance strategic cruise missile remains alive and well in Russia today.