Goodyear’s airships are more capable than the blimps they replaced, and apparently, they can climb like a homesick angel. 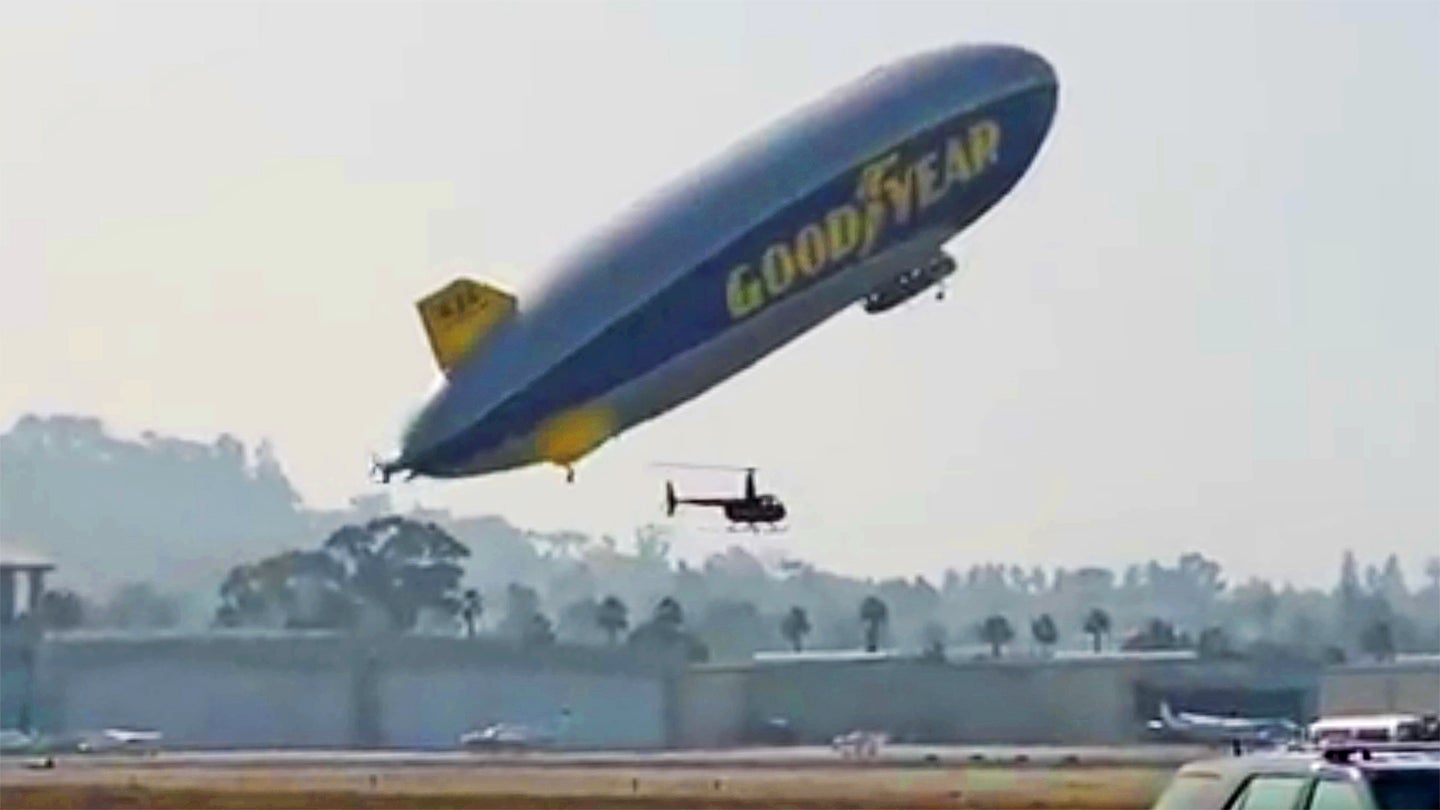 Maximum performance climbs are always a spectacle to behold. It can be an MD-80 Mad Dog or an F-15 Advanced Eagle, seeing a flying machine giving its all at low-level just prior to clawing its way into the heavens is the ultimate crowd-pleaser. But have you ever seen an airship pull off such a feat? Probably not. Thanks to Scott Lowe (@tropicstation), we get a glimpse of just that.

The Goodyear Blimp (it's really a semi-rigid airship or Zepplin now) is about as iconic of a flying machine as it gets. Pretty much everyone has encountered it at some point in their lives and it remains a staple of major sporting events, sometimes acting as a camera ship for incredible aerial photography of the exhibition and even of game-opener military flyovers. It's also by far the average American's closest connection to lighter than air flight. As such, it works as something of an ambassador for this unique realm of aviation and to times gone by when it had a greater presence in the skies. But seeing a Goodyear Blimp meander overhead is a far cry from seeing one execute a low/missied approach down a runway before entering into a stunning maximum-performance climb.

Check it out for yourselves!:

This awesome sight was captured by Scott Lowe, who keeps a close eye on aviation happenings in Southern California. Here's what he told The War Zone about the awesome video:

I was attending the Long Beach Festival of Flight at KLGB and spotted the Goodyear Blimp, based just a few miles away in Carson, approaching from the west. I sprinted towards the fence as the airship descended towards runway 26L and filmed it flying a low pass down the runway before it pulled into a dramatic max performance climb. In my years flying around Southern California, I’ve seen the Goodyear Blimp perform similar maneuvers at other local airports in the past so it must be something they do for practice in addition to looking extremely cool. The airship repeated the maneuver twice more throughout the day. I’ve filmed enough fast jets making low passes that I had to consciously remember to slow down my camera pan and be patient because it was moving so slowly!

The Goodyear Blimps of today are far higher-performance flying machines compared to their predecessors that were in service less than a decade ago. Three of these modern semi-rigid airships have replaced Goodyear's older fleet of non-rigid blimps over the last decade. They were designed and built by Goodyear and Germany's ZLT Zeppelin Luftschifftechnik, and are based in California, Ohio, and Florida.

These new airships are significantly longer than the blimps they replace—192-feet-long versus 246-feet-long. They feature advanced avionics, flight controls, and propulsion systems. They can make vertical takeoffs and landings via their thrust vectoring capabilities and are faster than their most recent processors by over a third. Seeing as they are primarily a marketing tool, persistence is key—they can be airborne for up to a whopping 48 hours, although normal missions usually last a fraction of that time. They can hit speeds of 73 MPH and fly as high as 10,000 feet.

Wired did a great two-part video series on these new airships that is really worth a watch:

So, there you have it. A Goodyear airship's maximum performance climb. Who knew it would be actually pretty damn impressive?!

As cruise missile and drone threats proliferate in the region, Israel is trying to succeed where the U.S. failed with its own radar blimp concept.

After years of flying exotic airships, the company plans to create massive orbital platforms and V-shaped airships that float slowly up to space.