The pod was used to collect data on multiple AIM-120 engagements during an exercise that spanned from California to Florida. 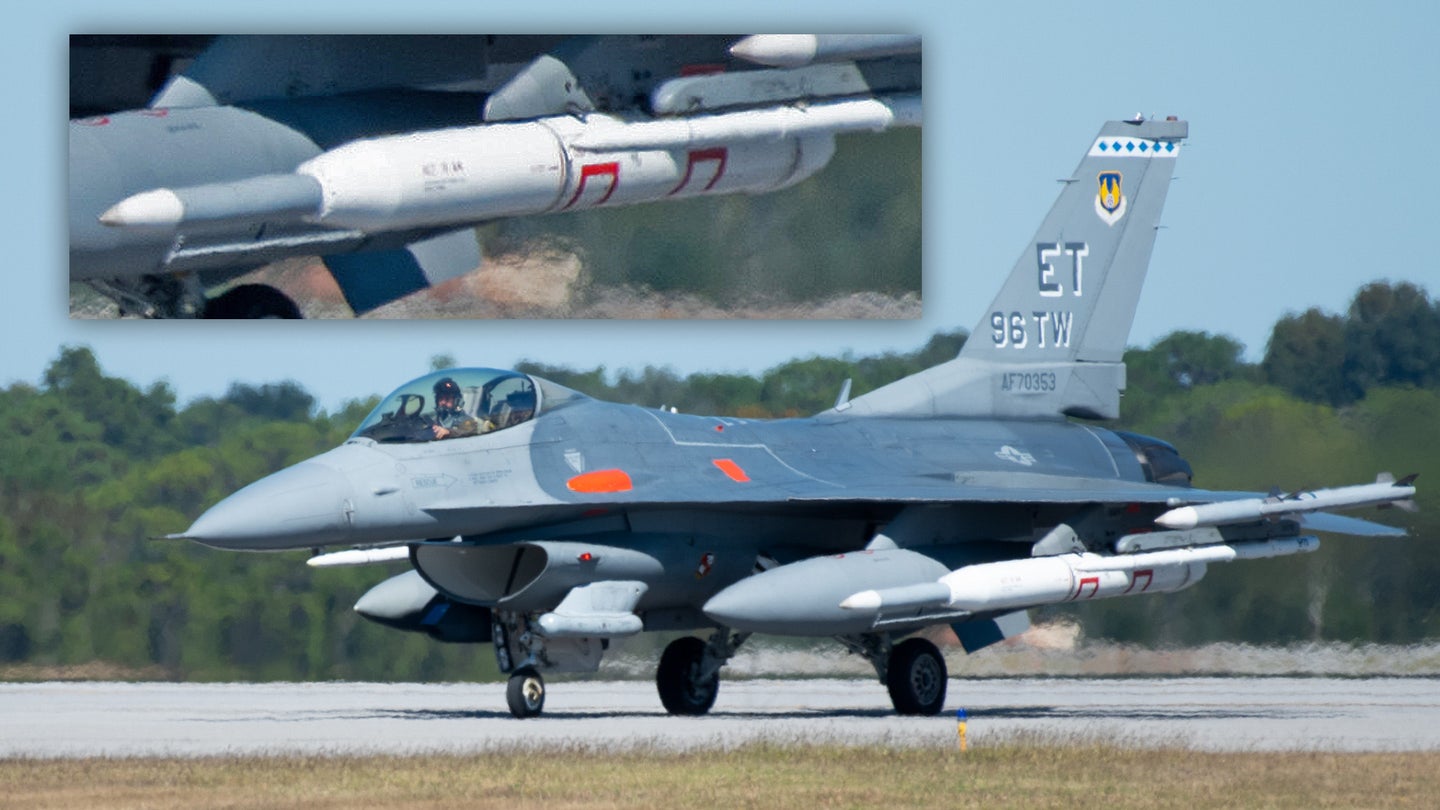 The U.S. Air Force has employed a little-known testing pod associated with the AIM-120 Advanced Medium-Range Air-to-Air Missile, or AMRAAM, during a recent large-force exercise. Images of an F-16C fighter jet carrying the AMRAAM Captive Equipment, or ACE, pod appeared after the latest Test Flag Enterprise, or TFE, which fuses together geographically separated drills using datalink networks. This relates to the Pentagon’s emerging Joint All-Domain Command and Control architecture, or JADC2, which aims to connect sensors from all U.S. military services into a single network.

The images showing the ACE pod were published by the Air Force together with details of the TFE, in which, for the first time, the Air Force combined three major exercises run in different locations, in real-time. The F-16 carrying the pod was seen at Eglin Air Force Base, Florida, on October 26 and was one of those assigned to the resident 96th Test Wing.

As for the pod, this essentially provides the aircraft carrying it with all the functions of the real missile, being interfaced with the jet in such a way that it’s treated as a live round, while the pod contains all the support equipment needed to monitor a simulated launch, including a datalink. Unlike a real AMRAAM, of course, the ACE pod’s combination of actual missile components and environmental conditioning equipment allows the pilot to simulate multiple launches — a significant benefit in a target-rich large-force exercise, or when various different launch parameters need to be assessed. Importantly, the pod's missile seeker also goes active (as it would for the terminal phase of the engagement), to demonstrate all performance parameters of the seeker. This is critical data to not only certify the capabilities of the missile, but to improve and upgrade it so that it performs better against countermeasures and under unique employment circumstances.

In the past, at least, the ACE pod was created by putting AMRAAM missile components into an adapted drop tank. Over time, this has morphed into more purpose-built configurations.

More details on how the ACE pod works are provided in a report on AMRAAM testing with the F/A-18 Hornet fighter from Naval Weapons Test Squadron Point Mugu, California, available from the Defense Technical Information Center (DTIC):

“After simulated launch, the ACE pod receives the datalink and, when in range of the target will activate its onboard transmitter and attempt to acquire the target. The ACE pod utilizes the same tactical software as an actual missile. All missile functions are captured and transmitted in real-time through secure telemetry channels. The post-flight analysis includes a detailed analysis of aircraft datalink, missile functioning and track file activity, and TSPI [time-space position information] comparison of actual versus system targeting information. ACE flight data is utilized post-flight to both help verify simulation validity and to improve the fidelity of the datalink database.”

What’s notable in the case of the recent TFE, which brought together Orange, Emerald, and Black Flag exercises via advanced networking, is that one of the areas of focus was long-range fighter kill chains — in other words, ensuring fighters are able to acquire and engage enemy air threats at long distances, via advanced networking. Clearly, the ACE pod would have a very useful role to play in these kinds of evaluations.

“Emerald Flag [EF] had very focused JADC2 objectives in 21-3 and accomplished crucial steps in completing end-to-end connectivity for long-range kill webs,” explained Captain Joe Haggberg, Emerald Flag deputy director, in a statement. “The EF team gleaned valuable information that will fundamentally transform the way we think, fight, and employ capabilities at further range. Emerald Flag is extremely resource-efficient in utilizing simulation methods that replace the need for many aircraft that is typical for a large event.”

While the three Flag events were held at the three geographically separated locations: the R-2508 complex in California (Orange Flag), the Nevada Test and Training Range (Black Flag), and the Eglin Gulf Test and Training Range (Emerald Flag), the last of these has particular relevance for missile-related trials. Here, the Gulf Range Complex provides over 130,000 square miles of training airspace, allowing both large-scale air combat training and sustained flying at supersonic speeds, as well as live missile shots, including against target drones. You can read more here about how the Air Force uses live missiles to assess how they would function in combat situations.

In March, Eglin hosted another AMRAAM-related test, this one involving a live missile, with what it described as “the longest known air-to-air missile shot to date.” While the actual distance was not disclosed, the service said the test “laid the groundwork for modernizing range capabilities in support of future long-range weapons testing on the Eglin-Gulf Test and Training Range.”

Notably, the same AMRAAM live-fire test was also described at the time as being in support of “long-range kill chain” capabilities.”

TFEs like this serve to test what systems and tactics work, and which don’t, and they gather an enormous amount of data to support these efforts. While the ACE pod was clearly only one aspect of what was being trialed over Florida and elsewhere, the information that these simulated AMRAAM shots will have gathered will be fed back to the operational forces to improve their lethality.

The Air Force has not provided many details of exactly what kinds of engagement scenarios were being put to the test at the Emerald Flag part of this TFE. But we do know that, as far as missile engagements are concerned, there is an increasing focus on extended range, new and more capable sensors, including powerful active electronically scanned array (AESA) radars and infrared search and track systems.

At the same time, aerial engagements are expected to involve broader collaboration with other assets under JADC2 and other similar initiatives, including using networked and third-party sensors to provide targeting data for engagements without the launching aircraft locking the target up themselves. This would seem to be inherent in the “kill chain” descriptions applied for the latest TFE as well as the very long-range AMRAAM shot.

The main driver behind this demand for longer-range and more lethal air-to-air missiles is fairly obvious: the developments in beyond-visual-range weapons made in China and Russia. Both those countries have fielded, or are very close to fielding air-to-air missiles that challenge the well-establish AMRAAM in terms of performance.

With that in mind, the United States is now looking beyond the AMRAAM and toward potential successors, including the AIM-260 Joint Advanced Tactical Missile (JATM). Then there is Boeing’s Long-Range Air-to-Air Missile, or LRAAM, a two-stage weapon that was unveiled in September.

In March, the Air Force confirmed it has “laid the groundwork for modernizing range capabilities in support of future long-range weapons testing on the Eglin-Gulf Test and Training Range.”

While the Pentagon hopes weapons like these will restore its long-range air-to-air missile lead, work continues to improve the capabilities of the AMRAAM, which remains in large-scale service and in production for domestic and export use. Recent upgrades have included the introduction of the latest AIM-120D-3 version, introducing improved hardware in the guidance section.

Exactly how the use of the ACE pod during the TFE’s Emerald Flag component was related to these ambitions is unclear. But with new missiles optimized for beyond-visual-range engagements in the works, missile test simulations of this kind are only likely to be more common in the future.