A new carbon transformation process could be game-changing for the Air Force, which spends billions annually to buy fuel and ship it around the world. 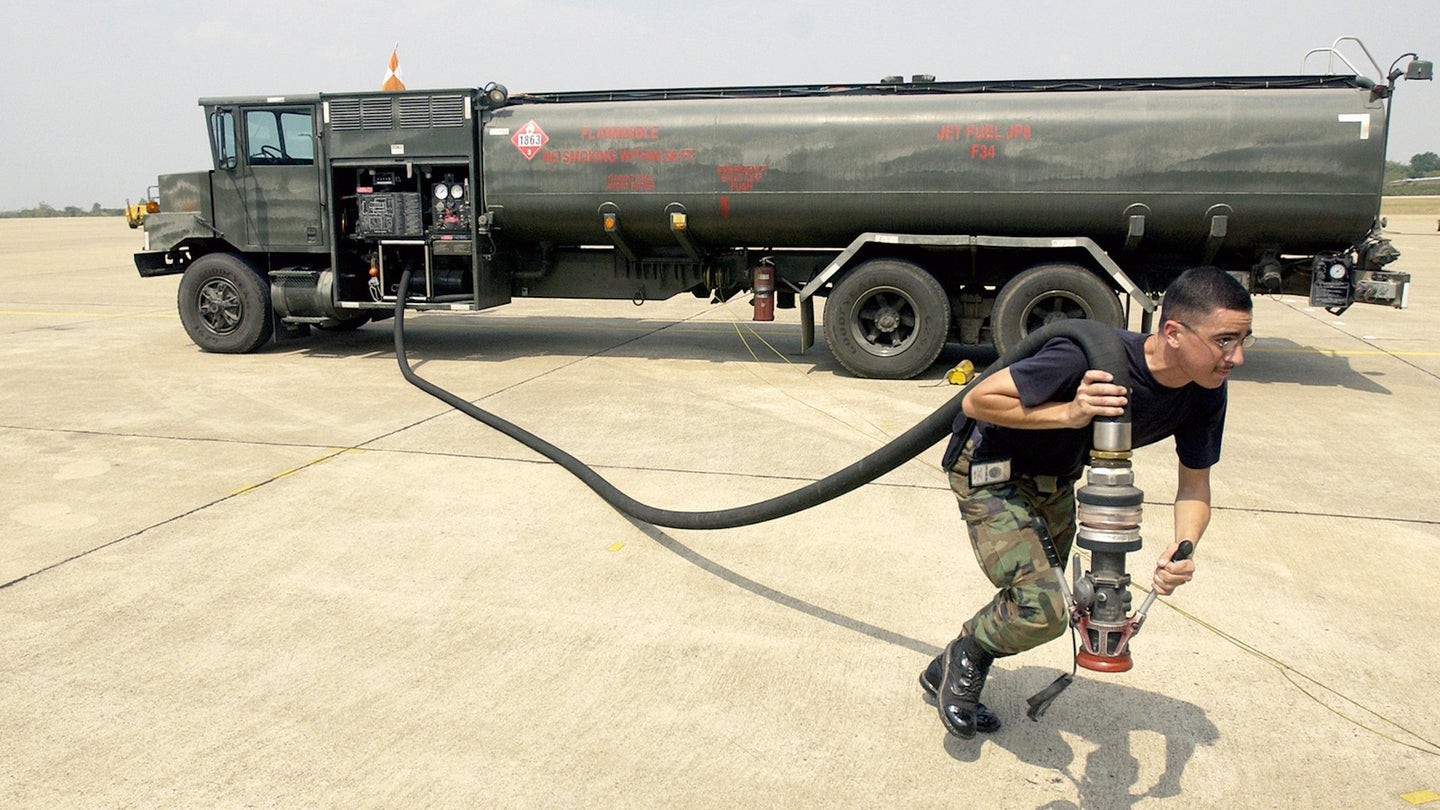 Every year, the U.S. Air Force buys billions of gallons of jet fuel at a cost of billions of dollars. It spends billions more to get it where it needs to go, including directly into aircraft on combat missions via aerial refueling tankers. Now, the service says that it has made significant progress in the development of a chemical process that could allow it to create the fuel it needs right out of the air, reducing its logistical burdens and environmental impacts.

The Air Force Operational Energy office announced today that energy company Twelve, which has been working with the service on this technology, was able to produce viable jet fuel, known as E-Jet, from carbon dioxide in an experiment in August. The Air Force believes that Twelve's current process, which also involves water and power from renewable energy sources, has the potential to be "highly deployable and scalable, enabling the warfighter to access synthetic fuel from anywhere in the world."

"History has taught us that our logistics supply chains are one of the first things the enemy attacks," Roberto Guerrero, Deputy Assistant Secretary of the Air Force for Operational Energy, said in a statement. "As peer-adversaries pose more and more of a threat, what we do to reduce our fuel and logistics demand will be critical to avoid risk and win any potential war."

“With carbon transformation, we are untethering aviation from petroleum supply chains," Nicholas Flanders, Co-Founder and CEO of Twelve, added in his own statement. "The Air Force has been a strong partner in our work to advance innovative new sources of aviation fuel."

The underlying science behind Twelve's carbon transformation process is not new. In the 1920s, German scientists Franz Fischer and Hans Tropsch invented what became known as Fischer-Tropsch (FT) synthesis. This process has been improved upon since then and remains in use today, including to produce fuels for the U.S. military.

"Fischer-Tropsch certified synthetic fuels are approved as a ‘drop-in’ fuel for each specific aircraft, first commercially, and then by the U.S. military and the aircraft’s associated system program office," according to the Air Force. "The highest blend currently certified is a 50/50 blend of FT synthetic fuel and petroleum fuel."

However, "most synthetic fuels, which are created by a mix of carbon monoxide and hydrogen known as syngas, are produced through burning biomass, coal, or natural gas," the Air Force notes, meaning that fossil fuels are still required. "Twelve’s technology eliminates the need for fossil fuels, producing syngas by recycling CO2 captured from the air and – using only water and renewable power as inputs – transforming the CO2."

The benefits of a potentially simpler, carbon-neutral synthetic fuel manufacturing process could be enormous from a cost perspective, as well as an environmental one. Even a slight reduction in the cost per gallon of fuel could generate significant savings for the Air Force.

In a 2019 op-ed for Defense News, Deputy Assistant Secretary Guerrero highlighted how the Air Force flies regularly flies around 800,000 sorties annually and burns some two billion gallons of aviation fuel in the process. The exact amount of fuel the service uses and how much it spends to buy what it needs every year fluctuate due to changes in operational requirements.

However, it is always a multi-billion dollar expenditure. In its budget request for the 2022 Fiscal Year, the Air Force included nearly $8.2 billion for fuels of all kinds, which could include aviation gas, as well as other things like gasoline and diesel for ground vehicles. If the service could trim just five cents off the cost of every one of the two billion gallons of aviation fuel it buys every year, that would equate to a savings of $100 million.

It's not just the cost of the fuel itself that's at issue, though. The Air Force also has to pay to get it to units that need it, including in warzones. Beyond how much it can cost to push fuel to forward-deployed elements, there can also be significant risks incurred in doing so.

"The Air Force must use a combination of trucks, aircraft, and ships to ensure fuel is delivered to meet warfighter demand. However, many areas of operation cannot always easily reach traditional access points of the supply chain, particularly during conflict," according to the Air Force. "At the height of the war in Afghanistan, attacks on fuel and water convoys accounted for more than 30% of casualties."

The Air Force says that the infrastructure associated with Twelve's carbon transformation process is not only potentially viable for the production of synthetic fuel at scale, but that it might be possible to craft a version of the system that is readily deployable. This, in turn, could reduce the need to physically deliver large amounts of fuel to units in the field, cutting costs in the logistics chain, as well.

If Twelve's carbon transformation technology is as capable and scalable as the Air Force clearly hopes it is, it could be game-changing for the service. One would imagine that the rest of the U.S. military would be similarly interested in the process, especially if it could produce a wide variety of fuels. Twelve sees an obvious potential commercial market for E-Jet fuel, as well.

Fuel demands across the U.S. military are only increasing, as are the potential dangers to the platforms used to bring it closer to the front lines. The risks to supply chains would only be magnified during higher-end conflicts, especially against near-peer adversaries, such as China or Russia. The Air Force, along with its sister services, are well aware of these realities and are in the process of exploring various potential options to provide battlefield power in the future, from hydrogen fuel cells to small mobile nuclear reactors to even just sending it via a microwave beam from one point to another.

The Air Force has already acknowledged some potential pitfalls in the carbon transformation concept that will still need to be overcome. The biggest of these will be supplying the power necessary to run the fuel production process, especially in a battlefield context. Since Twelve's process also demands a ready supply of water, which will be another critical resource in future conflicts.

Twelve has pointed to the idea of being able to extract water from the air, as well, which would eliminate the need to supply that separately. Pulling water out of the air has also been suggested as a possible way to provide water for drinking and other purposes in remote and austere environments, including during combat operations. This, of course, could be a difficult proposition in environments where the amount of ambient water in the air is limited.

In addition, while this concept would help reduce the Air Force's reliance on fossil fuels, the synthetic products from Twelve's process are still hydrocarbon fuels, though the company says they are very clean-burning. Carbon emissions continue to be a factor in global climate change, an issue that is also of growing concern to the U.S. military, as well as the rest of the U.S. government.

"Exacerbated by climate change, extreme weather events are increasingly damaging infrastructure, disrupting supply chains, impacting force readiness and operations, and contributing to humanitarian crises and instability across the globe," Secretary of Defense Lloyd Austin said in a statement yesterday accompanying a new Pentagon report on the security implications of global climate change. "Climate change is also shaping our strategic interests. Competitive advantage in the future will go to those who can fight and win in this rapidly changing strategic and physical environment. "

Still, with the potential to save the service hundreds of millions of dollars and ease ever-growing logistic concerns, it is not surprising that the Air Force is very interested to see if this technology can be made to work as advertised. The first phase of this project is set to end in December, after which the plan is to begin actively working on scaling the process up to demonstrate its ability to make significant quantities of fuel.

It will be very interesting to see where Twelve, in cooperation with the Air Force, takes this project next.

This Alaskan Air Base Will Host An Experimental Mini Nuclear Reactor