The Advanced Tactical Trainer would likely also be expected to fly aggressor missions as part of a major overhaul of Air Force training. 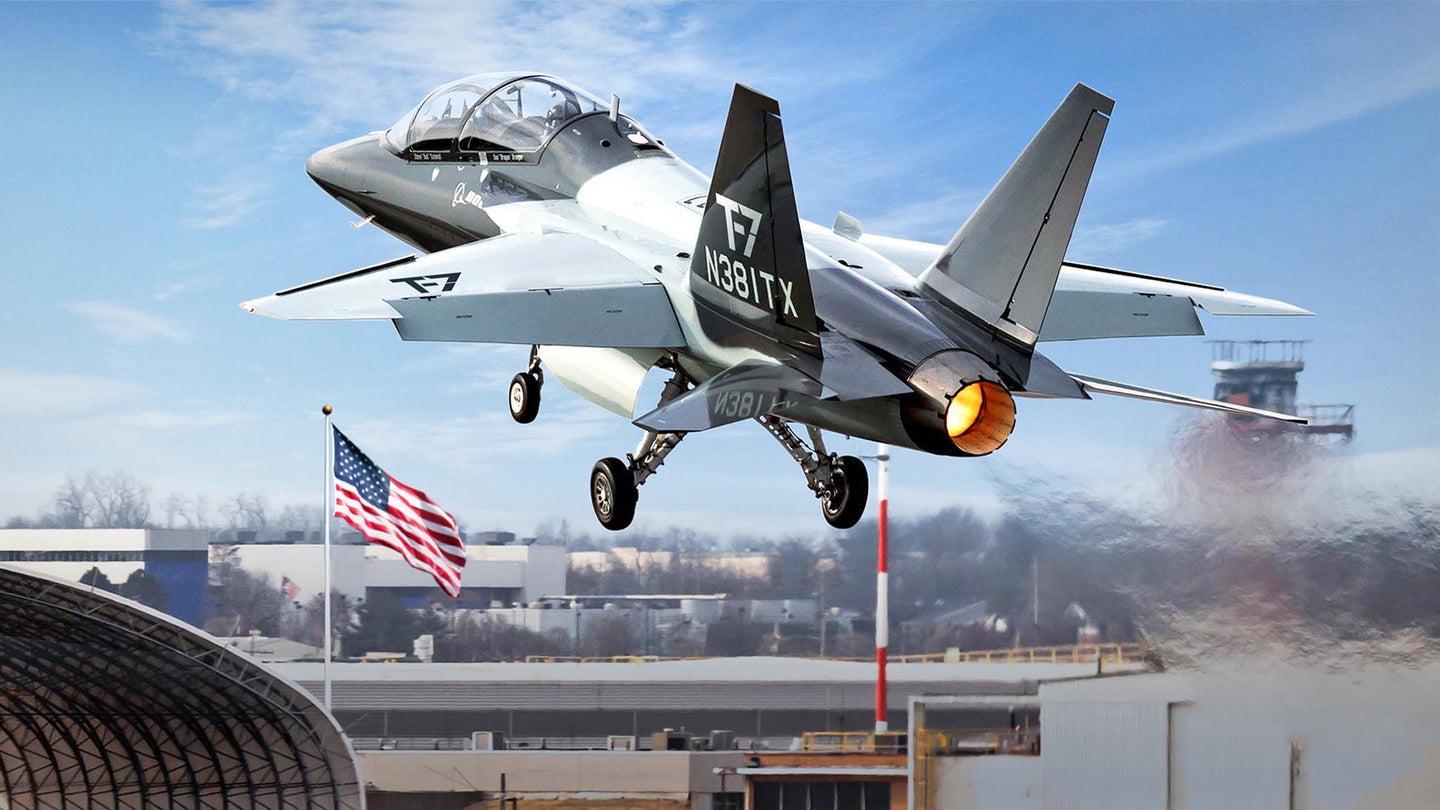 The U.S. Air Force is looking to add at least 100, and possibly hundreds more, Advanced Tactical Trainers on top of the 351 T-7A Red Hawks that it’s already ordered under the T-X program. The additional aircraft might also be Red Hawks, but the service has said it will look at any potential contenders that fit its requirement.

The Request for Information (RFI) for the Advanced Tactical Trainer was released by the Air Force on October 12, as part of a wider effort to revamp Air Force fighter training. However, the new jets would likely not only be used for schooling pilots, but also as aggressor aircraft as an extension to the Adversary Air program, and as “tactical surrogates,” allowing more operational-level training to be transferred from costly fighters onto a cheaper platform.

The latest details of the planned Advanced Tactical Trainer procurement confirm that the jet trainers are intended to support the Reforge initiative, an entirely new training concept that Air Combat Command (ACC) revealed last year, which you can read much more about here.

“The platform desired is one that will meet the Initial Tactical Training platform requirements within the Reforge [concept of operations],” an ACC spokesperson told Air Force Magazine.

The idea behind the tactical surrogate is to have a lower-cost training platform equipped with a cockpit that’s representative of an advanced frontline fighter jet, such as the F-35. It’s driven by the fact that the current T-7A program of record, covering 351 aircraft, is judged insufficient to meet all future jet training needs as envisaged under Reforge.

The Advanced Tactical Trainer would likely emerge with a very different set of capabilities compared to the T-7A's. The Air Force is eyeing external hardpoints for the carriage of training weapons, electronic warfare pods, air combat maneuvering instrumentation pods, and fuel tanks. A compact radar might be another option for the jet, and the RFI also specifically mentions that consideration is being given to installing an infrared search and track (IRST) sensor.

The Air Force hasn’t yet laid out a timeline for acquiring the additional jet trainers, nor has it yet established how many aircraft would be required. However, the RFI outlined a need for 100 new Advanced Tactical Trainers, with the potential for this to grow via subsequent lots of 50 aircraft. In its initial reporting, Air Force Magazine said the Air Force may end up buying 400 Advanced Tactical Trainers, although this had been reduced to 200 in its follow-up story. More details of numbers and timeline are expected once the Air Force has received responses to the RFI.

As for the position of the T-7A with regard to the Advanced Tactical Trainer program, the Air Force has made clear it is “not limiting the aperture to any one platform,” and the ACC spokesperson told Air Force Magazine the service will consider “any and all vendors that can meet the desired design.”

That said, Boeing and Saab, who co-developed the T-7A, have previously suggested that the platform would lend itself to adaption for an aggressor role, something The War Zone has discussed in more detail in the past. Furthermore, the same airframe could lend itself well to the operational training tasks of the kind that would be flown by a tactical surrogate type. ACC has even discussed the possibility of a more fighter-jet-representative derivative of the Red Hawk, unofficially referred to as the F/T-7X.

Deliveries of the basic T-7A were scheduled to begin in 2023, with the Red Hawk planned to reach initial operational capability with Air Education and Training Command the following year. There have, however, been some problems with the program, including a “wing rock” issue that Boeing recently reported was resolved with a software fix, plus production delays due to COVID-19-related parts shortages. As a result, the Milestone C full-rate production decision for the T-7 has now been postponed to fiscal year 2023.

The T-50A that Lockheed Martin and Korea Aerospace Industries unsuccessfully offered for the T-X program has also previously been earmarked as a potential candidate to at least evaluate elements of the Reforge concept. In the past, the Air Force has looked at leasing between four and eight T-50s under what is known as the RFX program, a proof-of-concept experiment supporting Reforge. It’s not clear if the current RFI has led to a revision of this idea.

Unlike the T-7A, the T-50 currently exists in a production-presentative form, meaning it would be available for a Reforge demonstration almost immediately if required. The same goes for the Leonardo M-346, which was also pitched for both T-X, as you can read about here, and for RFX. Either way, although ACC had said last year it would finalize the lease deal, so far this has not happened, leaving the status of RFX unclear.

While the selection of the T-7A for the T-X requirement in late 2018 represented the most significant development in Air Force training for many years, Reforge could potentially be even more far-reaching.

The Reforge concept was unveiled in early 2019 by U.S. Air Force General Mike Holmes, the boss of ACC, who called for the modernization of a training enterprise that was still based on principles essentially developed to support the demands of World War II.

“Pilot training in the 1930s lasted 12 months — and, despite the proliferation of GPS, glass cockpits, autopilots, and digitally aided flight controls — it still lasts 12 months today,” Holmes wrote in a piece for War On The Rocks.

At this point, pilots now move on to the Introduction to Fighter Fundamentals (IFF) course, run by a Formal Training Unit (FTU) and providing the experience of the particular frontline fighter jet they are destined to fly.

Holmes’ Reforge plan would radically overhaul this fairly complex process, with future fighter pilots heading straight to their future operational fighter squadron after completing the first two phases of UPT. Once at their frontline unit they would continue to fly the T-7A (or the new Advanced Tactical Trainer type) before transitioning to their assigned combat aircraft at the same location.

The hope is that the revised system will speed up the process of getting newly trained pilots into frontline cockpits, with fewer moves between different bases. Simplified training systems should also help make the fighter pilot career more attractive, at a time when the Air Force is experiencing a significant aircrew shortfall. At the same time, the training demands currently placed on frontline fighters would be reduced.

At the same time, having schoolhouse units with advanced training jets co-located at operational fighter bases would potentially allow the trainers to undertake aggressor missions, too. All these types of missions would be supported by the same kinds of synthetic training aids, including simulators, that are already in the works for the T-7.

What’s more, having a new Advanced Tactical Trainer available could help increase the number of actual flight hours that fledgling aviators receive. In recent months, there have been concerns that a reduction in flying hours coupled with an increasing reliance on simulators has led to a surge in mishaps.

“Students receive less total flight experience in their initial flight screening, in UPT, and IFF, with increased emphasis on virtual training and efficiency on the horizon,” one USAF fighter pilot told The

War Zone last year. “While FTUs and undergraduate training programs can get student pilots up to par for a few flights in each phase [enough for them to progress along the timeline], the lack of experience is beginning to show in basic flight discipline.”

With all this in mind, it becomes clearer where the proposed Advanced Tactical Trainer would fit.

While the T-7A, initially at least, is being procured as a direct replacement for the T-38 and is tailored for the LIFT portion of the syllabus, the Advanced Tactical Trainer would feature more ‘operational’ capabilities, making it a more appropriate stepping-stone to a frontline type. Potentially it would also be suitable for continuation training, too, reducing the demand on costly fifth-generation types, which are extremely expensive to fly and maintain. Having advanced trainers embedded with these units would help reduce costs and save airframe hours with everything from basic tactics training to pilot proficiency. This is a particular concern for those units that currently fly T-38s to help pilots of advanced stealth fighters, as well the B-2A Spirit stealth bomber and U-2S Dragon Lady spy plane, to maintain basic flight proficiency and build flight hours.

Were the Air Force to acquire as many as 200 Advanced Tactical Trainers, it could potentially also fulfill a significant portion of its red air requirement. The Air Force has hired seven different contractors to provide red air support at bases across the country, but, with the discussion about red air capacity still ongoing, this could eventually be supplemented or even superseded by in-house aggressors. Currently, the Air Force has a small cadre of just two aggressor squadrons, plus T-38s already providing aggressor roles for the F-22s of the 1st Fighter Wing. Ultimately, it’s possible the Advanced Tactical Trainers could be switched between schoolhouse and aggressor missions as required, providing another saving in terms of resources. Long-term, they may also well end up being used in conjunction with new unmanned red air platforms, an area of interest that is fast gaining traction.

It should also be remembered that the Air Force is in the process of completing a study regarding the optimum mix of its tactical fleets, in general, a subject we have also discussed in the past. Reforge is set to play heavily into this, since it aims to rearrange how pilots train before getting to units and how those squadrons continue to do certain kinds of training after they arrive. That means the importance of the Advanced Tactical Trainer will likely be felt across the entire Air Force fighter enterprise.

So, while it’s not exactly clear when we might see a new Advanced Tactical Trainer (or a reworked T-7) on an Air Force ramp, it is clear there is a growing demand for such an aircraft to fulfill a variety of roles.

General Wills faces a pilot shortage while saddled with a training system that’s stayed largely the same for 60 years. Here’s how it could change.