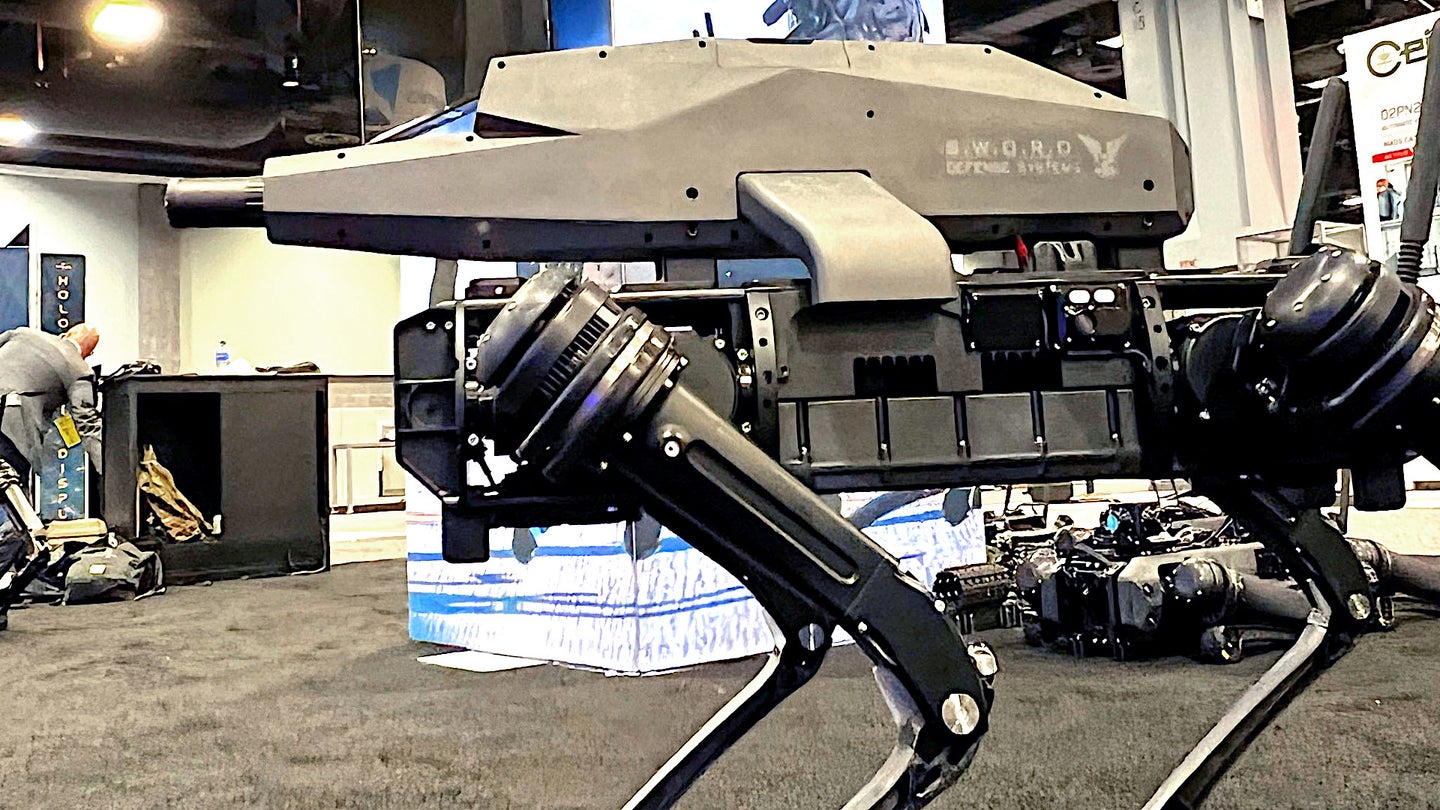 Ghost Robotics and SWORD International have teamed up to create a rifle-toting "robot dog." Called the Special Purpose Unmanned Rifle, or SPUR, the system adds a 6.5mm Creedmoor rifle from SWORD to one of Ghost Robotics' quadrupedal unmanned ground vehicles, or Q-UGVs.

The SPUR made its debut on the show floor at the Association of the U.S. Army's (AUSA) main annual convention in Washington, D.C., which opened yesterday. Though Ghost Robotics is partnered with a number of other companies to explore defense and security applications, among others, for its Q-UGVs — which you can read more about in this past War Zone feature — this appears to be the first example of one of these unmanned systems with an actual weapon mounted on it. Unarmed examples of the Q-UGV are notably already in limited use with the U.S. Air Force's 325th Security Forces Squadron at Tyndall Air Force Base in Florida and are being tested by other units within that service.

The exact configuration of the 6.5mm gun inside the SPUR module — how much ammunition it contains, and how hard it might be to reload — are all unclear. A product card for SPUR that emerged during the AUSA show can be instructed remotely to chamber the first round from an unloaded state, as well as clear the chamber and safe the gun.

In terms of the weapon itself, SWORD does offer derivatives of the 5.56x45mm AR-15/M16 family, as well as similar, but larger caliber guns, more akin to the Armalite AR-10 or Knights Armament Company SR-25. Those rifles come in calibers such as 7.62x51mm, 6.5mm Creedmoor, .300 Norma Magnum, .338 Lapua Magnum, and .338 Norma Magnum. The weapon used in the SPUR module looks like it could have a sound suppressor fitted to the front end, which could make it more difficult for opponents to determine where the shooting might be coming from.

The 6.5mm Creedmoor is not currently in any kind of widespread use by the military or other security forces, either in the United States or elsewhere around the world. However, U.S. Special Operations Command is notably in the process of acquiring light machine guns and rifles in this caliber, ostensibly to fill an intermediate niche in overall performance between existing 5.56x45mm and 7.62x51mm guns, as you can read more about here. Testing has shown that this 6.5mm round actually offers increased range over the various 7.62x51mm cartridges that are available to the U.S. special operations community now.

There is limited information about the SPUR available now, but The War Zone has already reached out to Ghost Robotics for more details. The SPUR product card said it is capable of precision fire out to 1,200 meters, or nearly 3,940 feet. This unmanned system already features impressive stabilization capabilities simply as a result of its quadrupedal design.

"When our robots move around and you shove them, these forces are computed at 2,000 calculations per second per leg," Ghost Robotics CEO and founder Jiren Parikh told The War Zone's Brett Tingley in an interview last year, adding that the system is designed in such a way as to work to ensure it can keep functioning even if various onboard sensors it can use to help move around fail.

"We’re adjusting it to make it like a mammal. Our robot, when you see it climbing stairs or walking or running around, we turn off all the sensors," he continued. "It’s just feeling. It’s completely blind. The reason we do that is because if a warfighter or a mining company, if anybody is using our robot, this robot had better operate 99.99% of the time."

As for targeting, the SPUR module appears to have its own sighting system on top. In past testing the U.S. Air Force has conducted using unarmed Q-UGVs, operators have utilized the Android Team Awareness Kit (ATAK), an app that can be installed on tablet-like devices, to interact with these unmanned systems and view the feeds from their onboard video cameras. It seems likely that ATAK or a similar piece of software could be used to enable a human to aim at targets and engage with them with the robot's 6.5mm rifle. The Air Force has also discussed potentially operating Q-UGVs remotely from centralized command facilities via virtual reality headsets.

Though neither Ghost Robotics nor SWORD have said such capabilities are in the works now, SPUR could also have some degree of additional autonomy, in the future, potentially employing artificial intelligence-driven capabilities to at least detect and "lock on" to potential threats, even if an operator ultimately has to give the approval to start shooting. Sighting systems for small arms that offer these kinds of capabilities are available on the open market now.

Regardless, giving the Q-UGV a weapon of its own offers a way for it to immediately prosecute any targets it might come across, if desired. This could be especially valuable given the idea that these "robot dogs," just like their real counterparts, will be able to get into tight spaces that present significant risks for their human "handlers," or just be hard for a person to access all. A 6.5mm Creedmoor gun would give it the option of engaging threats at more extended ranges, as well. This could be highly advantageous for perimeter security tasks, which is already one of its key missions, at least in expeditionary scenarios, as well as for scouting and urban warfare military operations.

“These dogs will be an extra set of eyes and ears while computing large amounts of data at strategic locations throughout Tyndall Air Force Base,” Air Force Major Jordan Criss, the head of the 325th Security Forces Squadron, said in a statement after a test involving the Q-UGVs last year. “They will be a huge enhancement for our defenders and allow flexibility in the posting and response of our personnel.”

The option now of arming the Q-UGVs adds a new tier of capability to these unmanned systems that could increase their flexibility when employed in various roles. At the same time, the idea of arming quadrupedal unmanned systems, which already prompt very different kinds of reactions compared to more traditional unmanned ground vehicles, may sit unfavorably with some. Those types of responses may well increase just as Ghost Robotics' product line, including unarmed types, becomes increasingly more autonomous.

At the same time, small armed unmanned ground systems are hardly new, and the military utility of adding weapon systems to quadrupedal designs is obvious.

Ghost Robotics has now followed up with The War Zone about SPUR and has clarified that it did not provide the product card regarding the system's capabilities that had emerged during the AUSA show this week. In addition, Ghost Robotics has stressed that, in its present form, with regards to employing the weapon, SPUR is entirely operator-controlled and does not have any autonomous capabilities.