The 'suicide drones' will allow Marine light armored units to surveil the battlefield and strike targets with pinpoint precision from up above. 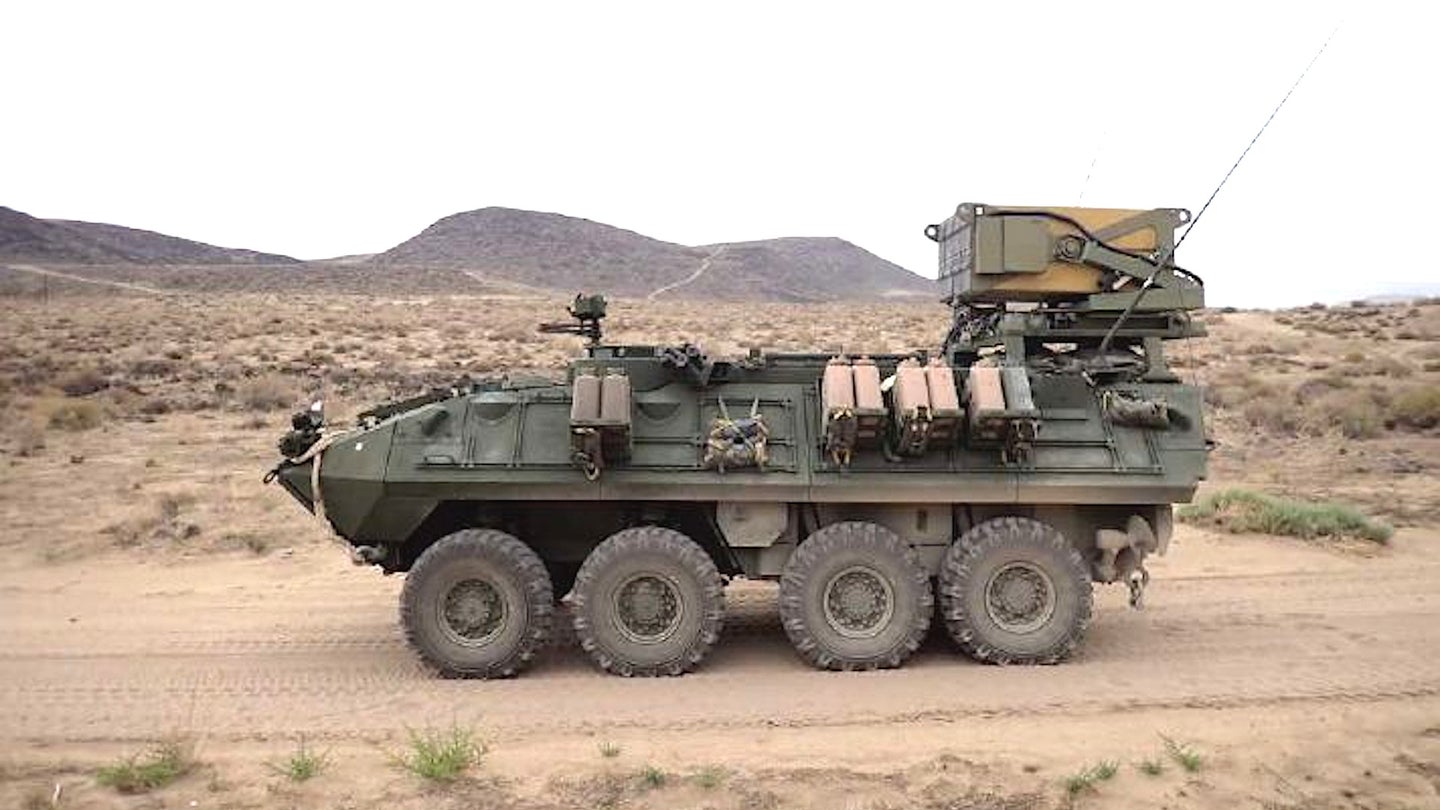 Israeli firm UVision has shown off the first pictures of a U.S. Marine Corps 8x8 LAV-25-series wheeled armored vehicle with a multi-round launcher for loitering munitions, which are often described as "suicide drones." The company had announced earlier this year that the Marines had selected this launch system, together with a variant of the Hero-120 loitering munition, as the winning entry for its Organic Precision Fires-Mounted program.

UVision released the photographs of the modified LAV-M, which is the mortar carrier variant of the LAV-25, as part of its official unveiling of the Multi-Canister Launcher (MCL) at the Association of the U.S. Army's main annual conference in Washington, D.C., which opened today. A lower resolution image of the MCL by itself on the ground during a live-fire test had previously emerged.

“UVision was recently awarded a contract to supply the Hero-120 aerial loitering munition and multi-canister launchers to the United States Marine Corps for its 'Organic Precision Fire Mounted' (OPF-M) program,” Jim Truxel, CEO of UVision USA, UVision's American subsidiary, said in a statement. “As part of this project, the MCLs will be installed on various platforms. We are proud that this latest development will be used in the field soon.”

Though the Marines have selected a service-specific variant of the Hero-120, UVision says the eight-cell MCL is capable of launching any version of that loitering munition, as well as other members of the Hero series, such as the Hero-30 and Hero-400EC. All these weapons are fired from the MCL via preloaded launch canisters, making it easier to load the desired types based on the situation or reload the entire launcher.

"Giving field forces operational flexibility, the innovative capability enables them to choose and launch the most suitable system, depending on the nature of the mission and target — from the Hero-30 for smaller 'surgical' attacks, through the Hero-120 for medium-sized and armored targets, up to the Hero-400 for long-range and fortified targets," according to UVision.

The Hero-120 has a warhead weighing just under 10 pounds and a maximum range of just under 25 miles using a line-of-sight datalink. It can remain aloft for up to 60 minutes. It is not clear how the Marine Corps' Hero-120 OPF variant differs from the standard type. Earlier this year, UVision did say that it had developed a new multipurpose warhead with improved antitank capabilities for the Hero-120, as well as the Hero-400EC.

The smaller Hero-30, which has around 30 minutes of endurance and a warhead weighing just over 1 pound, and the larger Hero-400EC, with its nearly 90 pound warhead and 120 minutes of flying time, can both be configured with the same datalink, giving them the same maximum range. UVision says that Hero-400EC can also be configured in a way that extends its effective range out to 93 miles.

All three loitering munitions, as well as other types in the Hero family, have nose-mounted TV and infrared video cameras that allow the operator to see what the munitions "see" throughout their entire flight. It is that camera capability that separates loitering munitions, such as the Hero types, from more traditional missiles. It allows them to operate as small surveillance and reconnaissance drones and then strike any targets their find directly. UVision's designs can also be recovered and refurbished for reuse if they complete a mission without conducting a strike.

The operator-in-the-loop nature of most loitering munitions, a technology that Israeli companies pioneered and continue to lead in the further development of, allows the user the make very fine course corrections in flight, further improving the weapon's accuracy. It also provides an added margin of safety, since the operator can direct the munition away from the target area, if necessary, even very late in the terminal stage of a strike, should circumstances change, such as the sudden appearance of innocent bystanders. The onboard navigation systems on the Hero series mean they can be used to strike fixed targets at specific coordinates, beyond-line-of-sight, as well.

The Marine Corps sees loitering munitions, among other new weapon systems, as essential to enabling the new distributed and expeditionary concepts of operations the service is in the process of refining. These concepts, broadly referred to as expeditionary advanced base operations (EABO), are at the core of how the Marines expect to fight in the future, including in high-end conflicts against near-peer opponents such as Russia or China. This is also driving a dramatic force-wide restructuring that you can read more about here.

A weapon such as the Hero-120 certainly offers a new way for even relatively small Marine ground units to conduct precision strikes at extended ranges, while also expanding their overall situational awareness. It gives those same units this kind of capability in the absence of more traditional air or artillery strikes, as well. This could be extremely valuable in distributed operations across a broad front, such as in the Indo-Pacific region, where other types of indirect fire support may not be readily available.

The Marines are also planning on mounting MCLs loaded with Hero-120 OPFs on small unmanned boats, which would be capable of launching swarming attacks on enemy ships, as well as land-based threats near to the shore. The service has implied that its versions of the Hero-120 may have the ability to operate in networked swarms themselves. In a maritime context, while loitering munitions such as the Hero-120 would not be large enough to sink enemy warships or even smaller boats such as landing craft, they could be used to cause a mission kill by damaging key systems, such as radars or communication antennas. This, in turn, could effectively put those vessels out of commission for an extended period while repairs are made. Targeting the bridge on patrol boats, landing craft, or similarly sized vessels might be enough to take them out of the immediate fight, as well.

“These swarming aerial munitions, which employ automatic target recognition, have proven exceptionally lethal in recent global conflicts, most recently in Europe,” General David Berger, Commandant of the Marine Corps, told members of Congress in June. “Our own tests have also demonstrated this technology to be effective, with five of five successful shots during testing. We plan to equip our infantry and reconnaissance Marines with this loitering capability, mounting those munitions on both ground vehicles and long-range unmanned surface vessels."

Berger was almost certainly referring to Azerbaijan's heavy use of Israeli-made loitering munitions during its conflict with Armenia last year, which catapulted this category of weapons into the mainstream discourse like never before. That, in turn, has only prompted additional interest in these weapons and the capabilities they offer within the U.S. military, as a whole.

Previous reports have indicated that there is already another Hero-120 variant, the Hero-120SF, specifically designed for U.S. special operations forces. In March, Northrop Grumman announced it was working with UVision on an air-launched hybrid Hero-120/Hero-400 design to meet U.S. Army requirements.

UVision is planning to conduct a demonstration of at least some portion of its product line at the Army's Dugway Proving Ground in Utah sometime this month, with representatives from the U.S. Air Force, Navy, Marine Corps, and Special Operations Command (SOCOM) also in attendance. The new MCL could certainly be of interest to the Army and Navy, as well as SOCOM, for ground-based and maritime applications. The Air Force might be interested in variants of Hero for air-launched use, too, having already demonstrated something of a similar capability in a test involving the launch of an ALTIUS 600 small drone from the internal bay of a larger XQ-58A Valkyrie unmanned aircraft.

As already noted, UVision's Hero series is already making significant inroads across the U.S. military and is part of a future that is getting ever closer, in which American forces will increasingly be armed with various tiers of loitering munitions.