Have You Ever Seen An AV-8B Harrier Use The Meatball To Land On An Amphibious Assault Ship?

This awesome video shows how Marine vertical landing jets use a Fresnel Lens Optical Landing System like their supercarrier-based counterparts. 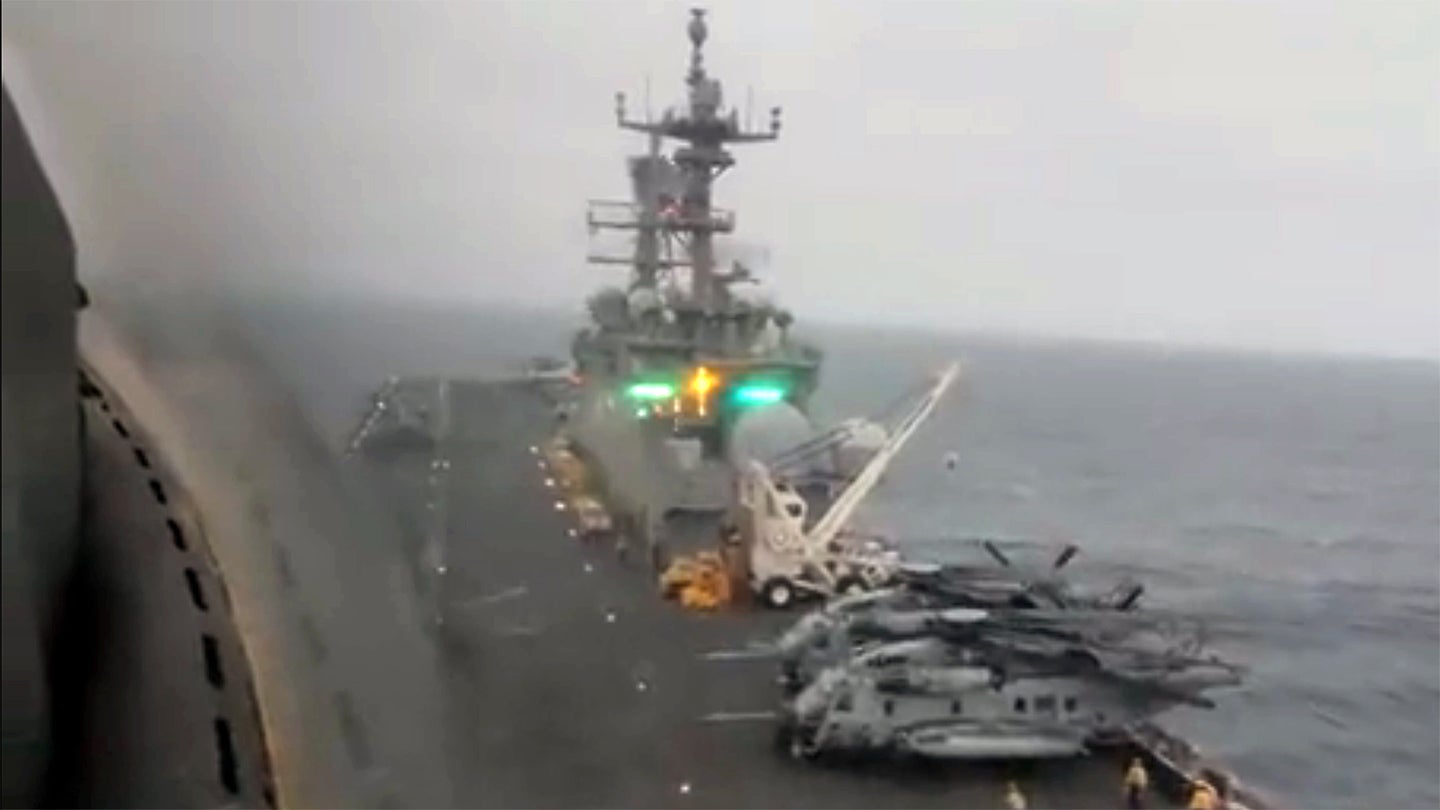 When you think of carrier landings, a few essentials probably come to mind—hook, wire, and the "Meatball," known by its full name as the Improved Fresnel Lens Optical Landing System, or IFLOS. While the Meatball is known to be a critical component for fixed-wing pilots landing on catapult and arresting gear-equipped (CATOBAR) carriers, it's less known that America's 'big deck' amphibious assault ships (LHDs and LHAs) are also equipped with the system. Thanks to one Harrier pilot that goes by the handle @overdesigned on Twitter, we get to see the system in action right from the cockpit of his AV-8B Harrier.

One major difference between the Meatball on America's nuclear-powered supercarriers and those on big deck amphibious assault ships is where it is mounted. Instead of being installed on the port side amidships at deck height, it is mounted on the island superstructure, on the ship's starboard side, high above the deck. As you can see in @overdesigned's video below, he flies the meatball straight in, over the fantail of the ship, before entering into a solid hover and eventually touching down vertically amidships:

In addition to seeing the Meatball in action, the straight-in approach isn't something we see much of when it comes to Harrier ops aboard amphibious assault ships. So, with all this in mind, we reached out to the guy at the controls to get more info on this approach, the Harrier's use of the IFLOS, and more.

Here is our exchange:

Does the Harrier use the IFLOS in the same way that the CATOBAR jets do on CVNs?

Generally speaking yes, in that it gives us visual glideslope from a mile or so out in towards the ship. We transition to a different set of lights once we're in close though, whereas CVN pilots fly the ball all the way to touchdown.

When are straight-in landings used instead of the typical ones where the Harrier hovers to the left of the ship, then walks to the right over the deck in a hover before landing?

When we do night landings but aren't on NVDs [Night Vision Devices], we fly straight up the stern. "Night" is defined as "after sunset" so sometimes you get a pretty bright night landing.

Do you "call the ball"—where the pilot acknowledges visual contact with the Meatball at 3/4 mile from the ship and their fuel state—like fixed-wing aircraft operating aboard supercarriers do? Are the radio communications similar in general?

For approaches where we use the ball, yep the ball call is the same. There are a couple of extra calls related to the vertical landing that occur after the ball call. For a normal daytime good weather recovery, we just call abeam, no ball call. And then similar to how a CVN LSO [Landing Signal Officer] provides guidance, the V/STOL [Vertical/Short Take-Off and Landing] LSO does the same, but again with some specialized terminology related to the hover and vertical landing.

Can the F-35B do the same straight-in landings?

I am sure they are technically capable, but I couldn't tell you if it's a thing they do or don't do since I haven't really talked or done anything with any F-35 guys.

What are the most challenging things about lower visibility landings on "amphibs" with the Harrier?

Things are difficult with a rolling ship, particularly at night on NVDs, without a well-defined horizon. If you attempt to match the ship's roll with your aircraft you start to slide laterally, so you have to watch the tramline [centerline of the takeoff and landing area] for left/right alignment while also ignoring the roll of the ship itself. Without a horizon that is challenging.

So there you have it. There are some real similarities and differences between how Harriers land on amphibs at night to how fixed-wing aircraft land on supercarriers at night—the latter of which you can read all about here. While the Meatball may still be the go-to aid in both cases, new concepts of operation and capabilities are making recovering aboard ships at night a bit easier.

Regardless, as long as humans are at the controls, the Meatball will still be there to lend its guiding light.