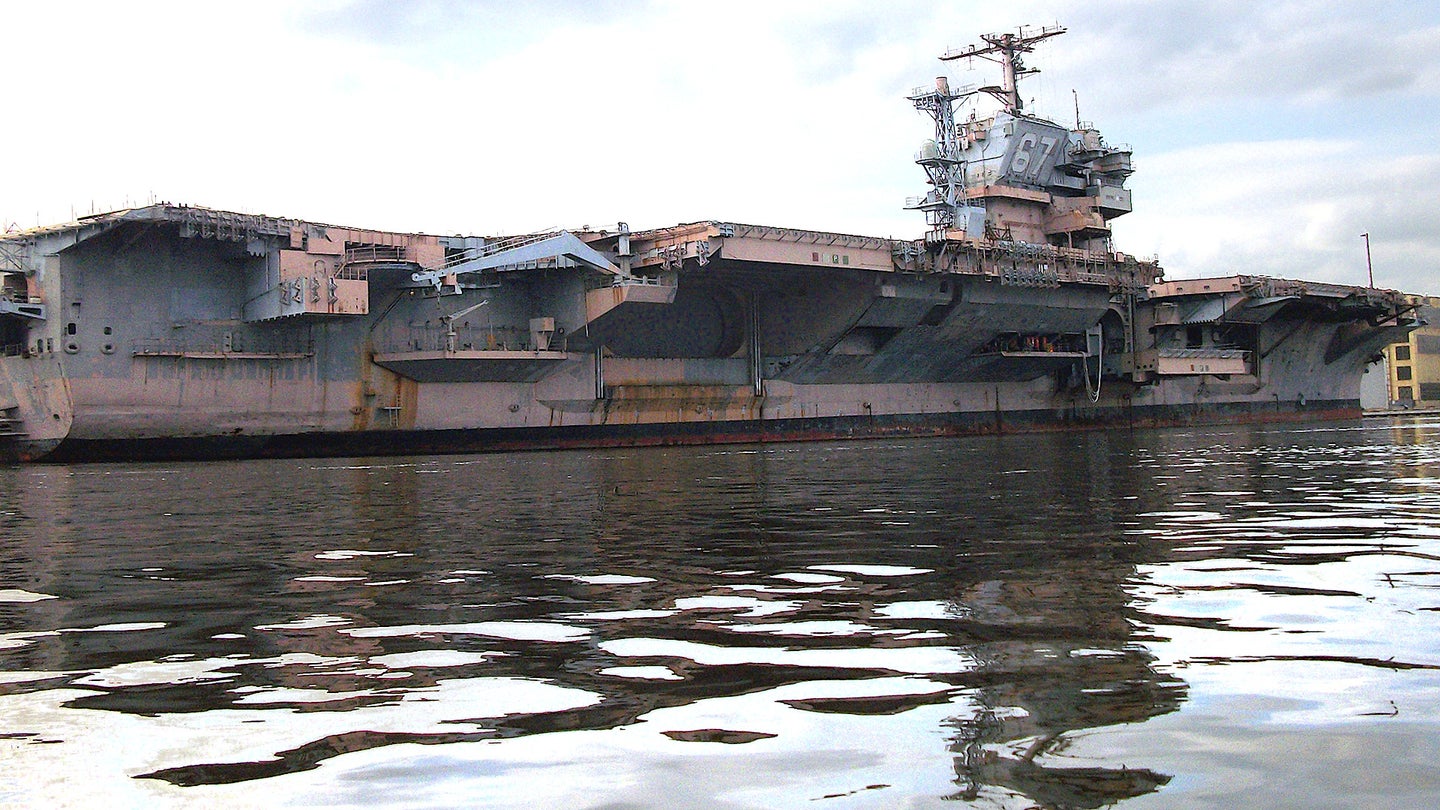 The U.S. Navy has finally sold off what remains of the former aircraft carriers USS Kitty Hawk and USS John F. Kennedy for scrap, letting them go for one cent each. The service decommissioned both ships more than a decade ago but had kept them in mothballs as various groups attempted to secure them to turn them into museums, and there were even some brief discussions about returning Kitty Hawk to active duty. The Navy finally struck them from the rolls for good in 2017 and began prepping them to be broken down.

News emerged just recently that International Shipbreaking Limited, a subsidiary of EMR Group situated in Brownsville, Texas, on the Gulf of Mexico, had secured a deal with the Navy to take the carriers for a total of two cents. Naval Sea Systems Command (NAVSEA) first announced it was actively looking for a contractor to tow away both ships and break them up last year.

“I’ve personally inspected her, so I know she’s in good shape for towing,” Chris Green, a senior manager at International Shipbreaking told The Brownsville Herald newspaper, referring to the former Kitty Hawk. In March, the Navy announced it had put that vessel, which it decommissioned in 2009, into dry dock at the Puget Sound Naval Shipyard and Intermediate Maintenance Facility in Bremerton, Washington, "to remove marine growth from the hull" as part of the process of getting it ready to be scrapped. Work to get the ship ready to leave for Brownsville is expected to begin next week.

The timeline for when the ex-John F. Kennedy, which the Navy retired in 2007, will make its final journey is much less certain. “That process can take a short amount of time or it can take up to six months,” Green said. “It just really depends on their schedules and sometimes they’re really swamped. … I’d hate to put a timeline on the JFK right now just because of those questions marks.”

Selling these two ships, which cost relatively huge sums of money to build, for literal pennies may seem shocking, but often the Navy is the one paying millions more to contractors to take decommissioned vessels away for scrapping, which can be a very complex affair. For instance, the service is looking at a bill of more than $1.5 billion to dismantle the former Enterprise, its first nuclear-powered supercarrier. The total estimated cost to dispose of the hulk of the ex-USS Bonhomme Richard, a Wasp-class amphibious assault ship that was ravaged by a massive fire last year, was pegged at a more modest $30 million. As is evidenced by the time the former Kitty Hawk spent in dry dock earlier this year, as well as the work that apparently still needs to be done on the ex-John F. Kennedy, the Navy has already incurred some costs in disposing of these carriers.

The basic logistics of towing these massive ships to International Shipbreaking's yard underscore just how complicated the whole process is. The ex-Kitty Hawk cannot be towed through the Panama Canal and, as such, will have to be brought all the way around the southern tip of South America to get from Washington State to the Gulf of Mexico. International Shipbreaking's Green said that it could take between 10 and 18 weeks, or between around two and a half and four and a half months, to make the trip. The former John F. Kennedy, which is laid up at the Philadelphia Naval Yard in Philadelphia, Pennsylvania, has a shorter voyage ahead of it. It will take years to fully dismantle both ships.

Whenever the ships finally do make their way to Brownsville, it will mark something of an end of an era. These were the very last conventionally powered aircraft carriers in Navy service and were the last two in the service's possession in any condition.

The Kitty Hawk, the lead ship in her class, was first commissioned into service in 1961 and received various upgrades over the years. This carrier's first major combat outing was in support of the Vietnam War, and it went on to take part in many more U.S. military operations, including the U.S.-led invasion of Iraq in 2003, over the course of its nearly 50-year-long career.

The John F. Kennedy was a one-of-a-kind derivative of the Kitty Hawk class design that was originally intended to be nuclear-powered and that first entered service in 1968. The ship did not see service in Vietnam, but it did support a variety of other missions, including the U.S. response to the bombing of Marine Corps Barracks in Beirut, Lebanon, in 1983 and the first Gulf War in 1991. The carrier and its air wing were called upon to provide combat air patrols after the 9/11 terrorist attacks, and the ship also took part in the early stages of the war in Afghanistan.

The Navy set the John F. Kennedy aside for possible conversion into a museum ship after it was decommissioned. Multiple groups attempted to secure the vessel for this purpose, but none of those efforts was successful.

A number of organizations also attempted to get Kitty Hawk, which had been placed in the service's inactive reserve fleet, leaving open the possibility it could be called back to active duty, released for some kind of public display. In 2017, the Navy did briefly consider recommissioning the ship, which you can read more about here, before shifting gears and instead striking it from the rolls entirely and paving the way for its scrapping. As it stands now, the service has no conventionally powered carriers, though there continue to be intermittent discussions about potentially acquiring such ships in the future, an ongoing debate that the War Zone

has followed closely over the years.

The other two ships in the Kitty Hawk class, the Constellation and the America, were disposed of years ago. International Shipbreaking also scrapped the former Constellation, which first arrived at its yard in Brownsville in 2015. The ex-America was deliberately sunk in 2005 in a unique exercise to gather data about potential vulnerabilities of Navy supercarriers, which you can read more about here.

All of this also makes it very unlikely that another decommissioned Navy carrier will ever end up as a museum. At present, the service only has plans to acquire nuclear-powered types, which it has deemed categorically unsuitable for conversion into attractions for the general public due to how complex their reactor plants make the decommissioning process.

What kind of chance anyone may have to see either of these ships up close before they begin being broken down remains to be seen. International Shipbreaking's Green explained to The Brownsville Herald that they're are contractually prevented from letting groups tour either carrier.

“We had over 1,500 people call wanting to come see [the former USS Constellation] arrive, and we had planned on doing some type of arrival ceremony and having veterans participate, but the numbers just got too big for our ability to handle,” he said, adding that the company was trying to see if officials in Cameron County, where Brownsville is located, might be able to help put something together.

“The carriers are special because they touched so many people’s lives,” he continued. “I’ve heard a whole lot of stories.”

It will certainly make the last voyages for these carriers, which served the United States for decades, all the more somber if there is no way for veterans and other members of the public to welcome them into port one last time.

The Navy’s First Aegis Warship USS Ticonderoga Is Being Scrapped

This historic ship has been awaiting its final fate since it was decommissioned in 2004 after just over two decades of service.