The F-35A is now on a trajectory to become fully certified to deliver thermonuclear weapons in the near future. 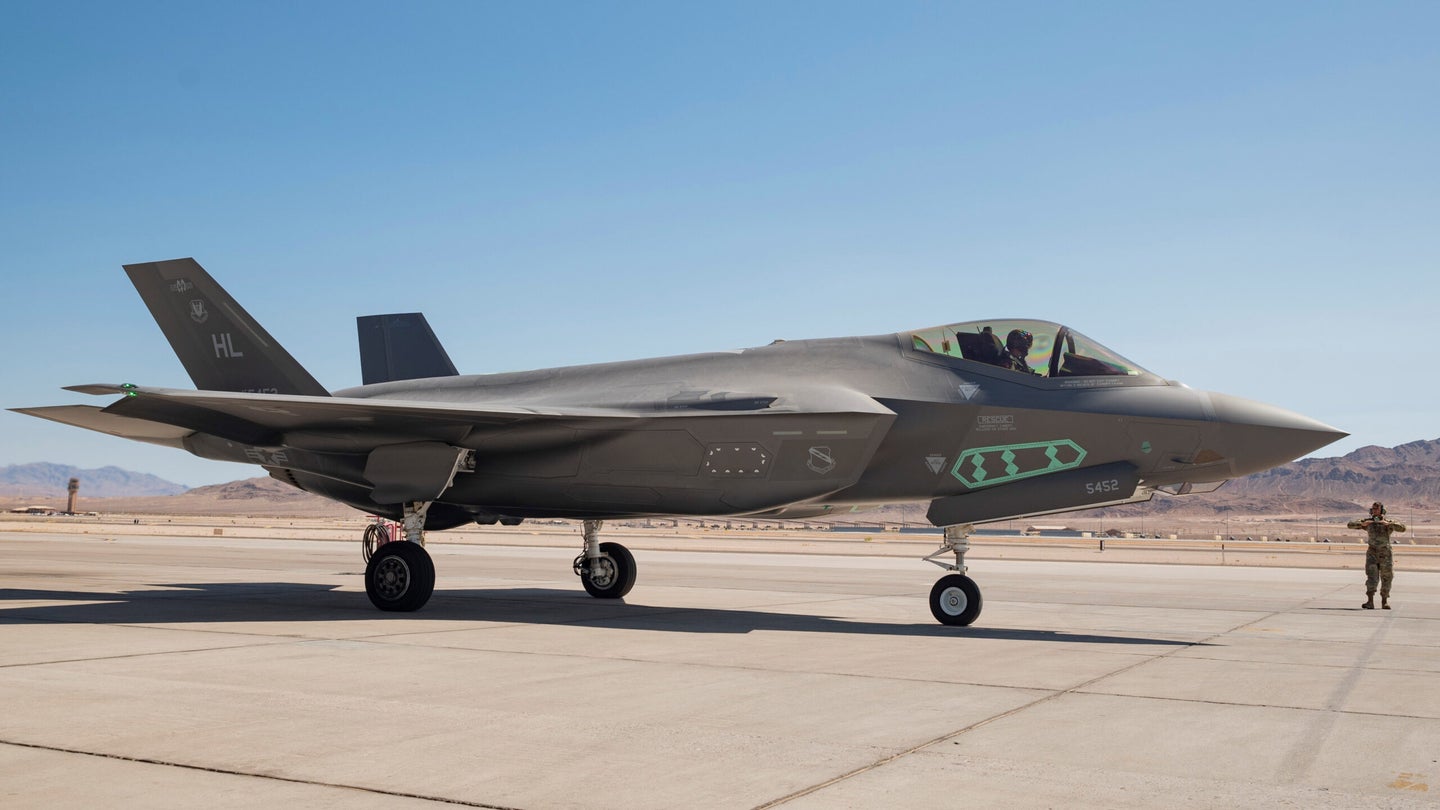 The U.S. Air Force is making progress toward fully certifying its F-35A stealth fighters for the nuclear strike role, armed with the new B61-12 nuclear bomb. Flight tests of the jet carrying the weapon were recently completed, involving the release of what the service described in a statement as “the most representative B61-12 test asset” from an “operationally representative F-35A.” The service has said in the past that the F-35A could start carrying the bombs operationally before the end of next year.

The Full Weapon System Demonstration, the first of its kind for the Joint Strike Fighter in the nuclear strike configuration, involved two Air Force F-35A conventional takeoff and landing (CTOL) variants each dropping a single unarmed B61-12 Joint Test Assemblies (JTAs) over the Tonopah Test Range in Nevada. This range is part of the wider Nevada Test and Training Range and has a rich history of nuclear weapons testing, as well as other sensitive research and development and test and evaluation efforts. You can see a rare video tour montage of the range in this previous War Zone story.

Billed as a “graduation test,” the latest effort was led by the 422nd and 59th Test and Evaluation Squadrons stationed at Nellis Air Force Base, Nevada. Photos released by the Air Force indicate that the weapons launch trial took place on September 21 this year.

Development of the B61-12 has been ongoing since at least 2011, and the new bomb is technically a refurbishment and consolidation of four existing variants, the B61-3, -4, -7, and -10. The B61-12 is characterized by a new tail assembly that features am Inertial Navigation System (INS) precision-guidance package for much-enhanced accuracy. You can read more about the different members of the long-serving B61 family in this past War Zone feature.

According to a statement from the F-35 Joint Program Office, the latest tests involved “high-fidelity, non-nuclear mock B61-12s,” and each weapon was dropped at a different altitude and speed. The actual launch parameters of the tests were not revealed, but we do know that, in the past, at least one F-35A has dropped a test B61-12 at supersonic speed, an event you can read more about here.

Video of a test from last year in which an F-35A dropped a B61-12 test round over the Tonopah Test Range:

In the meantime, data gathered during the latest test at Tonopah will be assessed by the Department of Defense and Department of Energy, to ensure the B61-12 and the F-35A meet all performance requirements.

The Air Force says that no date has been set for full F-35A nuclear certification, at which point the jet will be determined able to deploy the B61-12 in support of real-world operations. The service does, however, note that the integration process is set to “remain on track for future timelines.”

However, the B61-12 capability will only be realized by F-35A units that are earmarked for the nuclear mission, likely to be spearheaded by the current F-16C/D units deployed in Europe that will continue their DCA mission when they transition to the Lightning II.

Adaptations for that mission concern not only the hardware and software changes required on the jet itself to prosecute it, but also the appropriate training of aircrew and maintainers, plus various support and security infrastructure at the relevant bases.

The nuclear strike role will likely be performed not only by the U.S. Air Force but also by certain F-35A export customers within NATO, which could be provided with access to U.S.-owned nuclear bombs, as is currently the case for Belgium, Germany, Italy, and the Netherlands. Of these, all but Germany are buying F-35As.

Interestingly, the Air Force is also now pitching the nuclear-armed F-35A as a more strategic weapons-delivery platform, as well as being a tactical strike asset. This is likely the result of a few different factors. First, there is the increased accuracy of the B61-12, thanks to its precision-guidance system, combining the aforementioned INS package tail kit and rockets that give the weapon spin stabilization. This guidance also allows the weapon to be launched from dozens of miles away from its target area, increasing survivability. This, paired with the F-35A’s well-reported stealth attributes, allows for better-defended targets to be attacked. It also has a sizeable combat radius for a tactical fighter. Furthermore, unlike its forebears, the B61-12 is designed from the outset for carriage by strategic (bomber) and tactical (fighter) platforms.

Speaking to Air Force Magazine, meanwhile, Air Combat Command deputy director for strategic deterrence Lieutenant Colonel Douglas A. Kabel said, “It makes our potential adversaries think more about their game plan before launching it. [The F-35A] can get closer to, further inside a combat area that may otherwise be impossible for non-stealth assets.”

Perhaps not coincidentally, the Air Force is already developing tactics that would see the nuclear-capable B-2 stealth bomber work alongside the F-35A in contested airspace — using their respective attributes to defeat the air defenses of a potential peer or near-peer enemy.

“The B-2 bomber was the prominent nuclear-capable stealth aircraft,” said Lieutenant Colonel Jackson. “Adding ‘nuclear capable’ to a fifth-gen fighter that already brings several conventional-level capabilities to the table adds strategic-level implication to this jet.”

However, the B61-12 won’t just be carried by the F-35A. In June last year, it was announced that the B61-12 had been demonstrated as being fully compatible with the F-15E Strike Eagle, followed by the B-2 Spirit stealth bomber later the same month. Ultimately, the future B-21 Raider bombers will also be armed with the new bombs, and at least a portion of the F-16C/D fleet is also planned to carry them. As part of NATO nuclear sharing commitments, it seems likely that Germany will seek to add the B61-12 to its planned F/A-18E/Fs, as well.

Video of the F-15E Strike Eagle performing B61-12 development work over the Tonopah Test Range:

But the B61-12 program has already suffered notable delays and cost increases, and there are also budgetary considerations, with the entire program costing around $10 billion, making the average cost per bomb at around $27,500,000. To that figure needs to be added potential cost increases. For example, hundreds of millions were needed to pay for commercial-off-the-shelf capacitors for both the B61-12 and the W88 ALT 370 warheads used in the U.S. Navy’s Trident D5 submarine-launched ballistic missiles. These replaced previous items that had cost just $5 apiece.

With that in mind, although the process of integrating the B61-12 on the F-35A seems to be progressing well, that’s not to say there won’t be more costs involved in getting this new weapon issued to frontline units.

Though an ‘open secret,’ the Belgian government does not confirm or deny it hosts these weapons, which its F-16 fighter jets could carry in a crisis.