The Russian Ministry of Defense's official television station, TV Zvezda, recently offered the most in-depth look at the Sukhoi S-70 Okhotnik unmanned combat air vehicle, or UCAV, as well as the work that has gone into it, to date. This includes new views of various features on the drone, including its internal payload bays and the control setup that operators use to fly it, along with behind-the-scenes looks at various aspects of its design and manufacturing process.

TV Zvezda's "Military Acceptance" program was given an inside look at elements of the Okhotnik, or "hunter" in English, for a segment that aired this past weekend. The title of the episode, which you can watch in its entirety on YouTube in Russian below, says that this is "chapter 1," indicating that that the show already intends to come back to this topic with additional information in the future.

The Russian military first officially unveiled this very large combat drone, which is really more of a demonstrator than even a prototype, in 2019 after its first flight, though unofficial images had already emerged on social media. Since then, only relatively limited details about the design and its development, as well as accompanying imagery, have been released.

Only one of these drones has been completed so far, but at least three others are reportedly under construction. In the TV Zvezda segment, officials from Sukhoi described this drone, which presently carries the bort number Red 071, as a "laboratory," a Russian term commonly used for testbed assets. Previous Russian state media reports have said that the second example now being built is set to be used primarily as a research and development asset, just like the first one. The third and fourth examples will reportedly be more representative of a final production design.

One of the things about the core S-70 design that is most immediately apparent from the footage in the show is just how big this UCAV really is, something The War Zone

has highlighted before. TV Zvezda's reporter says that Okhotnik is smaller than Sukhoi's Su-57 Felon advanced combat jet. However, a clip where he walks from the wing of one of those manned aircraft onto the drone shows that the size difference, especially in wingspan, is minimal. The particular Su-57 seen in this portion of the segment, and others, is one that has been used in various testing in cooperation with the S-70. Among other things, the production versions of the Okhotnik are expected to eventually operate as semi-autonomous "loyal wingmen" networked together with Felons.

We are also treated to new, close-up looks at the exterior of this flying-wing drone. This includes views of its upper body, which is covered in various intakes and exhausts, as well as antennas, and a forward-facing camera system under the central part of the forward fuselage.

There are also nice views of the UCAV's very exposed engine exhaust. This is something that The War Zone

has noted would limit its all-around stealthiness since the very first images of this unmanned aircraft emerged back in 2019. The Okhotnik's overall surface is hardly flush, either, with various exposed fasteners and seams that would negatively impact its radar-evading qualities.

We also get a look at the S-70's internal bays, which TV Zvezda's reporter said the channel was prohibited from filming inside. It's unclear what, if any, weapons or other internal payloads have been flight tested on this initial example of the Okhotnik so far, but there were reports that the drone had carried some kind of air-to-air missile surrogate during an experiment late last year.

Beyond the new views of the design, an official from Sukhoi elaborates more on how technology, and even some entire components, from the Su-57 was leveraged to help accelerate the development of the S-70. The drone uses the same main landing gear assemblies as the manned aircraft, for instance.

Sukhoi says the S-70 is expected to change significantly, inside and out, between the first two examples and the next two. The most notable expected difference will be the replacement of the exposed rear engine exhaust with a shrouded one, as has been seen previously on models. The intake on those models is also revised compared to what is seen on the Okhotnik that is currently flying. The production examples are also expected to make significant use of composite materials. This would all, at least in principle, help reduce the unmanned aircraft's radar signature.

It's also worth noting that it would be highly unlikely that the expected new exhaust configuration on the production-representative S-70s would be able to accommodate an afterburner. Sukhoi representatives did specifically tell TV Zvezda that the UCAV was not expected to be overly fast or maneuverable, relying more on its stealthy characteristics to successfully complete its assigned missions.

Beyond all this, at one point in the segment, the reporter from "Military Acceptance" is shown various computer models related to the S-70 and its aerodynamics, including one that appears to show a deep S-shaped engine intake on the drone. It's not clear if this is a feature on the current demonstrator or the second one in production, or if it is expected to be added to the final design. Either way, this kind of ducting, something that is very prominently not found on the Su-57, helps conceal the engine's fan face, which would otherwise produce a very large radar signature.

Sukhoi touted its use of modeling and digital simulation in the development of the drone, in general. At one point, a representative from the company showed the reporter from "Military Acceptance" a rig used to test the unmanned aircraft's flight software. The system includes a full physical control system from an S-70 linked to a simulator made up of commercially sourced components. This includes a visual interface with a 3D rendering of a flying wing-type aircraft that Sukhoi insisted was nothing more than a stock graphical asset. The way the system works is that the physical controls are supposed to respond to the tester's inputs in the simulator as they would on the real drone, allowing engineers to see if things work as intended, albeit in a very rudimentary laboratory environment.

Separately from its exploration of the S-70's design and the development thereof, this episode of "Military Acceptance" also offers a look into the current operator arrangement for the drone. It currently takes a three-person team to fly the Okhotnik, consisting of a pilot/operator, navigator, and communications specialist, all of whom work together inside a containerized control van.

The pilot-operator sits in a position that is intended, in broad strokes, to mirror the cockpit of an aircraft, with a traditional control column and various multifunction displays. A view of what is in front of the drone is provided via feeds from its two forward-facing video cameras, which have heads-up-display-like iconography overlaid on top. The navigator and communications positions feature more conventional computers, with the navigator notably also able to view many of the same displays as the pilot/operator.

This control arrangement is expected to evolve as time goes on, as well, with many of the more traditional plane-like components of the pilot/operator position giving way to simpler displays and computer screens. No details were given about how a pilot of a Su-57 might be expected to interact directly with one of these drones in flight.

The plan is for the operation of the drone to become increasingly autonomous, as well. The degree of autonomy currently found in the S-70 is not entirely clear, but it does reportedly have the ability to conduct some level of flight without constant human interaction and has an emergency backup mode to help it get back to base if its connection to the operator is lost for any reason. Still, the expectation, at least a present, is that there will continue to be a human in the loop, at least on some level, when operational Okhotniks enter service.

This operating method would severely limit how future S-70s could be employed, potentially forcing them to operate within line of sight to the ground control station or to intermediate communications relay nodes. Russia is not particularly well known for high-speed, beyond-line-of-sight data links, in general. A desktop-like, point-and-click touchscreen user interface that allows various types of commands to be issued would be another key feature for truly semi-autonomous operation of the S-70 in the future.

All told, it very much remains to be seen what the production-ready S-70 design will look like, as well as when Okhotniks may actually start seeing real service. The Russian Ministry of Defense currently hopes to begin fielding its first operational examples in 2024. There is, of course, always the potential for delays due to various reasons, including just basic budgetary realities. It seems clear Sukhoi has been trying to leverage work on the Su-57 to help mitigate such risks. However, the production of those jets, as well as their initial development, has been something of a saga, as you can read more about here, and it remains unclear when, or if, Russia will field any significant number of them or in what capacity.

With the development of and expected concepts of operation for the S-70 so heavily tied to the Su-57, this can only raise questions about the future of the drone. Using Okhotniks as loyal wingmen could offer one possible way to expand the real combat capacity of what might ultimately only be a small fleet of operational Felons. If the Russians are able to turn the models of the Okhotnik in the stealthier configuration into a reality, then these UCAVs could also help make up for the Su-57's radar-evading shortcomings, as well, a valuable potential synergy that The War Zone has pointed out in the past. It's not clear what impact the expectation that the S-70 will be slower and less maneuverable than its manned partners might have on any future manned-unmanned teaming.

Of course, these drones could also be employed on their own as true UCAVs if the control arrangement eventually allows for it. As already noted, the current focus on human-in-the-loop operation presents obvious limitations on how the S-70 can be used, including how far away it can operate from its controller, whether they're on the ground or in the air.

No matter what, this latest episode of TV Zvezda's "Military Acceptance" program is certainly a fascinating new look into the S-70 program, and we are already very interested to see what details future "chapters" might contain.

It has come to our attention that TV Zvezda has also released looks at components of the planned stealthy engine exhaust for future, production-representative S-70 drones, which you can see in the Tweet below. 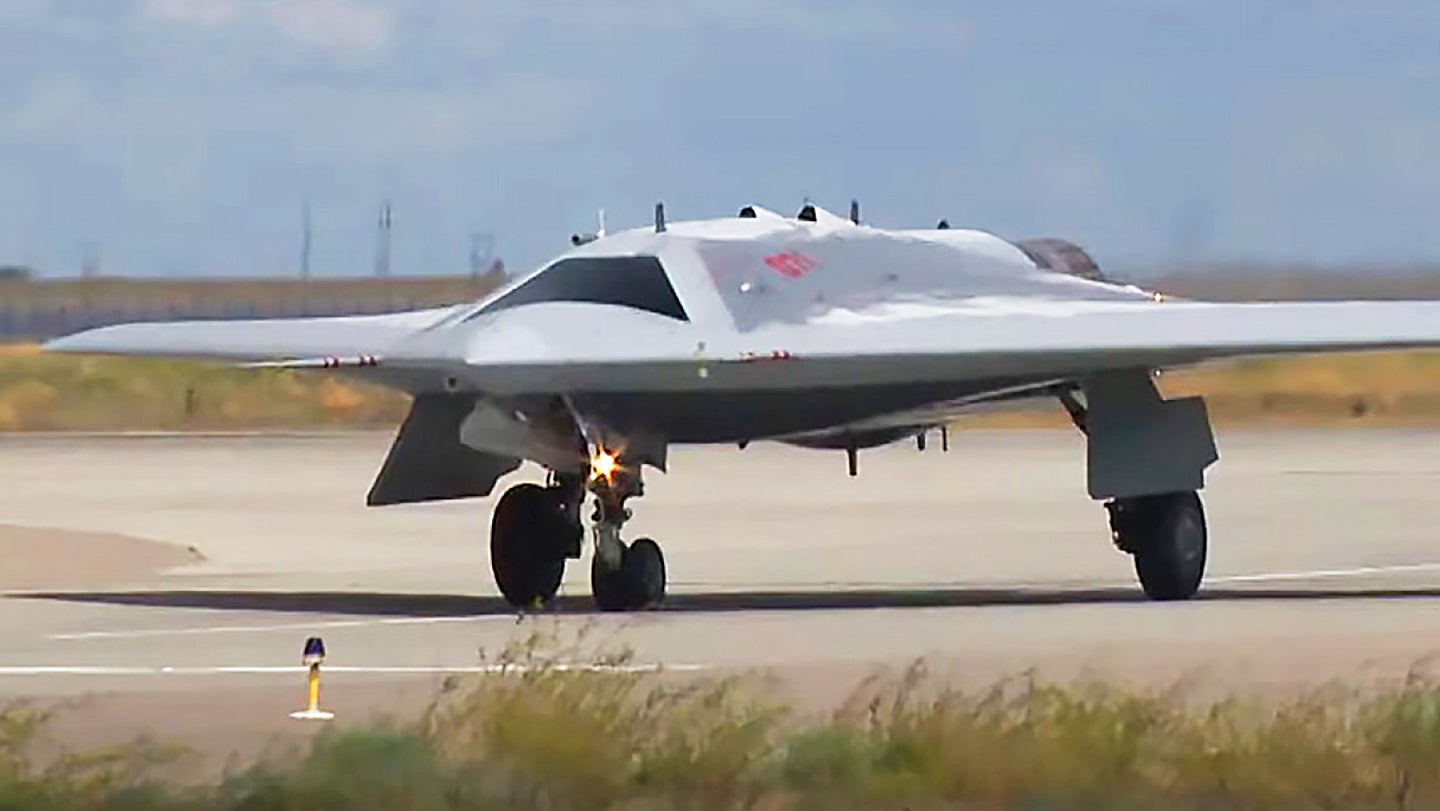 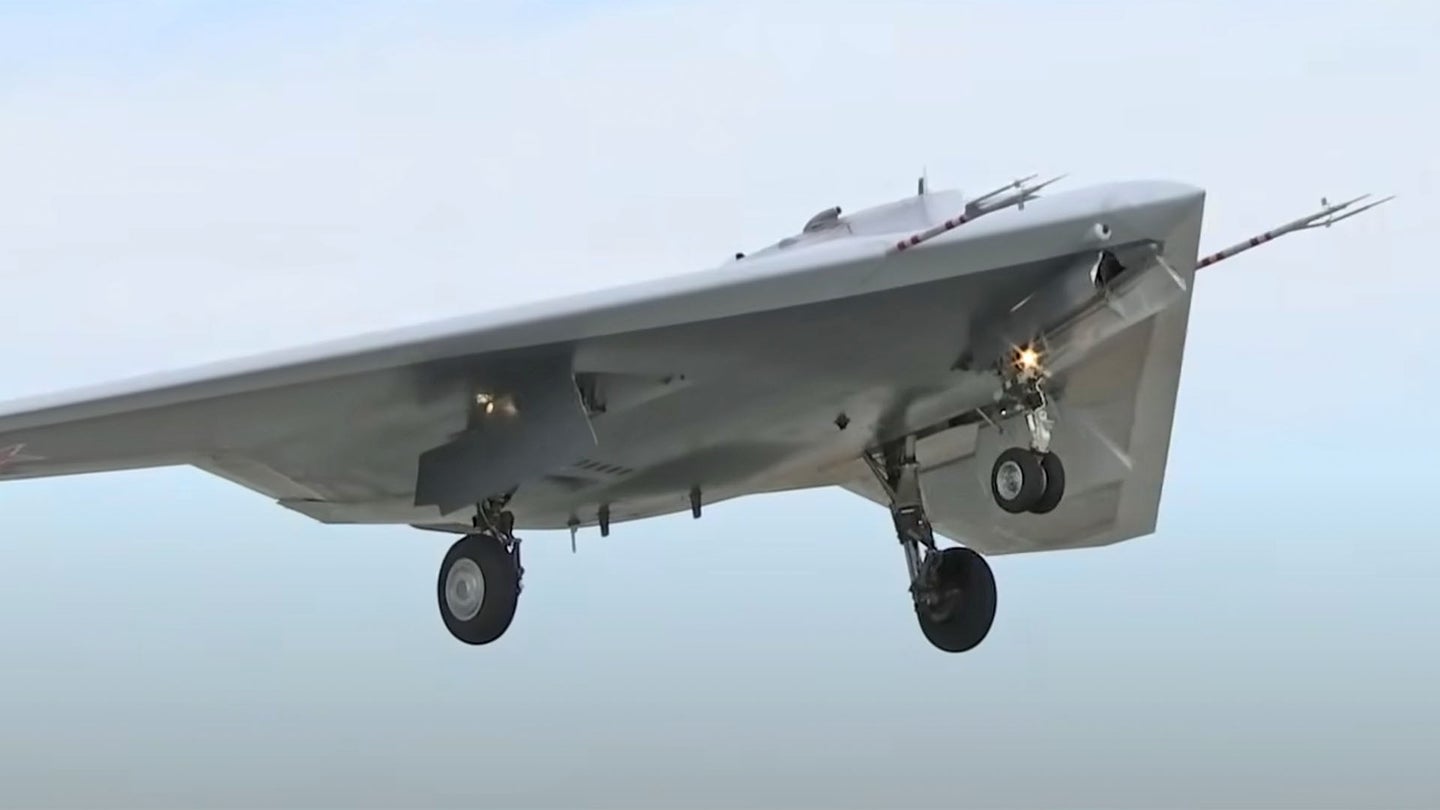 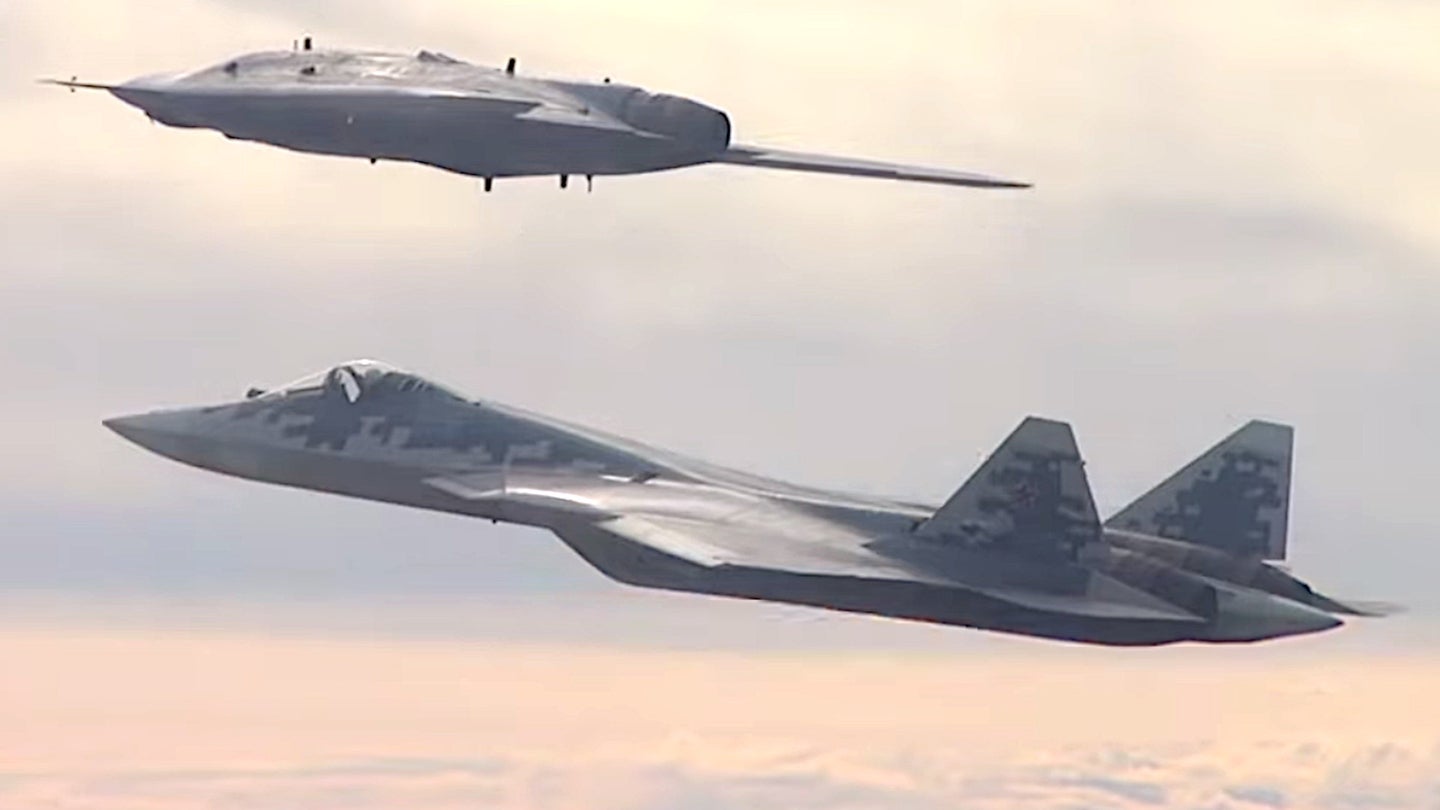