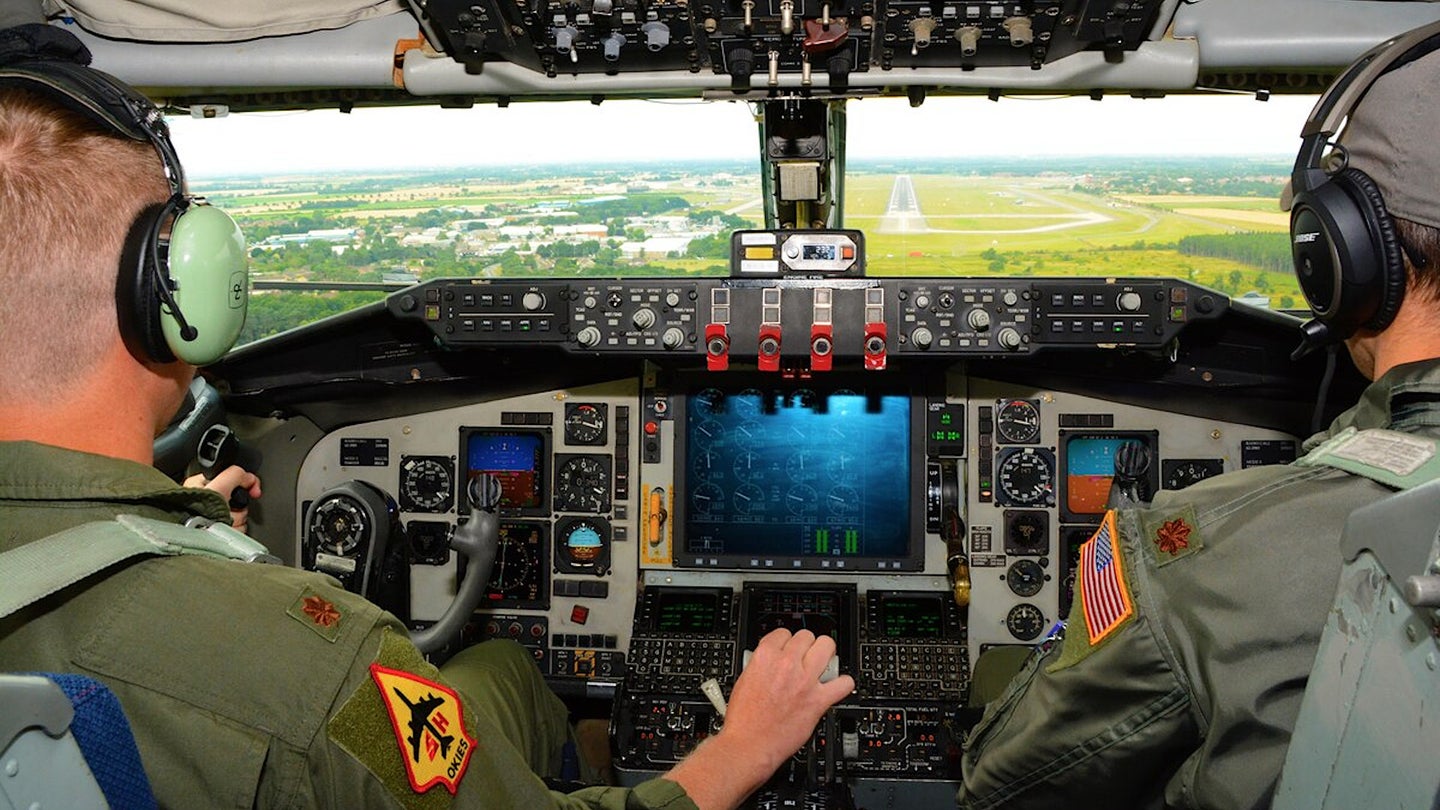 Crews on U.S. Air Force KC-135 tankers with the Block 45 upgrade package have been prohibited from engaging the aircraft's autopilot at altitudes under 10,000 feet, except in very certain circumstances, due to a curious chain of events. Air Mobility Command imposed this restriction after receiving reports of at least two instances where the nose of one of these aircraft suddenly pitched down with the autopilot engaged, a potentially very dangerous occurrence. A subsequent investigation initially indicated that the autopilot might have been switching off entirely unexpectedly, but the Air Force now says it is confident that the system has actually been working as intended and plans to rescind the current flight restriction within days.

Air Force Major Hope Cronin, the Public Affairs Operations Division Chief for Air Mobility Command (AMC), confirmed that the restrictions on the use of autopilots on Block 45 KC-135s under 10,000 feet are still in place and provided additional details about the investigation into the issues that prompted them in the first place. The War Zone had reached out to AMC after examining an unclassified Flight Crew Information File (FCIF) notice, which appears to have been first issued sometime between April and May of this year, detailing the flight restrictions imposed after the reported "uncommanded pitch down" incidents.

A new autopilot is a key component of the Block 45 upgrade package, which you can read more about here. Since the mid-2010s, the Air Force has had many of its KC-135s brought up to this standard, and the upgrades are also available to foreign operators. What was then Rockwell Collins developed the complete package, which has since been supplied in kit form for installation on KC-135s. In 2018, United Technologies Corporation bought Rockwell Collins, which now operates as Collins Aerospace.

The prior block 40 KC-135R's autopilot was extremely basic, with no auto level-off, airspeed hold, or vertical speed hold for climbs and descents. As such, some KC-135 pilots were excited to get these functions as part of the Block 45 upgrade, but have been dismayed with the system, which was not cheap to procure, after it was put into limited use due to the pitch down events. The lack of an autopilot under the current restrictions is especially an issue when flying at lower altitudes for prolonged periods of time or when recovering after extremely long missions.

The FCIF, which came from Air Mobility Command's Directorate of Operations, Aircrew Standardization, and Evaluation, or A3V, said that restrictions on using that autopilot were first put in place after "two recent incidences in Block 45 [KC-135] aircraft where the autopilot initiated an uncommanded pitch down."

"In both cases the pilot and copilot were unable to disconnect the autopilot using the TOGA [takeoff/go-around]/disconnect switch or stabilizer trim inputs," it continued. "One incident occurred at 2,500 feet AGL [above ground level] in the traffic pattern. The cause of the two events remains unknown."

No details are provided about how steep the reported pitch downs were or how long it took for the aircraft's crew to regain full control. Any such occurrence could have had potentially dangerous implications, particularly for aircraft flying at lower altitudes. This, in some indirect ways, is reminiscent of the now-infamous issues with the Maneuvering Characteristics Augmentation System (MCAS), a flight stabilization system, onboard Boeing 737 MAX airliners that also produced uncommanded nosedives that were key contributing factors in two separate fatal crashes, which killed nearly 350 people in total, in 2018 and 2019. After the second of those accidents, aviation regulators around the world ordered the jets grounded and they only began returning to the skies late last year. The entire debacle became a major scandal for Boeing, which was shown to have been less than forthcoming about what it knew beforehand regarding the system's potential risks.

With regards to the Block 45 KC-135s, the FCIF said that crews were prohibited from engaging the autopilot at altitudes under 10,000 feet, "unless required for an approved test plan, functional check flights, an RNAV [area navigation] departure, or during air refueling." It also included a list of troubleshooting options if the pilot or copilot had trouble disconnecting the autopilot, with the last suggested option being to pull a circuit breaker.

However, the Air Force says that its investigation into this matter has not found any issues with the autopilot itself and that data it collected indicated these systems weren't even engaged during the reported uncommanded pitch downs. This had, in turn, led to concerns that the autopilots might be switching themselves off inadvertently, something the service has said does not appear to have been the case, either.

"The investigative team discovered the autopilot did not in fact command a pitch down," Major Cronin said. "Analysis was accomplished on flight data recorder and autopilot servos, resulting in conclusions that the system functioned as designed and that autopilot was not actually engaged during this timeframe."

"Our engineers and maintenance teams are working to determine the cause, and thus far have been unable to duplicate this issue or had it take place on other modified aircraft," Air Force Captain Christopher Herbert, another AMC spokesperson, had also told The War Zone in response to an initial query regarding this issue. It is worth noting that the mention of the troubleshooting done in a simulator as mentioned in the FCIF only described an "attempt to replicate one of the incidences," not a definitive recreation of the reported problems with the autopilot.

As it stands now, AMC says they expect to finally lift the autopilot-related flight restrictions entirely this Friday. This is the only flight restriction currently in effect for Block 45 KC-135s. Still, with no real explanation about what caused the reported pitch down incidents that prompted the issuing of the FCIF in the first place, the entire matter remains somewhat puzzling.

"A survey was created to gather pertinent data on any issues that may not be covered by data gaps in flight recorder," Major Cronin said. "Crews have been encouraged to continue reporting any issues they have via safety, maintenance, and standardization and evaluations channels."

Hopefully, no new reports of uncommanded pitch downs will emerge and the previous incidents will remain bizarre flukes that thankfully did not lead to any accidents. On the other hand, if they continue to occur, the service isn't in much better of a position to explain them than they were months ago.