An intriguing new high- and far-flying Chinese drone design has been seen in full scale on the grounds of the upcoming Zhuhai Airshow. 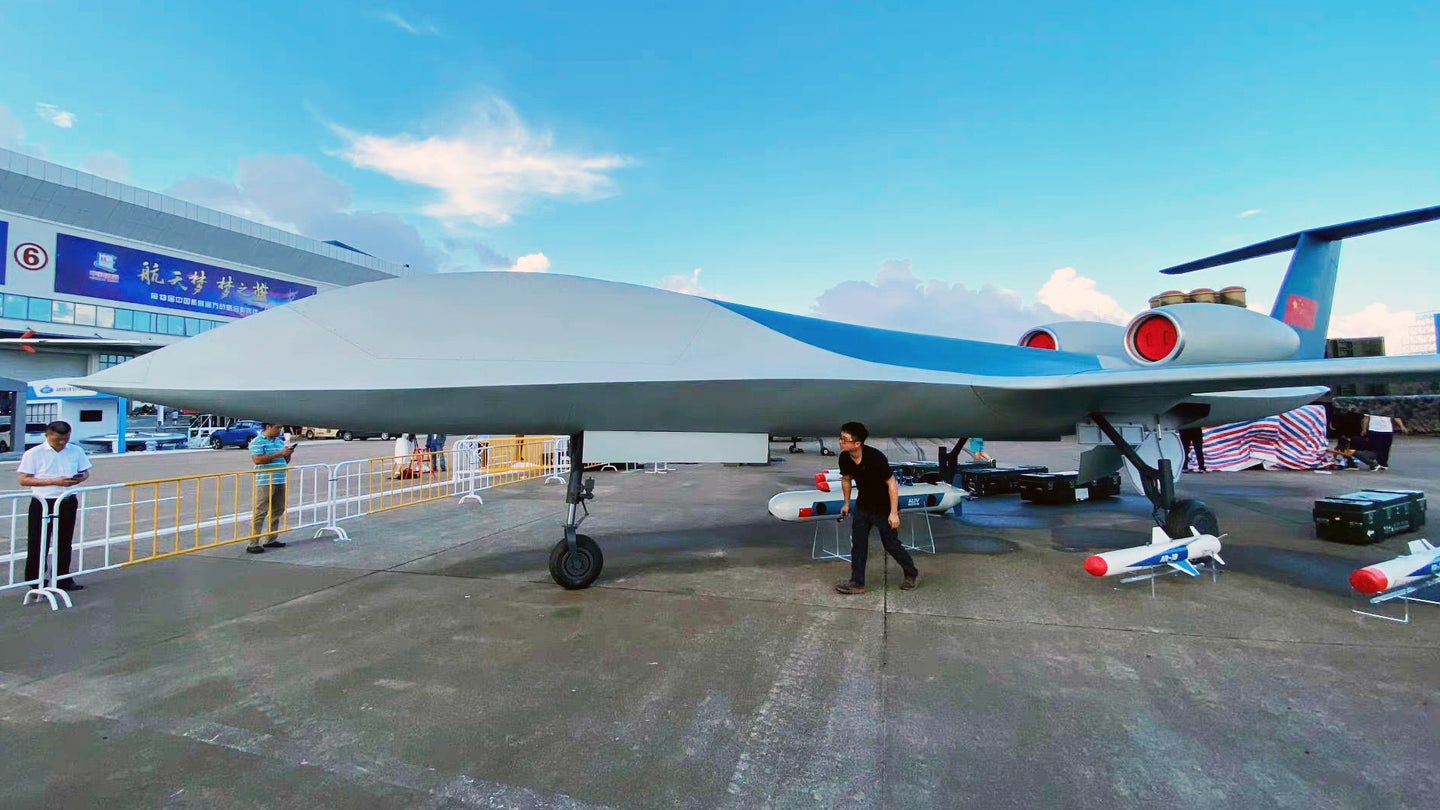 China's big international airshow in Zhuhai hasn’t even officially kicked off yet, but we are already getting a peek at what is going to be displayed there. One new development is China's J-16D electronic attack jet being seen with jamming pods for the first time. Now we are getting our first lifesize view of the China Aerospace Science and Technology Corporation's Cai Hong (Rainbow) 6, better known by its designation CH-6. It is a long-endurance, twin-jet engine, multirole drone. In the past, we have only seen models and low-fidelity renderings of the design.

The CH-6 is considered to be a high-altitude, long-endurance (HALE) unmanned system designed for intelligence gathering, support, and strike roles. It looks almost something like a drastically enlarged CH-5, but its rear configuration is very different from that earlier design. It has a high T-tail setup, with two jet engines installed atop the tail section side-by-side. The drone's mid-set long wings are also a bit swept and the entire package sits atop tall landing gear. The aircraft also has a notable chine-line-like edge that wraps around its ellipse-shaped fuselage.

According to China-Arms.com, which claims to have the basic information that will be displayed about the CH-6 at the airshow, its stats include:

The CH-6 seems to be situated in a capability space between its medium-altitude, medium-endurance, unstealthy unmanned combat aircraft brethren — as well as China's long-endurance, medium-altitude, propeller-powered surveillance types — and more advanced high-altitude, long-endurance intelligence-gathering and sensor craft jet-powered drones. The fact that it will be capable of being armed from the outset is a clear indication that the People’s Liberation Army Air Force is looking to push its unmanned kinetic capabilities farther afield than what is possible now.

The aircraft’s jet speed will favorably impact transit times to patrol or target areas and maximize its endurance once there. Two engines would increase reliability, as well, which could be key considering the distances involved with operating an aircraft like this and the less-developed state of Chinese jet engine technology. In fact, the most similar of China’s unmanned aircraft we know of to the CH-6 is probably the Cloud Shadow. It is a single jet engine design that also has a lot in common with previous Chinese propeller-driven combat drone designs, but is smaller and lighter than the CH-6. Both aircraft can accomplish surveillance and kinetic missions, but the CH-6 would likely be even better suited for the former due to its size and weight, allowing multiple sensor systems — and large ones at that — to be carried over long distances and at higher altitudes.

As far as the United States goes, the closest thing to the CH-6 is probably General Atomics' Avenger, although the CH-6 puts less emphasis on low-observability in its design and appears capable of higher altitude operations for some mission types. The Avenger could probably be better classed as somewhere between the CH-6 and Cloud Shadow, in limited respects. Also, the CH-6 is a simpler overall design.

This is a big deal, as it could provide China with an 'everyday' high-altitude, long-endurance platform that is not very sensitive in nature or expensive to procure and operate. It can be a platform that potentially provides a kinetic punch but can also haul around larger sensors and other payloads when required, all with twin jet engine reliability. Once again, this would fill the unmanned flying ‘sensor truck’ gap that exists between aircraft like the more advanced jet-powered Soar Dragon and the lower-performance propeller-powered TB-001. Being far from exquisite, especially compared to some of the stealthy unmanned aircraft China is currently pursuing, means that the CH-6 can also probably be bought, and even lost, in significant numbers.

With that in mind, the CH-6 may not be sexy or cutting-edge, but it could prove to be extremely important to the PLA's long-range ambitions.